7 Worst Post-Dinner Habits for Your Waistline

You might just be undoing all that hard work you're putting in to drop those unwanted pounds.

When you're working hard to stay on track with your weight-loss goals, you want to make sure you're not unknowingly doing anything that is, well, undoing all the progress you made. You might not realize it, but it's much easier to do this than you may think! So to make sure you're doing all you can to stay on course, we're taking a look at your habits. Specifically your post-dinner habits.

That's right—there are some post-dinner habits you may have that could easily be a reason why you're not dropping those pounds the way you should be. Check out the full breakdown below so you know what not to do and be sure you're not guilty of any of these 45 Breakfast Habits Making You Gain Weight, either.

First thing first—there is such a thing as a wrong time for dinner. That one decision could be a game-changer! According to a study published in Appetite, those who eat later at night are more likely to gain weight when compared to those who ate earlier. And why is that? Well, the study found that those who eat later were more likely to binge as hadn't eaten since lunch, and as a result, chose unhealthy foods that are high in sugar and fat. That's where the weight gain comes into play if you're doing this every night. Plus, a study in Obesity Society showed that eating dinner earlier in the day can help with weight loss for one major reason: you then have more time to burn off the calories.

If you're looking for more helpful tips, be sure to sign up for our newsletter to get daily recipes and food news in your inbox! 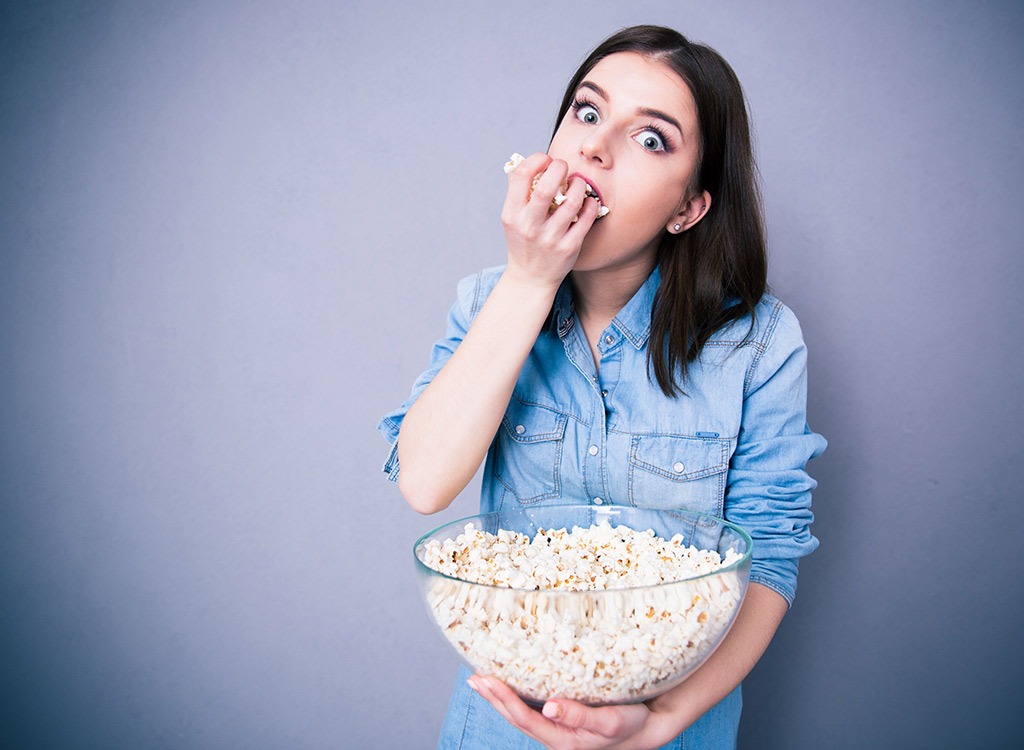 If you find yourself wandering into the kitchen after dinner for snacks over and over again, this is an easy way to get the pounds to rack up.

"When we are grazing every hour or so, the body doesn't quite get the chance to settle down in between eating occasions, which can be a lot for your blood sugars and other hormone levels," Casey Seiden, MS, RD, CDN, DCES told us in a previous article. "Constant snacking also leads me to suspect that your meals are lacking in some fiber, protein, or fat to keep you feeling fuller for longer."

Tend to find yourself scrolling on your phone before you try to head off to sleep after dinner? Well, that could be causing you to pack on more pounds. A study in Pediatric Obesity found that students who had access to one electronic device in their bedrooms were more likely to be overweight compared to those who didn't have a device in the bedroom. And think about it, when you're awake mindless scrolling, you're more likely to then just start mindlessly eating while you scroll. A vicious cycle!

It should come as no surprise that if you're up late scrolling, there's a good chance you're not getting enough sleep. This lack of sleep can lead to weight gain. See, according to a study done by Wake Forest researchers, participants who slept five hours or less ended up putting on two and half times more belly fat, while those who slept more than eight hours didn't pack on as much weight. Getting adequate sleep is always the key!

After dinner, your go-to move might just be to sit on the couch to watch some Netflix. Even if you have plans to go out for a walk later, you're going to want to do that sooner than you may think. One study found that going for a 30-minute walk immediately after eating a meal leads to more weight loss. So go ahead and get on a walk right after you're done eating dinner, instead of just melting into the couch for the evening. Add this post-dinner habit to the list of life-changing diet hacks for weight loss!

Sometimes, it's really hard to avoid that craving for a post-dinner treat. Leave the junk food behind and instead go for protein-rich, high-fat foods. Think some almonds or even string cheese. This way, you're not choosing any carbs and you're going to instead actually end up increasing the amount of fat-burning hormones that are released while you're asleep. Sounds like it's time to add this to your list of post-dinner habits, right?

Having the wrong room temperature set

If you're just relaxing in your room after dinner, reading a book, or even getting ready for bed, you'll want to adjust the temp. A study in Cell Press found that being exposed to a mildly cold room is beneficial for weight loss. Researchers found that participants who stayed in colder temperatures for six weeks saw a significant decrease in body fat. So adjust the thermostat to around 62 degrees, and watch those pounds melt away.

Eat This, Not That!
Inspired by The New York Times best-selling book series, Eat This, Not That! is a brand that's comprised of an award-winning team of journalists and board-certified experts, doctors, nutritionists, chefs, personal trainers, and dietitians who work together to bring you accurate, timely, informative, and actionable content on food, nutrition, dieting, weight loss, health, wellness, and more. Read more about Eat This
Filed Under
Tips // Weight Loss