Slapping a "Lighter Fare" label on these restaurant dishes is like putting lipstick on a pig: the phrase certainly makes the dishes sound healthier, but the branding is just a futile attempt to disguise the true waist-widening nature of these belly-busting meals.

Picture this: It's the end of a long work week, you finally turned in that project that you've been working on for days, you just picked the kids up from their respective athletic practices, and you're exhausted. Instead of hauling everyone over to the grocery store and trying to create a meal that will please everyone while still fitting into your flat-belly diet plan, you decide to just take everyone out to a restaurant.

It's not a terrible move. Not only are chain restaurants offering healthier meals (like these #1 Healthiest Menu Option at 40 Popular Restaurants), but they're making it easier to find them on menus by branding dishes with their respective "Healthy Choice" labels. There's just one problem: not every meal that carries this seal of approval has actually earned it.

That's because nutrition is about more than just calories—it's also defined by nutrient content—which is an issue since the only standard restaurants use to designate healthier options is that they're low in calories. In reality, many of these "smart alternatives" are just as high in sodium, added sugars, and fat as the restaurants' standard fare. That's why we're taking a closer look at the menus of America's most popular chains and naming the worst health halo offenders. To further your nutritional vigilance, also watch out for these 35 Restaurant Foods With Crazy-High Amounts of Sugar.

Because They're… High in Sodium 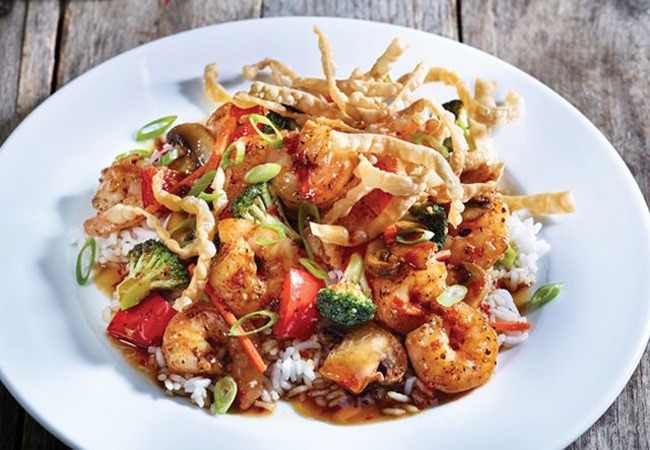 We know we might break your heart by revealing that some of your favorite "healthy" dishes as diet saboteurs in disguise, but you might forgive us because this dish is committing a different kind of heartbreak. Americans who eat a diet high in sodium have about twice the risk of death from heart disease, according to the CDC. And this one dish serves you up more than what the USDA recommends consuming in an entire day. 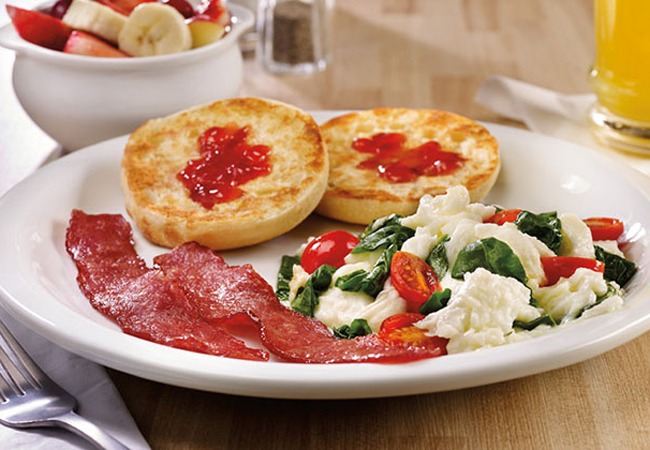 We've got a couple of bones to pick with this Denny's dish. For starters, swapping out whole eggs for egg whites is one of the 18 "Healthy" Swaps That Aren't Actually Better For You. That's because the yolk is one of the richest sources of the fat-fighting micronutrient, choline, so opting for whole eggs can actually help you trim down. And secondly, this dish commits a flat-belly cardinal sin: it's loaded with more belly-bloating sodium than you should consume in more than a day. To put it in perspective, that's the sodium equivalent of eating 117 mini Rold Gold twisted pretzels! 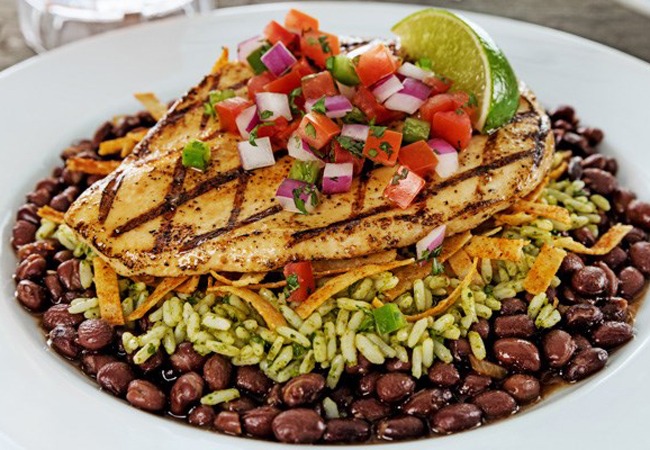 This margarita-marinated grilled chicken breast, citrus-chile rice and black beans may be a great source of protein and fiber, but it also has more sodium than the USDA recommends you consume in an entire day. Chili's certainly loves their salt shaker. Now, it's not so surprising that the restaurant also serves the saltiest dessert in America. See the others in our exclusive report: 20 Restaurant Desserts with More Salt Than a Bag of Pretzels. 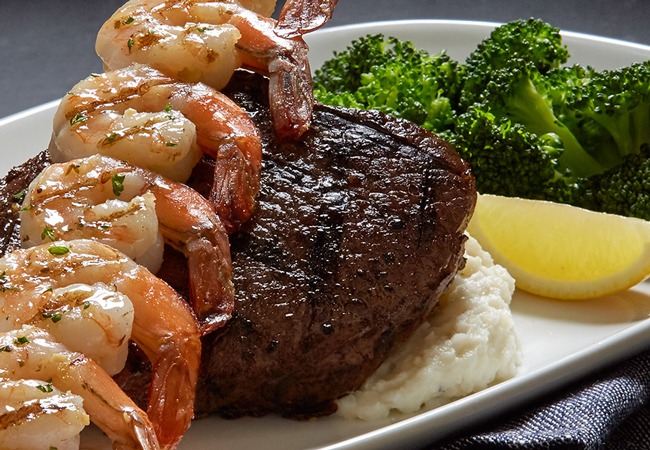 To qualify for Red Lobster's "Lighthouse" pickings, a dish just has to be 600 calories or fewer, which is exactly how a dish with more than 75 percent of your recommended daily intake of sodium sneaks onto a list that implies the dishes are healthy. 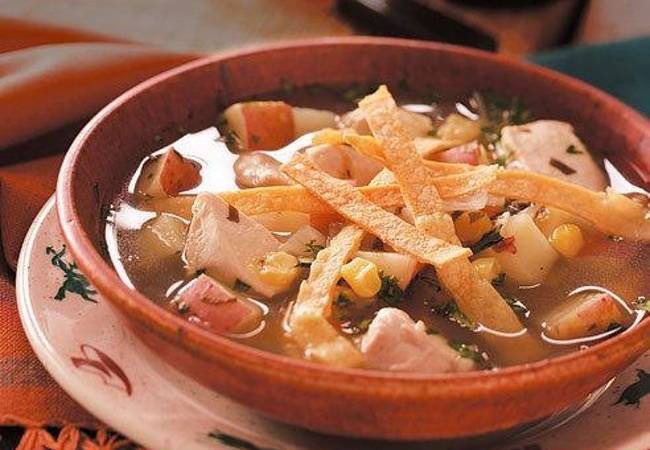 You might as well loosen your belt now. With nearly 2,000 milligrams of sodium, this soup is sure to balloon your belly if you don't pair it with enough water. Instead of ordering this bowl, check out these 20 Best-Ever Fat Burning Soups. 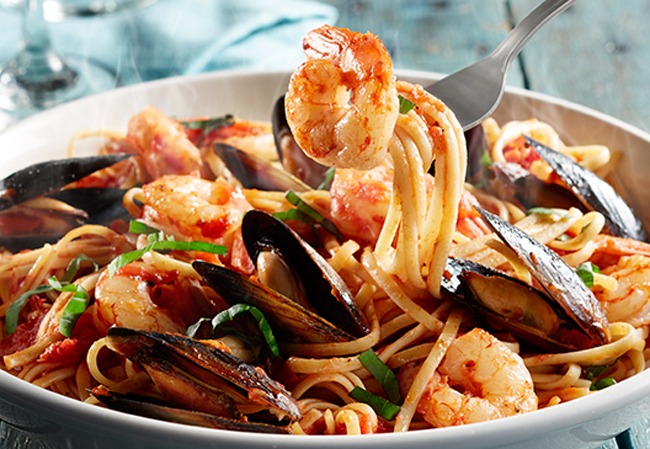 Olive Garden sure takes the old saying, "make sure your pasta water is as salty as the sea," to heart. 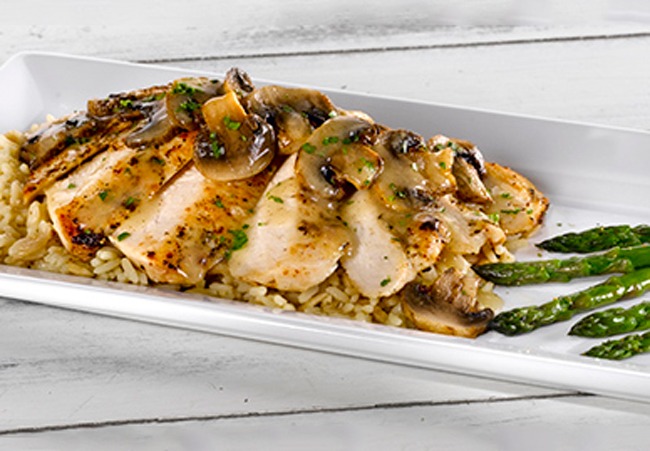 It may look innocent, but this "Fit Favorite" packs in as much sodium as 16 orders of McDonald's small-sized fries. 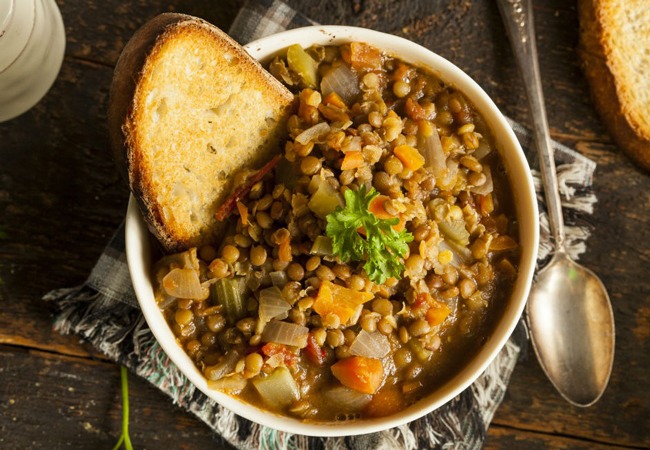 Carrabba's says they're "committed to providing a variety of healthful options that meet our customers' health and nutrition needs," but just "selecting the freshest produce and leanest proteins" and keeping dishes under 600 calories isn't enough to fulfill that promise. It also means keeping the sodium counts of your soups to less than what someone should be consuming in an entire day. 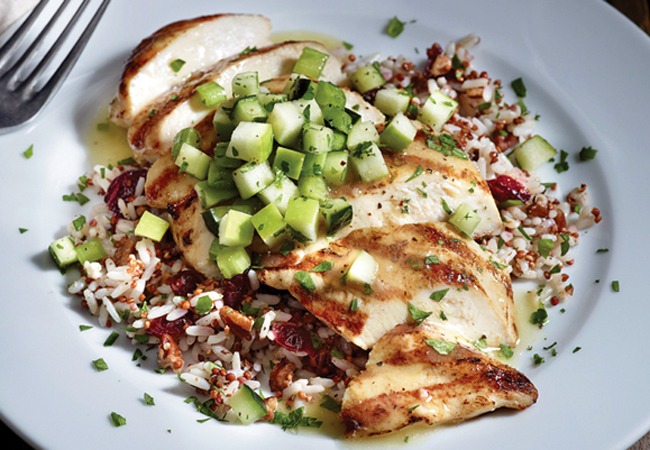 Applebee's created a fairly well-balanced dish—made with whole grains, lean protein, healthy fats from pecans, and even a serving of fresh fruit—we just wish there was a little less salt than is included.

Because They're… High in Sugar 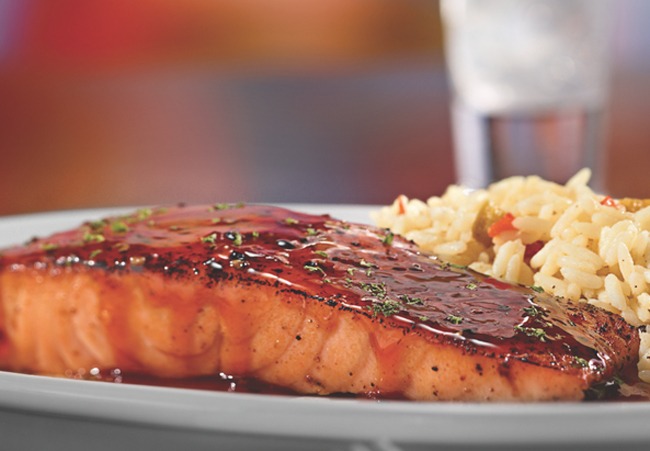 It's likely that the salmon you order from Ruby Tuesday is farmed, meaning it's just as high in inflammatory omega-6 fatty acids as it is in the anti-inflammatory omega-3s. The inflammation scale tips a little more toward inflamed when you factor in 17 grams of added sugars. Sugar isn't the only food that causes inflammation. Don't miss these 14 Foods That Create The Inflammation That's Making You Fat. 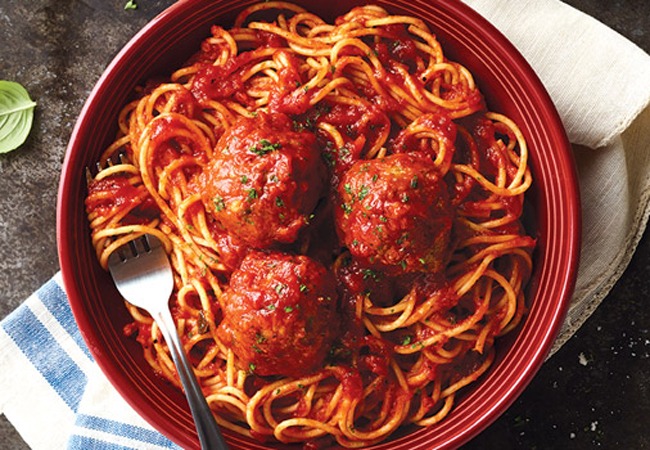 It's not just the sugar you have to watch out for. Those 120 grams of simple carbs from refined-flour spaghetti will be treated similarly to sugar in your body: they're broken down quickly, cause your blood sugar to spike, and you'll be craving food again soon after eating. 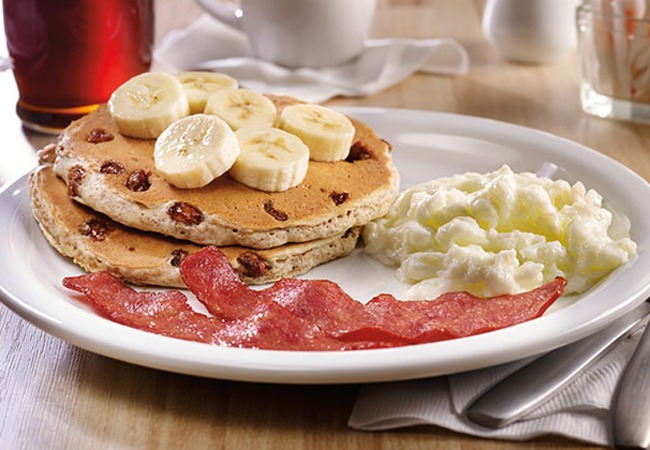 This single dish contains just one gram of sugar shy of what the USDA sets as a daily limit of added sugars on a 2,000 calorie diet. Simply switching pork bacon to turkey and subbing whole eggs for whites isn't enough to make this dish healthy. 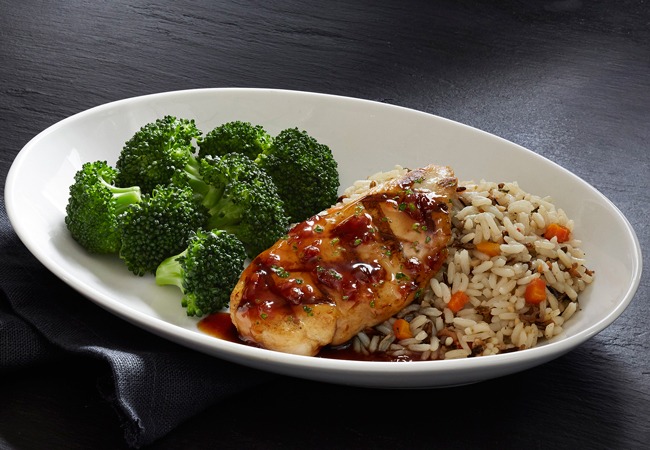 Low in calories, fat, and sodium while being high in protein. This Red Lobster dish would have earned an "Eat This!" stamp of approval had it not been for the 22 grams of sugar poured on top of the chicken.

Because They're… High in Fat 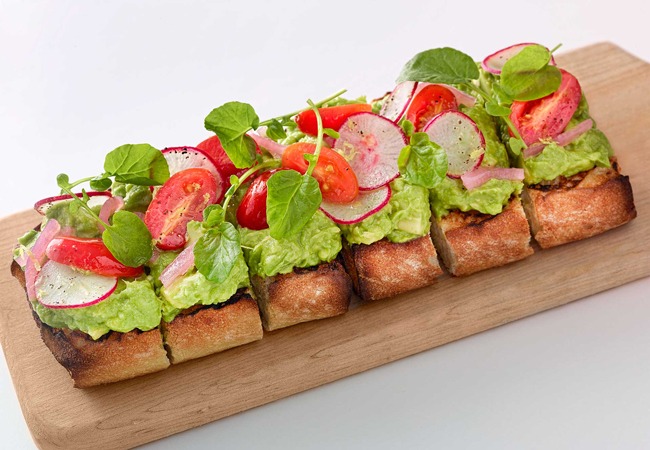 Did you know "superfoods" can actually supersize you if you eat too much of them? And this dish from the Cheesecake Factory—a restaurant notorious for its massive portions—can do just that. Because the term "superfood" is associated with nutrient-dense foods, the name of this dish may lead you to believe it's good for you. Not only does the term have little scientific basis, but this high-fat, high-calorie meal won't be doing your waistline any favors. In fact, dieticians consider one serving of avocado to be only a quarter of a whole fruit (which contains only 7 grams of fat—not 41 grams). Take in any more than that and you may wind up packing on belly fat.

Supersized avocado toast isn't the only belt-busting culprit. Don't miss these 17 Superfoods That Can Make You Fat. 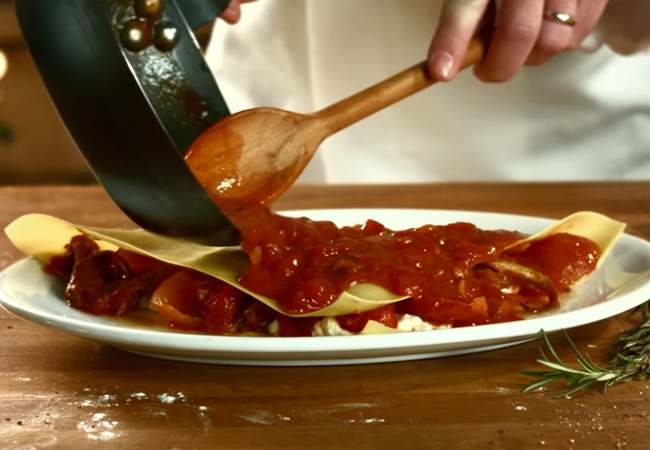 This giant raviolo is filled with roasted tomatoes, whipped ricotta, pesto, pomodoro, and parmesan. It sounds good, but unfortunately, all that cheese equates to a staggering 105 grams of fat, which is 135 percent of your daily recommended intake of fat in just one meal. 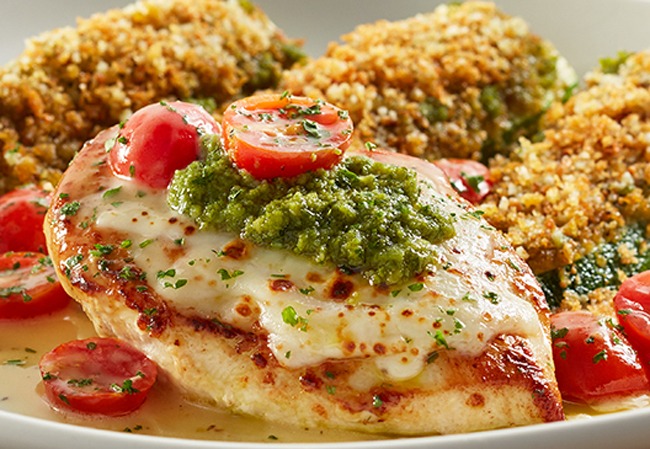 Yes, the layer of mozzarella on top of the chicken helps to boost the protein count of this dish, but it also piles on about half of your day's recommended intake of saturated fat and sodium.

Just because a food is "healthy" doesn't mean you can eat as much of it as you want. In fact, that's why we came up with this list of 30 Healthy Foods You Better Eat in Moderation. And even though this meal is "vegan" and full of gut-healthy fiber and energizing whole grains, 1,210 calories and 101 grams of fat is way too much for one sitting. 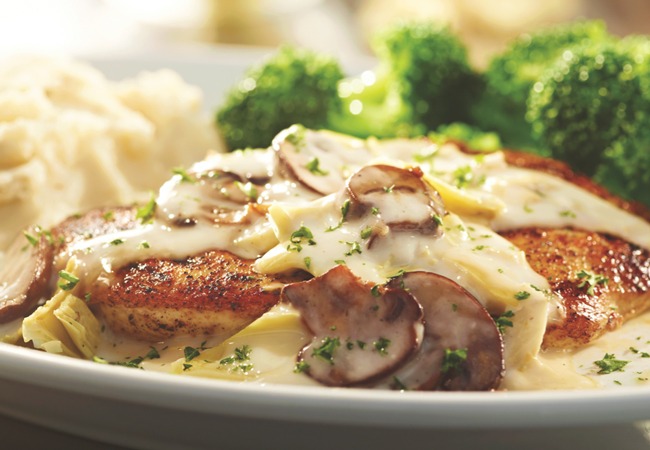 Not only does this dish exceed the amount of sodium you should be consuming in a day, but it also piles on 20 grams of fat from we're not even sure where, since mushrooms, artichokes, and lean chicken breast are low-fat foods. 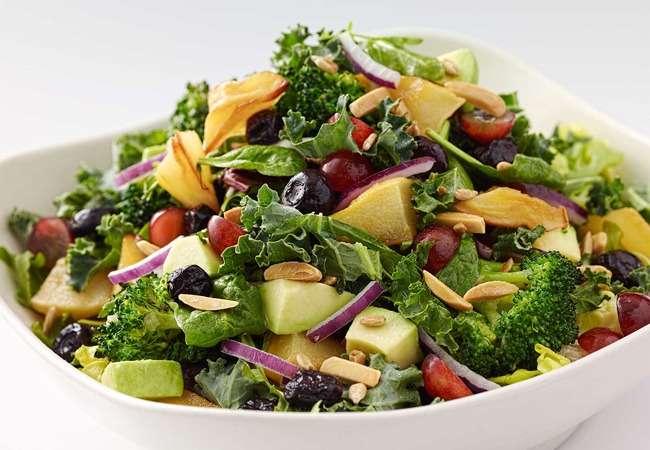 When you look at the ingredients—spinach, kale, avocado, broccoli, blueberries, and almond—this meal sounds like the poster child of a healthy meal. And we think it could be … if the portion wasn't as big as it is. But because Cheesecake Factory creates every dish as if it should be able to feed a small rural town, scarfing down this salad will set you back a day's worth of fat. And yes, this is one of the few times eating too much fat can make you fat. 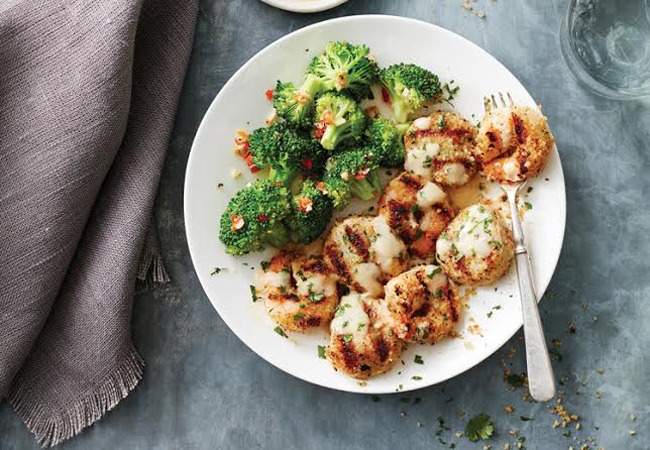 Sorry, but shrimp and scallops were actually ranked as some of the worst fish due to their low omega-3 fatty acid counts. So those 38 grams of fat aren't so much from the fish as they are from Carrabba's lemon butter sauce that's doused over the entire dish.