Some of these menu options are just over-the-top, for all the wrong reasons.

When you're in the mood for a warm tortilla stuffed with rice, beans, cheese, chicken or beef, guacamole, and a little pico de gallo, a burrito hits the spot. It's always best to make one yourself at home, as you can control exactly how much of each ingredient you're including. Sometimes, you just don't have the time for that! Or, you simply don't want to make it yourself—it takes some serious skill, after all. That's where the fast-food burritos come in.

Like anything else, there are some options that aren't necessarily the best, as they're highly caloric sodium bombs. You're much better off choosing another menu item! So we rounded up some of the biggest burrito offenders from popular fast-food and fast-casual spots, ranked from bad to the absolute worst. This way, you know what not to order! While you're making healthier eating choices, be sure to stock up on The 7 Healthiest Foods to Eat Right Now.

The best part about Taco Bell? Everything on the menu is customizable, so you can easily swap components of any menu item. It's actually fairly easy to eat something healthy at Taco Bell! One menu item if you leave as is that isn't necessarily the best option is the Beefy 5-Layer Burrito. Beef, cheese, sour cream, cheese, and nacho cheese are all wrapped up together, resulting in a burrito that has more than 1,200 milligrams of sodium. If you really want to indulge, just make sure this is a rare treat!

OK, so we know this is a breakfast burrito. It still counts as a fast-food burrito optionm though! At Sonic, the Ultimate Meat & Cheese Breakfast Burrito is high in fat and even contains 0.5 grams of heart-harming trans fat. Plus, it has more than 2,000 milligrams of sodium. The American Heart Association recommends most adults consume no more than 2,300 milligrams of sodium per day. This one burrito is getting you very close to that daily limit, and that's just at breakfast…

Chicken and avocado make for a solid combination. You're getting your protein fix from the chicken, and it's no secret how many benefits avocado serves up, including that it's a heart-healthy source of good fat. Somehow, the combo gets a little lost in this El Pollo Loco burrito, as it's loaded up with trans fat and sodium.

At Del Taco, the Epic Loaded Queso Burrito is, well, stuffed. Del Taco's famous crinkle-cut fries, creamy queso blanco, grated cheddar cheese, and pico de gallo are all wrapped in a warm, oversized flour tortilla, along with your choice of grilled chicken, carne asada steak, or Beyond meat. The fact that this burrito is packing as much sodium as you would get from 260 Classic Lay's Potato Chips is downright scary! You're better off choosing one of Del Taco's Chicken Rollers as a smaller, yet still satisfying way to get your burrito fix.

The Homewrecker burrito is a classic menu staple at Moe's. It's easy to see why, as it sure is a big burrito! It clocks in at 1,000 calories, which is half of the number of calories most people eat in an entire day. If you can skip the sour cream and cheese, and eat just half of the burrito at a time, you'll be much better off.

The Chicken Queso Burrito is a Qdoba staple, but the fact that it's coming in at more than 1,000 calories is reason to take a pause. The one gram of trans fat is troublesome, along with the sodium here. Remember, it's never a bad idea to split a burrito with a friend!

What's deceiving about this burrito from Baja Fresh is the size. It looks like it would be harmless, as it seems rather small compared to others on this list. If you order the Nacho Burrito with steak, you're looking at an entrée that is packing more than 3,000 milligrams of sodium. That's a whole lot of the salty stuff to be consuming from one dish. Especially since that's without factoring in any side dishes. You know there's a good chance you're going to want to munch on some chips, too. 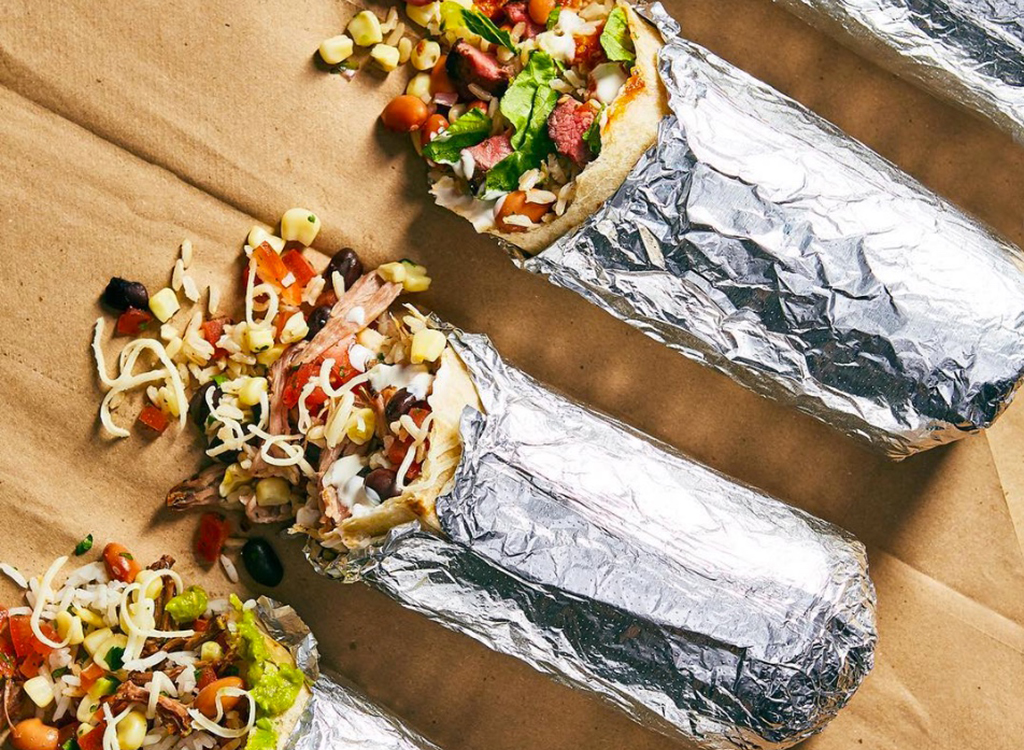 If you thought things couldn't get any bigger, allow Chipotle to enter the chat. The carnitas burrito has the highest amount of calories out of the other protein options. Plus, it contains a high amount of fat, saturated fat, and, you guessed it, sodium. If you really want to enjoy some carnitas meat, perhaps it's best to eliminate some of the other fillings. (Looking at you white rice, cheese, and sour cream!) The cilantro-lime cauliflower rice is a great substitution for the white rice. Or, you could just get a burrito bowl, which ditches the tortilla and saves you 320 calories and 50 grams of carbs.

Jennifer Maldonado
Jennifer Maldonado is a senior editor at Eat This, Not That!, specializing in food and health content. Read more about Jennifer
Filed Under
Foods To Avoid // Menus // Restaurant Chains