25 Worst Cereals to Stay Away From Right Now

When it comes to breakfast cereals, ignore the mascot's tempting gaze and focus on the nutrition.

Sugar. It's what makes a pile of musty grapes turn into a fine cabernet, or a bitter cacao bean into an exquisite chocolate truffle. It's also what turns a healthy breakfast into an energy-sapping, belly-bloating, bathroom-scale-tipping nutritional disaster, the enemy of rapid weight loss.

And chances are, your breakfast cereal has a lot more of it than you think.

Indeed, the supermarket is filled with brightly colored boxes of seemingly life-giving grains all touting their "natural" ingredients, packed with "essential vitamins and minerals," promising to be "part of a healthy breakfast." In reality, the cereal aisle is more like a dark alleyway in a horror movie, where all sorts of fiendish villains—vampires, cavemen, blood-thirsty honey bears-—lie in waiting. Some of their wares come stripped of their natural fiber and nutrients, with just a spray-coating of chemically created vitamins and minerals for "fortification."

When it comes to breakfast cereals, ignore the claims on the front of the box. Flip a cereal over on its side and get to the bottom line: When it comes to picking a cereal, you want as much fiber as possible, and as little sugar as possible. Period. In fact, in a UCLA study of 54 overweight teens, individuals who reduced added sugar intake by about 40 grams per day—the equivalent of 1 can of soda—showed a reduction in belly fat and an improvement in insulin function. Individuals who increased their fiber intake by the equivalent of ½ cup of beans showed exactly the same results. So whenever you max out fiber and reduce sugar, you're executing a perfect nutritional double play.

To help you more safely navigate the treacherous aisles, the staff at Eat This, Not That! took a hard look at the real nutritional value of America's most popular cereals. After examining the nutritional profiles of each, we ordered them by sugar content, nutrition per cup and ingredients. Anything containing harmful or just plain bizarre ingredients—hydrogenated oils, BHT, color and flavor additives and/or soy lecithin—lost points, despite any other redeeming nutritional qualities. And learn more ways to blast fat fast—thanks to Insanity trainer Shaun T, Maria Menounos, Padma Lakshmi and more in these 50 Best-Ever Weight Loss Secrets From Skinny People.

Despite its healthful rep, Raisin Bran contains 17 grams of sugar and 47 grams of carbs. Nonetheless, we've given it the best-of-the-worst ranking because of its low fat, satiating fiber and contents. Unlike most cereals you'll find on this list, Raisin Bran's first three ingredients are whole grain wheat, raisins (a healthy snack for weight loss) and wheat bran. But sugar is next in line. Although not nutrient-void like many of its competitors, 38% of the calories in this cereal come from sugar. 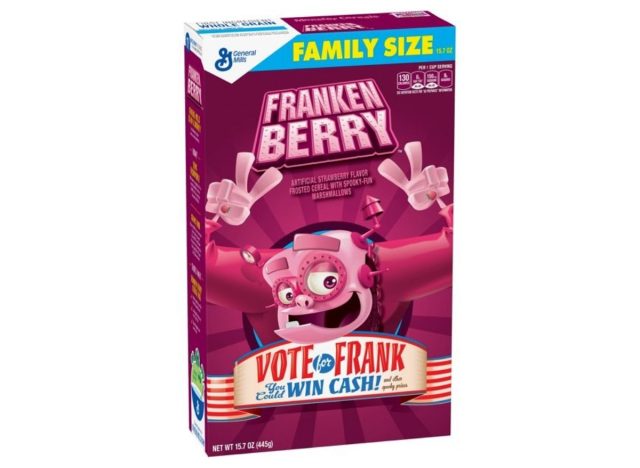 Twenty-eight percent of Franken Berry's calories derive from sugar, compared to the 60% contributed by the worst contender on this list. Unshockingly, this spooky cereal mainly consists of whole grain corn, sugar, and marshmallows, and artificial dyes and flavors create the cereal's pink color and strawberry flavor. Nonetheless, it contains 10 vitamins and minerals and no saturated fat or hydrogenated oils.

Kellogg's Corn Pops have zero grams of fat, 0 grams of wholesome fiber and about 15 grams of sugar. However, it also contains hydrogenated oils, which have been linked to high cholesterol, heart attack and strokes. Annatto is a natural colorant, often used in processed cheese products to impart a rich, golden hue. Sounds innocent, but a study published in Archives of Toxicology Supplement found that the dye caused allergic responses as frequently as artificial dyes did. Once you Pop—stop!

If you grew up in the '80s or '90s, you probably once loved the silly rabbit. But the trick's on you. General Mills made millions off one catchy line that marketed these sugary balls of cornmeal to children. And although they've certainly come a long way—they no longer contain high fructose corn syrup or artificial dyes and flavors—they still serve up a huge bowl of sugar for breakfast and not much else. See what happens to your body when you eat sugar.

It's no surprise that a cereal named after candy is packed with sugar and empty calories. And although this may be a (slight) improvement over the actual peanut butter cup, it still contains artificial flavors and colors. Recently researchers discovered Yellow No. 5 and Yellow No. 6 may promote Attention Deficit Disorder (ADD) in children. In fact, countries in Europe have either banned or require foods containing these additives to be labeled with the phrase "May have an adverse effect on activity and attention in children."

With just 28 percent of their calories coming from sugar, these tiny squares contribute more than just an insulin kick. In fact, they're made from whole grain wheat and rice flour and dish up 13 vitamins and minerals. However, one cup also contains 170 calories, 4 grams of fat and the preservative BHT, so limit yourself to one serving. According to Lisa Moskovitz, RD, CDN of the New York Nutrition Group, BHT "is still highly controversial and limited research exists on whether it is harmful to the body or carcinogenic," but she added, "it is still recommended to avoid consuming large quantities."

The only positive note about this cereal (named after a candy bar and an ice cream!) is that it's made with 100% whole grains. Thirty-three percent of its calories come from sugar, and the remaining two-thirds are carbohydrates. There's just one gram of both fiber and protein, two crucial ingredients that encourage satiety. Opting for Hershey's for breakfast will have your hunger hormones running wild.

These chocolate- and marshmallow-filled nuggets dish up 3 grams of filling fiber. Beyond that, the s'mores-inspired cereal is sugary, processed and void of nutrients. One cup contains one gram of saturated fat, 10 grams of sugar, BHT and soy lecithin, an emulsifier that derives from genetically modified soybean products to combine water and oil. We haven't been that grossed out since reading our story about how soda is linked to cancer.

You'd be better off drinking a glass of chocolate milk than pouring a bowl of Count Chocula. Thirty-six percent of this cereal's calorie content derives from sugar, and the other 42% comes from corn meal and marshmallows.

Golden Grahams are void of hydrogenated oils, artificial dyes and flavors, soy lecithin and BHT. But one cup contains 320 milligrams of sodium—21 percent of your daily salt allowance—and 9 grams of sugar. Instead, power up with these best breakfast foods for weight loss.

Cheerios' flavored line includes Chocolate, Frosted, Fruity, Banana Nut, Peanut Butter and Apple Cinnamon. Each box is full of a sugary low-cal cereal that contains almost 3 grams of fiber and protein, and 200 milligrams of sodium. Go for the old-school plain variety instead—particularly if you have kids.

Fruity Pebbles' mid-level ranking is based heavily on its ingredients: Third on the list is hydrogenated vegetable oil, and it also contains harmful artificial color dyes and the preservative BHA. As if starting your day with a fiberless, sugary meal weren't bad enough, it's basically a bowl of processed empty calories. And it gets worse from here. Instead, start your morning with some of these best foods for a toned body.

Although fat-free, traditional Frosted Flakes are the opposite of grrrrrreat. What they lack in fat, they make up for in sugar (13 grams per cup, to be exact).

Although they might be magically delicious, Lucky Charms are far from magically nutritious. Their first ingredient is whole grains, but the second is marshmallows or sugar, followed by modified corn starch, corn syrup, dextrose, gelatin, artificial food dyes and artificial flavor. Thanks to these colorful shapes, you can fulfill the American Heart Association's added-sugar limit for the entire day by eating 1 cup! Bad luck.

And the chocolate version contains more carbs and less protein.

If it weren't for the one gram of saturated fat, 49 grams of carbs and the BHT content, Kellogg's Low Fat Granola with Raisins may have ranked better on this list. One cup has 6 grams of filling fiber and 7.5 grams of satiating protein. It's also made with whole oats, whole-grain wheat, raisins and almonds.

Because this was initially advertised as a versatile cereal that could be eaten anytime from breakfast to dessert — and even in the place of candy — it's not surprising that 56% of Golden Crisp's calories come from sugar. (Even the cereal's mascot is named the Sugar Bear!) However, we moved it up a few ranks because of its simple six-ingredient list and zero grams of fat.

The second ingredient in Cocoa Puffs is sugar, making up 40% of the calorie content. It's no wonder that Sonny, the cereal's mascot, is cuckoo — he's on a constant sugar high. Sugar's most powerful effects aren't on our bodies, they're on our brains. When researchers studied the effects of the sweet stuff on the brains of rats, they noticed that after regularly consuming a high-sugar diet, their levels of oxytocin (the hormone responsible for satiety) began to decline. In other words, the more processed sugars we take in, the more chronically unsatisfied we feel, and the more we need to eat.

If you visit Cocoa Krispies' website, you'll find six images of whole-food toppings that Kellogg's encourages its customers to add to their kids cereal. Four of which are sugar. As if the fact that the actual cereal contains 16 grams of added sugars per cup weren't bad enough. Plus, these Krispies contain partially hydrogenated vegetable oil and BHT. With breakfast cereals like this one, it's no wonder one in three children in the US is overweight and/or obese. Instead, top your cereal with bananas—and don't miss our viral story: amazing things bananas do to your body!

In 2014, Cornell University credited cereal mascots like Cap'n Crunch, who make eye contact with purchasers, with 28% more brand loyalty. But this cereal is berry, berry bad.

If you used organic bread, cage-free eggs and cinnamon, french toast would be a wholesome meal—unless you drizzled it in processed syrup. Similarly, French Toast Crunch contains both processed corn syrup and refined syrup, plus color and flavor additives.

Toucan Sam made his first debut in the 1960s, telling his audience to follow their nose to the cereal's natural fruit flavors. Ironically, despite the plethora of color, all Fruit Loops have the same flavor, and "natural flavor" is the only supposedly natural ingredient. Loopy.

One glance at Apple Jacks' ingredient list should tell you to put it right back where you found it. The very first ingredient is sugar, and the tiny red-and-green "jacks" contain hydrogenated oil, BHT and color and flavor additives.

And the #1 Worst Cereal Is…HONEY SMACKS

Easily the worst way to start your day, Honey Smacks is 60% flat-out sugar. Although it has the lowest amount of sodium on this list, it contains the worst kind of fat you can consume: Hydrogenated oils, plus appetite-increasing soy lecithin and BHT. With less than 2 grams of fiber, these sweet wheat puffs are the equivalent of kissing a frog. Avoid.

RELATED: The Healthiest Breakfast Cereals on the Planet

Eat This, Not That!
Inspired by The New York Times best-selling book series, Eat This, Not That! is a brand that's comprised of an award-winning team of journalists and board-certified experts, doctors, nutritionists, chefs, personal trainers, and dietitians who work together to bring you accurate, timely, informative, and actionable content on food, nutrition, dieting, weight loss, health, wellness, and more. Read more about Eat This
Filed Under
Breakfast // Cereal // Foods To Avoid // Groceries // Grocery Shopping // Shopping Tips // Sugar