What Happens To Your Body When You Eat Canned Chicken

Is it unhealthier than other chicken? We asked the experts.

When you're pressed for time and need a quick and easy meal, canned goods seem like a smart alternative. And sometimes, they are. But other times, they come with some risk factors. Such is the case with canned chicken. Though you may believe you're receiving the same meat from the butcher in a different form, that's not always the case.

Fresh chicken typically comes out of a farm to a grocery store and straight into your oven. On the other hand, canned chicken is processed and sterilized under high heat to avoid bacteria growth. And as celebrity chef and nutritionist Serena Poon explains, meat processing deters from its texture, flavor, and, most importantly, nutritional value. More often than not, Poon notes, canned chicken brands source their chicken from a factory farm, which can affect the quality and healthfulness of your meal.

Here are some things that happened to your body when you pop open a can of chicken, and for even more healthy eating tips, be sure to read up on our list of The 7 Healthiest Foods to Eat Right Now.

You could experience inflammation.

When we think of processed foods, bags of chips and mass-produced cookies usually come to mind. However, it's important to remember that canned chicken is also processed food. Will you receive some nutritional benefits? Sure. But, Poon notes processed meats remove much of the vitamins and minerals and cause inflammation in the body. And sadly, inflammation is a leading cause of almost all diseases.

According to one researcher, "sterilized canned meats suffer a considerable change in the process due to protein denaturation and aggregation by heat. The texture of canned meat after sterilization can be mushy, and a marked deterioration in aesthetic appeal and eating quality often occurs."

Here are the Side Effects of Eating Canned Foods Every Day, According to Science.

You could be exposing yourself to BPA.

Bisphenol-A, or BPA, is a scary chemical that's encouraged many companies to label their products as BPA-free to gain consumer trust. However, there may be trace amounts of BPA in canned foods since it prevents the inner lining of canned food items from corroding and breaking, according to Kimberly Bowman, MS, CNP, the nutritionist for the F45 Challenge.

"High levels of BPA within the body can occur from overconsumption of canned meats or other food items and has been linked to a greater risk of heart disease and diabetes," she warns.

Also, she notes BPA has also been suggested to bind to the receptors of the hormone estrogen, in addition to thyroid hormones.

"Researchers are suggesting that the interaction of BPA with various hormones in the body may negatively affect our health including cell repair, fetal development, energy levels, and fertility," says Bowman.

Get even more healthy eating tips straight to your inbox by signing up for our newsletter!

You could feel satisfied for longer. 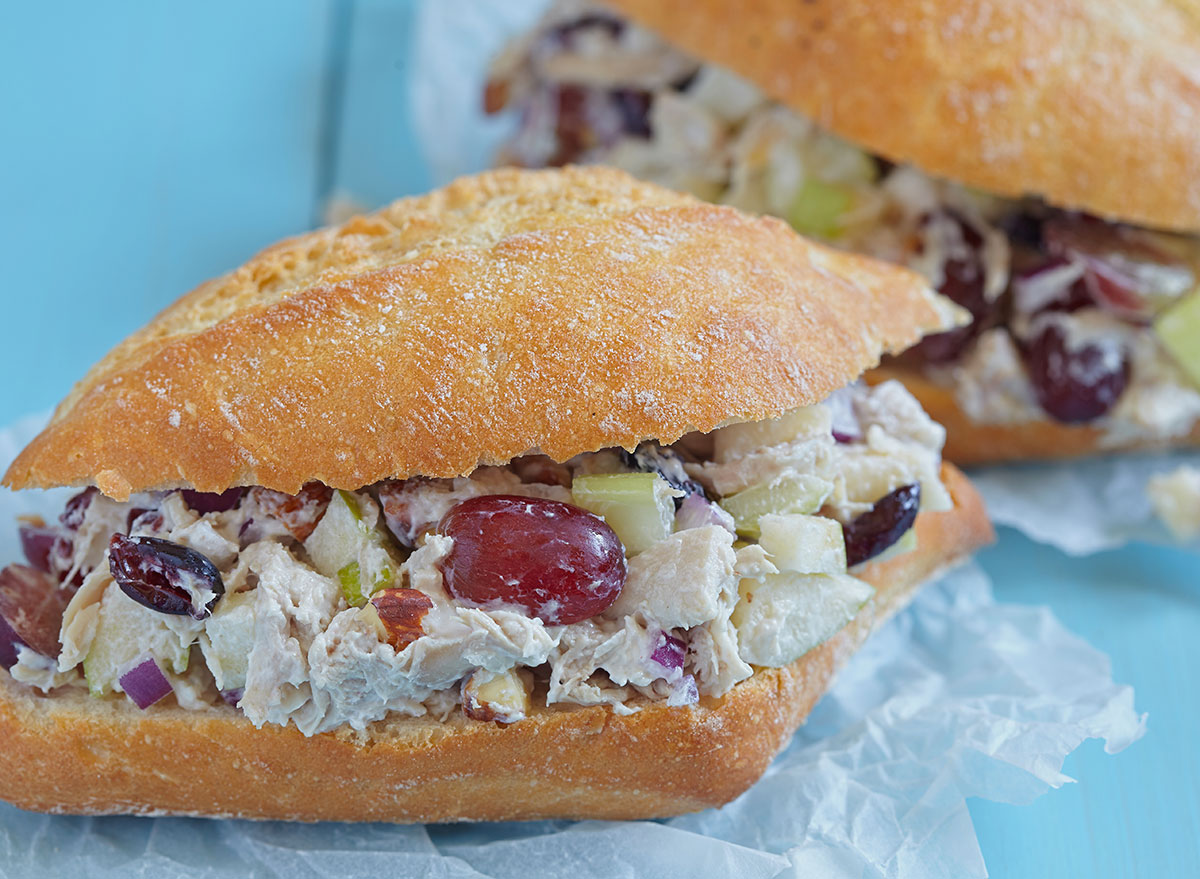 On the positive side, canned chicken is full of protein, so if you're in a bind, it could be a once-in-a-while savior. As weight loss coach Stephanie Mansour explains, this protein could help you feel satisfied for longer and prevent you from overeating. It also could cut back your carb cravings.

"Chicken helps your body release hormones that cause satisfaction in hunger. Because eating the right amount of protein helps your body stay satisfied, canned chicken may even help you to lose weight," she says.

Related: These Are the Best Forms of Lean Protein You Can Eat

You are consuming sodium phosphate.

Poon explains canned chicken contains sodium phosphate since it's added as a preservative. Though phosphates do occur naturally in some foods, researchers have found added inorganic sodium phosphate to be particularly troublesome.

"Sodium phosphate is incredibly dangerous for people already experiencing kidney problems. It has also shown to be detrimental to cardiovascular health," she says.

And in general, she recommends avoiding sodium phosphate additives altogether.

You could gain muscle.

Because protein is needed for muscle growth, Mansour says the canned chicken you eat may be used by your body to activate this growth.

"Chicken contains leucine, an amino acid that triggers protein building pathways," she continues. "If you're looking to stimulate muscle growth, but you don't have the time to prepare and cook fresh chicken, canned chicken may be the way to go."

You are eating chicken from an inhumane source.

As with all meat, not all are created or raised equally. Typically, with canned chicken, Poon says it's likely you aren't eating the most humane of highest-quality poultry.6254a4d1642c605c54bf1cab17d50f1e

"Much industrial chicken is raised in terrible conditions, and many have infections and are treated with antibiotics," she says. "Physically and energetically, this is all transferred to you when you eat chicken from an industrial source. Antibiotic use in meat production is specifically connected to human health concerns such as antibiotic resistance and child development issues."

What about canned fish? Here's What Happens To Your Body When You Eat Canned Salmon.