20 Ways to Stretch Your Paycheck at the Supermarket

You may not be able to haggle with the grocery cashier, but there are some easy ways to save at the supermarket.

One of the top excuses people give when they say they want to eat better but can't? "It's too expensive to eat healthy."

First of all, it's time to stop making excuses. And second of all, eating healthy doesn't have to be expensive! To help you save a few bucks on groceries, we've rounded up these simple tricks that will help you keep hard-earned money in your wallet and put better food in your cart. And once you've bought your groceries, get inspired to cook with them with these 50 Cheap and Easy Slow Cooker Recipes.

A simple way to save money on your grocery trips comes from a 2010 Journal of Consumer Research study. Researchers found that shoppers who paid with cash saved an average of 59 to 78 percent more on their grocery bills than those who checked out with plastic. The explanation: Credit and debit cards are more abstract forms of payment, so you don't use them as carefully as you do cash.

If you're a regular at Whole Foods, this tip is for you: According to a Whole Foods culinary content coordinator, shopping on Wednesday will help you keep your wallet fat. That's because it's on this day that the grocer's sales from the previous week overlap with sales for the current week. That means you'll have two times the discounts if you shop on hump day! Speaking of Whole Foods, have you seen these 25 Best Whole Foods Finds Under $5?

Ever wonder why berries are cheaper during the summer, but outrageously expensive in the colder months? The same goes for many "fresh" veggies like asparagus and zucchini. When they're sold out of season, this produce skyrockets in price as it has to be imported from other countries or warmer states. Save money by looking for fresh food that is in season. It will taste better, too!

Whether you're living alone or feeding a family of five, bulk bins and bulk stores are great ways to save money. If you're single, and usually don't finish food before it goes bad, try grabbing your nuts, oats, and seeds from bulk bins. (Here's a tip: because of the high natural fat content of these whole foods, they tend to go bad quickly! Either buy in small batches, or follow our freezer tips to save for later.) Feeding a larger family? Check out stores like Costco or Sam's Club to purchase groceries in bulk that you know you'll use up. Focus on items you use a lot of and that won't spoil, like paper products and frozen foods. 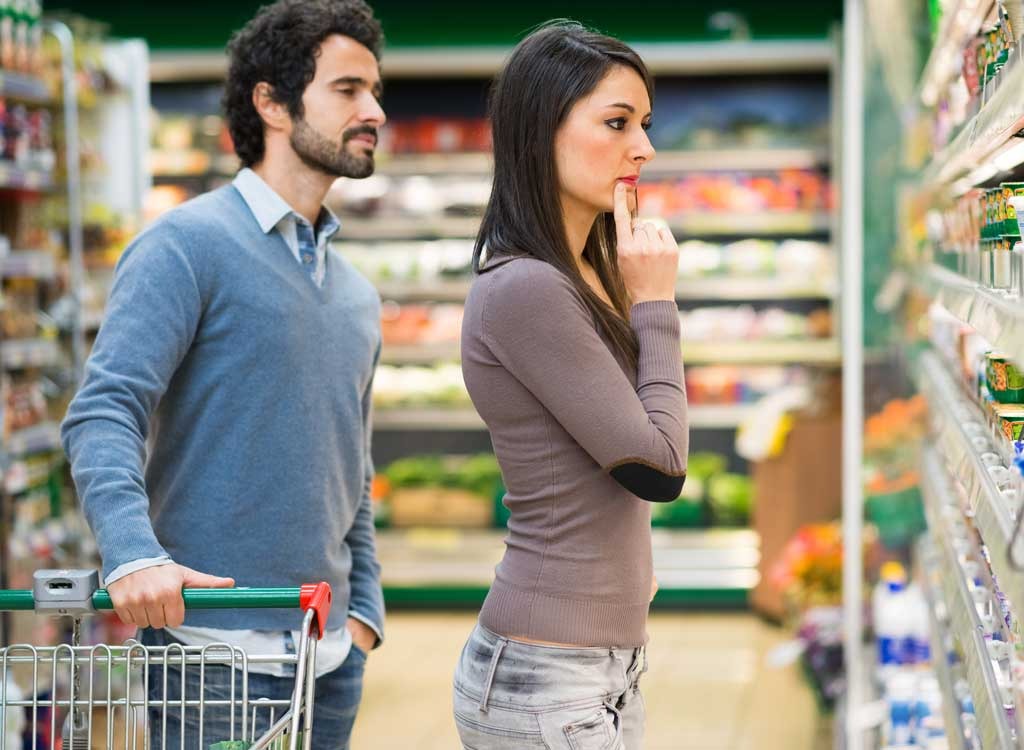 You might not know it, but supermarkets are a pay-to-play kind of place. Marketers pay to put their products at eye level, since consumers are more likely to purchase these items. For this reason, these product are also generally the most overpriced. You're more likely to find less expensive alternatives from smaller, local manufacturers if you look on the shelves below or above.

No need to turn your nose up at generic brands just because they're cheaper. Because marketing and advertising is built into the cost of a food, branded items are always more expensive than their generic counterparts. (For example, Whole Foods' in-house brand 365 sells its 16-ounce container of Creamy Unsweetened Peanut Butter for $4.99, while the same jar of Maranatha Organic Creamy Peanut Butter goes for $8.99!) Not only are they cheaper, but in many cases, these items are made by the same manufacturers and use the same ingredients as your major-label brands. Just be sure to scan nutrition and ingredient labels to ensure you're getting a quality product.

Snack Before You Shop 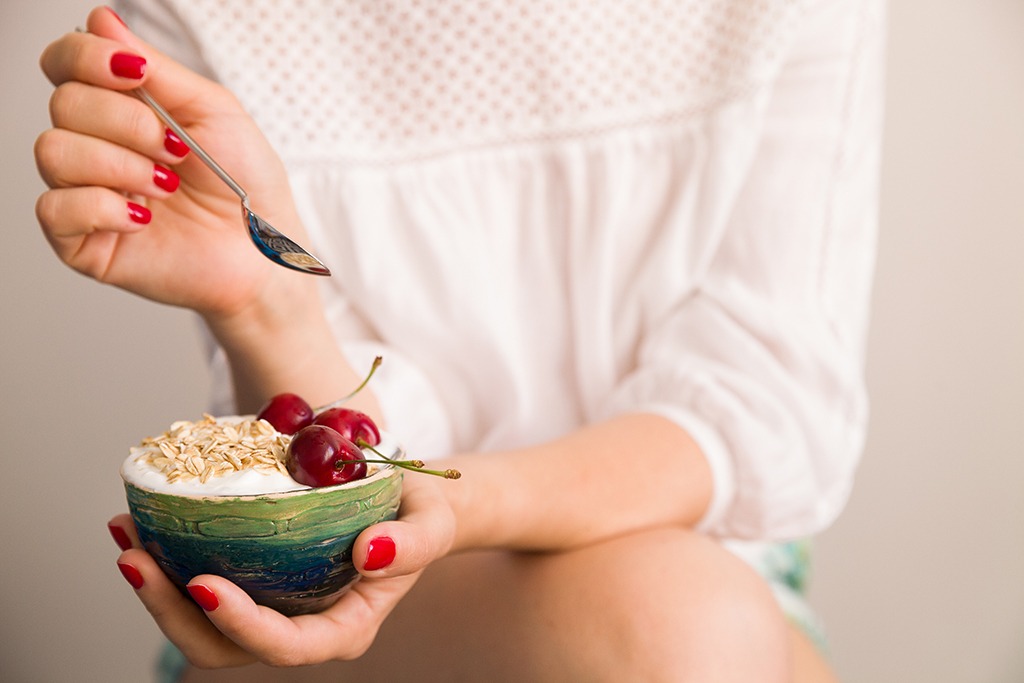 It may sound silly to eat food before you shop since you're going to the store in order to get food, but this is a critical step. An empty belly leads to increased food cravings, and when you combine that with shopping, your wallet is in for a rude awakening. A 2008 study published in the Journal of Consumer Research found that consumers, even when on a tight budget, are more likely to spend more if their appetites are stimulated before making a purchase.

Yes, one container of yogurt costs $5 and the other $6. But before buy the cheaper one to save money, take a closer look at the net weight. You'll often find that the more expensive container contains more food—and therefore is really cheaper. Check out the sticker that lists the price; there's usually a price per pound or price per ounce number you can use to help make your decision.

Put a Smile On! 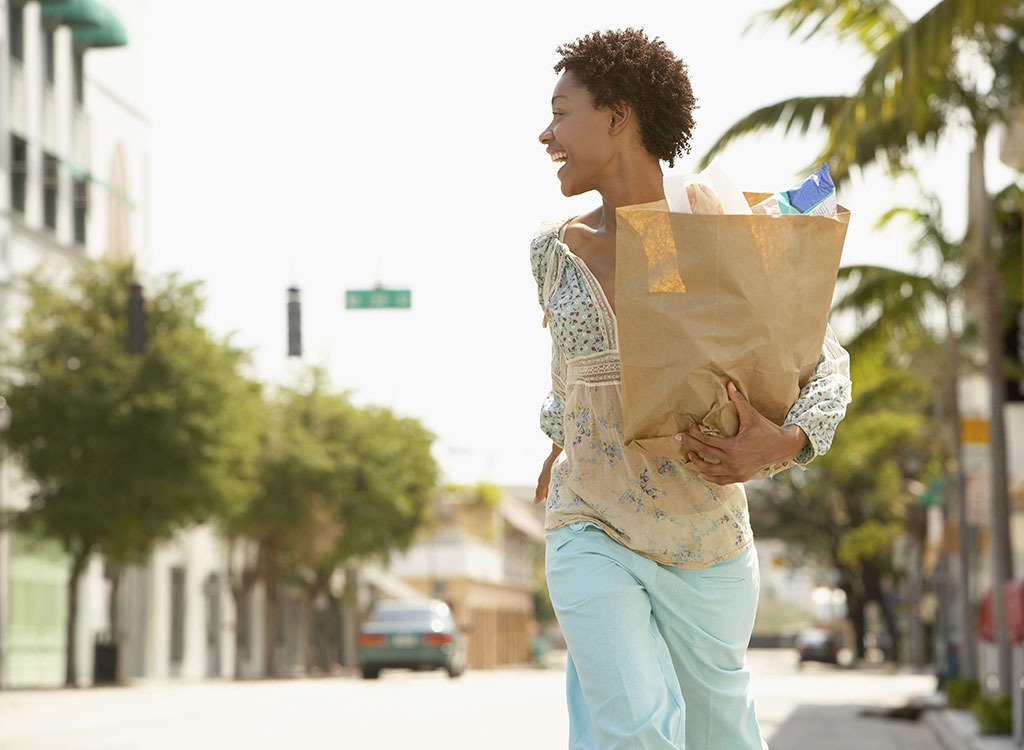 It may sound silly, but it's true! A Psychological Science study found that when shoppers were feeling sad, their negative emotional state actually increased the amount of money they were willing to spend on items four times more than shoppers who were in a neutral or pleasant mood. Yet another reason to not shop hangry!

You know what will never be $19.99 per pound? Beans. Legumes and whole grains provide lots of filling protein and fiber that can bulk up meals for a fraction of the cost of fresh fish or organic chicken. In fact, studies have shown that plant protein can actually be more filling than the same amount of animal protein! Use beans in your soups, enchiladas, casseroles, and salads and save money.

Fresh veggies are delicious, but if produce isn't in season or you're tight on cash, don't be afraid to buy frozen. Not only will frozen be cheaper, but it may also be healthier: One study found that green beans and spinach lose as much as 75 percent of their vitamin C after being stored in the fridge for a week. Because frozen foods are picked and frozen at their peak nutritional potency, they retain the same nutrition—if not more—than the produce that's been transported and sitting on grocery shelves for weeks.

Know Which Foods You Can Buy Conventional 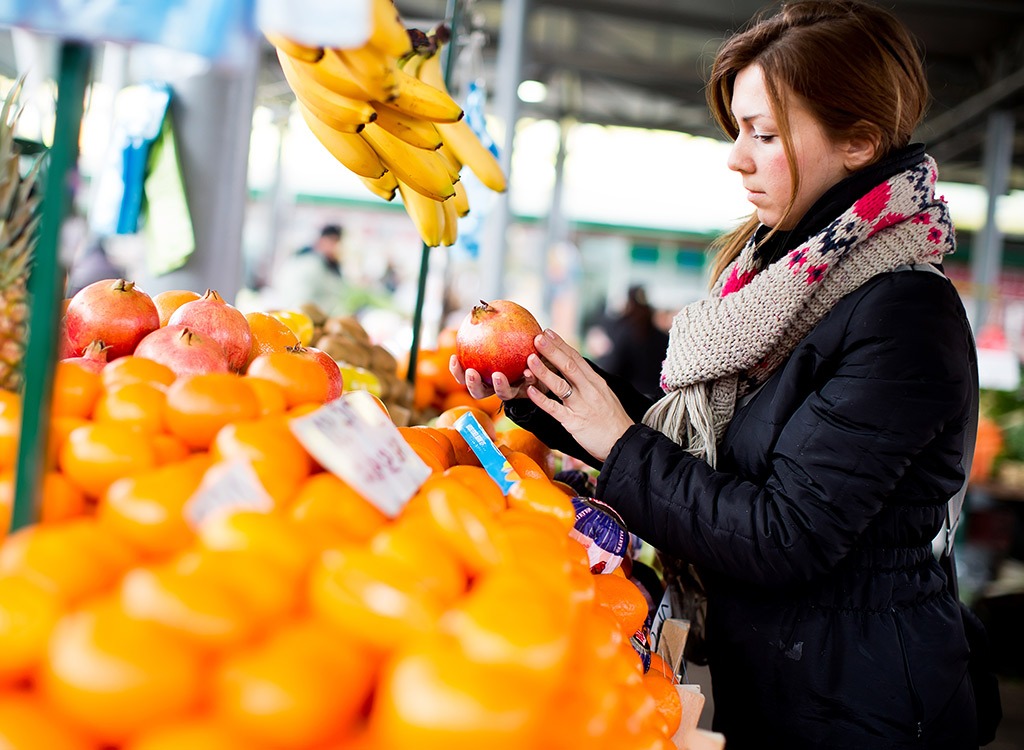 Every year, the nonprofit Environmental Working Group (EWG) ranks produce based on pesticide contamination. They sort everything into the "Dirty Dozen" and the "Clean 15." You only have to splurge on organic if you're buying foods listed on the dirty list, like strawberries and apples. Avocados—and anything you have to peel before you eat it (such as a banana or orange)—are safe to buy conventional for cheaper.

Get to Know Big Bird

Instead of buying individual boneless, skinless chicken breasts, consider purchasing a whole chicken. Roast the bird using one of these slow cooker recipes, and you'll have lean meat for numerous meals. Fear the whole bird? Sometimes the meat counter will portion the chicken at no charge. Once you've eaten the meat, you can also use the bones to make soup!

Don't head to the store without checking what you have stocked in your pantry first. If you know what's in your pantry, you won't have to splurge on a ton of things you don't need at the time, which will save you money right off the bat.

Learn How to Save Herbs 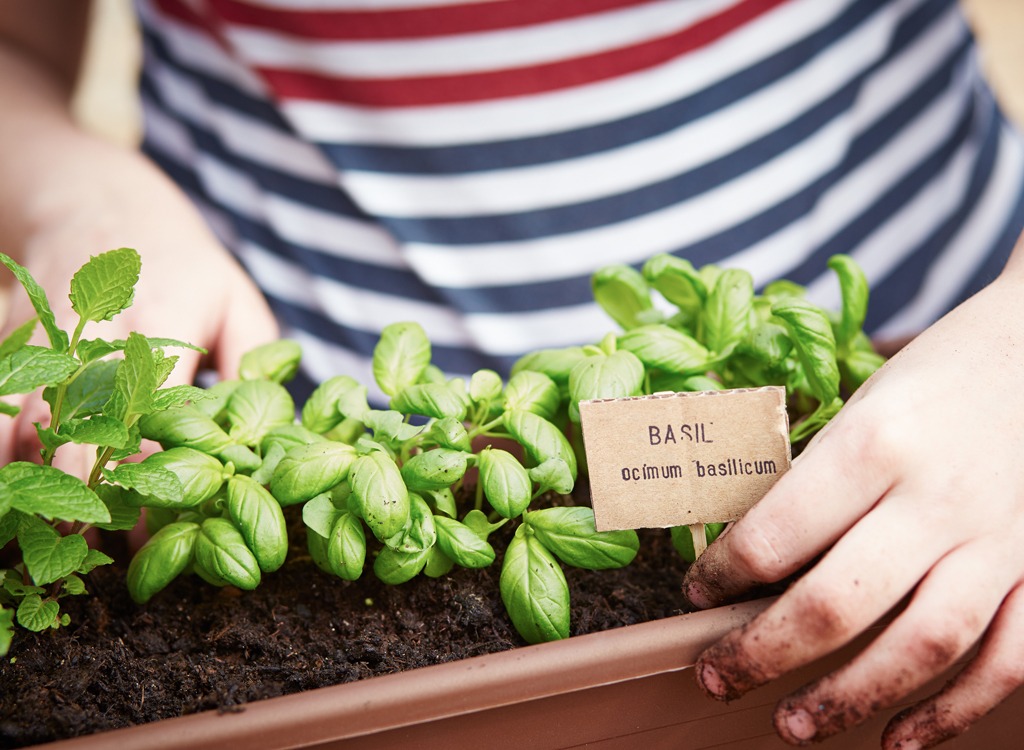 It can get pricey having to buy fresh herbs every week. They brighten up any dish, but they also drain your savings. Instead of purchasing a new bunch every week, try growing your own herb garden. Otherwise, you can steal this tip to keep your herbs fresh for weeks! (That way, you don't have to throw them out after they wilt and brown in just a couple days.)

When you get fresh herbs (like cilantro or basil), cut the stems again (like you would with flowers), and add to a tall glass with an inch of water. Cover with a zip top bag and secure the opening with a rubber band to make a makeshift greenhouse. Keep in the fridge and you won't have to throw your herbs, or money, in the garbage! For stiff herbs like rosemary or thyme, you can make into a compound butter or store in an icecube tray in olive oil.

Creating a grocery list before you head to the store will help you stay focused on what you need to buy—not what you want to buy. A list gives you purpose and leaves you less susceptible to marketing tactics, sweet temptations, and impulse purchases. Science even proves it! A study supported by the Marketing Science Institute found that shoppers who made "quick trips" to the store purchased an average of 54 percent more merchandise than they had planned to. Put pen to paper and make a list to save money.

The word "lazy" is practically synonymous with hemorrhaging money. Why the connection? If you don't want to put in time to do something, you're going to have to pay for the cost of having someone else do it. That certainly goes for pre-made meals, but it also applies to things like canned beans and shredded cheese. According to stats we gathered from Instacart, a 6-ounce bag of shredded cheddar costs $5.99 while an 8-ounce block of the same cheese variety costs a dollar less. And get this: Two pounds of carrots cost $1.29 while the same amount of pre-cut carrot sticks sells for $7.16, according to a Consumer Reports study. Like grating your own cheese, slicing and dicing your own vegetables and fruits will save you some major cash.

To your supermarket of choice, that is. According to Ken Immer, President & Chief Culinary Officer of Culinary Health Solutions, it's worth taking an extra minute or two to join your store's sales club because all you'll have to do after that is swipe your card (or enter your phone number) for savings only available to members. And let's be real, it's kinda fun to see your loyalty points add up, too! Some programs even track your monthly savings. 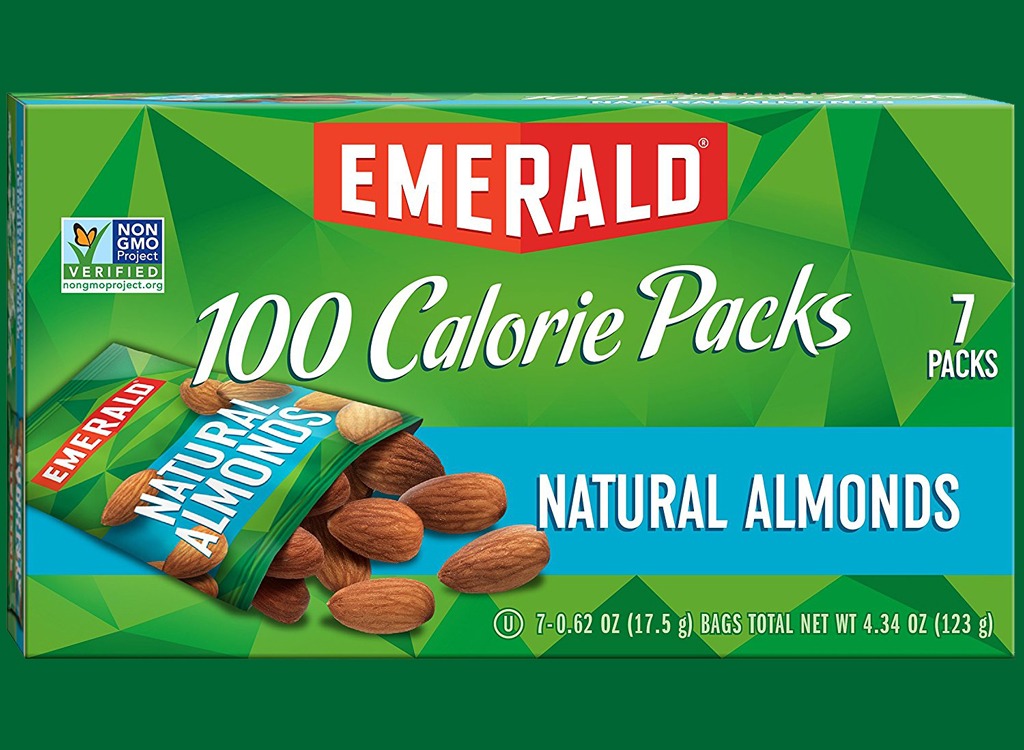 We're nuts about nuts, but one thing nut—sorry, not—to do it buy them in little 100-calorie, pre-portioned packs. While a box of Emerald 100 Calorie Packs Walnuts & Almonds breaks down to $2.25 per ounce, an Emerald Natural Almonds & Walnuts canister is just $0.55 per ounce. That's a 68 percent markup! Hold onto your cash and just bring the whole jug to work with a measuring cup, or divvy it up into snack bags.

Yes, we know there are weeks when it all gets overwhelming, but that's why we have weekends! Utilize your weekends to meal prep (if you need guidance, look no further than our 25 Tips for Meal Prep Sunday), and shop accordingly. Without proper planning and budgeting time to cook, you're more likely to run to the store in a crunch and buy overpriced, pre-washed, chopped, and pre-cut foods that cost much more than making them yourself.