If you want to strip away belly fat quickly, cheaply, and easily, use these tea hacks pronto.

I first discovered the weight-loss powers of tea when my mother, suffering from a terrible battle with diabetes, asked me to help design a tea cleanse for her. As a former nurse in Korea, she already knew the power of this lifesaving drink. Sure enough, with the plan she and I designed together, she dropped an amazing 9 pounds in just a week, and brought her blood sugar under control.

Since then, I've turned that program into a bestselling book, The 7-Day Flat Belly Tea Cleanse. And while it describes an easy and effective protocol for stripping away belly fat fast, you don't necessarily have to follow it exactly. Here are some of the most effective hacks to use when you're ready to lose weight—at the sound of a whistle. 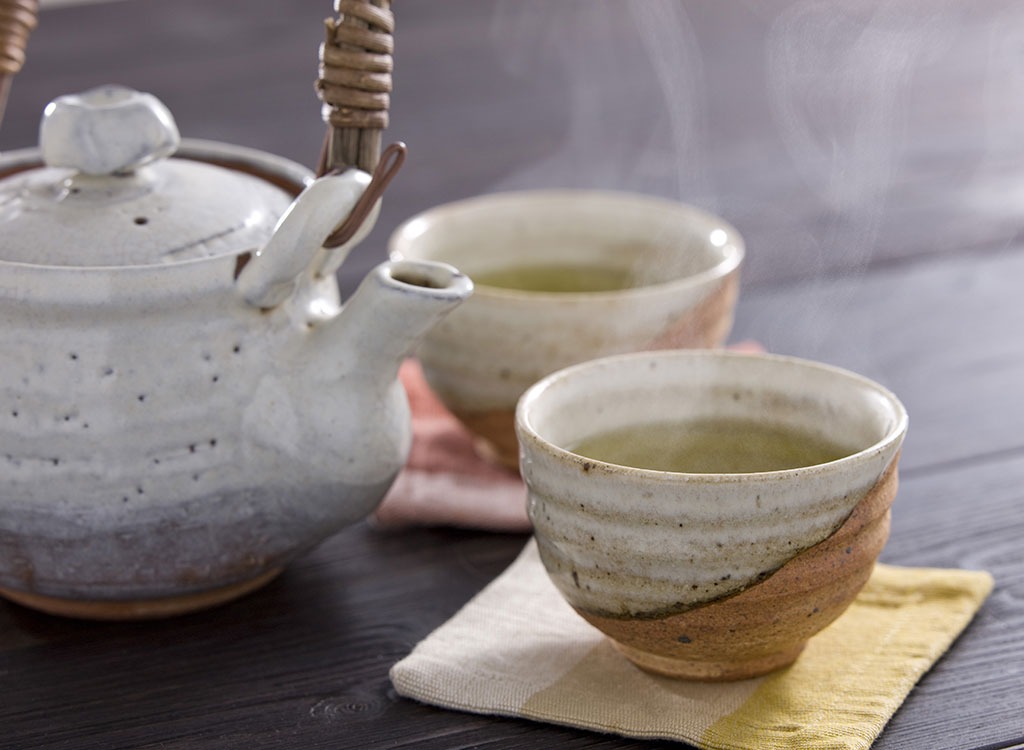 Every tea has its own special weight-loss powers, but if your boat is sinking and you can only grab one package of tea before swimming to the deserted island, make it green tea. Green tea is the bandit that picks the lock on your fat cells and drains them away, even when we're not making the smartest dietary choices. Chinese researchers found that green tea significantly lowers triglyceride concentrations (potentially dangerous fat found in the blood) and belly fat in subjects who eat fatty diets. Follow these steps to make the perfect cup of green tea!

MAKE IT YOUR POST-WORKOUT DRINK 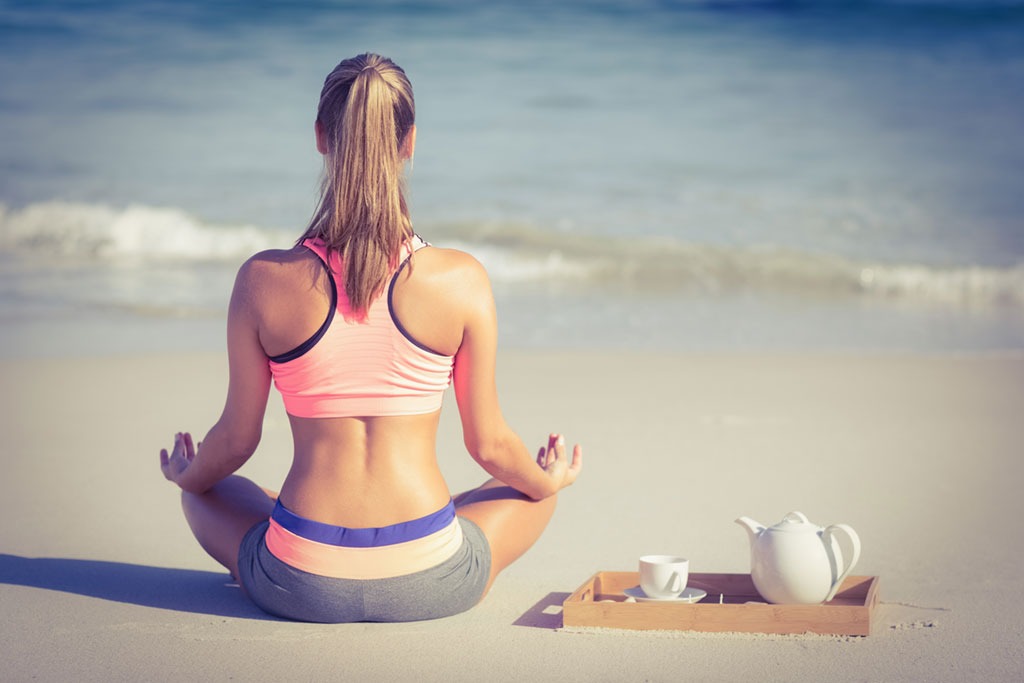 Brazilian scientists found that participants who consumed three cups of the beverage every day for a week had fewer markers of the cell damage caused by resistance to exercise. That means that green tea can also help you recover faster after an intense workout. In an American Physiological Society study, participants who combined a daily habit of four to five cups of green tea each day boosted their endurance exercise performance by up to 24 percent.

The concentration of EGCG—the superpotent nutrient found in green tea—may be as much as 137 times greater in powdered matcha tea. EGCG can simultaneously boost lipolysis (the breakdown of fat) and block adipogenesis (the formation of new fat cells). One American Journal of Clinical Nutrition study found that men who drank green tea containing 136 milligrams of EGCG—what you'd find in a single 4-gram serving of matcha—lost twice as much weight than a placebo group and four times as much belly fat over the course of three months 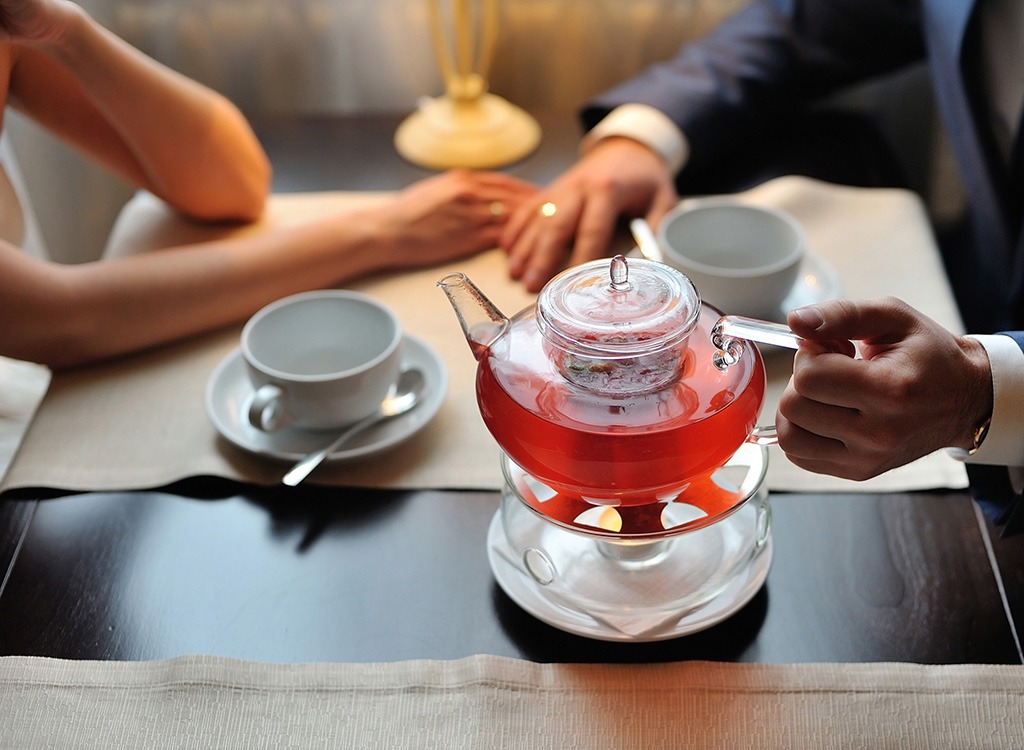 Before you head out to dinner, pour yourself a cup of green tea. The active ingredient in green tea, EGCG, boosts levels of cholecystokinin, or CCK, a hunger-quelling hormone. In a Swedish study that looked at green tea's effect on hunger, researchers divided up participants into two groups: One group sipped water with their meal and the other group drank green tea. Not only did tea-sippers report less of a desire to eat their favorite foods (even two hours after sipping the brew), they found those foods to be less satisfying. 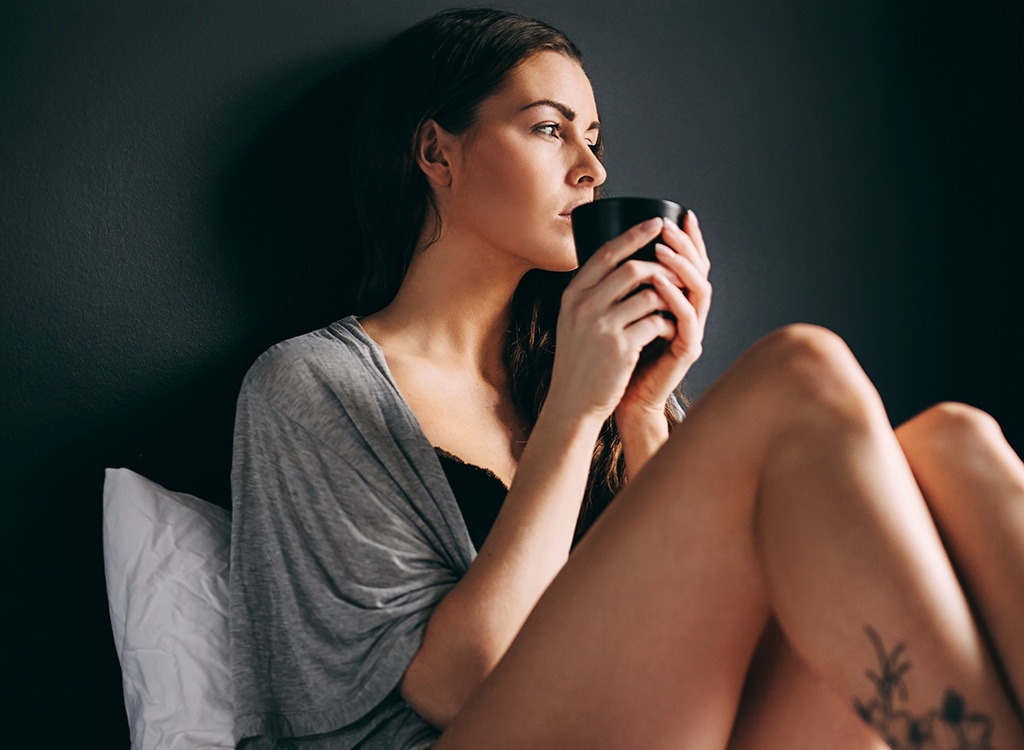 You probably already know that chamomile tea can help induce sleep (there's even a brand called Sleepy Time). But science is showing that teas actually work on a hormonal level to lower our agita and bring peace and slumber. Studies have found that herbal teas like valerian and hops contain compounds that can actually reduce levels of stress hormones in our bodies, bringing on sleep — and reducing the body's ability to store fat!

AND DRINK IT RIGHT WHEN YOU WAKE UP 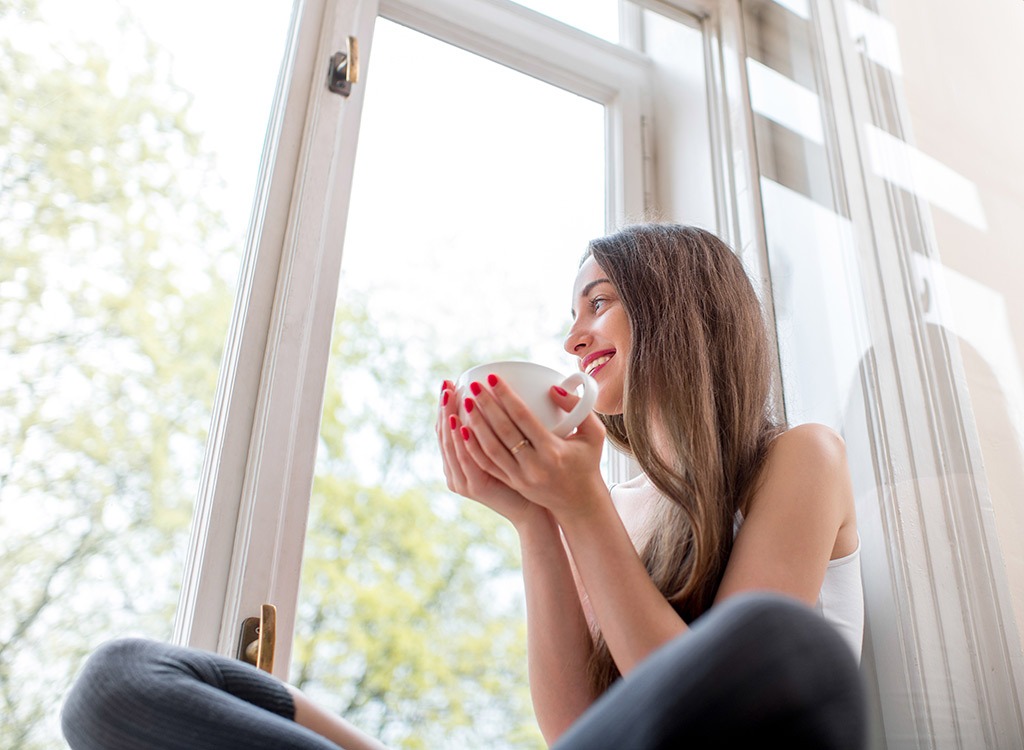 A study in the International Journal of Molecular Science found that fasting overnight, followed by green tea intake (at least 30 minutes before your first meal of the day), allowed for the best possible absorption of EGCG, the magic nutrient in green tea.

DRINK RED WHEN YOU'RE SEEING RED

Red tea, also known as rooibos, is a great choice for when you're struggling with midday stress. What makes rooibos particularly good for soothing your mind is the unique flavanoid called Aspalathin. Research shows this compound can reduce stress hormones that trigger hunger and fat storage and are linked to hypertension, metabolic syndrome, cardiovascular disease, insulin resistance and type 2 diabetes.

MEET A FRIEND FOR TEA 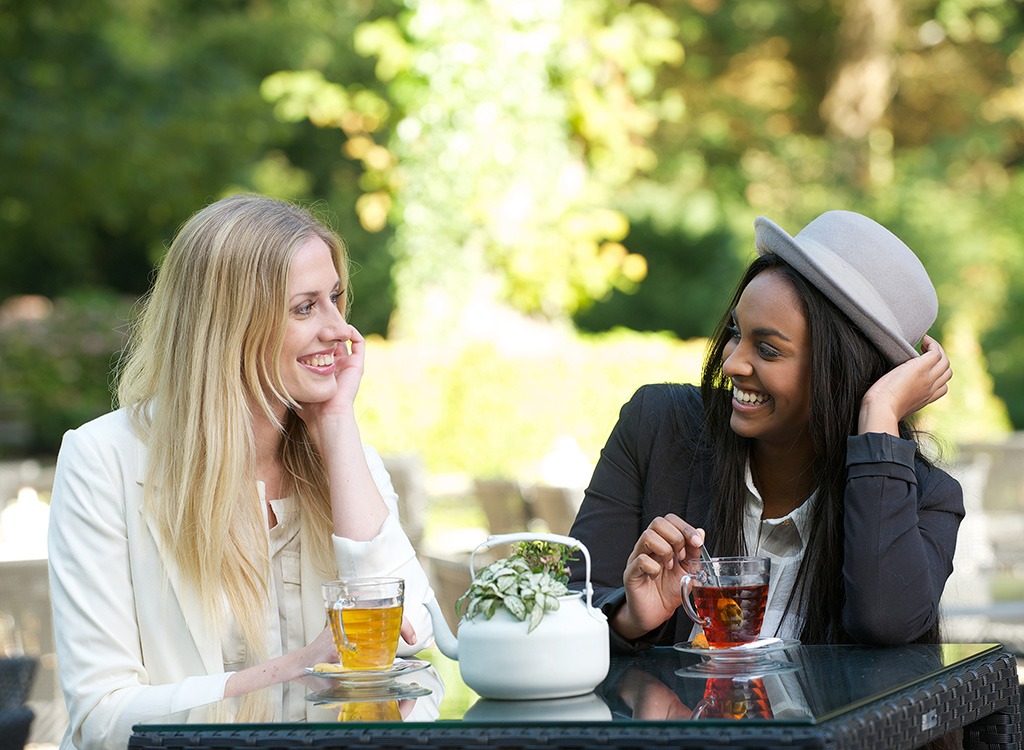 A new study in the journal Hormones and Behavior found that those who feel lonely experience greater circulating levels of the appetite-stimulating hormone ghrelin after they eat, causing them to feel hungrier sooner. Over time, folks who are perennially lonely simply take in more calories than those with stronger social support networks.

KEEP IT IN THE DARK

The active ingredients in teas are highly unstable under sunlight. Keep tea in a dark, dry place. Storing tea in sealed packaging in cool, dark conditions helps increase shelf life. If you brew iced tea, it will stay good for about 4 days, as long as you keep it refrigerated. 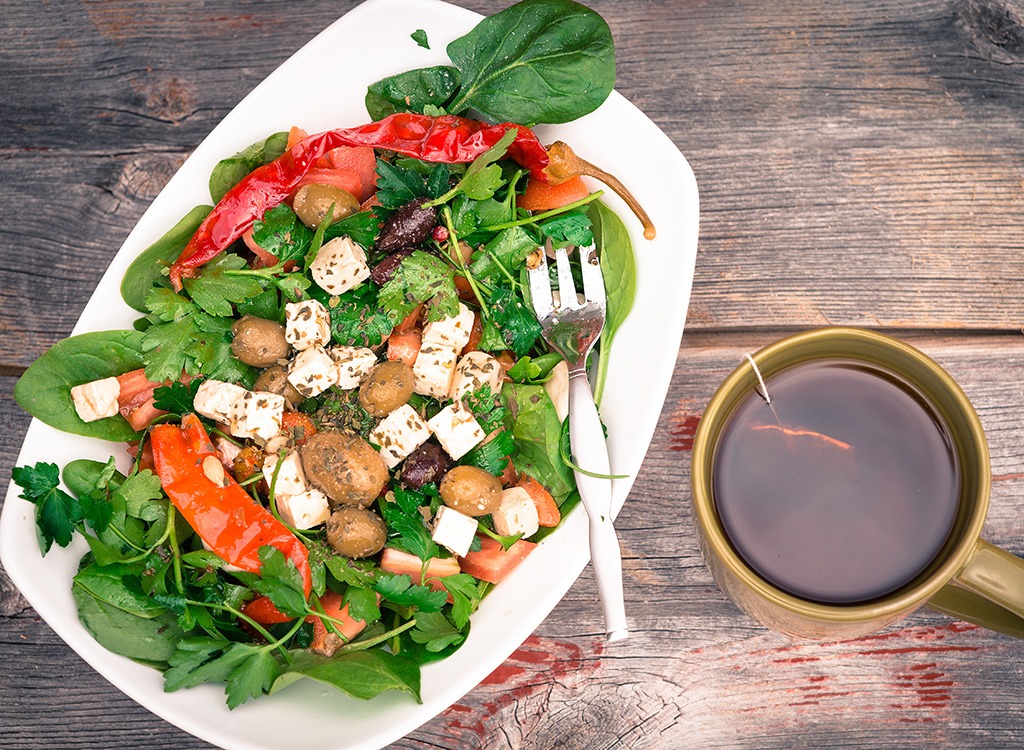 To add the power of green tea's catechins on top, steep tea bags in oils (or vinegar) to create richly flavored salad dressings. A study in Nutrition Journal found that those who ate monounsaturated fats at lunch reported a 40 percent decreased desire to eat for hours afterward. Check out these delicious recipes using matcha green tea!

BLEND IT INTO A SMOOTHIE

Green or white teas make great bases for smoothies. In a study in Current Nutrition and Food Science, replacing two meals a day with a smoothie led overweight and obese patients to lose weight as well as curbed cravings.

TOSS IN SOME CHIA SEEDS

These little black morsels of nutrition are packed with fiber, protein and, most important of all, omega-3 fatty acids. Pair chia seeds with green tea in a smoothie to turbocharge the tea's fat-burning powers. According to a study review in the International Journal of Molecular Sciences, omega-3 polyunsaturated fatty acids may enhance not only the bioavailability of EGCG but also its effectiveness.

COOK YOUR OATMEAL IN IT

Why not empower rice, quinoa, and even oatmeal with the belly-fat burning properties of green tea? Instead of cooking your grains in regular water, tie 4 green tea bags onto a wooden spoon, fill a small pot with 2 cups water, and add the wooden spoon and tea bags. Bring the water to a boil and remove tea bags. Add the grains to the boiling tea water and cook as directed.

PEPPER UP YOUR MEALS

When you drink tea with a salad or soup, make an effort to add some black pepper to your meal. A study in the International Journal of Molecular Sciences indicates that a compound found in black pepper, called piperine, may help improve blood levels of EGCG by allowing it to linger in the digestive system longer — meaning that more of it is absorbed by the body. 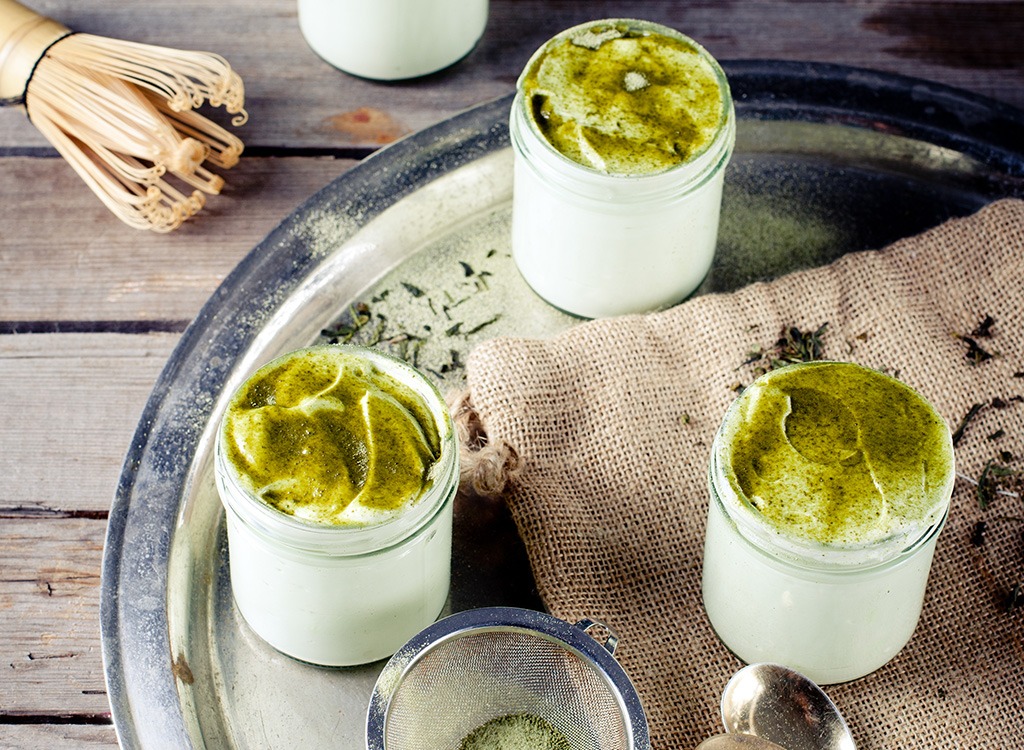 Yogurt is a great weight-loss food — until you start adding flavoring to it. Fruit-on-the-bottom yogurts can have as many sugar calories as a candy bar. For a fast boost of flavor, stir matcha powder into plain, full-fat Greek yogurt. 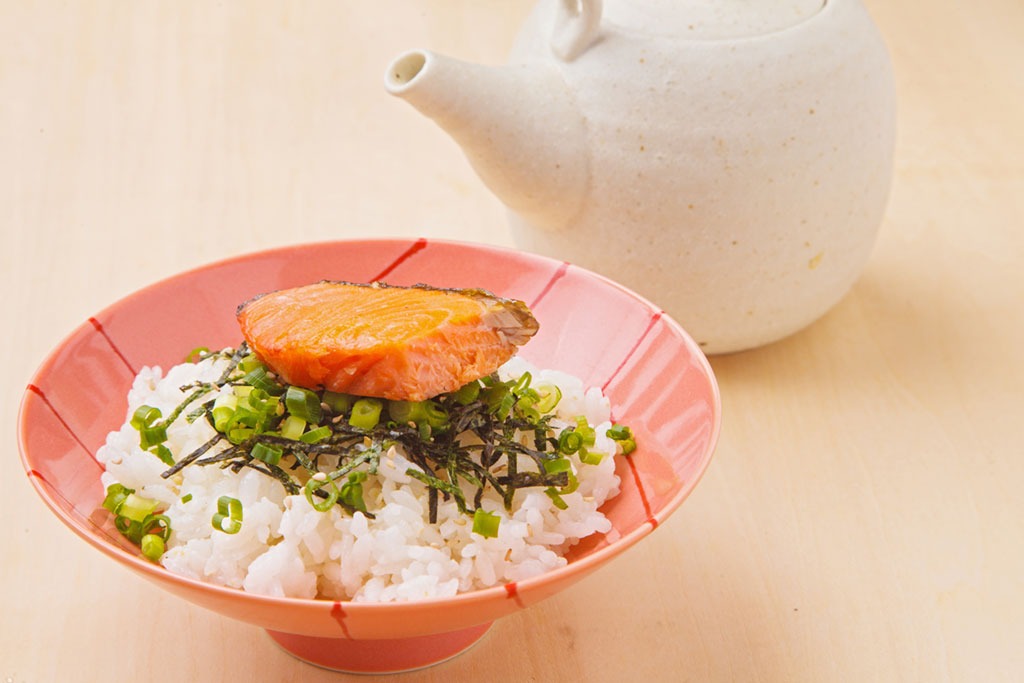 Ochazuke is a quick foodie trick from Japan. It's made by pouring a cup of hot green tea over a bowl of leftover rice, then topping the bowl with savory ingredients to create a terrific slim-down lunch. Place the rice in a bowl. Pour the hot tea over it. Top with crackers, flaked salmon, seaweed, lime juice, and soy sauce.

Filed Under
How To Lose Weight // Tea // Weight Loss Tips