Eat This, Not That! From Trader Joe's

Shopping at Trader Joe's is a good start. Knowing exactly which foods are best is better.

There is so much to love about Trader Joe's. The well-known supermarket chain carefully selects the products they sell and often sells items in sizes that make sense for small families or single people. Trader Joe's also carries a wide variety of organic and GMO-free foods, which makes them a popular alternative to pricier specialty stores. Perhaps the best part about Trader Joe's is its selection of inexpensive wine, including their famous $2 bottles. The chain is also on top of food trends and health news; be on the lookout for these 20 Weight-Loss Superfoods You're Not Eating!

While many of the food options at Trader Joe's are both good and good for you, it is easy to get fooled by items that initially seem healthy but are high in calories, fat, or sugar. Next time you find yourself joining the other Trader Joe's loyalists, use this handy shopping guide to find the items that will keep you happy and healthy. 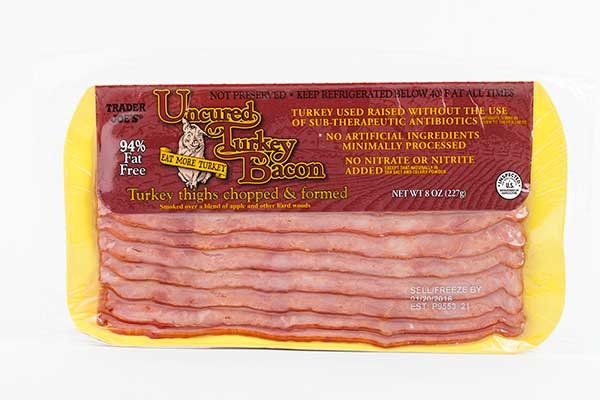 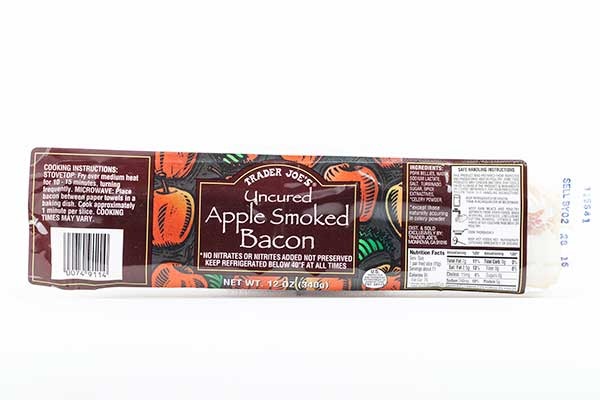 It's undeniable: nearly everyone loves bacon. Even thinking about bacon can get your mouth watering. But that delicious flavor comes with a high price. Bacon is full of saturated fat and sodium. A few pieces of bacon can make an otherwise healthy, low-fat breakfast one that will do major damage to your waistline. Instead of buying the Trader Joe's Apple Smoked Bacon, reach for the Uncured Turkey Bacon. Not only does Apple Smoked Bacon contain 7 grams of fat per slice but nearly 40 percent of the fat is saturated fat. Even hamburger meat has a lower percentage of saturated fat than that! Turkey bacon has no saturated fat and fewer calories, making it the best choice for a healthier, low-calorie breakfast. Speaking of breakfast, check out these 30 Best Breakfast Habits to Drop 5 Pounds! 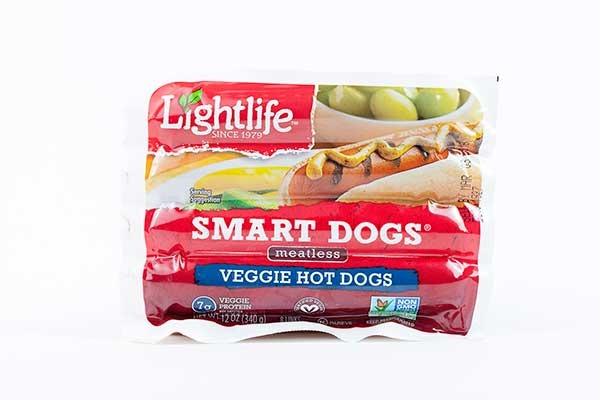 Not That! Trader Joe's Soy Chorizo 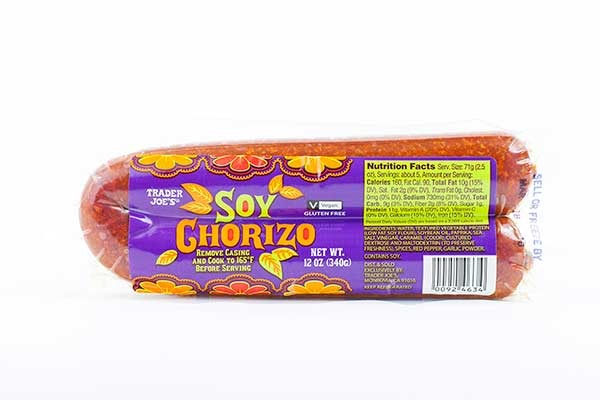 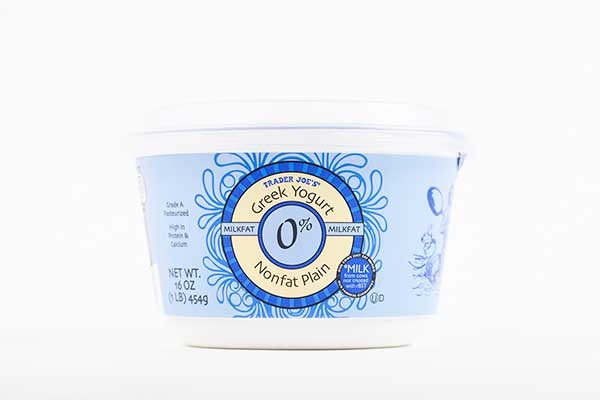 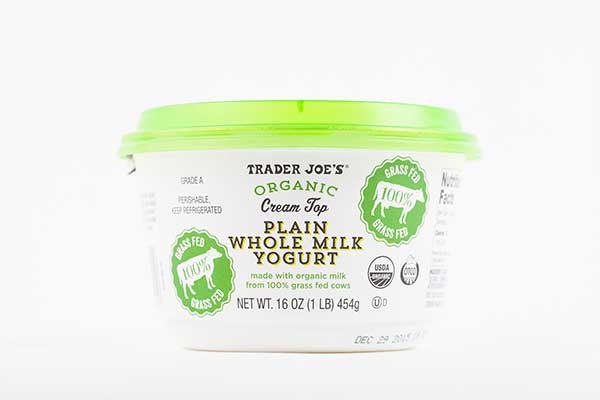 When choosing between plain yogurt options, grab the Greek. Not only is Trader Joe's Nonfat Greek yogurt completely fat free but it also contains more than double the amount of protein than the whole milk variety. You should go Greek for other reasons, too: It contains significantly less sugar, sodium, and cholesterol. By comparison, the Whole Milk Yogurt has more fat and sugar than a jelly doughnut. How does Greek yogurt taste so creamy while being so good for you? I'm not sure; it's all Greek to me. 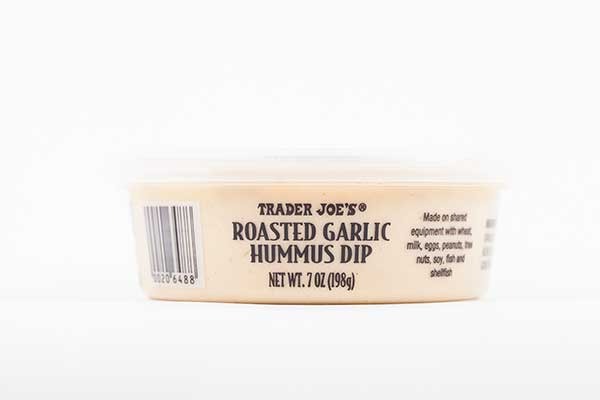 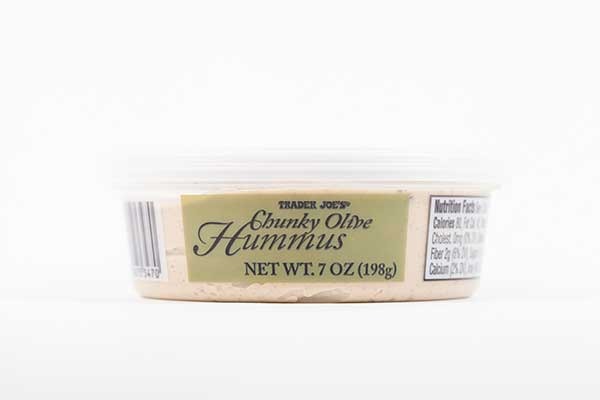 Hummus is an excellent healthy dip for vegetables and crackers. Thankfully, Trader Joe's carries a wide variety of flavored hummus options to choose from, but some are healthier than others. If you want some extra flavor in your hummus, choose garlic over the olive. The garlic variety has half the amount of fat and 30 fewer calories. That should make you feel a lot less guilty when you give in to your hummus cravings and eat it straight out of the tub. 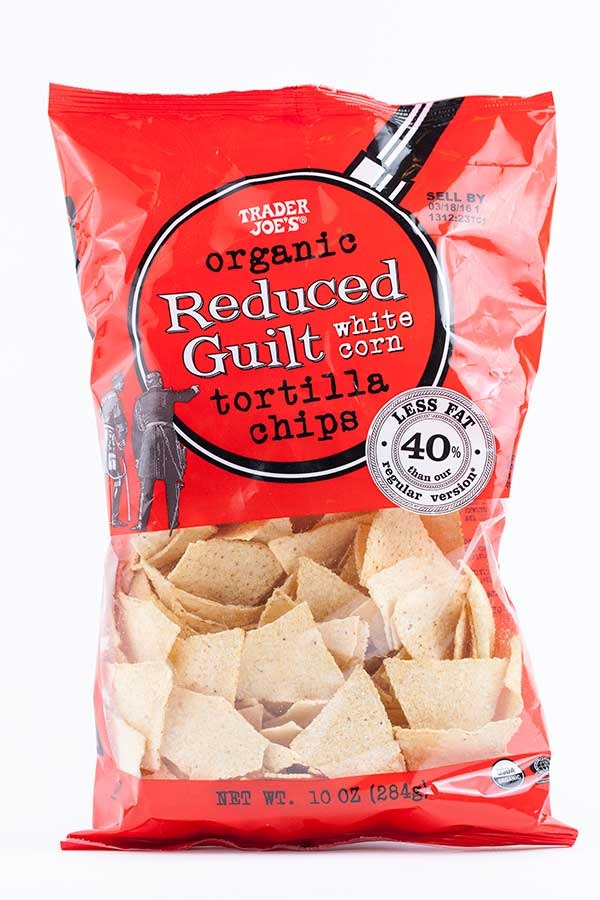 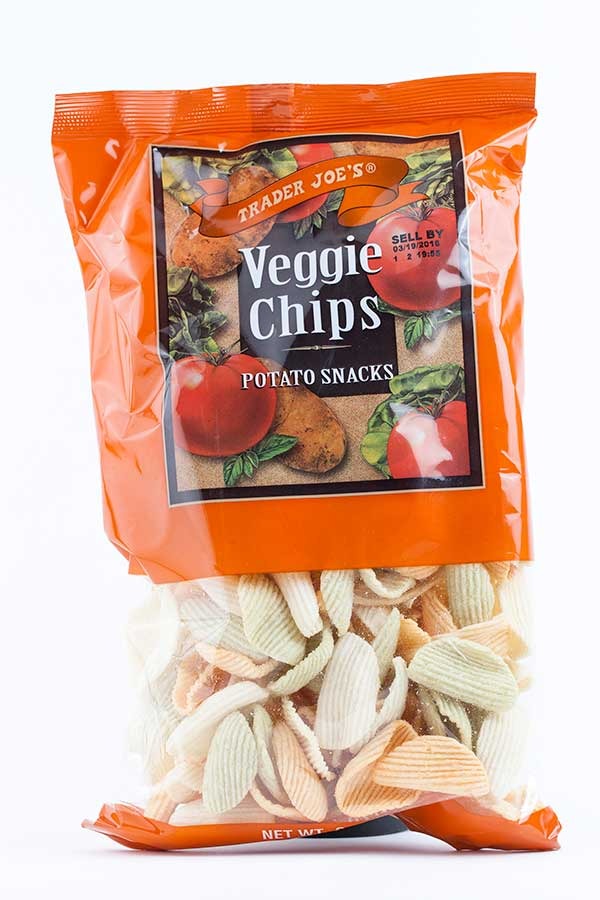 Don't be fooled by the picture of vegetables on the packaging of Trader Joe's Veggie Chips. The chips are mostly made of potatoes and oil, not vegetables. In fact, the veggie chips have the same amount of fat and calories and regular potato chips. If you're looking for something crunchy that can also scoop up some guacamole, you're better off with the Reduced Guilt tortilla chips, which contain fewer calories and half the fat of the veggie chips. Of course, you could snack on actual vegetables instead, but what's the fun in that? For more quick and straight-forward answers about what's good or bad for your waistline, check out these 50 Questions About Weight Loss Answered in 5 Words or Less! 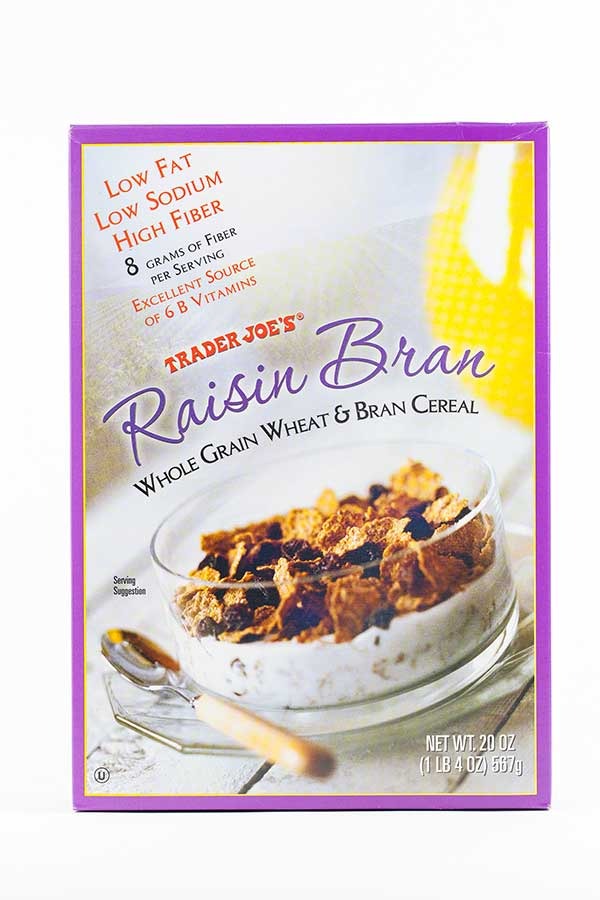 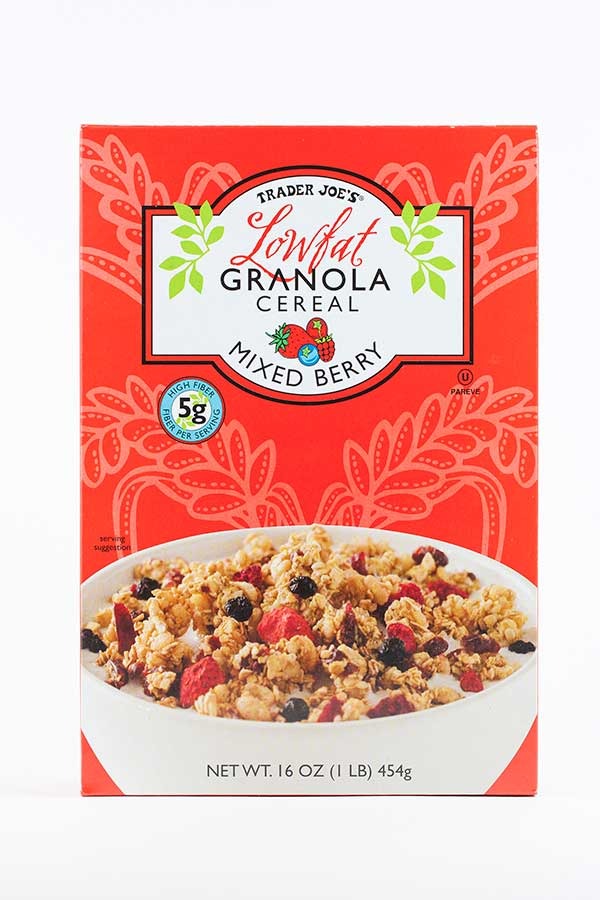 When buying cereals, it is important to pay attention to nutrition information and not just promises made on the product packaging. Trader Joe's Lowfat Granola Cereal may contain less fat than regular granola, but if you're looking to reduce fat and sugar intake, Raisin Bran is a much better option. It contains less sugar and half the fat than the Lowfat Granola. I heard it on the grape vine that Raisin Bran also has more fiber, which can help you feel fuller faster. 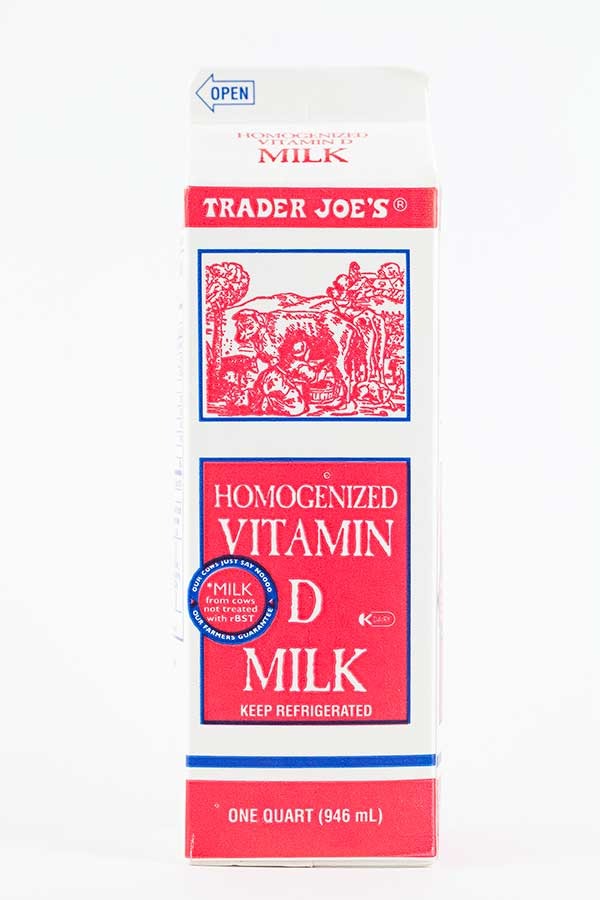 Not That! Summerhill Dairy Goat Milk 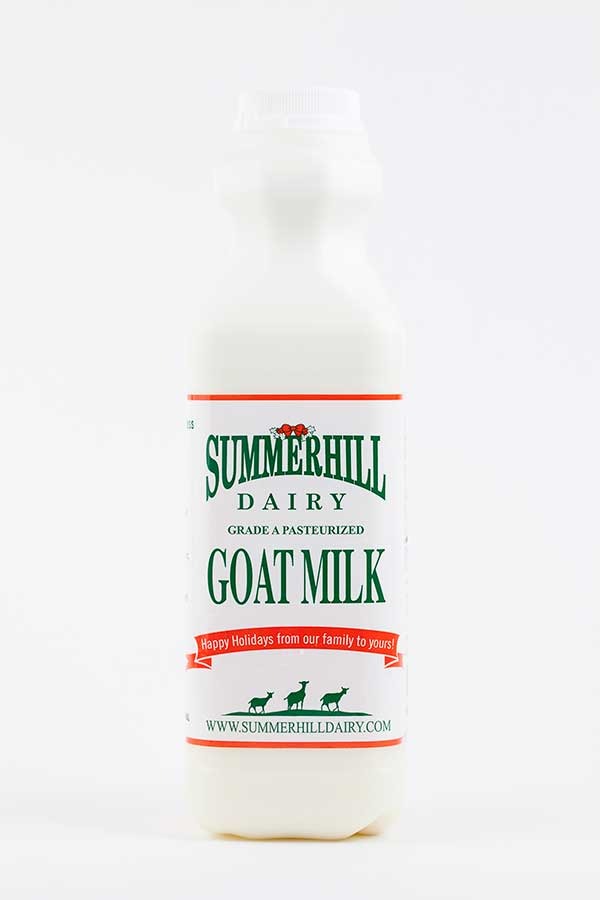 Some people prefer to buy goat milk over cow milk because it contains lower levels of lactose and may be easier on the stomach for people who are lactose-sensitive. If you do not suffer from a lactose sensitivity, plain old full milk is a lower-calorie and lower-fat option. Cow's milk is less fattening than goat milk? I know, it's too good to be true, but you've goat to believe it. If you want to cut even more fat and calories from your milk, reach for reduced fat or nonfat milk options. 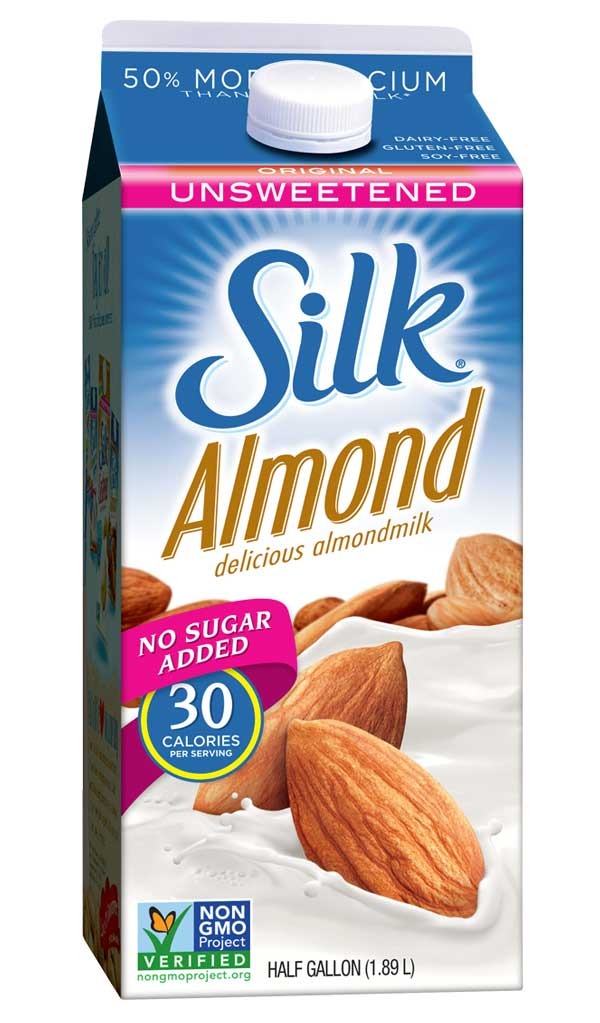 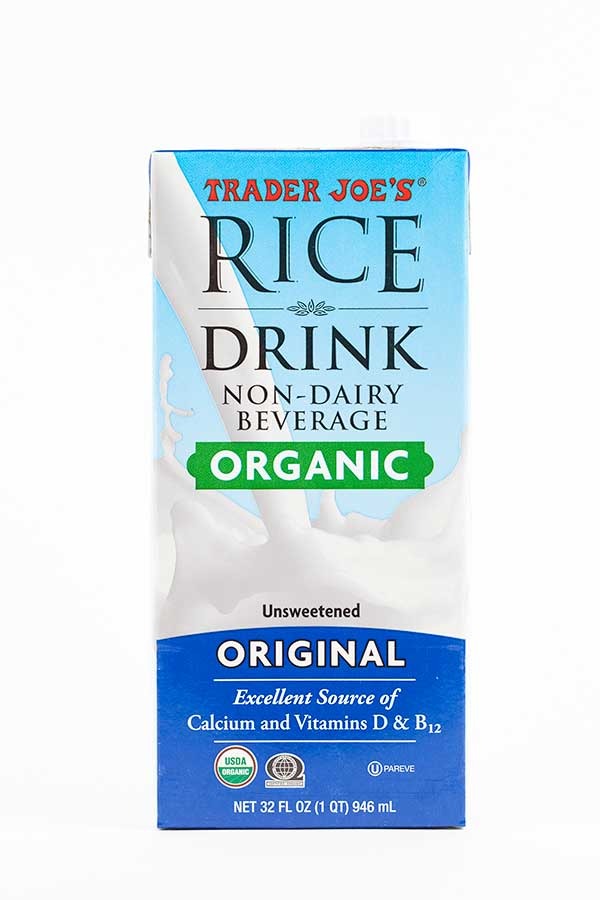 People tend to be very loyal to their milk alternatives. Traditionalists stick to soy milk; others claim that soy can cause its own set of health problems or say to avoid soy because most U.S. soybeans are genetically modified. If you're one of the many people looking for a soy-free and lactose-free milk, Trader Joe's offers two main options: rice milk and almond milk. The best choice among these options is almond milk. Rice milk contains 10 grams of sugar per cup, which is the same amount of sugar that's in a Krispy Kreme doughnut. Almond milk has no sugar and one-fourth of the calories, which makes it a great option for people interested in keeping off the pounds. 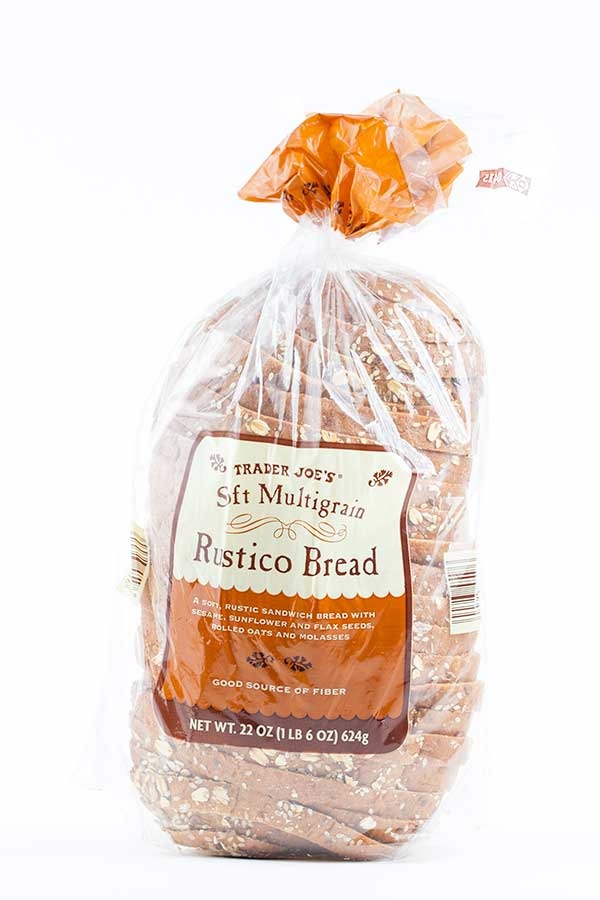 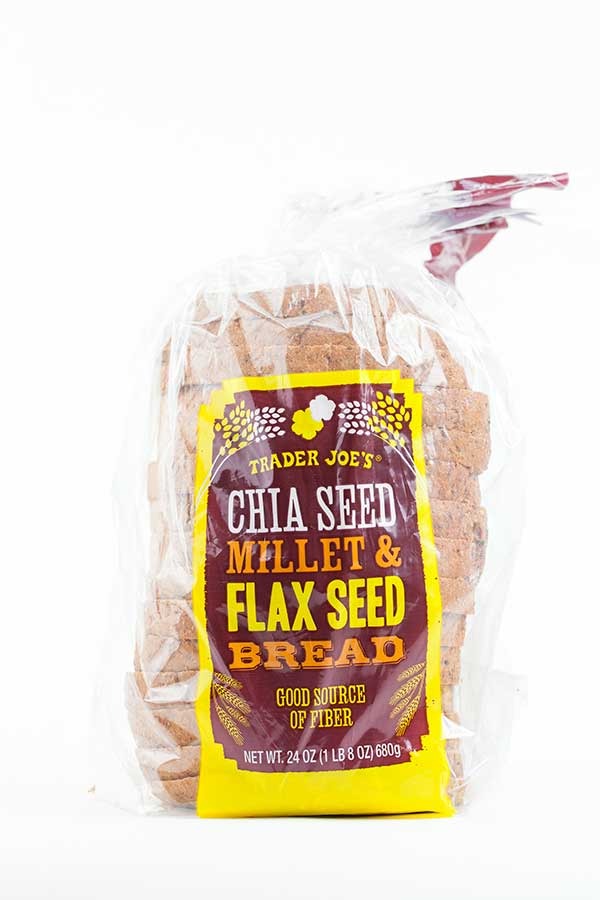 There's no magic in creating a lower calorie bread: The smaller the slice, the fewer calories. That's exactly why it's important to pay attention to nutrition labels on sliced bread. Even bread options that seem healthy can be high in calories because the slices are thicker. For example, the Trader Joe's Soft Multigrain Rustico bread has a 28 gram slice and each slice is only 70 calories. By comparison, Trader Joe's Chia Seed, Millet & Flax Seed bread, initially sounds healthy but has a 42 gram slice and each slice contains 140 calories, double the amount per Rustico slice. Even on a per gram basis, Rustico is a better choice. You probably won't even notice the thinner slice. Love bread? Then you'll love these 20 Secrets for Eating Bread Without Getting Fat! 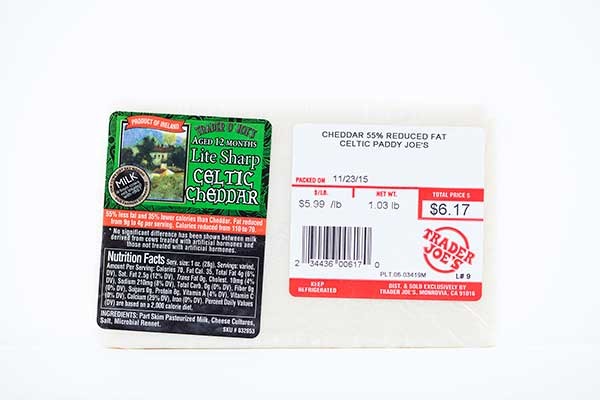 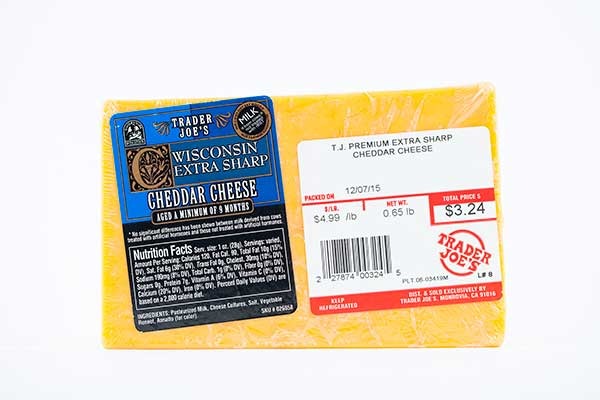 This is one instance in which you should definitely believe the product packaging. Trader Joe's Lite Sharp Celtic Cheddar is truly light. It has 55 percent less fat and 35 percent fewer calories than regular cheddar. You won't miss the extra fat and calories. The lite cheddar tastes just as good and will make a great topping for your nachos or homemade pizzas.

Eat This! Trader Joe's Just A Handful Of Oh My! Omega Trek Mix 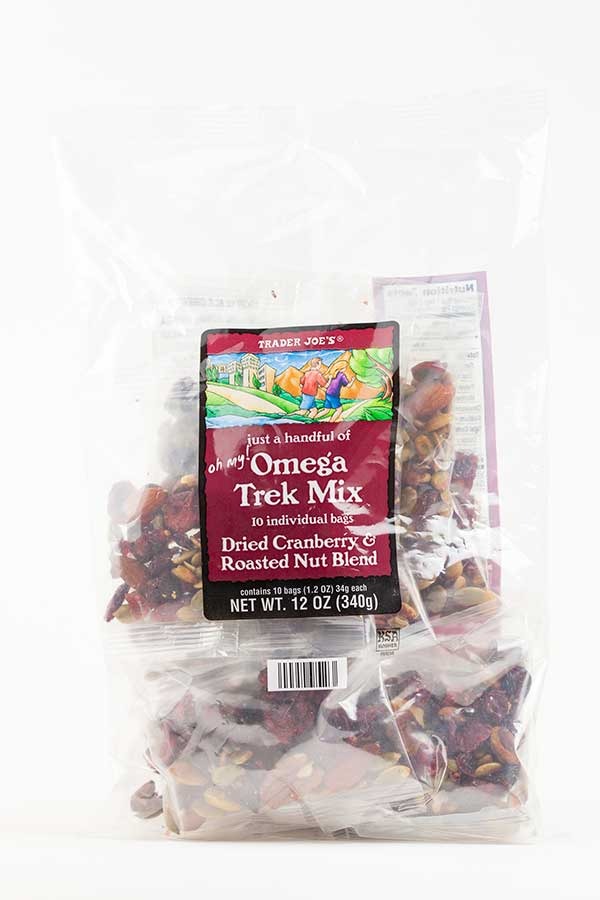 Not That! Trader Joe's Handfuls of Tempting Trek Mix 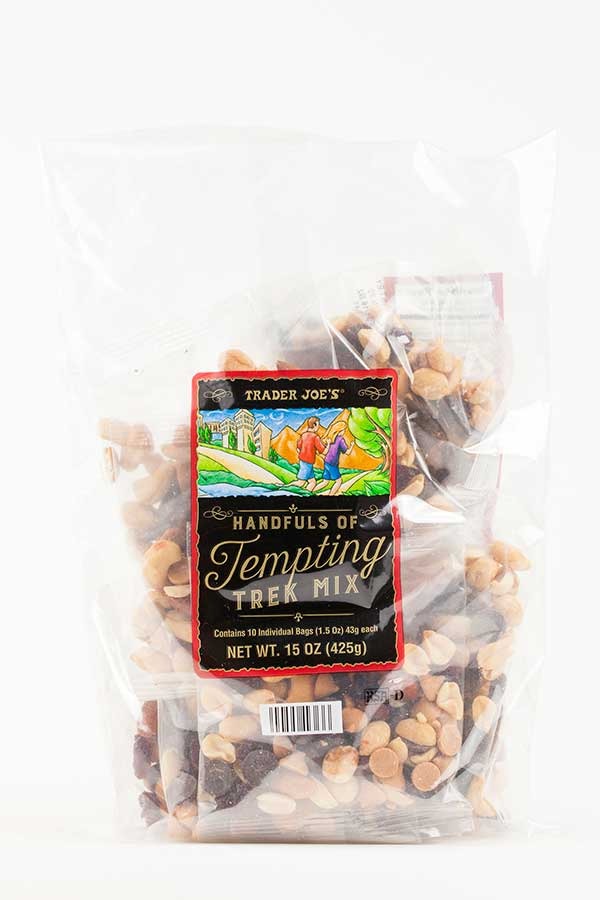 If there's one food product that Trader Joe's excels in, it is trail mix. You can choose from a wide variety of delicious mixes that contain everything from dried cranberries to chocolate to pumpkin seeds. But be careful: Trail mix is not the best snack food for people on low calorie or low fat diets. But if you love trail mix, help control your portions by picking up one of Trader Joe's pre-portioned "handfuls" trail mix options. Per bag, the handfuls of Omega Trek mix is best. A bag of the Tempting Trek mix is higher in calories, fat, and sugar. 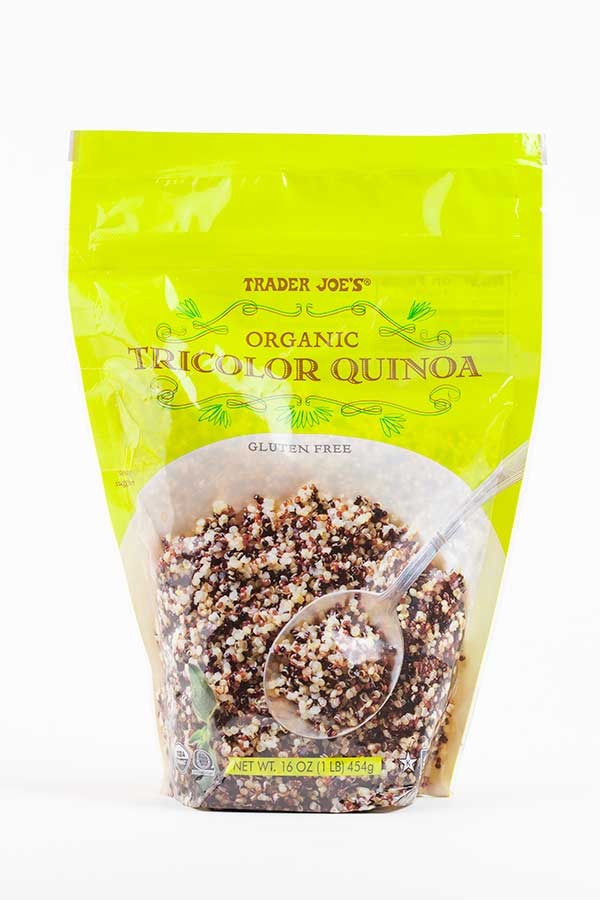 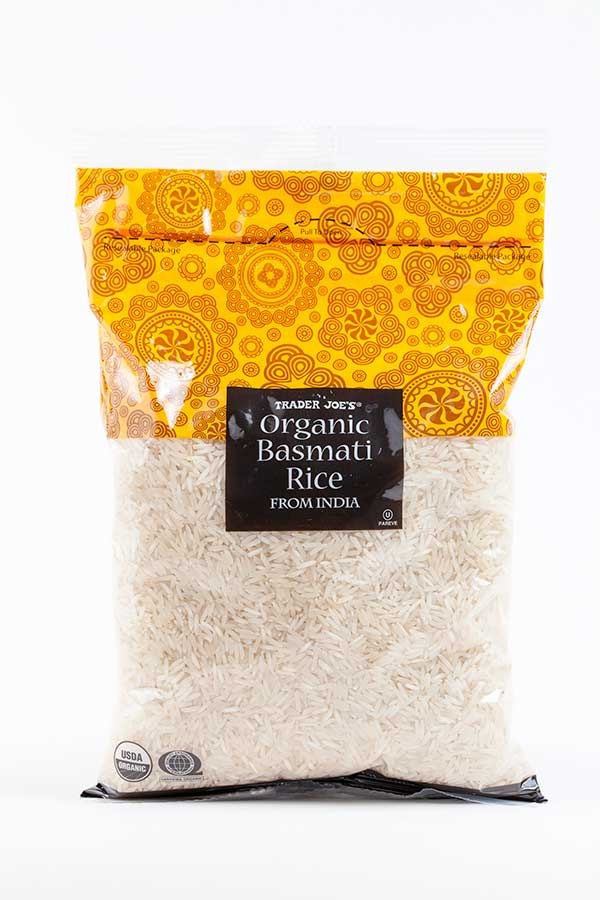 Quinoa has shot up in popularity and more people are using it in place of rice and potatoes because of its high fiber and protein content. And have you started enjoying quinoa breakfast bowls in the a.m. yet? Not only does quinoa contain more protein than rice, but it also is one of a few plant sources that's a complete protein, meaning that it contains all nine of the essential amino acids which cannot be made by the body. At Trader Joe's, instead of reaching for the Basmati Rice, try the Tricolor Quinoa, which has three times the fiber and 50 percent more protein.

Eat This, Not That!
Inspired by The New York Times best-selling book series, Eat This, Not That! is a brand that's comprised of an award-winning team of journalists and board-certified experts, doctors, nutritionists, chefs, personal trainers, and dietitians who work together to bring you accurate, timely, informative, and actionable content on food, nutrition, dieting, weight loss, health, wellness, and more. Read more about Eat This
Filed Under
Trader Joes