Thunder God could be the answer to your weight loss goals.

By the beard of Zeus, this is big news: Harvard researchers experimenting with the traditional Chinese medicinal plant Thunder God discovered that it may be a powerful appetite suppressant that could lead to a significant weight loss breakthrough.

"It could be a powerful way to treat obesity and improve the health of many patients suffering from obesity and associated complications, such as heart disease, fatty liver and type 2 diabetes," says study author Umut Ozcan, M.D., an endocrinologist at Boston Children's Hospital and Harvard Medical School.

Thunder God works by enhancing the action of leptin, an appetite-suppressing hormone that sends signals to the brain when a person is full and should stop eating, according to the study published in Cell. Researchers have previously speculated that a lack of sensitivity to leptin may be a root cause of obesity. In the study, researchers found that obese mice that were given high doses of Thunder God extract for one week ate 80 percent less food compared with mice that did not receive the compound. After three weeks, the mice treated with the compound lost 45 percent of their body weight, while the comparison group lost no weight at all.

While it's not yet clear whether the plant, traditionally used by Chinese doctors to treat arthritis, has the same leptin-enhancing effects on humans, there are a number of commonly used herbs that are most likely already in your kitchen which have clear weight-loss benefits as well—and you probably have a few of these in your kitchen already.

A study published in the journal Nutrition and Metabolism showed that white tea can simultaneously boost lipolysis (the breakdown of fat) and block adipogenesis (the formation of fat cells). The tea's combination of caffeine and epigallocatechin-3-gallate (EGCG) seems to set fat cells up for defeat.

One study published in the Journal of Neurological and Orthopaedic Medicine found that people who sniffed peppermint every two hours lost an average of 5 pounds a month. The mint flavors send signals to your brain that it's time to stop eating.

Oolong, a Chinese name for "black dragon," is a light, floral tea that, like green tea, is also packed with catechins, which help to promote weight loss by boosting your body's ability to metabolise lipids (fat). A study in the Chinese Journal of Integrative Medicine found that participants who regularly sipped oolong tea lost six pounds over the course of the six-week time period. That's a pound a week!

The leafy green you typically push off to the side of your plate is a secret superfood that's more nutrient-dense than kale. Among its key nutrients is folate, a B vitamin that's been linked to everything from boosting mood to battling cancer. It's also a key that works on a genetic level, locking down genes linked to insulin resistance and fat-cell formation. "It's the B vitamins that play a major role in epigenetics, especially B12 and folate," says Kevin L. Schalinske, Ph.D., professor in the Department of Food Science and Human Nutrition at Iowa State University. 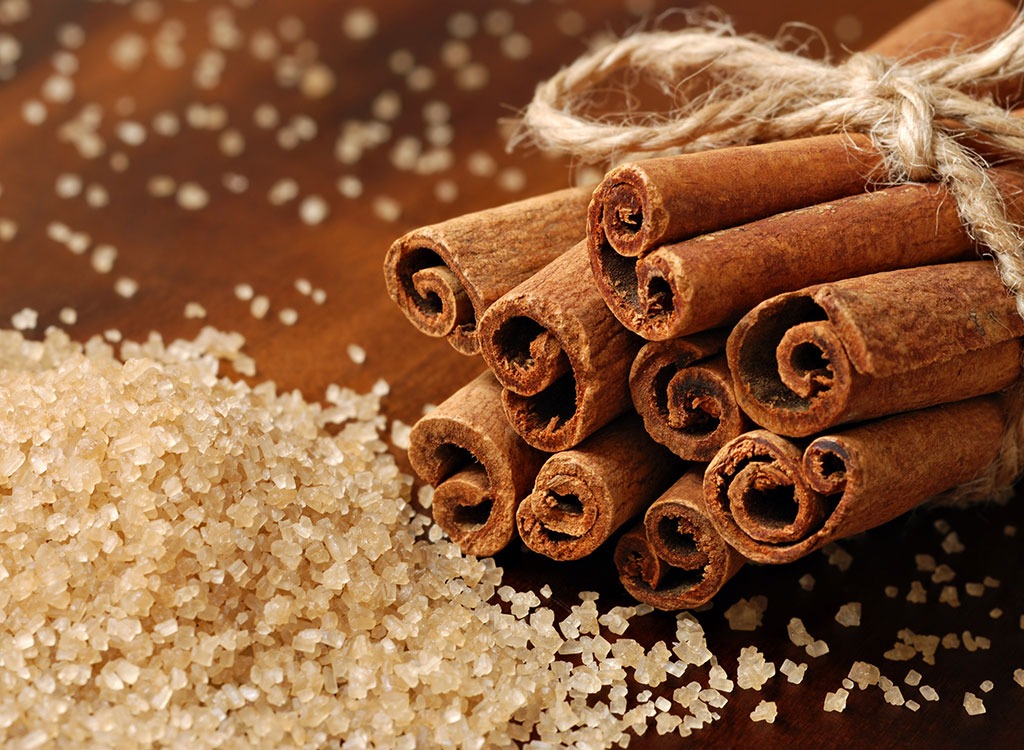 Cinnamon contains powerful antioxidants called polyphenols that are proven to alter body composition and improve insulin sensitivity. An animal study printed in Archives of Biochemistry and Biophysics showed that the addition of dietary cinnamon reduced the accumulation of belly fat. And a series of studies printed in the American Journal of Clinical Nutrition found that adding a heaping teaspoon cinnamon to a starchy meal may help stabilize blood sugar and ward off insulin spikes.

Piperine, a powerful compound found in black pepper, has been used for centuries in Eastern medicine to treat multiple health conditions including inflammation and tummy troubles. But recent animal studies have found that piperine may also have the profound ability to decrease inflammation and interfere with the formation of new fat cells—a reaction known as adipogenesis, resulting in a decrease in waist size, body fat, and cholesterol levels.

Scientists at England's Oxford Polytechnic Institute found that by eating 1 teaspoon of mustard (about 5 calories) can boost the metabolism by up to 25 percent for several hours after eating. Not only that, a study published in the Asian Journal of Clinical Nutrition found that visceral adipose tissue of rats fed a diet of pure lard was lowered when the diet was supplemented with mustard oil.

Eat This, Not That!
Inspired by The New York Times best-selling book series, Eat This, Not That! is a brand that's comprised of an award-winning team of journalists and board-certified experts, doctors, nutritionists, chefs, personal trainers, and dietitians who work together to bring you accurate, timely, informative, and actionable content on food, nutrition, dieting, weight loss, health, wellness, and more. Read more about Eat This
Filed Under
Weight Loss Foods // Weight Loss Tips