The Worst Breakfasts for Your Waistline

Breakfast: It's not just for breakfast anymore.

Recently, food marketers have noticed a new trend. Even as younger consumers have become more kale-curious and health-conscious, they are still clamoring for one particular type of fast food: breakfasts. In response, Taco Bell introduced an A.M. menu—including the new and terrifying Biscuit Tacos, where half the calories come from fat. McDonald's, meanwhile, announced it was going to experiment with serving Egg McMuffins and pancakes all day long.

The media dubbed this battle for your dollar "The Breakfast Wars"—but you may be the true casualty.

Breakfast can be a good thing. Studies show that people who take time for a morning meal consume fewer calories over the course of the day, have stronger cognitive skills, and are 30 percent less likely to be overweight or obese. But when food marketers get their hands on it, "a hearty breakfast" turns into something more like "a heart-breaking breakfast," because much of what's on offer at America's restaurants—and the grocery aisles—is a collection of fatty scrambles, misguided muffin missiles, and pancakes that look like manhole covers.

It's time for a wake up call. Eat This, Not That! magazine editors searched out the good, the bad, and the greasy and put together this special report: The Worst Breakfast Foods in America 2015! Read it, share it, and then start losing weight even before breakfast, with these essential 14 Ways to Wake Up With Zero Belly! 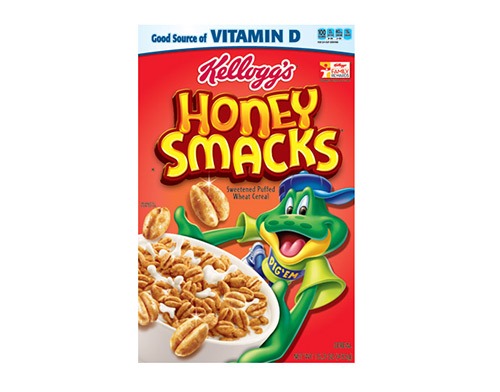 That's the Sugar Equivalent of: Scarfing a Mrs. Fields Chocolate Chip Cookie and calling it breakfast.

The Smacks mascot, Dig'em Frog, needs a smackdown: His cereal has more sugar than Tony the Tiger's, Fred Flintstone's or even Cap'n Crunch! Worse, each puff is coated with partially hydrogenated oil, a substance even fast-food chains are about to ban because they contain traces of trans-fats. Smacks also contain caramel color, which has been shown to increase the risk of cancer in animals and is a possible carcinogen for humans, too. General Mills just announced they'd be removing artificial colors from their cereals; ask Kellogg's to do the same.

Kix is the safest of all sweet cereals, and go great with blueberries. 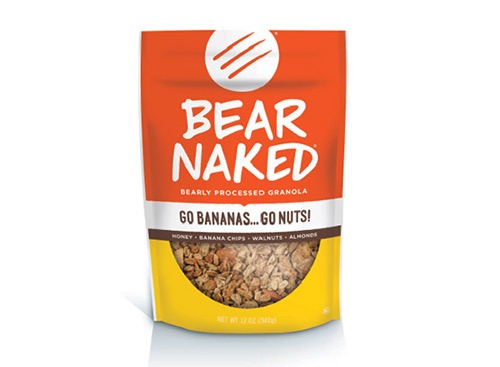 That's the Fat Equivalent of: a Dunkin' Donuts Blueberry Muffin in a bowl—except this granola has more saturated fat!

Granola may be the most overrated breakfast food of all time. What do you think is holding all those banana-y clumps together? Sugar and oil. And 4 grams of fiber just isn't enough to save this bowl. Studies have shown that if you eat more fiber at breakfast, you'll consume fewer calories throughout the day.

It's called All-Bran! This is as fiber-rich as it gets, with a touch of sweetness, too. And to get even healthier, melt up to 10 pounds of fat—in one week!—with our brand new weight-loss plan, The 7-Day Flat-Belly Tea Diet and Cleanse!

That's the Sugar Equivalent of: one serving of Ben and Jerry's Phish Food ice cream—except this doughnut has 130 more calories, 3 grams more fat and 22 more carbs!

Good doughnuts hover in the 200- to 300-calorie range, but Dunkin' Donuts has broken new barriers with this doughy disaster. At 420, it has more calories than a McDonald's Egg McMuffin with hash browns and nearly as much sugar as 5 bowls of Froot Loops. In fact, it's the highest-calorie doughnut out there—neither Krispy Kreme nor Tim Horton's have one that tops 400 calories. Speaking of numbers, here's another: The Blueberry Butternut has 44 ingredients, including Eat This, Not That! must-avoids like propylene glycol, preservatives and artificial flavors. And how many actual blueberries? Zero.

This has an equally-long list of artificial ingredients, but it's one of the lowest-calorie options at Dunkin' Donuts. Grab your coffee and get out—or better yet, power your morning with one of these Best Fast Food Smoothies for Weight Loss! 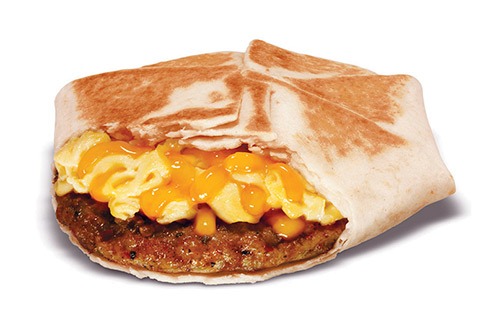 Taco Bell? For breakfast? The news made everyone laugh last year. But the joke's on you: Most items are more than 500 calories. For the Sausage Crunchwrap, the Bell found a way to stuff sausage and hash browns into this carb vessel, plus shredded cheddar cheese, a pile of eggs and 50 other ingredients, many unpronounceable. The Breakfast Wars are most brutal to your belly.

If you're south of the border, order the Egg and Cheese sandwich, sound advice at any fast food chain in the A.M. hours. This one has 12 grams of tummy-filling protein. 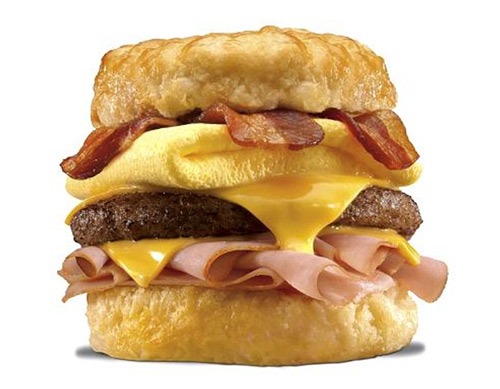 That's the Sodium and Fat Equivalent of: A 6″ Meat Lovers Personal Pan Pizza from Pizza Hut! In one sandwich!

This Monster monstrosity has three kinds of pork and more than a day's worth of sodium. From the bottom up, you'll find ham, and then cheese, and then a sausage patty, and then more cheese, and then a folded egg, and then bacon, all between a fatty biscuit. A close second for Worst: The Jack in the Box Loaded Breakfast Sandwich, which has the same ingredients between sourdough bread, for the same amount of calories—but with far less sodium.

Every single breakfast option at Hardee's has too much sodium—unless you order the grits—but at least this one also has 19 grams of protein. Speaking of bad fast food, you won't believe which chains are selling you The Worst Burgers in America 2015!

That's the Calorie Equivalent of: A Bacon McDouble at McDonald's, yet without the benefit of its significant protein!

The worst part about this breakfast is that scores of health-conscious eaters (who somehow wandered into a Dunkin', perhaps for the coffee) order this thinking they're making a smart choice. No matter how healthy the bagel or its toppings may appear, there is just no escaping the fact that this one is bogus. In fact, you're unlikely to find any bagel combination at chain restaurants that register less than 400 calories, because most have refined carbs and low-grade fats. And start your day wrong when you reach for these other 7 Foods You Should Never Eat for Breakfast!

With 12 grams of protein and less sodium than in years past, this is a Dunkin' Do. 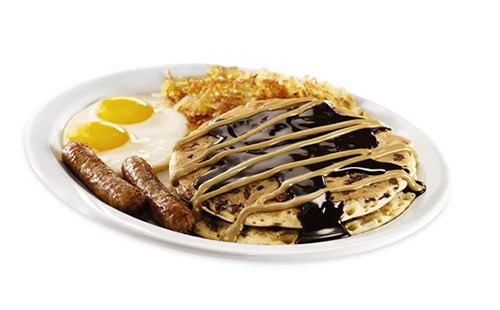 Wait, doesn't this belong on a list of the Worst Desserts in America? IHOP has New York Cheesecake Pancakes. Perkins sells ones called Apple Pie. But Denny's Peanut Butter Cup Pancake Breakfast out-sweets them all. They've stuffed two buttermilk pancakes with chocolate and white chocolate chips, and then topped it with hot fudge and peanut butter sauce. The result is a dish with more sugar than 5 servings of Edy's Ice Cream. (Throw in eggs, hash browns and two sausage links, and the sodium count soars, too.) Craziest part: They offer maple syrup on the side. 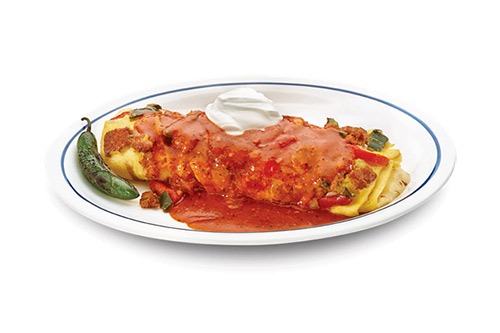 But if you also order the accompanying side of pancakes and syrup, it's 1,990 calories and 42 grams of saturated fat.

That's the Sodium Equivalent of: Eating 273 Cheetos for breakfast

IHOP was one of the last chains to release its nutritional numbers, and given the national-debt-level calorie counts of much of its menu, we can see why. This overstuffed omelette is bursting with chorizo, roasted peppers, pepper jack cheese and onions and then smothered in sour cream and chili sauce. Throw in the three additional pancakes, and you've got a "healthy" meal with a day's worth of calories. Pick the Simple & Fit menu item and get your salty fix later—while saving 100s of calories—with these essential 10 Best Junk Foods for Weight Loss. 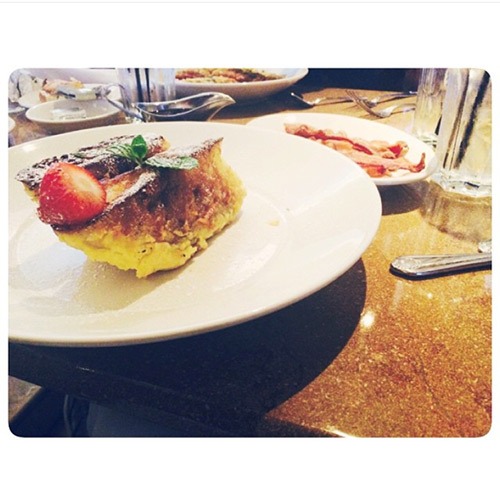 That's the Saturated Fat Equivalent of: 6 Sonic cheeseburgers, and the calorie equivalent of 40 Dunkin Donuts' Munchkins.

Speaking of dessert for breakfast! This "rustic" dish will rust your arteries. It has a full day's worth of sodium, more than a day's worth of calories, three to four days worth of sugar and a week's worth of saturated fat. Cheesecake Factory won't reveal the total fat count—maybe because they can't count that high? Meet the absolute Worst Breakfast in America.

DON'T DIET. EAT! Discover 1,000s of slimming swaps and tasty recipes in the new Eat This, Not That! magazine—subscribe now and get half off plus a free cookbook!

Eat This, Not That!
Inspired by The New York Times best-selling book series, Eat This, Not That! is a brand that's comprised of an award-winning team of journalists and board-certified experts, doctors, nutritionists, chefs, personal trainers, and dietitians who work together to bring you accurate, timely, informative, and actionable content on food, nutrition, dieting, weight loss, health, wellness, and more. Read more about Eat This
Filed Under
Breakfast // Foods To Avoid