Want to shrink your belly? Start eating bugs. This isn't a Fear Factor flashback: Probiotics, the helpful good bacteria in your digestive tract, play an essential role in maintaining a healthy weight.

When your good gut bugs are depleted, bad bacteria take over, causing inflammation. That switches on your fat genes, leading you to gain more weight than someone eating the same amount of food and spending the same amount of time in the gym. In fact, overweight men and women were put on a calorie-restricted diet and given either a placebo or a probiotic supplement for 12 weeks, in a study published in the British Journal of Nutrition. Women who consumed the good bugs and fermented foods showed significantly higher weight loss. Twelve weeks later, the women kept losing weight, even if they'd stopped taking the supplements!

Probiotics are found largely in fermented foods, and the MVPs usually mentioned are yogurt, kefir and kimchi. But probiotic sources go way beyond breakfast and Korean BBQ; you can consume them as part of a wide variety of meals and snacks. Here are some of the best options for a flat stomach. 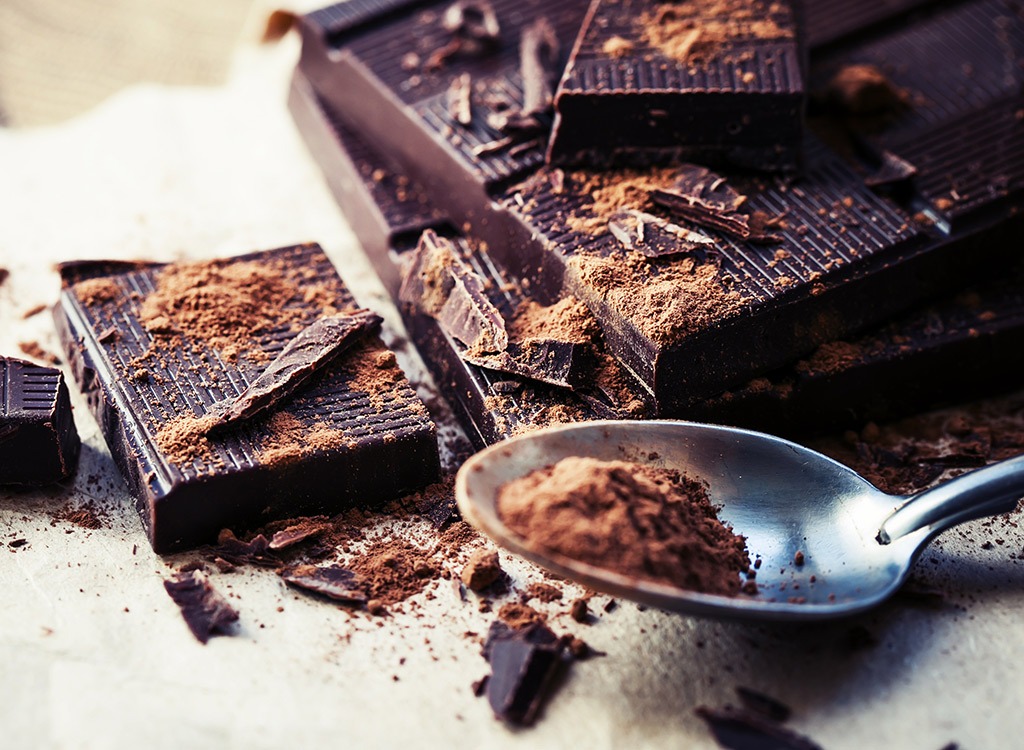 Dark chocolate is a dietary white knight. Chocolate-loving microbes in the gut convert the candy into anti-inflammatory compounds, researchers at the American Chemical Society found. When the cocoa reaches your belly's digestive juices and enzymes, it's feasted on by your belly's good gut bugs, which ferment it into anti-inflammatory compounds. Bingo: You lose belly bloat. (Dark chocolate also dilates blood vessels to lower blood pressure, which can lower your risk of stroke.) Look for a cacao content of 70 percent or above. The ACS researchers said the amount that seems to be beneficial is the equivalent of two tablespoons of cocoa powder a day, or three-quarters of an ounce of a chocolate (one square is about 1 ounce).
2

Spinach and kale have a bit of competition for green veg of the moment. But the dark horse of this drag race is the humble green pea. Japanese researchers found that green peas contain Leuconostoc mesenteroides, a potent probiotic that stimulates your immune system, in a 2014 study published in the Journal of Applied Microbiology. The peas produce lactic acid bacteria that protects the mucosal barrier, a.k.a. the body's second skin, which runs through your digestive tract and is the first line of defense against bad bugs and toxins. Make sure to skip soggy, salty canned peas and add fresh ones to your salads and omelets, or snack on them fresh.

This blue-green alga, available in powders and supplements, is super-rich in protein: It contains all necessary amino acids. Research into its probiotic properties is preliminary but promising. A study published in World Journal of Dairy and Food Sciences found spirulina effective in growing cultures of the helpful bug Lactobacillus acidophilus while killing harmful gut bacteria. Separate Japanese research found that it reduced diabetic kidney disease in rats, and a 2015 study printed in the journal Phytomedicine found it protected mice from H1N1 flu infection. And the green stuff may be able to flatten your belly by burning fat during exercise. Nine moderately athletic men took either spirulina capsules or a placebo for four weeks in a study printed in Medicine & Science in Sports & Exercise. Afterward, the men who had taken spirulina supplements were able to run 30 percent longer than the men who had taken a placebo and burned 11% more fat during a run!

Although sullied by its association with hot dogs, sauerkraut is fermented cabbage, and it contains natural compounds that have potent cancer-fighting and belly-slimming properties. Unpasteurized sauerkraut is one of a few fermented foods rich in the probiotic Lactobacillus bacteria — it even has more than yogurt! — which boosts the healthy flora in the intestinal tract and bolsters your immune system. But it will also boost your overall health: Mice fed this strain of bacteria isolated from Chinese sauerkraut had reduced cholesterol levels, in a study published in the World Journal of Microbiology and Biotechnology. And one cup packs 34% of your daily recommended dose of vitamin C and a solid, satiating 4 grams of fiber. Sauerkraut on the shelf will have been pasteurized and is, therefore, less effective; look for "live and active cultures" on the label.

These little green buggers have come a long way from their days as an unsung bar food: Lactobacillus plantarum and Lactobacillus pentosus have been isolated in olives, fed by the brine in which they're soaked, making the the ultimate fermented foods snack. And L. plantarum shows great potential for getting you that flat stomach you're after: This strain can balance your gut bugs and decrease bloating, particularly in people with irritable bowel syndrome, according to the American Society for Clinical Nutrition.
LOSE UP TO 16 POUNDS IN 14 DAYS with Zero Belly Diet—the New York Times bestselling book from Eat This, Not That! author David Zinczenko. Click here to discover more!