These 23 States Have an Alarming Rise in Coronavirus Cases

The week-on-week numbers are going in the wrong direction here.

With cities reopening, even states that have the coronavirus "under control" are seeing an alarming rise in cases—and, in some states, a rise in hospitalizations and deaths as well. Here are the 23 states seeing a rise in new cases—all data accurate as of this writing—compared to the previous week, according to data from Johns Hopkins University. 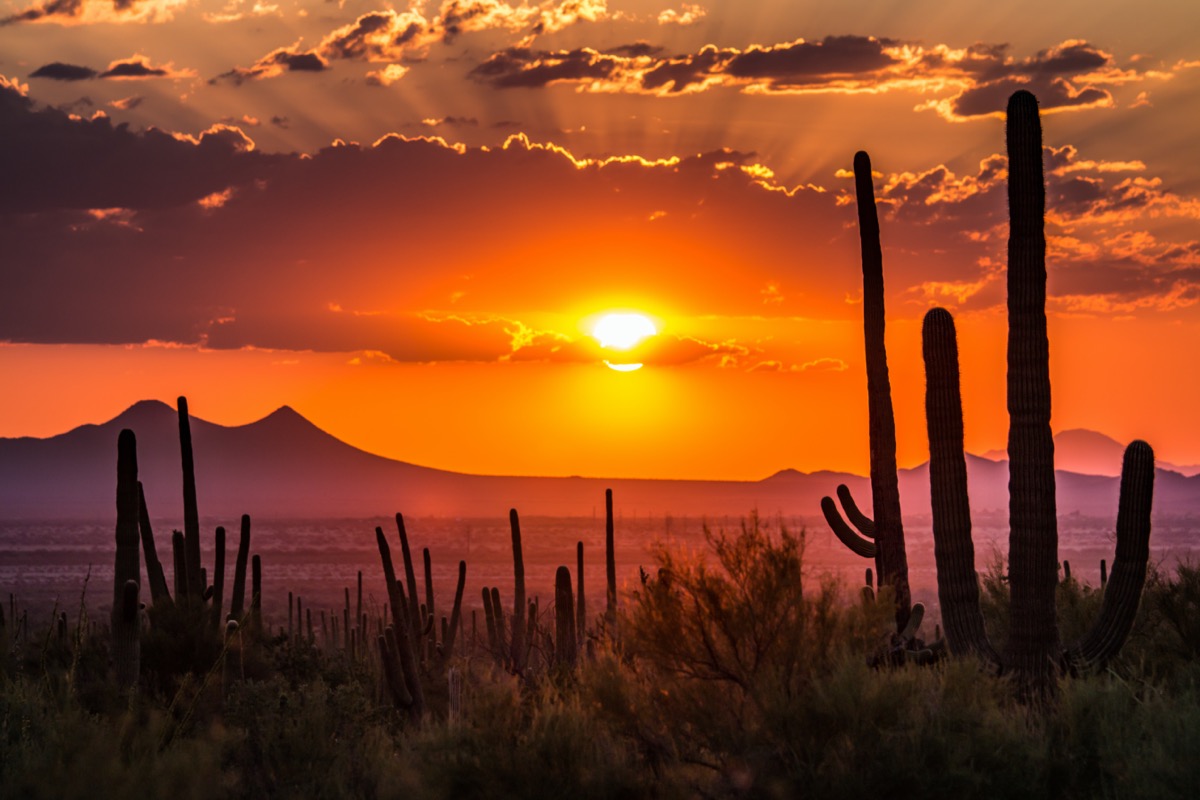 "The state's surge in additional cases continued to set daily records for hospitalizations, ventilator use and use of intensive care beds for coronavirus patients," reports AP. "Health officials have attributed the new cases to increased testing and to community spread of the coronavirus. Saying that data trends were headed in the wrong direction, Gov. Doug Ducey on Wednesday reversed himself and allowed local governments to impose requirements for people to wear masks in public to curtail spread of the virus." So far the state has 52,390 cases and 1,339 deaths.

"In California, the number of people hospitalized with coronavirus is the highest it's been since the beginning of the pandemic. Across the state, 3,574 people were hospitalized Saturday. The state also reported the most new cases in a single day—4,515—since the pandemic's start, according to data from the state's health department," reports CNN. "California Gov. Gavin Newsom announced last week residents were required to wear a face covering in 'high risk' settings, including indoor public space, public transportation or while seeking medical care." The state has 169,000 confirmed cases and 5,424 deaths.

"On Saturday, Gov. Jared Polis extended the state of disaster emergency for an extra month, saying 'the three-day moving average for cases is now going up in our state,'" reports Fox 13. "We don't know what's gonna happen in the future, and I think that's creating a little stress in people," Director of Critical Care at UCHealth University of Colorado Hospital Dr. Marc Moss told the TV station. The state has 30,349 cases and 1,647 deaths.

"Delaware Public Health officials are encouraging teenagers who participated in 'senior week' activities at the beach to get tested for COVID-19," reports WPVI.  "The concerns come after a group of kids living in a rental unit in Dewey Beach tested positive for the virus." The state has 10,681 cases and 434 deaths.

"Gov. Ron DeSantis acknowledged on Saturday that the rising number of new COVID-19 cases in Florida cannot be explained away by an increase in testing, and announced plans to step up enforcement of social distancing practices in bars and nightclubs," reports CNN. "Even with the testing increasing or being flat, the number of people testing positive is accelerating faster than that," DeSantis said. "You know that's evidence that there's transmission within those communities."

"Georgia saw its greatest increase in cases based on numbers provided by the Georgia Department of Public Health on Saturday," reports 11 Alive. "The daily numbers update showed an increase from 62,009 cases to 63,809—or roughly 1,800 cases in a single day. It's important to note that testing also went up significantly on Saturday…more than double Georgia's daily average this month. But it's not just more testing. Georgia's rate of positive tests is also heading back up." The state has 63,809 cases and 2,642 deaths.

"The state health director said Friday that an increase of 27 new COVID-19 cases on Friday is worrisome, but are manageable and won't slow reopening plans," reports Hawaii News Now.

"The decision to pause or postpone the opening plan will depend largely on whether we can effectively manage the cases that we're seeing. Right now, we're seeing what we expected to see," Bruce Anderson, director of the state Health Department, said, adding that the hospitals could handle those sick. The state has 803 cases and 17 deaths.

"With the sharp increase in coronavirus infections Idaho's seen in the past two weeks, Gov. Brad Little says 'we're looking at all the options,' including a possible partial rollback of the state's staged reopening plan," reports the Idaho State Journal. The state has 4,006 cases and 89 deaths.

"We've been in this fight for more than three months now and, unfortunately, we still have a long way to go," Gov. Andy Beshear said in a statement. "But I have total confidence that Kentuckians will rise to the challenge in order to do one of the things we do best: watch out for families, friends and neighbors." The state has 13,630 cases and 524 deaths.

"For the fourth consecutive day, Michigan health officials have announced more than 200 new coronavirus cases," reports MLive. "More than 1 million people in Michigan have been tested for COVID-19. A national website tracking the pandemic lists Michigan as one of only three states 'on track' to contain coronavirus." The state has 67,545 cases and 6,087 deaths.

"Missouri officials reported the state's highest single-day increase of COVID-19 cases since the beginning of the outbreak for the second day in a row on Sunday as the novel virus continues to spread in new Missouri counties," reports KMOV. "The state has had 17,590 cases and 955 deaths."

The state has 13,205 cases and 487 deaths. "Many of the new cases are the result of people thinking it is safe to have social gatherings, or relax social distancing precautions," says the Nevada County Public Health Department.

"While cases of COVID-19 have plateaued in Ohio from this spring's peak caseload, this weekend's numbers indicate the virus continues to spread," reports the Columbus Dispatch. "That was also made evident last week with a huge spike in new cases."  The state has 44,262 cases and 2,697 deaths.

With health experts warning that the Trump rally in Tulsa could have been a "super spreader" event, "coronavirus continues to spread at a rapid pace in the Sooner State as Oklahoma State Department of Health officials say the number of positive cases is now over 10,000," reports KFOR. The state has 10,037 cases and 368 deaths.

"The organizer behind several protests at South Carolina's State House is urging people who have participated to get tested for COVID-19," reports the State. "Several protesters at the marches in downtown Columbia — in addition to similar events in Charleston and Greenville — have tested positive for the coronavirus, according to organizer Lawrence Nathaniel." The state has had 23,786 cases and 644 deaths.

"The number of COVID-19 hospitalizations in Texas continued to reach record highs over the weekend while new cases also climbed in the Houston area," reports the Houston Chronicle. "The new figures come as County Judge Lina Hidalgo and leaders in other urbanized counties have issued orders mandating that businesses require customers wear face masks." The state has had 108,000 cases and 2,165 deaths.

"Three more die and nearly 400 new diagnoses are reported as part of 'dramatic' rise in cases," reports the Salt Lake Tribune. The state has had 17,068 cases and 155 deaths.

"Hospitals in Yakima County — which has the highest rate of COVID-19 infection in Washington state—are beyond capacity with sick patients," reports Q13. The state has 28,225 cases and 1,265 deaths.

The state has had 2,533 cases and 89 deaths. "Health officials in Preston County, W.Va. are reporting more cases of COVID-19 that they say are associated with recent travel to Myrtle Beach," reports WSAZ. "On Sunday, the Preston County Health Department said the total has risen to 26 since the first cases were reported Wednesday."

"The latest state of Wyoming COVID-19 dashboard classifies a spike in cases of the virus as 'concerning,'" reports KGAB. "That rating is being prompted by the fact that Wyoming has seen a spike of 124 new cases in just the last week, a rate that is more than double that of the first week in June. Of particular concern is a spike of 87 new cases in Uinta County." The state has 1,197 cases and 20 deaths.

As for yourself: To get through this pandemic at your healthiest, don't miss these Things You Should Never Do During the Coronavirus Pandemic.