You won't believe some of these!

When you're a server or bartender wanting to rake in some tips, it's in your best interest for customers to drink more, eat more, and genuinely enjoy the time they spent at your table. All of these things lead to a bigger tip in your pocket—and smart servers have learned how to play a game so subtle, most diners don't realize it's happening.

Through understated waiter tricks that play on our psychology, restaurant servers encourage us to buy more expensive drinks and dishes or be a little more generous with the tip than we normally would.

It might help you recognize when you're being played, or just make you feel a little less special when your server hands you an extra after-dinner mint.

Here are 17 things to notice about your waiter the next time you dine out. And for more, don't miss these 15 Classic American Desserts That Deserve a Comeback.

They'll stare you down

Waitress Kirsten Bailey, who spoke to Eat This, Not That!, has a special (and maybe kind of creepy) trick for getting customers to buy expensive drinks.

"If someone orders a Long Island Iced Tea, I ask 'Do you want top shelf or……' and stare at them without blinking," she says. She estimates nine out of 10 customers will order top-shelf liquor if she stares long enough.

"No matter how busy I was, I always tried to make myself seem not busy," says Quora user Zoie Shook, who once worked at Olive Garden. She always wanted her tables to feel like they had her full attention. "Whether that's by bringing them another glass of water or pop before they're done with their current one, or taking the time to talk to them a little bit, the tables that I took my time on, always appreciated it and showed it generously in their tips."

They'll give out freebies

Every server knows that an upset customer means bad news for their tips. But there's an easy way to get around most complaints: free food. Quora user Gabriela Martinez, who works at a Mexican restaurant, says, "There were a few foods that cost the restaurant next to nothing to make, like our sopapillas. Throwing these in to make an upset customer feel special was something we did to give the impression that we were giving more than we actually were." It's one of the easiest waiter tricks in the book.

And for more things to look out for, be aware of these 20 Sneaky Ways Restaurants Get You to Eat More Food and Spend More Money.

Next time you're out to eat, pay attention to how your server speaks. Instead of telling a customer how much extra money something would cost, Martinez would "simply ask, 'Would you like to add cheese?' for example, or sour cream. That implies it's an add-on without making people think about price. Only if someone hesitated would I throw in 'its only 50 cents more.'"

They'll put higher-price items on the tray, and display

Here's a sneaky one: "Make up an expensive, brightly colored cocktail and just put it on a tray and walk around the restaurant a few times," says Quora user Alison Bourke, who worked at Sheraton hotels. "People can be very 'see one, want one' with things like that." Out of all the waiter tricks, one of her managers swore by this trick and said it was highly successful.

"As a server, anything I can do to make the customer interact with me as a person increases my tip," says Quora user Adrienne Flowers. However, that doesn't mean being obnoxiously fake. "It's as simple as wearing glitter eyeshadow so they look me in the eye, or dropping my pen as I take their order, or bringing two drinks because I claim I forgot which they ordered, or 'accidentally' saying something funny."

"If someone asks for coffee, make sure to say you're going to put a fresh pot on, so it will take a minute," Quora user Carl Johnson says. The truth is that most of the time coffee is already brewing, but the little white lie gives you time. However, be sure to watch out for these 21 Ways You're Annoying Your Waiter and Don't Know It.

They'll give you an encouraging nod

Quora user Jackie Thornton remembers being taught to do the "encouraging nod" when she was suggesting expensive food or upgrades. "If the customer orders a vodka and cranberry, you would say 'Grey Goose vodka and cranberry?' while slightly nodding your head and smiling," she says. Usually, the customer would say yes or at least choose another top-shelf liquor. "Then after the main course, you would say 'Wouldn't some heavenly Crème brûlée top that meal off perfectly?' Again, nodding slightly and smiling."

RELATED: The easy guide to cutting back on sugar is finally here.

Here's one you'll probably recognize: "People LOVE when you go the extra step to accommodate them, for instance asking if they're celebrating something, or have plans afterward, asking if they've been to the restaurant before, asking if they have any questions about the menu," says Reddit user Samanthugalicious. They swear going out of their way to make sure the customer has a good time leads to high tips.

They could play the "new guy" card for a long time

Out of the many waiter tricks, a quick one for better tips is to pretend you don't know what you're doing. "You get bigger tips if you tell them, 'I'm new, so you might have to bear with me,' one Reddit user said. "The manager who trained me told us this and even encouraged us to keep doing it for as long as we wanted. She had one girl who did it for two years. This way you look like a badass because you set the expectation that you might suck. So they think you're a rockstar even if you're mediocre." Sneaky.

They'll know the menu—or fake it

Yes, they even suggest you fake it until you make it. "Knowing your wines is a big leg-up, but most of your customers won't know the first thing. So until you get your wine knowledge up, just learn some basic buzzwords (light, dry, sweet, full-bodied) and people will believe you." Of course, people who know their wines will see right through that charade.

They'll get your drink order ASAP

Good waiters drop everything and get the drink order, no matter how busy they are. "When you get a table and you're busy, drop everyone else and take their drink order," says Reddit user Jericho. "Waiting 20 minutes to order with a beverage is a lot more tolerable than waiting 5 minutes to even be noticed." 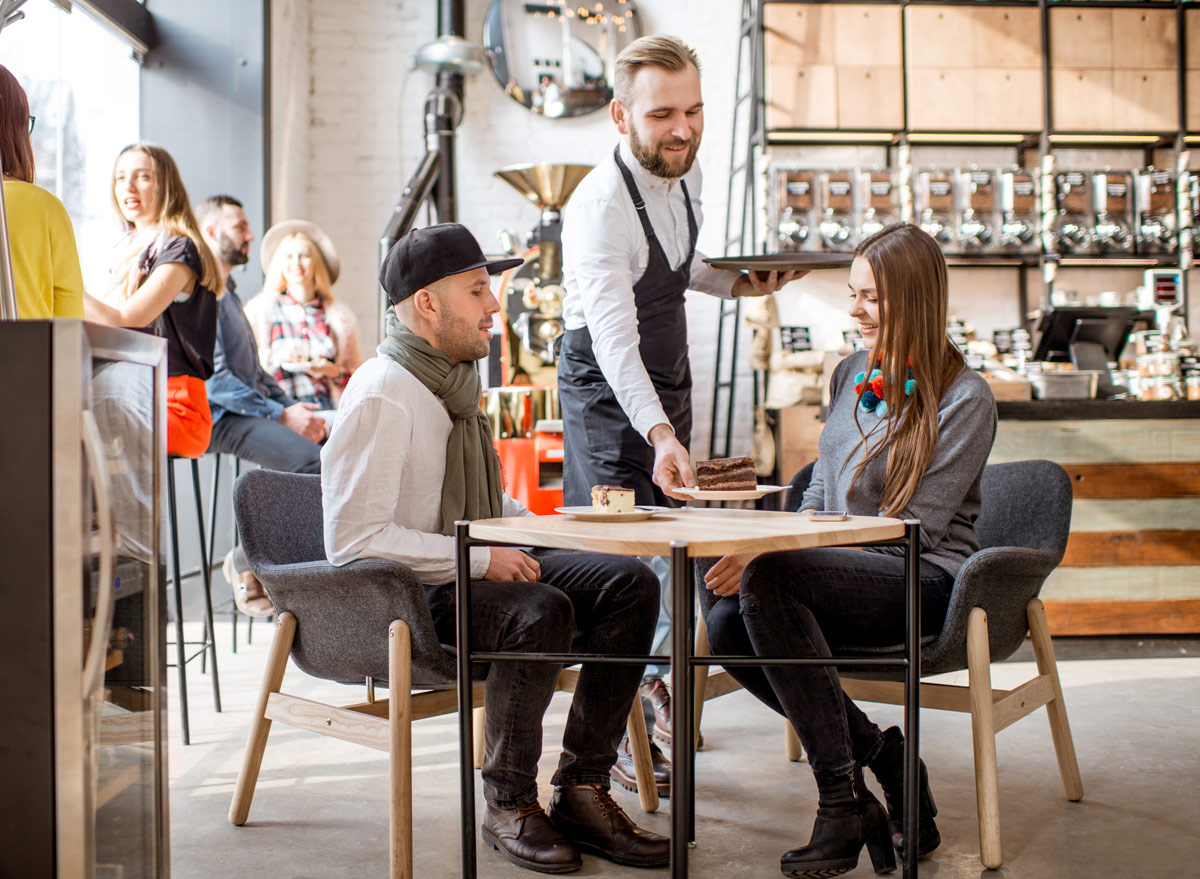 You know that desperate feeling to look good in front of your friends? Some servers take advantage of that. "If people split the check, use only one check presenter when you return with the credit card slips," Reddit user OrangeAppeal suggests. "Some people will tip more not to seem cheap to their friends."

Waiters won't glam up too much

"Don't wear expensive jewelry or watches," a Reddit user said about waiters and the dress code. "I knew a guy who wore a real Rolex that he got as a graduation gift. Bad move." Another Reddit user claimed that an informal study of pizza delivery tips compared to the niceness of the delivery car showed that driving a beat-up car almost always resulted in significantly higher tips.

If a waiter has ever made you feel extra special, don't let your head get too big. They probably do that for all of their tables. It's one of the easiest waiter tricks to do with after-dinner mints. "At the end of the night, if you leave mints on the table, give them the normal amount of mints, walk away for a second (or look like you're thinking) and then give them a few more mints," says Reddit user ADillPickle. "They'll think you're doing them a favor by treating them extra special."

And for more ways to save while you're dining out, here are 18 Ways to Lower Your Restaurant Bill, Straight From Employees.

"A friend of mine in [high school] would take a piece of cake and slice it into about 5 pieces at the beginning of his shift. Then throughout the night he'd give the five slices of cake out to different tables and say, 'This is part of a full dessert, and you guys are such a great table I figured I wouldn't let it go to waste. Enjoy.' He swore his tips were always great from those tables," says Reddit user Evolatic. Chances are, the cake was just one of the many waiter tricks to make customers feel special and loosen their wallets.

Most of the time, diners are way too full to even consider dessert when a server offers the menu. But smart servers who are well-versed in waiter tricks will have planted the idea of dessert at the beginning of the night. "When you're first talking to a party, you say something like, 'We make our cheesecake in house, they're fresh and delicious, we can talk about what flavors we have after you have finished your entrée,'" says Quora user Steve Blanchard. This is a strategy used in sales. "It gives the customers time to think about dessert during the whole meal. At the end of their meal they are not 'surprised' when the dessert menu shows up."