Here's how the fitness icon has helped thousands of people slim down, gain energy, and find lifelong happiness.

Although the Richard Simmons has retreated from the spotlight — turns out he's not missing, just taking a break from the public eye — his energy and compassion has helped people lose millions of pounds over the last more than 30 years.

With diet books, exercise videos (who can forget the Sweatin to the Oldies series?), and countless TV and print interviews, Simmons has shared his wisdom to help people lose weight and keep it off for good. And as someone who himself lost more than 100 pounds when he was in his late teens, Simmons doesn't just spew wisdom — he practices what he preaches. Here is some of the fitness icon's advice to help people shed those unwanted pounds, adopt a healthier lifestyle, and keep it off forever. Looking for more weight-loss tips? Check out our 55 Best-Ever Ways to Boost Your Metabolism.

One of the secrets to Simmons' success is he doesn't do the same workout two days in a row. In fact, mixing up your workouts is one of our Ways to Make Your Workout 500% More Effective.

"One day I'll tone—chest, back, and shoulders—and the next day it's biceps and triceps. I also do 45 minutes of cardio every day. I do that before I even leave the house," he told Men's Health.

Work Out First Thing in the Morning

Although Simmons taught classes at this Slimmons fitness studio in Beverly Hills at all hours of the day, he prefers to get his personal workout in first thing in the morning.
"For my workout, I'm up at 4 a.m. I say my prayers, count my blessings, and I work out right away," Simmons told Men's Health. "I just get it done…I work out when my housekeepers and my 16-year-old dog, Hattie—she's a Dalmatian—are asleep. I just get it done. And then I really feel the power. Because if I get it out of the way first thing, I don't make any whining, pity party excuses. If I don't take care of myself, if I don't feel good about myself, how can I help others?" 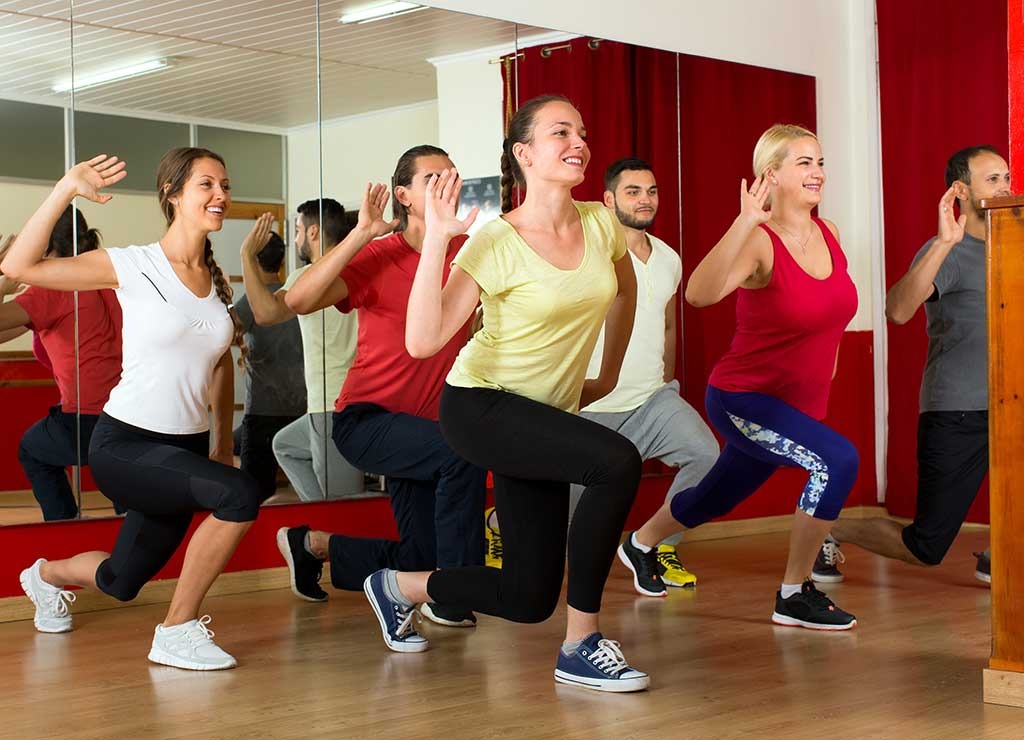 Simmons is known for his eclectic music choices, as evidenced by his workout videos (he's a big fan of the oldies per his Sweatin' to the Oldies tapes). He says mixing up the music and incorporating a lot of different kinds of fun music is the key to getting into the mood to workout and burn serious calories.

""I'll have a workout mix that has the Hustle, the Congo, the Charleston, the Twist, the Can-Can, the Mexican Hat Dance, the Mash Potato, the Cha-Cha and the Macarena," he told Men's Health in an interview. "You put all those songs together and speed them up a little and you've got people just sweatin' and sweatin' and feeling good and singing along. If I've got the right songs, I can weave a spell over everyone." 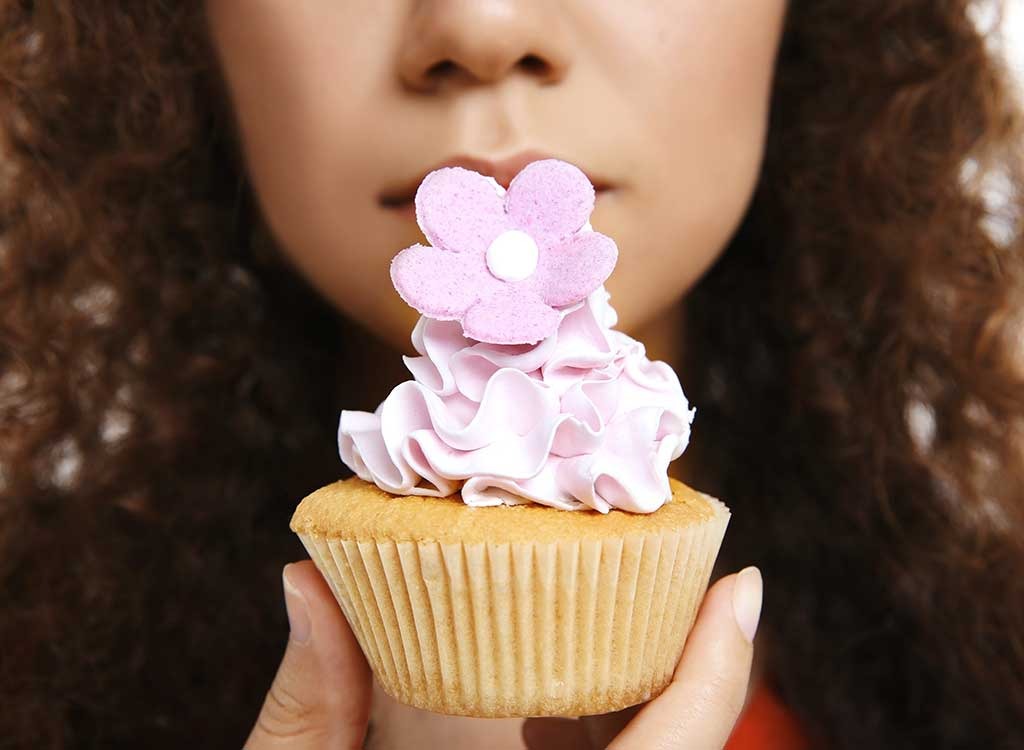 Simmons says bribery to lose weight didn't work for him as a kid, and it's not effective as an adult, either. Some people convince themselves if they lose X amount of pounds, then they'll buy themselves a new car or spoil themselves with a fancy vacation. Simmons says those aren't motivators that will work.

"My father offered me a dollar for every pound I would lose as a kid. It didn't work. And it doesn't really work in the long run," Simmons said to Men's Health. Who are you competing against? It's you. You need to be doing this for you and only you. Not to win a car, not to stay at a fancy resort, not to get a treadmill or an elliptical for your home. The real pride, the real present, is your health and your longevity."

Pick a Daily Calorie Goal and Stick to it

Simmons goes back to basics when it comes to weight loss; he always preaches that people need to be mindful of how many calories they are consuming, and stick within an appropriate range for their personal weight-loss goals.

Leave Temptation Foods Out of the House

Out of sight, out of mind — and out of your mouth. At least, that's Simmons' mantra for trigger foods that might cause him to binge and end up in an unhealthy downward spiral.

Don't Let Past Mistakes Weigh You Down 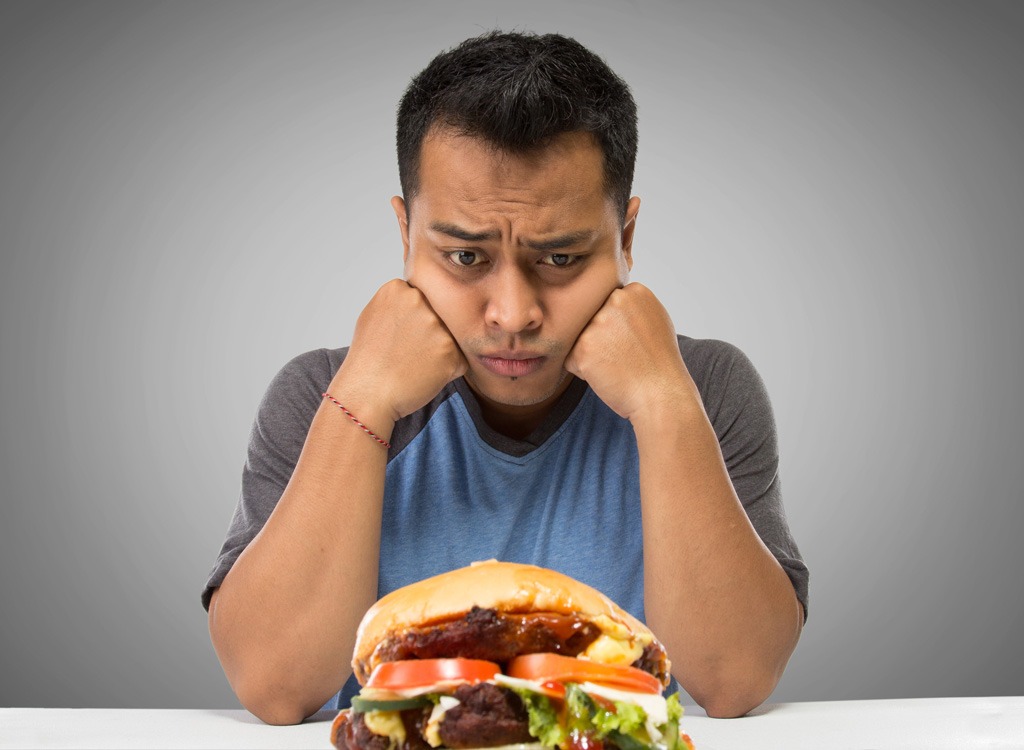 Simmons says as you're embarking on your weight-loss journey, it's important to stay in the moment.

"I'm not one who truly lives in the past. I have baggage, just like everyone has their baggage," he told Men's Health. "But I really—how do I say it?—I really attack the present. I plan for the future, but the only day I really worry about is the day I'm living right now." 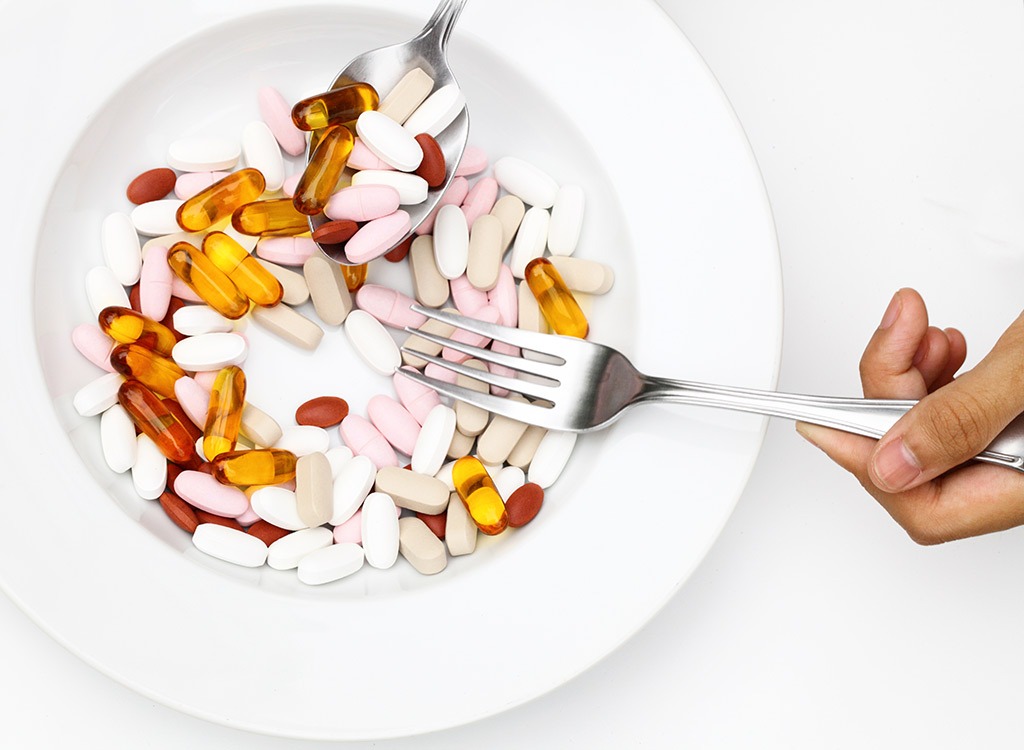 The fitness guru himself struggled with eating disorders and using unhealthy measures to lose weight in his late teens, including taking laxatives and diet pills. He insists that the real way to drop pounds is the old-fashioned way: Moving your body and eating right.

"There was always some new powder or diet plan that somebody wanted to put my name on. Anything that had to do with quick weight loss. 'It's a special powder that you sprinkle in your water and drink six times a day and then the weight just falls off.' I just don't believe in that stuff," he revealed to told Men's Health. "There is no magic milkshake or workout machine. I think the real machine is your body. I do love treadmills, ellipticals, stationary bikes, free weights. But like I say to my students, "If you want to get the body you've always dreamed of, you have to earn it."

Measuring out your food and sticking to reasonable portion sizes is one of Simmons' three major tenets to losing weight. "My formula has always been: Love yourself, move your body, watch your portions. And it sounds so easy, but it is not," he said to Men's Health.

Looking to cut back on your serving sizes? Check out our 18 Easy Ways to Control Your Portion Sizes.

Just like Eat This, Not That!, Richard Simmons doesn't believe in dieting. Rather, he knows losing weight is a combination of lifestyle choices. He released a weight-loss book in 1980 titled Never-Say-Diet Book, and echoed that sentiment during a 1981 interview with People magazine. "Look at it. The first syllable is die. Now, is that any way to inspire anyone?" he said.

It's Important to Keep a Good Attitude

Simmons has always called himself a court jester and makes good on that nickname through his flamboyant outfits and goofy interviews. But he says keeping a good attitude is important when you're losing weight, too.

"You have to have a sense of humor when you lose weight. You take it too serious, and it doesn't work out." Simmons told Dr. Oz during a taping of The Dr. Oz Show in 2010.

Do it the Old Fashioned Way

There are so many weight-loss options nowadays, what with diet pills and liposuction and lap band surgery. But Simmons insists you don't need any of those shortcuts; the only way to truly lose the weight and keep it off forever is from good old-fashioned eating right and exercising, he told Dr. Oz in 2010.

Simmons is known for his explosive energy and positive mantras as much as he is those little striped shorts and tank tops. He told Dr. Oz that the first step in beginning a weight loss journey is loving yourself first.

"Step 1: You must know your self-worth," he said on The Dr. Oz Show in 2010. "You're worth more than all the rainbows in the skies and all the pearls in the ocean."

Simmons says a key that has helped him maintain his 40-year weight loss has been keeping focusing on all the positive things in his life.

"Every day I wake up with this saying: 'Thank you god for this beautiful day, and I'll be kind to people in every way. And thank you for giving me another chance to serve you on this Earth and to the best I can.' he said on The Dr. Oz Show in 2010. "And when you wake up with that in the morning in your heart, and you truly believe in yourself, then you look at food differently and you look at exercise differently." 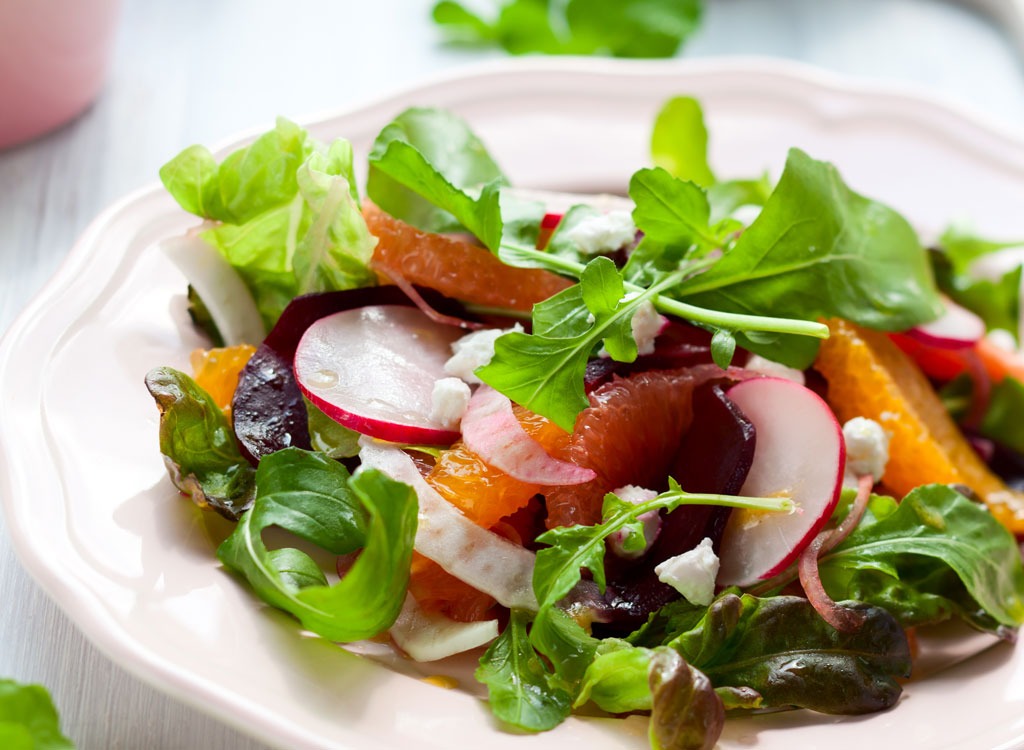 When Simmons visited The Wendy Williams Show in 2011, he shared some of his weight-loss wisdom but kept it simple: He says he maintains his energy by eating three balanced meals a day and drinking plenty of water. For most adults, that's around 64 ounces; drinking much more than that is one of the 16 Ways You're Drinking Water Wrong.

Write Down What You Eat

Richard Simmons was a guest on The Ellen Degeneres Show in 2010 and met a show producer named David Garcia who was 400 pounds. Simmons was compelled to help Garcia, so he personally coached Garcia and invited him to his fitness studio Slimmons. As part of his weight loss journey, Garcia had to keep a food journal and write down everything he ate and give it to Simmons. This helped Garcia lose 159 pounds in a year. Not sure where to start? Check out our 10 Tips for Keeping a Food Journal for Weight Loss.

Weigh Yourself Once a Week

Simmons believes in weighing yourself to track progress but warns people not to be obsessive about it like he was in his late teens. "Some people can't weigh themselves every day because they're too obsessive," he said during an interview on the ShayLoss YouTube show. "It shouldn't be every month. You should get on [the scale] at least once a week so that you can see, 'am I really watching my portions?'" He also recommends keeping a log of your weight so you can track your progress weeks and months later.

Get Rid of Negative People

Removing all the toxic people in your life who are hindering your weight loss efforts need to go, Simmons says.

"Anyone who puts you down, makes fun of your weight loss… you don't need anyone in your life who is not supportive," he said on ShayLoss. 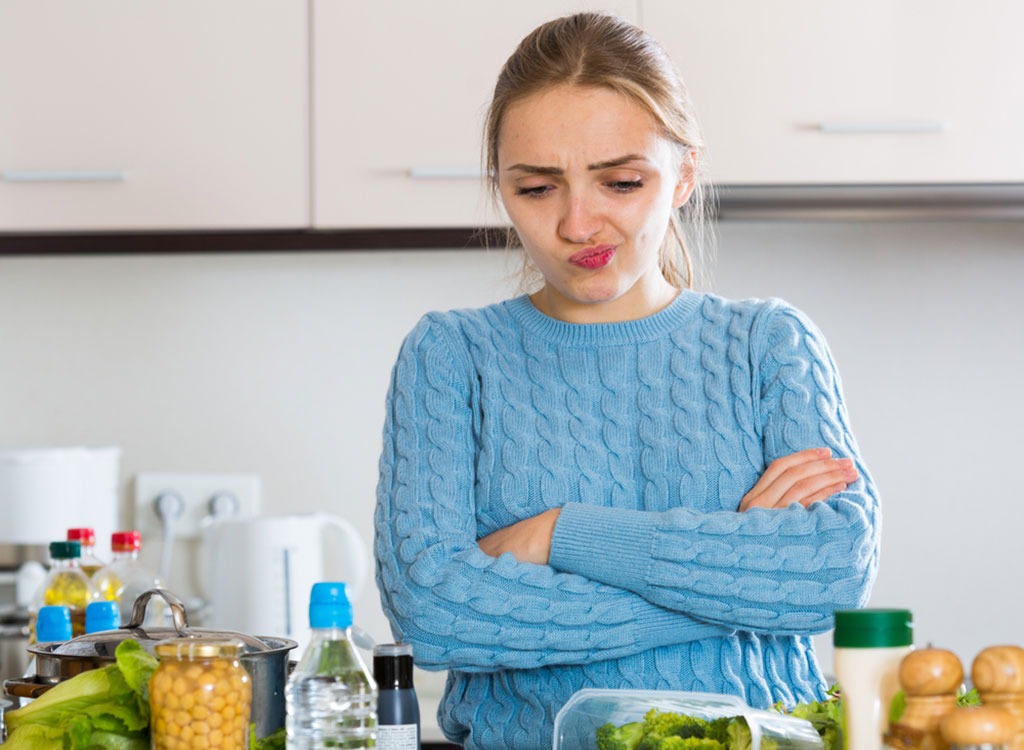 Weight loss doesn't happen overnight, as Simmons reiterated during his ShayLoss interview. He reminded people that it's important to keep your eyes on your goals and not get sidetracked by small setbacks along your weight-loss journey.

You're Never Too Old to Get Moving

Simmons shared a fun video to his Facebook page on March 3 that showed an elderly woman dancing happily on her 100th birthday. "No matter how old you are, ALWAYS keep moving!" he wrote. It's an important lesson — the older you get, the more your body will appreciate you keeping it moving! Being more active is one of our 40 Weight Loss Tips for Over 40.