What You Should Know About Raising Canes Chicken

Raising Cane's may be new compared to old-time rivals like KFC and Chick-Fil-A, but don't underestimate them. It's clear this fast food chain is no spring chicken.

Fast food chicken is on the rise. Chick-fil-A and Wingstop were both among the top five fastest growing chains in the country in 2016, according to the annual list released by Nation's Restaurant News. But they weren't the only chicken chain on the list, nor were they the highest ranked. In fact, the top spot was nabbed by Raising Cane's Chicken Tenders with a 25.9 percent growth in sales over the course of a year.

We know what you're thinking because we had the same question — "Raising who?" With only 310 locations in the country, odds are good that you may not have heard about Raising Cane's until recently, either.

They originated in Louisiana in 1996 and have been expanding ever since, opening 59 new locations in the last year alone. If you haven't seen one in person yet, you will soon, but until then, we've got everything you need to know about this up-and-comer.

We've also got your back when it comes to satisfying your chicken craving in the meantime. Until Raising Cane's makes their way to wherever it is that you call home, there are other places to get your fix. But before you go ordering any old thing off the menu, make sure you check out Chick-Fil-A menu—ranked!

Your Choice Of Chicken 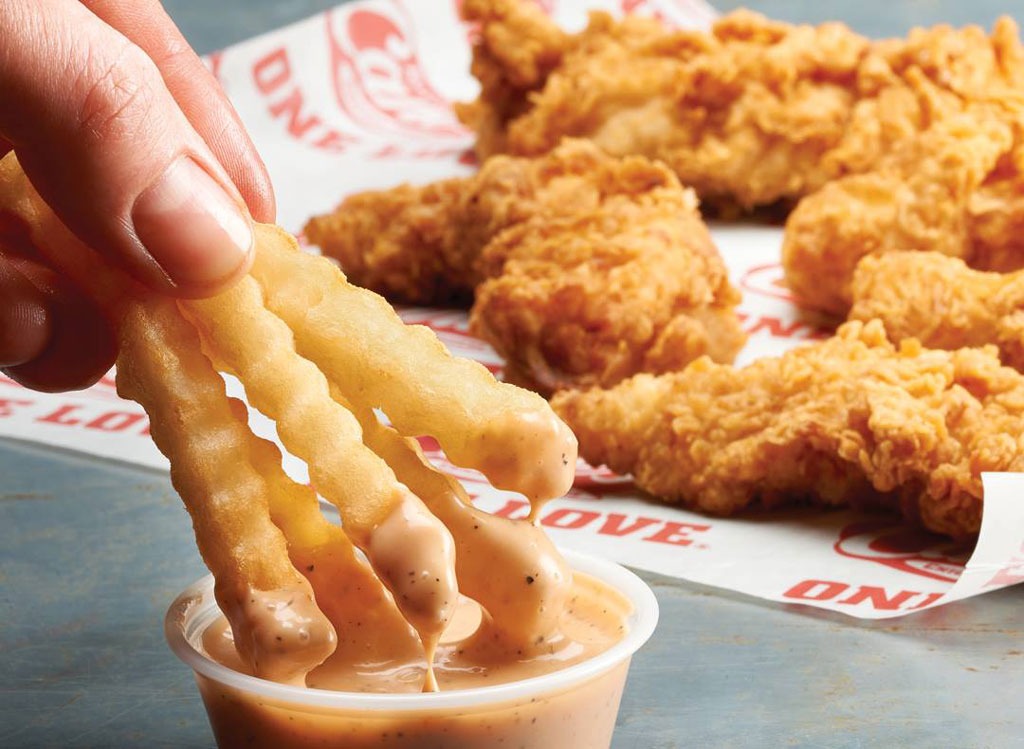 …and nothing else. That's right, Raising Cane's has an extremely minimalist menu and the only decision you'll have to make there is how many chicken tenders you want and whether you'd like those on a sandwich or in a basket. The easy ordering experience is similar to what you'd find at In N Out and the similarities don't stop there.

Just like the popular burger chain, Raising Cane's also uses fresh ingredients and a secret sauce. The chicken is fried fresh and made to order, lacking the greasy texture you might find at other places. Rumor has it that the dipping sauce is made up of mayonnaise, ketchup, Worcestershire sauce, black pepper, and garlic pepper, but if you find yourself in a Raising Cane's anytime soon, don't even bother asking them to verify. According to their website, only general managers are privy to this information and they're not sharing. 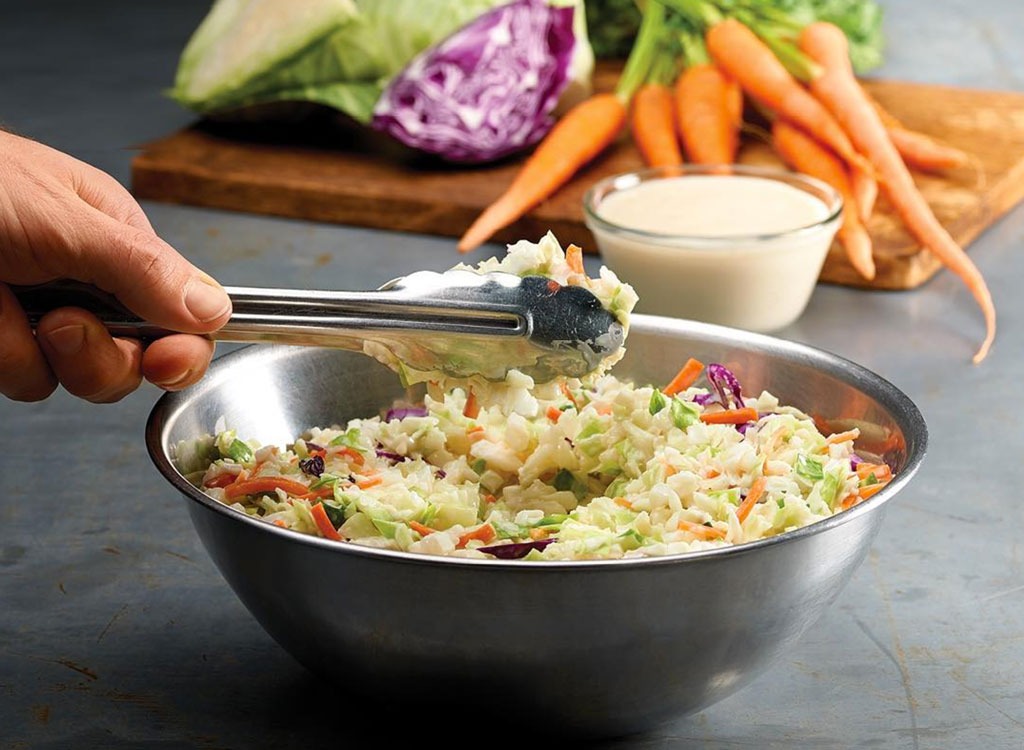 Raising Cane's chicken isn't the only thing served fresh. This Insta picture doesn't lie — the chain really does make fresh coleslaw every single day, which keeps it from getting soggy. It's the only thing you'll need a fork for since the rest of the sides piled into your chicken basket will be finger foods like crinkle cut French fries and Texas toast.

It's the latter that Raising Cane's is famous for; made with sesame-seeded pull-apart bread, the Texas toast is slathered in garlic and butter. And we weren't kidding when we said the place only uses fresh ingredients. Not only does their toast follow that standard, but so do their signature soft drinks — freshly brewed ice tea and homemade lemonade. 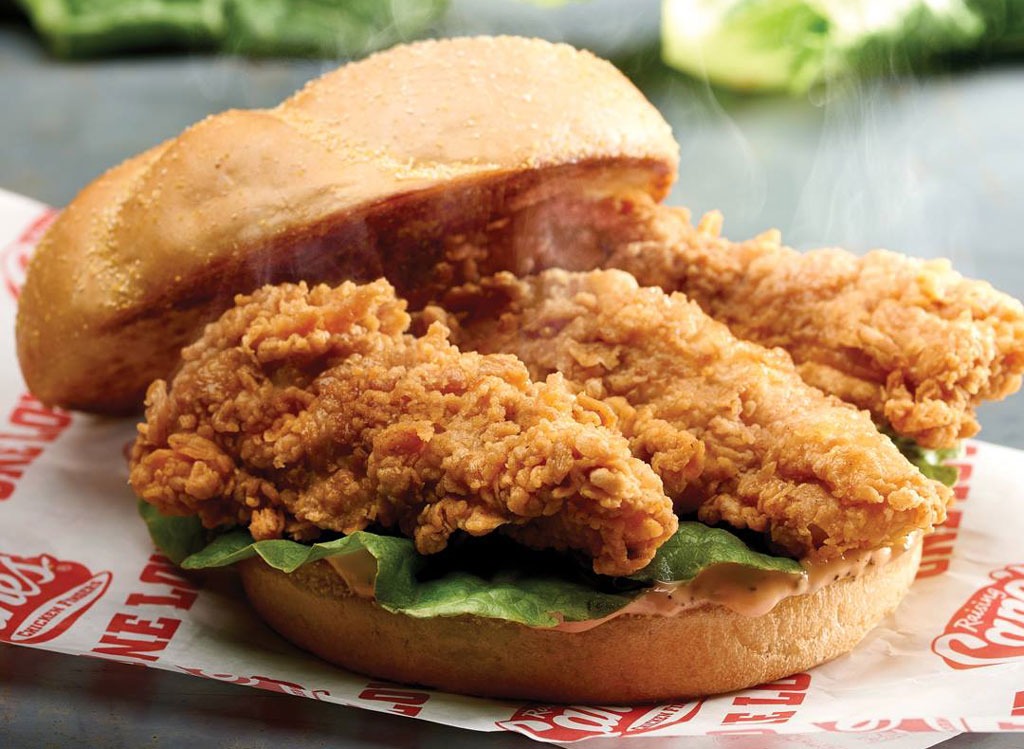 Although they don't have any healthier grilled options, their menu items are good for what they are — fried chicken and French fries. So as long as you make this meal a treat and not a diet staple, you're good to go.

One 120-calorie chicken finger, for example, has less calories, fat, and sodium than the same thing from KFC, as well as three more grams of protein. Just keep in mind that those innocent numbers can quickly rise depending on what size basket you're ordering.

In terms of fries, a Raising Cane's order is also better for you than the same thing at Chick-Fil-A, which has more calories, fat, and sodium. Don't let that stop you from hitting up the classics, though. There are more healthy lunch ideas at KFC and Chick-Fil-A to consider while you wait for Raising Cane's to come your way.