8 Most Nostalgic Moments In McDonald's History

Here's how the Golden Arches became the ubiquitous backdrop to our childhood memories.

Of all the fast-food chains, McDonald's has been the closest to our collective American hearts. In fact, the fast-food giant has been so effective at branding since its decision to franchise in the mid-1950s that in 1973, 96% of American kids were more familiar with Ronald McDonald's name than the name of the president.

With the invention of the Happy Meal, the chain swiftly made its way into the family unit. By the 1990s, McDonald's saw its biggest growth spurt—it was said that, on average, a new McDonald's restaurant opened somewhere in the world every five hours.

With a business finesse unparalleled by any other fast-food corporation, the Golden Arches became the ubiquitous backdrop of our childhood memories. From the launch of the Halloween bucket to the popularity of its ball pit, McDonald's has successfully inserted itself into our nostalgia.

If you're ready for a trip down memory lane, check out these classic artifacts from Mickey D's long and storied history.

For more, check out 8 Worst Fast-Food Burgers to Stay Away From Right Now.

One of the most iconic Happy Meals of the 1980s was the Halloween pail. The brand successfully sold these plastic buckets named McPunk'n, McBoo, and McGoblin, which kids could use to store their candy when trick-or-treating. Afterward, these buckets were often used to store random objects around the house for years to come.

Hot Wheels were one of the hottest toy releases in the history of Mcdonald's. In fact, the Hot Wheels Happy Meal toys were so popular in the '80s, McDonald's purchased just over 33% of Mattel's worldwide production.

The collectable cups and mugs

If there is one thing that Micky D's did right, it was making everything "collectible." No matter the generation, most of us remember drinking a cold glass of milk or juice from one of these many collectible glassware pieces. Whether you had ones with the traditional McDonald's mascots, the Disney collaboration pieces, or the Batman Forever embossed mugs—these vessels were in every American cupboard.

Now selling at $80 for the complete collection on eBay, these Disney Hercules plates were a favorite dishware set for many fans. Thanks to a 10-year collaboration with Disney, McDonald's merch became highly sought after and highly collectible.

The PlayPlace would never be the same after numerous McDonald's locations got rid of their ball pits—although it was probably for the best. Ball pits are Petri dishes of germs, according to researchers who found that they contained more than 31 different types of bacteria. Still, the generation of kids who were brought up with the Mickey D's ball pit will forever cherish those memories.

The Beanie Baby craze took over the nation like mass hysteria and there could be no better business decision than to jump on the bandwagon during McDonald's peak growth in the '90s. In fact, the fervor for these plush babies was so high in 1998 that Teenie Beanies collecting resulted in fights at various McDonald's locations, calls to the police, criminal charges, and injuries.

Originally, the McDonald's menu was very simple and very cheap. While the fast-food restaurant is still known for having affordable food, the original price for its hamburger was just $15 cents! Read more about McDonald's vintage menus here. 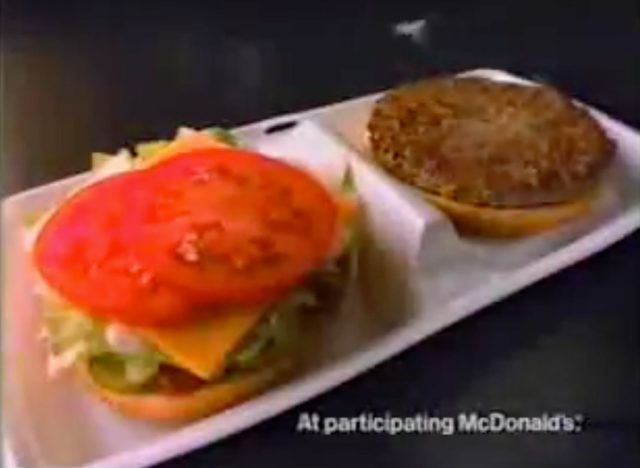 "The hot stays hot, and cool stays cool," was the slogan for McDLT. For the uninitiated by the popular commercial, it starred Jason Alexander from the TV show Seinfeld and included one very catchy jingle.

In 1985, the McDLT was rolled out for those who wanted a burger with fresh, crispy lettuce and tomatoes—as was the case with Burger King's Whopper. Prior to that, McDonald's had not added fresh vegetables to their hamburgers. That is, until the McDLT, which came with two compartments that separated the hot meat patty from the cool vegetables.

Eventually, the item was discontinued due to the large amount of Styrofoam it required for the packaging, which was cited as being wasteful and environmentally unfriendly during a time when recycling was becoming popular.

Amber Lake
Amber Lake is a staff writer at Eat This, Not That! and has a degree in journalism from UNF in Jacksonville, Florida. Read more about Amber
Filed Under
McDonald's // Menus // Restaurant Chains // Restaurants