This Is Meghan Markle's Exact Breakfast, Lunch, and Dinner

Balance is key for the Duchess of Sussex.

Meghan Markle may be best known as the actress-turned-Duchess, but well before she gained her royal status, she has proudly worn another title: Foodie.

The former Suits star has openly shared her love of food, cooking, and wellness. From 2014 to 2017, she ran her own widely-followed lifestyle blog The Tig—a nickname for her favorite red wine, Tignanello. The blog, which was described as a "hub for the discerning palate—those with a hunger for food, travel, fashion & beauty," featured posts on topics ranging from Meghan's favorite recipes and interviews with chefs to stories about meditation and body positivity.

While rumors have been swirling about the Duchess of Sussex reviving her now-defunct blog after her lawyers trademarked the website's name in July, nothing has been confirmed yet. Regardless, it's fair to say that healthy eating is still top of mind for the self-proclaimed foodie, who also holds the second-most-Googled diet out of all the royal family members, according to exercise and nutrition experts at Barbend. Read on to discover what a typical day of meals might look like for Meghan Markle. And next, don't miss 16 Celebs Share How They Make Their Oatmeal.

During her acting career, Meghan shared that she would kickstart her day with hot lemon water—a popular drink that's been said to promote healthy skin due to the vitamin C found in lemons. While the best temperature to drink lemon water has been a topic of debate, it's been found that drinking warm lemon water can aid in digestion, according to previous Eat This, Not That! reporting.

Like her sister-in-law Kate Middleton, the former actress has been known to opt for oats in the morning. Her go-to breakfast bowl has been reported to be fiber-packed, consisting of steel-cut oats mixed with almond or soy milk, bananas, and agave syrup. Additionally, açaí bowls are among Meghan's favorite breakfast foods, with her even preparing one during an interview with lifestyle blogger Athena Calderone. (Find the recipe here.)

As the day goes on, Meghan prefers to stick with plant-based foods for lunch, having previously revealed that she tries to eat vegan during the week and then "have a little bit more flexibility" on the weekends. Loading up on healthy fats, vitamins, and fiber, Meghan loves eating avocado toast and even served it to her makeup artist during an afternoon tea she hosted in 2019. When staying at hotels, she'll step up her avocado toast game by ordering a poached egg on top for an added boost of protein. Meghan has also shared her fondness for seasoned vegetable quinoa, which she will eat as a side dish or on top of a salad.

When she isn't eating a plant-based meal, Meghan's go-to lunch is fish tacos with grilled white fish, peppers, and onions. As a proud California girl, she said that she was "conditioned to like Baja-style food from the womb" and that "few bites of food make [her] happier than that."

Related: The Best Taco in Every State

As a busy mother of two young children, Meghan ensures that she snacks on energy-boosting foods during the day. Some of her favorites are carrots and hummus, apples with almond butter, kale chips, and chia seed pudding—which she once said she makes on a weekly basis. Chia seeds are rich in antioxidants that help lower blood pressure, while their fiber content has been found to improve cholesterol.

Additionally, to avoid feeling sluggish in the afternoon, Meghan previously shared that she will blend herself a green juice with kale, spinach, apple, lemon, and ginger. "Green juice is a food-as-medicine philosophy for me," she told Delish in 2018. 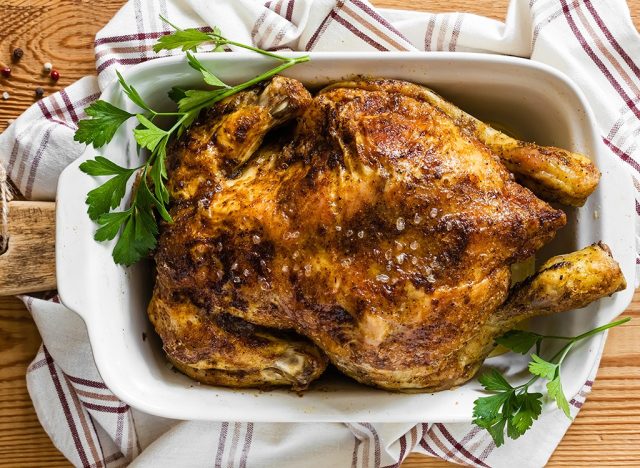 Despite eating a heavily plant-based diet, just like her sister-in-law, Meghan's dinner staple is a hearty gem: roasted chicken.

The classic dish even holds sentimental value in her household, as Meghan and Prince Harry were cooking it together when he proposed to her in 2017. Warming dinners like lamb tagine, slow-cooked chicken, and pot roast are also on the list of meals she enjoys cooking.

What's a day without dessert? Meghan has emphasized the importance of balance when it comes to her eating habits. In a 2018 interview with Best Health, she said, "Because I work out the way I do, I don't ever want to feel deprived. I feel that the second you do that is when you start to binge on things. It's not a diet; it's lifestyle eating."

One sweet treat Meghan loves making is homemade banana bread. While she keeps her recipe closely guarded, two of the secret ingredients have been revealed: ginger and chocolate chips—and apparently the dessert is quite a hit. During her and Prince Harry's 2018 Royal Tour of Australia, the Duchess baked a banana bread for the owners of the family-run farm they visited in Dubbo, New South Wales. According to Hannah Furness, a royal correspondent for the Daily Telegraph, the banana bread "went quite quickly."

For more celebrity news, check out 10 Celebs Who Look Exactly The Same As They Did 20 Years Ago.

Brianna Ruback
Brianna is the Editorial Assistant at Eat This, Not That! She attended Ithaca College, where she graduated with a degree in Journalism and a minor in Communication Studies. Read more about Brianna
Filed Under
celebrity food // celebrity news // Diet // News