If You Spot This in Your Mouth, You're Brushing Wrong, Says Study

You already know that forgetting to brush your teeth can result in cavities, but a new study in mBio says that it can also age your mouth's microbiome—after just 24 hours. "Most adults experience episodes of gingivitis, which can progress to the irreversible, chronic state of periodontitis, yet roles of plaque in gingivitis onset and progression to periodontitis remain elusive," wrote the authors, who found that "gingivitis development accelerates oral microbiota aging by over 1 year within 28 days" of not brushing and "rapid and consistent alterations in plaque microbiota, metabolites, and salivary cytokines emerged as early as 24 to 72 h after oral-hygiene pause, defining an asymptomatic suboptimal health." Read on to see what else they found—and to ensure your health and the health of others, don't miss these Sure Signs You've Already Had Coronavirus.

The piece was published in The American Society for Microbiology. "A new study shows that within 24-72 hours of the interruption of oral hygiene, there was a steep decrease in the presence of 'good oral bacteria' and the beneficial anti-inflammatory chemicals they are associated with. An increase of 'bad bacteria' typically present in the mouths of patients with periodontitis, a severe gum disease which can lead to tooth damage or loss, was also discovered," according to a release from the Chinese Academy of Sciences Headquarters. "We also found a sudden 'aging' of the bacteria in the mouth," said XU Jian, Director of Single-Cell Center at QIBEBT and senior author of the study. "Their oral microbiome had aged the equivalent of about a year in less than a month."

"After only 28 days of gingivitis, we found the study participants had the 'oral microbial age' of those a year older," said HUANG Shi, one investigator leading this study. 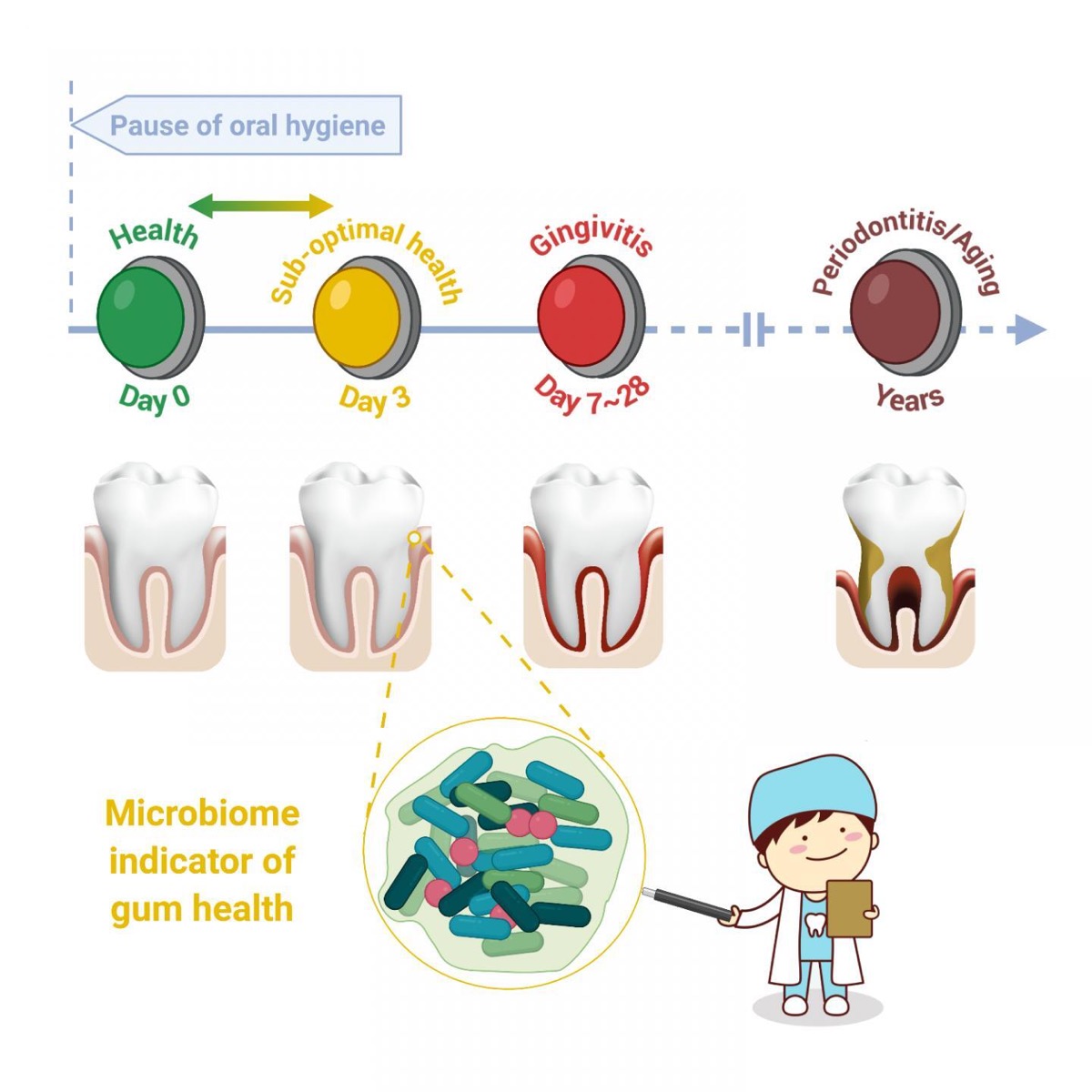 This Could Have Worldwide Implications

The findings in full are impressive. "A significant portion of world population still fails to brush teeth daily," say the authors. "As a result, the majority of the global adult population is afflicted with chronic gingivitis, and if it is left untreated, some of them will eventually suffer from periodontitis." In their study, "we identified periodontitis-like microbiome dysbiosis in an asymptomatic SoH stage as early as 24 to 72 h after oral-hygiene pause. SoH features a swift, full activation of multiple salivary cytokines but a steep synergetic decrease of plaque-derived betaine and Rothia spp. The microbial ecology during early gingivitis is highly similar to that in periodontitis under both taxonomical and functional contexts. Unexpectedly, exposures to gingivitis can accelerate over 10-fold the normal rate of oral microbiota aging."

In short: "Our findings underscore the importance of intervening at the SoH stage of gingivitis via proper oral-hygiene practices on a daily basis, so as to maintain a periodontitis-preventive plaque and ensure the healthy aging of the oral ecosystem."

RELATED: Dr. Fauci Just Said When We'd Get Back to Normal

Signs You Have Gingivitis—and How to Prevent It

"Gingivitis is a common and mild form of gum disease (periodontal disease) that causes irritation, redness and swelling (inflammation) of your gingiva, the part of your gum around the base of your teeth. It's important to take gingivitis seriously and treat it promptly. Gingivitis can lead to much more serious gum disease called periodontitis and tooth loss," says the Mayo Clinic. "The most common cause of gingivitis is poor oral hygiene. Good oral health habits, such as brushing at least twice a day, flossing daily and getting regular dental checkups, can help prevent and reverse gingivitis."

So don't forget your oral hygiene—and to protect your life and the lives of others, don't visit any of these 35 Places You're Most Likely to Catch COVID.

Alek Korab
Alek Korab is a Co-Founder and Managing Editor of the ETNT Health channel on Eat This, Not That! Read more about Alek
Filed Under
Body Health // Health Tips // News