Everyday Habits That Age You Faster, According to Science

Look younger and be healthier with this essential advice.

A study from Harvard indicates that "higher intakes of fruit and vegetables were associated with lower mortality"—so have your 5 a day to live longer. But how can you look younger doing so? Rather than chase the Fountain of Youth, simply avoid the Pitfalls of Aging. "You can't change what you were dealt with genetically but you can take control of other factors which will help to stay looking younger," says Dr. Eugene D. Elliott of MemorialCare. Read on—and to ensure your health and the health of others, don't miss these Sure Signs You've Already Had COVID.

The Sun Can Cause "Photoaging" and Make You Look Older

A tan makes you look young and cool—but it can have disastrous effects that can lead to wrinkles—or worse. "The sun's rays can take a toll on your skin. In the short-term, that can mean contending with a scorching sunburn," reports Yale Medicine. "But, there can also be long-term consequences lurking within the skin, even if you don't experience a burn. The sun prematurely ages the skin. Called photoaging, this can lead to skin cancer. Signs of this photo aging are:

Soda Can Make You Look Older

It's true—drinking sugary soda can age your cells. "Sugar-sweetened soda consumption might promote disease independently from its role in obesity, according to UC San Francisco researchers who found in a new study that drinking sugary drinks was associated with cell aging," says one notable study, as reported in Science Daily. "Regular consumption of sugar-sweetened sodas might influence metabolic disease development through accelerated cell aging," wrote the authors of the study in their conclusion. "The extremely high dose of sugar that we can put into our body within seconds by drinking sugared beverages is uniquely toxic to metabolism." Same goes for sugary foods.

Lack of Exercise Can Make You Look Older

"Imagine a 90-year-old," writes the Wellspring School of Allied Health. "They're almost always slumped over, right? Well, a lot of that comes from limited flexibility and spinal support in younger years. Low flexibility in your 20's and 30's could cause some problems later on, the main ones being joint or muscle pain, and an overall hunched-over look. There are certain types of exercises that can help you loosen your muscles and joints, like yoga or pilates. But you can also increase your flexibility even if you are only into cardio or weightlifting. Just make sure that you are going to start and end with warm-up exercises, and focus on stretching both before and after exercising every single time."

Disrupted Sleep Can Age You

Those with sleep apnea may actually age faster than the rest of us; if you have it, see a doctor. "Increasing sleep disordered breathing (SDB) severity and sleep disruption was associated with epigenetic age acceleration, independent of measured confounders. These associations were stronger in women than in men, suggesting that women may be particularly vulnerable to the adverse effects of SDB. Future work should study whether treatment reduces epigenetic age acceleration among those individuals with SBD," according to one recent study. "A good night's sleep can do wonders for your youthful appearance and since your face relaxes while you sleep that can also help soften fine lines on the face," says Andrea Paul, MD. It is recommended that you get eight hours of sleep per night.

Stress Can Make You Look Older

Don't stress out too much over this, but stress ages you. "The telomeres are the ends of the chromosomes—the structures inside each cell that contain the genes," reports Harvard Health. "Over time, the telomeres get shorter. When they get short enough, the cell dies. Chronic stress leads to shorter telomeres. And people with shorter telomeres are at greater risk for several major diseases, including heart disease and some forms of cancer. This is one more reason to reduce the amount of chronic stress in our lives. It's really not good for us." 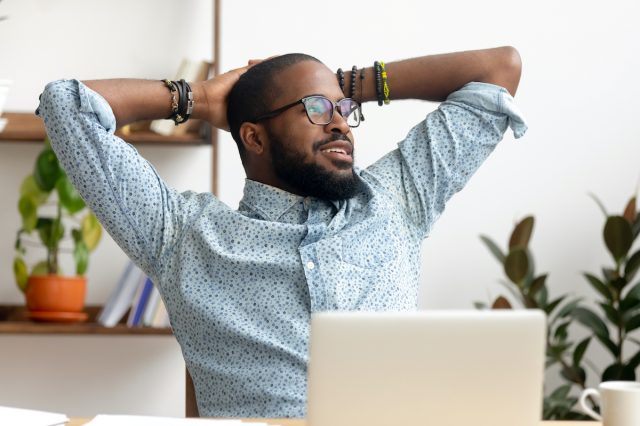 "Once you're hard at work at your desk (or immersed in TV or the internet), it can be tough to remind yourself that you've been sitting still for a long time," says Dr. Jacob Hascalovici MD, PhD, Clearing Chief Medical Office. "Good posture is important, but it's also very important to reset your posture by simply moving. Regular breaks can help your muscles and flexibility, improve your circulation, and can help you concentrate better. Rather than hampering your productivity, regular breaks, which can be simply standing up and stretching or taking a short, brisk walk, can also stave off the health risks of being sedentary for too long. Set an alarm for every 90 minutes to remind you to get up, and you'll be off to a great start."

"Again, we all do this from time to time," Dr. Hascalovici emphasizes. "We toss mail into a pile, throw clothes on a chair, let our 'to do' list get really long, and just generally fail to take care of the little things. If we took a few moments to attend to pesky tasks and put things away before bedtime, we would feel more composed and able to concentrate. (Clutter, researchers have found, can disrupt our concentration and make us feel more distracted and less able to stay on task, while letting things like unanswered messages or bills go for too long can add up to more effort and stress than if we had just taken care of them in the first place.) Sometimes we let emotions pile up too, holding in anger, resentment, bitterness or other negative emotions that can heighten our stress and hike our chances of getting a heart attack. Instead, we can figure out healthier ways of "putting our emotions away," such as improved communication, boundary setting, and mindfulness."

Smoking Can Make You Look Older

A landmark study eight years ago proved cigarettes can age you. "In what is perhaps the best detail of the study, researchers used the annual Twins Days Festival in Twinsburg, Ohio (the 'Largest Annual Gathering of Twins in the World!') to round up the 79 identical pairs they include in the report. A panel of three plastic surgery residents compared the faces of the twins, one of which had been smoking for at least five years longer than the other," reported the Today Show at the time. "They identified a few major areas of accelerated aging in the faces of the smoking twins: The smokers' upper eyelids drooped while the lower lids sagged, and they had more wrinkles around the mouth. The smokers were also more likely to have jowls, according to the study, which was published in the journal Plastic and Reconstructive Surgery."

Not Doing This Can Make You Look Older

"I think the single most important thing you can do to look younger is smile. It decreases the number of wrinkles that appear over time on your face," says Dr. Leann Poston. "Smiling makes you happier and gives you more energy. A positive attitude encourages better eating habits and more exercise!" And to get through this pandemic at your healthiest, don't miss these 35 Places You're Most Likely to Catch COVID.

Alek Korab
Alek Korab is a Co-Founder and Managing Editor of the ETNT Health channel on Eat This, Not That! Read more about Alek
Filed Under
Aging // Body Health // Health Tips // News // Skin & Beauty