Drinking Habits That May Cause Liver Damage, According to Science

No, we're not just talking about alcohol.

Did you know your liver is about the size of a football? The essential organ is mainly responsible for filtering blood that comes straight from the digestive tract, just before it passes it on to the rest of the body. It also helps to remove toxins from the bloodstream, which is why it's important that you don't overwhelm the liver with substances that can hinder these important functions, such as alcohol and added sugars.

Alcohol sales surged in 2020, as more people spent time at home and also combatted high-stress levels during the COVID-19 pandemic. Unfortunately, Americans' livers are suffering as a result. For example, Keck Hospital at USC in Los Angeles recently reported that admissions for alcoholic hepatitis and liver failure increased by 30% last year, in comparison with the year prior. This particular jump was largely associated with alcohol abuse, however, alcohol isn't the only beverage that can do damage to the organ.

Below, you'll see five drinking habits that could be wreaking havoc on your liver. And then, don't miss 15 Underrated Weight Loss Tips That Actually Work for tips on how you can get in shape this year.

If you're a woman, drinking 1+ servings of alcohol per day.

While the most recent USDA dietary guidelines continue to say that drinking up to one glass of alcohol daily is fine for women's overall health, one study suggests otherwise. According to a 2018 study published in the journal Lancet Public Health, the likelihood of a healthy woman developing cirrhosis—or late-stage scarring of the liver caused by liver disease—was greater in those who reported drinking alcohol daily than those who drank less often.

Bottom line: Having one glass of alcohol every other day (or less) may be the key to keeping your liver in tip-top shape.

If you're a man, drinking 2+ servings of alcohol per day.

The USDA Dietary Guidelines recommend that men cap their alcohol consumption at just two alcoholic drinks per day to maintain good health, however, it's important to make sure the measurement is correct. A standard drink in the U.S. is defined as 14 grams of alcohol—this could look like 12 ounces of beer, 5 ounces of table wine, or 1.5 ounces of liquor. Unfortunately, women have a higher risk of liver injury compared with men for any level of drinking, as per a 2019 study in the journal, Hepatology.

In a different study, it was found that men (and women) over the age of 50 were at higher risk of both cirrhosis and non-cirrhotic liver damage when they drank alcohol without a meal, compared to those who only drank at mealtimes. Even more interesting, the study suggests occasional binge drinking is less likely to cause liver damage than drinking a small amount of alcohol daily. According to the CDC, men are twice as likely to binge drink than women.

Bottom line: Drinking alcohol with meals may be key for preventing liver disease in older males.

Get even more healthy tips straight to your inbox by signing up for our newsletter.

If you're a kid, drinking soda at least once weekly.

According to a 2017 study published in the Journal of Hepatology, 90% of the 271 obese children and adolescents that were included reported drinking soda and other sweetened beverages at least once a week. Liver biopsies revealed that 37.6% of the kids had a condition called nonalcoholic steatohepatitis (NASH), which is a form of nonalcoholic fatty liver disease (NAFLD).

Those with NASH experience fat buildup in the liver, which is accompanied by inflammation and liver cell damage. This can cause scarring in the liver, called cirrhosis, which can then lead to liver cancer. Researchers suggest that lowering children's fructose intake may help to lower their risk of NASH and NAFLD.

Bottom line: Limiting kids' consumption of soda and other sugary beverages may help to prevent the onset of detrimental liver conditions.

If you're an adult, drinking diet soda. 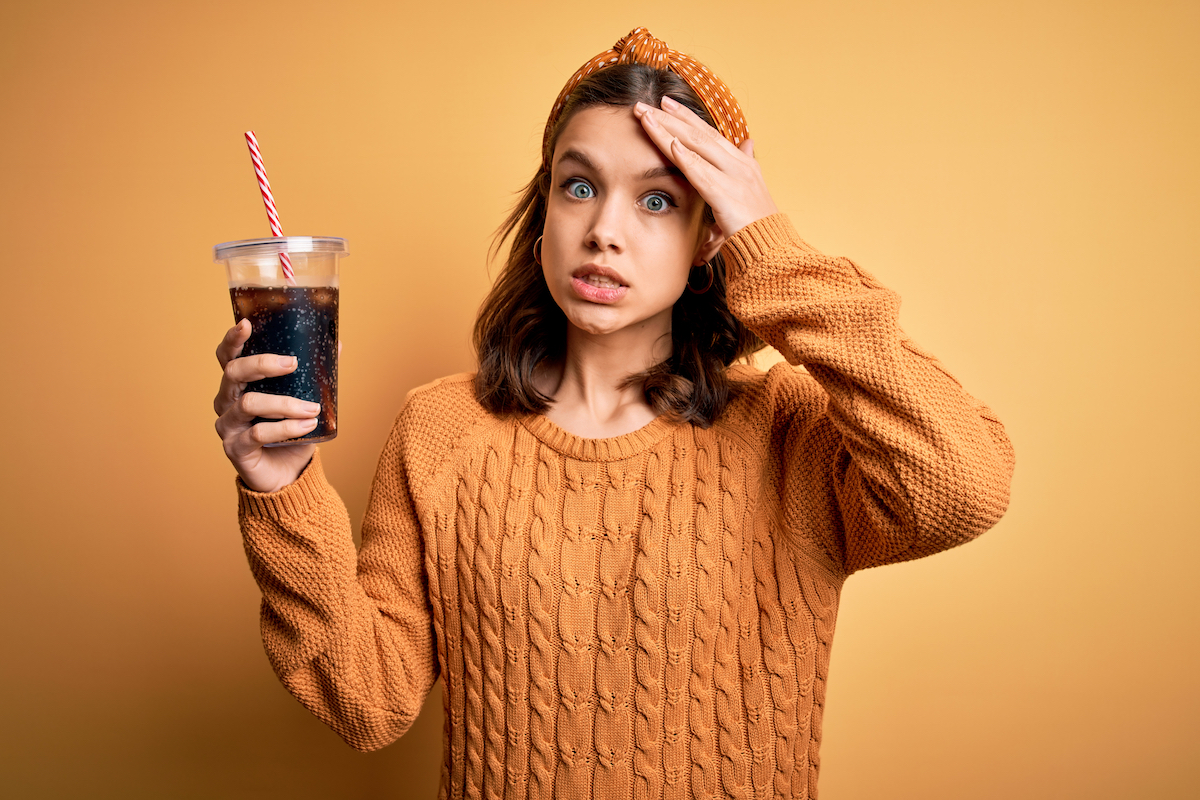 One perk of opting for diet soda over normal soda is that you skip out on all of the excess added sugar. However, one study suggests there is one major pitfall to going the sugar-free route. According to a 2008 study published in The Canadian Journal of Gastroenterology, people who drank Diet Coke were more likely to suffer from moderate to severe NAFLD.

Bottom line: Limit your intake of the diet stuff just as you would with its sugary counterpart.

If you're an adult or kid, drinking any type of soft drink.

If you look at the nutrition label on the back of a can produced by any of the top leading soda brands, you'll more than likely see high fructose corn syrup (HFCS) listed as one of the top three ingredients. The hyper-sweet artificial sugar, derived from corn syrup, has been linked to various health problems, including obesity, diabetes, and heart disease. However, studies have also shown that high intake of HFCS can also trigger NAFLD, according to the National Institutes of Health. In fact, one such study revealed that mice who ate a diet rich in HFCS for long periods of time experienced a deterioration of their intestinal barrier.

Bottom line: The less HFCS you consume, the more you'll reduce your risk of NAFLD and other poor health outcomes.