COVID is Rising Again in These 29 States

Numbers are edging up from Alabama to Wisconsin.

Dr. Rochelle Walensky, Director of the Centers for Disease Control and Prevention, has said now is not the time to let our guard down. And yet some states—like Texas and Mississippi—are lifting restrictions and mandates. "It should also come as sobering news that on Sunday, for the first time in more than a month, a majority of states—29 in all—reported rising case counts," reports USA Today. "These are the states with more infections in the latest week than a week earlier." Read on—and to ensure your health and the health of others, don't miss these Sure Signs You've Already Had Coronavirus.

Despite cases going up, Alabama Gov. Kay Ivey was expected to lift a mask mandate this week. "All along, Governor Ivey has made clear that she prefers personal responsibility to government mandates. We are optimistic that our state is heading in the right direction, and we still have some work to be done," Ivey spokesperson Gina Maiola told AL.com.

"Governor Jared Polis revealed on February 26 that the number of current COVID-19 cases in Colorado represented a substantial increase over numbers from the past week or two; he used the rise to explain why safety protocols must be maintained even as a broader range of people become eligible for vaccination," reports Westword.

"Connecticut restaurants and retail outlets will likely soon be allowed to operate at greater capacity, Gov. Ned Lamont indicated Monday, hinting at a major rollback of COVID-19 restrictions," reports the Hartford Courant. "Lamont's office is considering elimination of the state's travel advisory, increasing capacity for entertainment and sports venues and allowing restaurants to expand to 75% of capacity — or even full capacity with masks and social distancing requirements."

"The University of Delaware, which is allowing more students to live on and take in-person classes at its Newark campus for the spring semester, reported a record 324 cases among students and staff in the week that ended Sunday. That's five times higher than the previous week and nearly three times more than the previous weekly high of 134 in mid-November, before Thanksgiving break," reports WHYY. 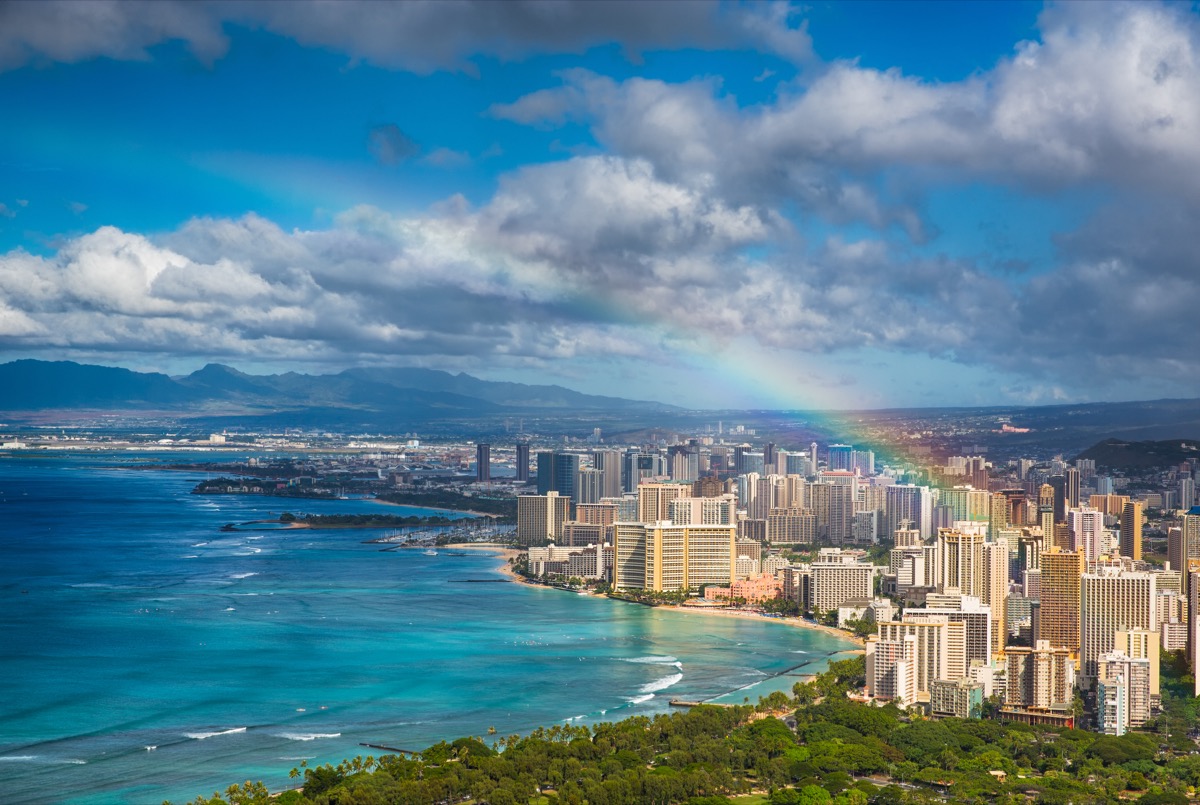 "Hawaii Department of Health officials today reported two new coronavirus-related deaths and 20 new infections, bringing the state's totals since the start of the pandemic to 441 fatalities and 27,640 cases," reports the Star-Advertiser. "The two deaths were on Oahu, which now has a death toll of 351. State health officials said this afternoon the latest deaths were a man in his 60s and a woman in her 70s, both of whom had underlying health conditions when they were hospitalized with COVID-19."

"If the regional health board sticks to its plan, masks should again be mandatory throughout eastern Idaho's most populous county," reports the Post Register. "A two-month decline in the region's reported coronavirus infections halted last week, raising daily case averages from 40-50 to more than 60. The increased case counts locally come as three more infectious virus variants have been detected in Idaho, according to the state health department."

"On Monday, Chicago Public Schools opened to the most students since the pandemic began last March," reports the Chicago Tribune. "Up to 37,000 kindergarten through fifth-graders were expected to resume in-person classes, part-time, on Monday, though actual turnout has generally been lower than the number of students who chose the in-person option. Concerns about both the reopening plan and about the quality and equity of remote learning are among the reasons some CPS parents indicated on social media that they were participating in a 'sick-out.'"

"The Louisiana Department of Health reported 550 more confirmed coronavirus cases and 16 more confirmed deaths in its noon update Tuesday," reports NOLA.com. "The number of hospitalizations stayed the same, and the number of patients in need of ventilators decreased by two. There are also 60,474 total 'probable' coronavirus cases in Louisiana, according to the agency's dashboard."

"The Maine Center for Disease Control and Prevention reported 128 new coronavirus cases on Monday and one new death. The new death was a man in his 60s from Oxford County," reports WMTW. As for the vaccine: "The state has switched to an age-based strategy for the vaccine rollout saying recent scientific data indicates that age is among the strongest predictors of whether an individual is likely to get seriously ill and die from COVID-19."

"The Maryland Department of Health released updated coronavirus numbers Tuesday morning," reports Fox Baltimore. "As of 10 a.m. there are 383,170 confirmed cases of COVID-19 in Maryland, 468 cases have been reported in Maryland in 24 hours."

"Michigan reported the highest number of newly confirmed COVID-19 cases in more than a month on Wednesday," reports ABC 12. "The Michigan Department of Health and Human Services reported 1,536 new COVID-19 illnesses on Wednesday for a total of 591,753. That is the highest daily increase in Michigan since Jan. 29. State health officials reported five deaths attributed to the coronavirus on Wednesday, which increase Michigan's total COVID-19 deaths to 15,563."

Some good news here: "After months of grim milestones in the COVID-19 pandemic, Minnesota will reach an especially bright one on Thursday: The count of Minnesotans now completely vaccinated will top the total number of known COVID-19 cases in the entire pandemic," reports MPR News. "After a wobbly start, state vaccination trends are running in the right direction, enough so that a buoyant Gov. Tim Walz said Wednesday that June weddings and a Minnesota State Fair this year were within reach."

"Republican Mississippi Gov. Tate Reeves announced at a news briefing that he is rescinding all county mask mandates and removing statewide restrictions on nearly all businesses," reports CNBC. "I am replacing our current orders with recommendations," Reeves said. "The only rules that will remain in this order are a capacity limit of 50% on indoor arenas and those that govern K-12 schools."

"Health department data shows Nebraska has had 201,608 positive cases since the pandemic began. So far, 155,933 of those cases have recovered," reports KTIV. "The state is currently reporting 150 active hospitalizations due to the virus. There have been nine additional virus-related deaths in Nebraska, bringing its death toll to 2,091."

Some encouraging signs: "Nevada's COVID-19 test positivity rate continued its fall since dropping under 8% on Friday, according to data released on Tuesday," reports 8 News Now. "The state's test positivity rate fell below 10% on Feb. 20 and has continued to drop since Jan. 14, coming in at 7.3% on Monday, down from 7.5% the previous day."

"New Jersey is on the brink of one year since it reported its first case of the coronavirus in the state, a milestone not lost on Gov. Phil Murphy as he announced easing of some restrictions Wednesday," reports NBC 10. "More than a year ago, we knew that we would have to prepare our state – and all of you – for the worst and hope for the best," Murphy said. "None of us could even imagine what it was we ultimately would be up against."

The COVID Rise may have been temporary. "New modeling data indicates the vaccine is dramatically reducing the number of new COVID-19 cases in New Mexico. Meanwhile, only a handful of the state's counties are getting the newest Johnson & Johnson vaccine, so far," reports KRQE. "In a virtual news conference Wednesday, state health experts further detailed the rollout of the more than 17,000 doses of Johnson & Johnson (J&J) vaccine New Mexico received this week. Only eight counties received shipments of the third available vaccine and the state says more shipments are likely weeks out from arriving."

The COVID variant is proving dangerous in the city and elsewhere. "About 735 cases of a coronavirus variant that emerged in New York City in November have now been identified in the U.S., including 585 in the last two weeks, a federal health official said," reports Bloomberg.com. "The mutation has traveled extensively through the metropolitan New York region, and individual cases have also been found in 14 other states, including Texas, Wyoming and Maryland, according to Gregory Armstrong, director of the Centers for Disease Control and Prevention's Advanced Molecular Detection Program."

"The Oregon Health Authority announced 269 new cases of COVID-19 on Tuesday along with 13 new deaths, as the state identified in Douglas County the first case of a variant strain of coronavirus originally detected in Brazil," reports Oregon Live. "The Brazilian variant, also known as P.1, was first detected in people traveling from Brazil to Japan in January. The variant appears to be more contagious and has reinfected people previously immune from having contracted the original virus, Douglas County health officials say."

"Health officials in Rhode Island recorded an additional nine COVID-19 deaths on Wednesday and 436 new cases," reports WJAR. "Of the 436 new cases, 376 were recorded on Tuesday. The other 60 were added to previous dates. The total number of cases confirmed in the state since the start of the pandemic is 127,285."

Ignoring medical experts, "Texas said Tuesday that it was lifting its mask requirement and would allow businesses to fully reopen, the most expansive step by any state to remove coronavirus restrictions as Americans across the country are eager to emerge after a year of isolation in the pandemic," reports the New York Times. "The move by Texas, with its 29 million residents, goes further than similar actions in other states and cities that are rushing to ease as many limits as they can." "It is now time to open Texas 100 percent," Gov. Greg Abbott said.

RELATED: If You Feel This You May Have Already Had COVID Says Dr. Fauci

In the rase between variants and vaccines, "West Virginia Gov. Jim Justice is lowering the overall age to get the coronavirus vaccine in the state," reports WSAZ. "It will be lowered from age 65 to 50 in West Virginia beginning Wednesday, Justice announced during his COVID-19 news conference. Now, all West Virginians over the age of 50 can get the coronavirus vaccine, according to Gov. Justice. The state will still prioritize those who are age 65 and above, but this will open the floodgates for others."

How to Stay Safe No Matter Where You Live

Follow the public health fundamentals and help end this pandemic, no matter where you live—wear a face mask that fits snugly and is double layered, don't travel, social distance, avoid large crowds, don't go indoors with people you're not sheltering with (especially in bars), practice good hand hygiene, get vaccinated when it becomes available to you, and to protect your life and the lives of others, don't visit any of these 35 Places You're Most Likely to Catch COVID.