14 Things You Should Never Eat at a Restaurant

Avoid these common foods to minimize your risk of food poisoning on your next meal out.

When you're sitting at a restaurant, have you ever wondered: How long has that bottle of ketchup been sitting on the table? How fresh is the bread in that basket? From drastically overpriced to downright dirty, there are some menu items to never order at a restaurant, no matter how much you love the place. We spoke to food safety experts, dietitians, and chefs and compiled a list of things you should completely avoid on your next meal out. 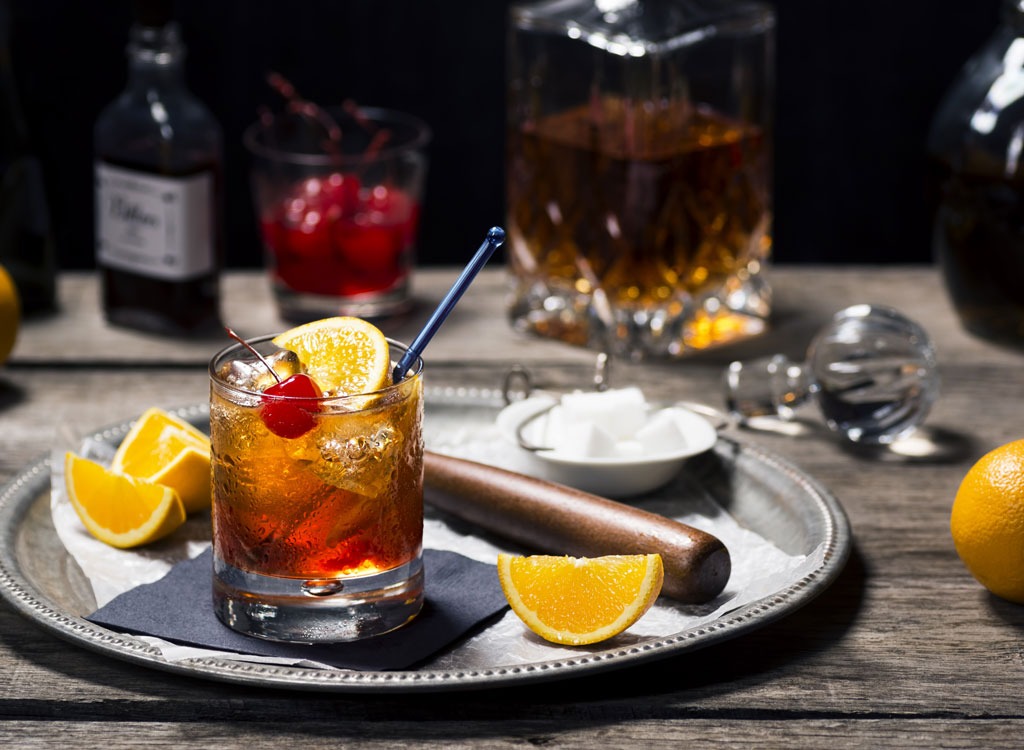 Kimberly Barnes, founder of Might Be Vegan and a private, plant-based chef in Atlanta, GA, recommends avoiding lemon and lime slices and other drink garnishes at bars and restaurants. Why? A study of 76 lemons at 21 different restaurants in The Journal of Environmental Health found that 53 of them contained microbial growth. Of the positive culture results, seven were E. coli.

Food blogger and editor of Eat, Drink, Be SD Michelle Stansbury strongly warns against eating or using the garnishes at the bar because bartenders often aren't held to the same sanitary standards as the kitchen. It's likely that the fruits in drinks are unwashed and that they sit out for days without being refrigerated. Do you recall your bartender washing their hands between sorting cash and dropping a cherry in your cocktail? We figured.

And for more, sign up for our newsletter to get daily recipes and food news in your inbox!

A staple in vegan and Asian cuisine, raw sprouts are often added to salads and sandwiches for extra crunch. But this crunch can come at a cost. According to Barnes, the humid temperatures that sprouts need in order to grow can also be the perfect breeding ground for Salmonella, Listeria, and E.coli. After a foodborne illness outbreak at Jimmy John's, the company decided to remove sprouts from their menu.

Barnes also warns against tap waters, suggesting you stick to the bottled stuff despite the price tag. "Tap water, while under federal regulations from the EPA, can still contain trace amounts of harmful contaminants, including lead, chlorine, mercury, and herbicides. And it is our personal responsibility to limit our own exposure to these trace elements, as the long-term health effects of chronic exposure are questionable."

Candess Zona-Mendolla, a food safety advocate and editor of MakeFoodSafe.com, says raw oysters are one of the riskiest choices on the menu at even the best fresh seafood joints. "These mollusks are carriers of two scary foodborne illnesses—Norovirus and Vibrio. Ever heard about flesh-eating bacteria? That's Vibrio. We see a rise in cases during the summer months, as Vibrio loves warm waters. If oysters have been cooked, they are a-ok to eat." Google a picture, and we promise raw seafood won't be on your dinner plate for a long time. 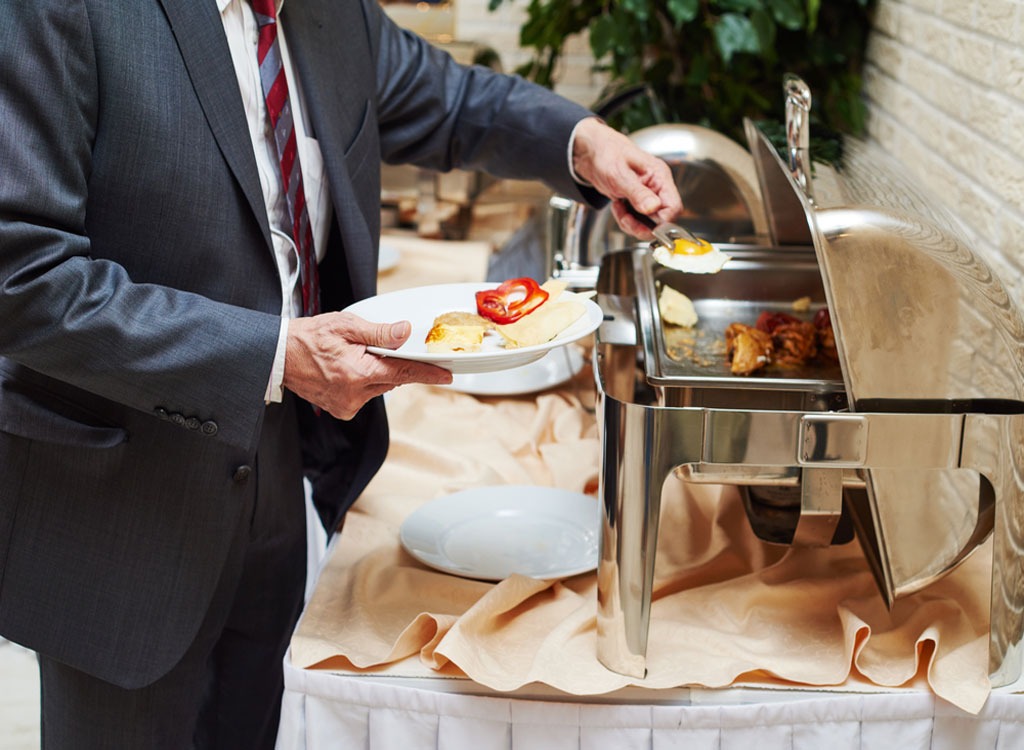 Is that dinner salad bar calling your name? Just walk away. Any dish that's been sitting out for too long is a recipe for food poisoning. Although recent regulations have improved buffet food quality, foods served in buffets are at risk for contamination from other customers and restaurant employees. Zona-Mendolla says to look for buffets that have food warmers and to remember that hot food should be hot, and cold food should be cold. Be sure to also avoid dishes that use serving spoons from other dishes to keep cross-contaminating bacteria at bay. 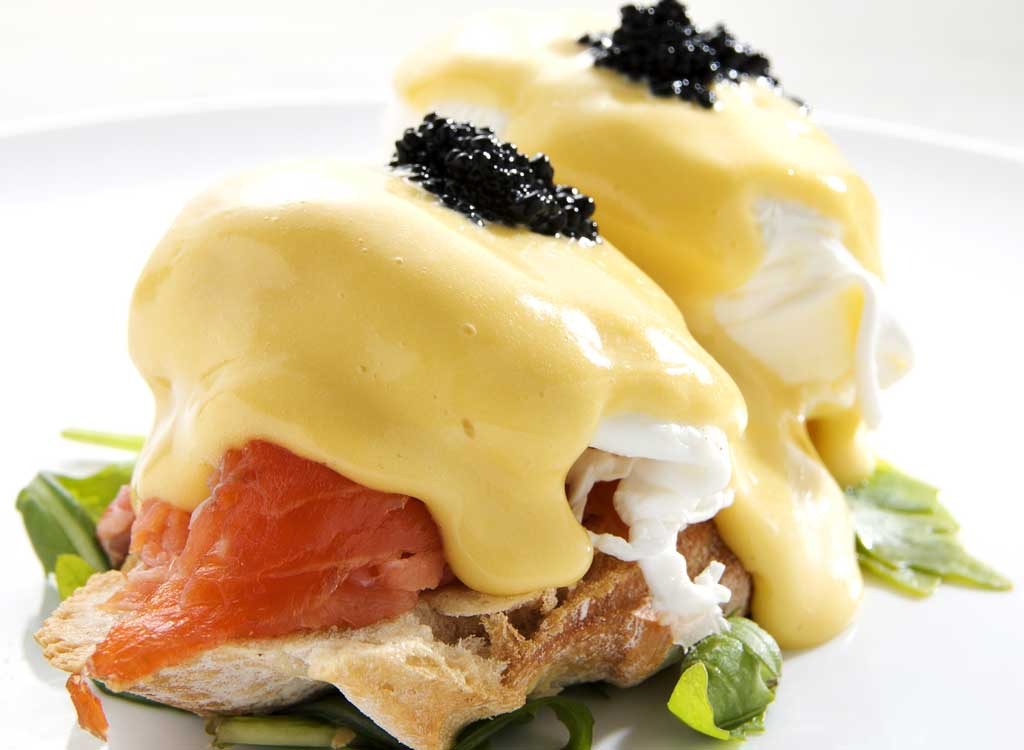 Anthony Bourdain once said eggs Benedict is the least favorite dish to prepare among chefs, so it's likely you're eating a premade, and oftentimes old, sauce.

Thinking of pairing your eggs Benedict with some freshly squeezed orange juice? You may want to rethink that decision for the same reason you pass on adding garnishes to your drink. Freshly squeezed juices are often teeming with bacteria, unlike pasteurized juices. 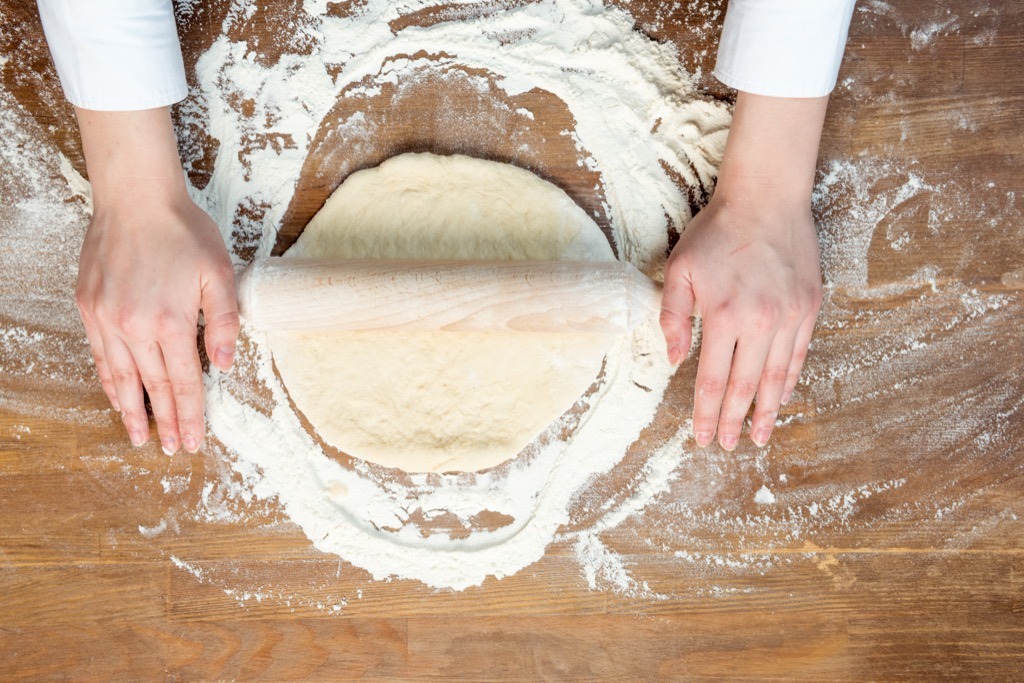 Some pizza places will give customers with kids raw pizza dough to play with and use to prepare their own mini pies. Zona-Mendolla warns against this practice, noting that raw flour products were connected to an outbreak of E.coli a few years ago. Because raw flour products haven't been treated to kill harmful germs, playing with or handling raw dough can increase your risk of foodborne illness.

Moreover, the eggs in the raw dough may contain Salmonella, which can make you sick if they're lightly cooked. Be sure that any foods that involve using dough, eggs, and batter are handled with care and fully cooked.

We already know it has empty calories—but there are other reasons to skip the bread basket when you're dining out. According to former server and author Debra Ginsburg's Waiting: The True Confessions of a Waitress, bread baskets tend to circulate from table to table. Yes, you heard that right.

The bread in your basket could likely be the scraps from your neighbors' table. Bar snacks call for even more unwanted sharing. Many hands have passed over your popcorn or peanuts, which may have been sitting out for days by the time you eat it.

Never order fish on a Monday

In Anthony Bourdain's Kitchen Confidential, he wrote that it's likely that your Monday fish special can include fillets that are three days old. Bourdain, who spent most of his culinary career in New York City kitchens, said in the book that because most seafood markets aren't open on weekends, Monday's fish is old and, well, fishy.

Bottled ketchup on the table

Former server Aaron Norris says condiments, especially ketchup in glass jars, are always something to avoid. The restaurant staff often spends hours at the end of long shifts marrying partially empty bottles, so there's no way to tell how long the stuff at the bottom has been there…leading to sour and sometimes even explosive ketchup.

In a process called pasteurization, milk is heated at a high temperature for a certain amount of time in order to ward off bacteria and kill harmful organisms. Certain soft cheeses like brie, queso fresco, and camembert aren't pasteurized, though. Therefore, you run a high risk for Listeria. According to the CDC, listeria is 50 to 160 times more likely to infect unpasteurized cheeses than pasteurized cheeses.

A soup special is a perfect way to disguise the scraps from yesterday's leftovers as a new and fresh dish today…and tomorrow.

Anything you could make yourself

This one may go without saying, but we think it is a valid piece of advice when trying to get the best bang for your buck. Tanner Agar, CEO of restaurant Rye Mckinney, says that he recommends guests always try to order something that they could not have made themselves. "Eating out is a time to try something new or something very technically involved. By ordering something you can make, you make it impossible to have that thrill of a surprise that a great, unexpected dish can create."