17 Things You Need to Know About Kombucha

One can't help but be intrigued by the drink's magical rep—even if its benefits lack scientific evidence.

By now, you've probably heard of kombucha, but here's some quick back story: Kombucha is a potentially healthful beverage that's produced by fermenting sweet tea with a symbiotic culture of yeast and bacteria. Although it may host a variety of health benefits, including weight loss, when consumed in moderation, it is by no means the cure-all that some claim it is.

We've done some digging to create this unbiased, inclusive, research-backed list about everything you need to know about this probiotic-themed drink. (Note: If you do decide to sip this, make sure you know it has been properly brewed!) One thing we know for certain, though: You should always steer clear of these unhealthiest drinks on the planet!

Kombucha has been around since 221 BC. 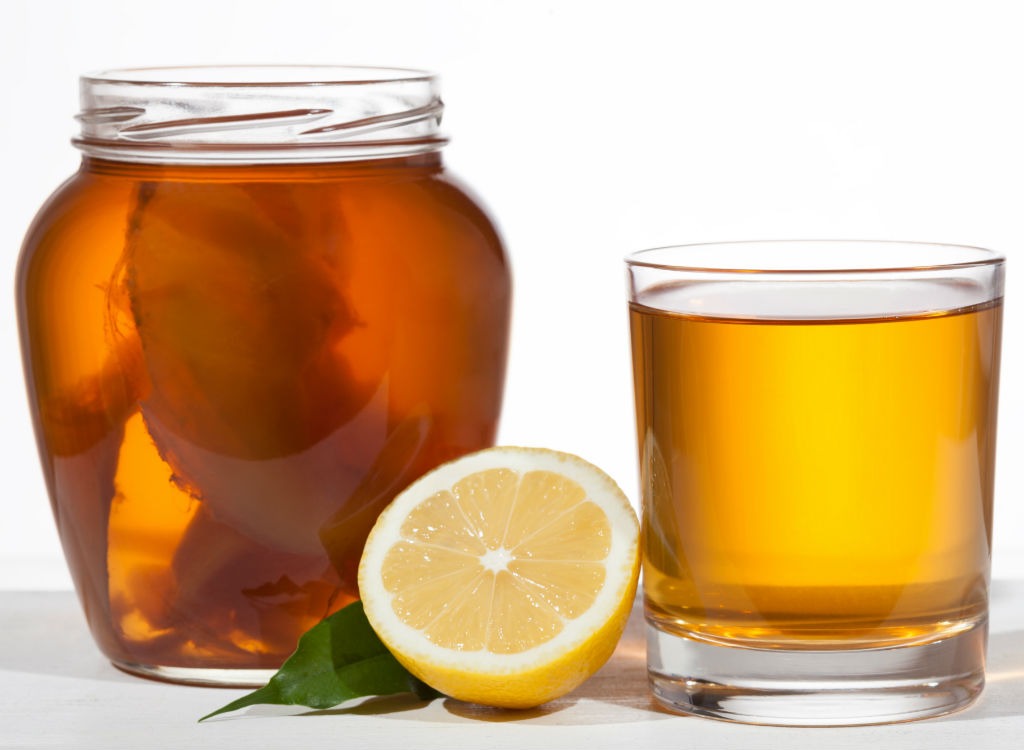 Kombucha first appeared in China in 221 BC and was known as "The Tea of Immortality." Since then, has been used all over the world as a natural medicine.

Kombucha is fermented with a symbiotic colony of bacteria and yeast, also known as SCOBY, which can help keep your gut healthy and promote regular bowel movement. Not to mention, this probiotic film consumes over 90 percent of the sugar during fermentation, turning a sweet tea into a bloat-banishing lifesaver. Kombucha has earned the nickname "mushroom tea," due to the mushroom-shaped mass that results from the bacteria and yeast reproducing. While this may seem a little off-putting, many view it as a small price to pay for a flat belly.

Kombucha can help with weight loss.

While the weight loss results are limited, kombucha only contains 30 calories per cup—and once the taste is acquired, it can replace calorically-dense fruit juices or carbonated beverages. Plus, animal studies indicate the tea can encourage a calorie-reduced diet. 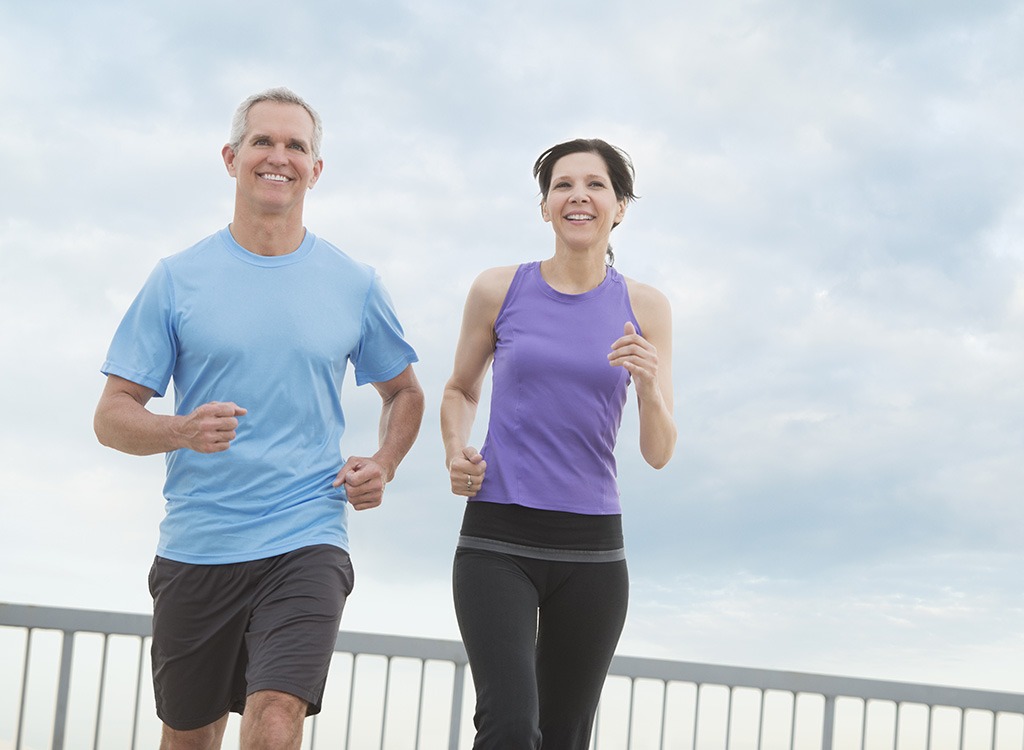 According to many arthritis suffers, athletes, and even doctors, kombucha helps nix joint pain, especially in the knees. Although little scientific research exists to prove these findings, some believe the tea contains enzymes that assist in the repair of muscle tissue, while others simply credit the tea with building SCOBYs in your knees. Either way, if you suffer from arthritis and/or joint pain, it's worth trying. 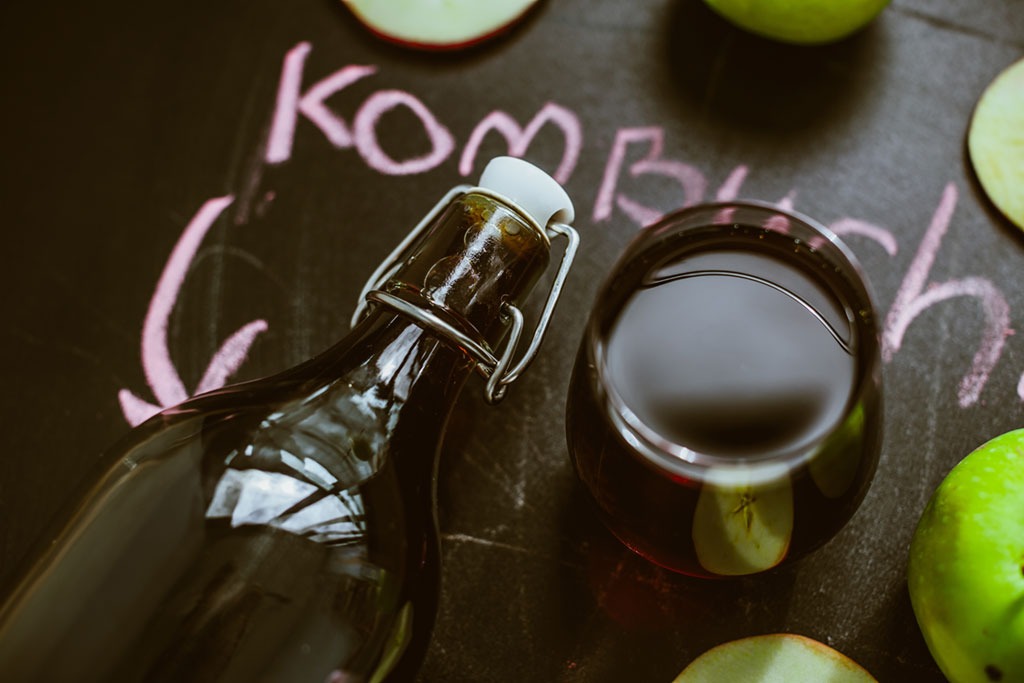 Kombucha yeast feeds on sugar, which produces alcohol. According to the FDA, any beverage containing more than 0.5 percent alcohol is considered an alcoholic beverage. Therefore, if you purchase bottled kombucha, you'd find trace amounts—but not enough to be labeled alcoholic. Homebrews, however, can have you sipping on as much booze as you'd find in a beer if you are not careful. In fact, for the first 5-6 days, the alcohol content in the tea rises to as much as 5.5 g/L and then slowly drops. This means excessive consumption can leave you with a rapid pulse, sweating, and vomiting—AKA a hangover. 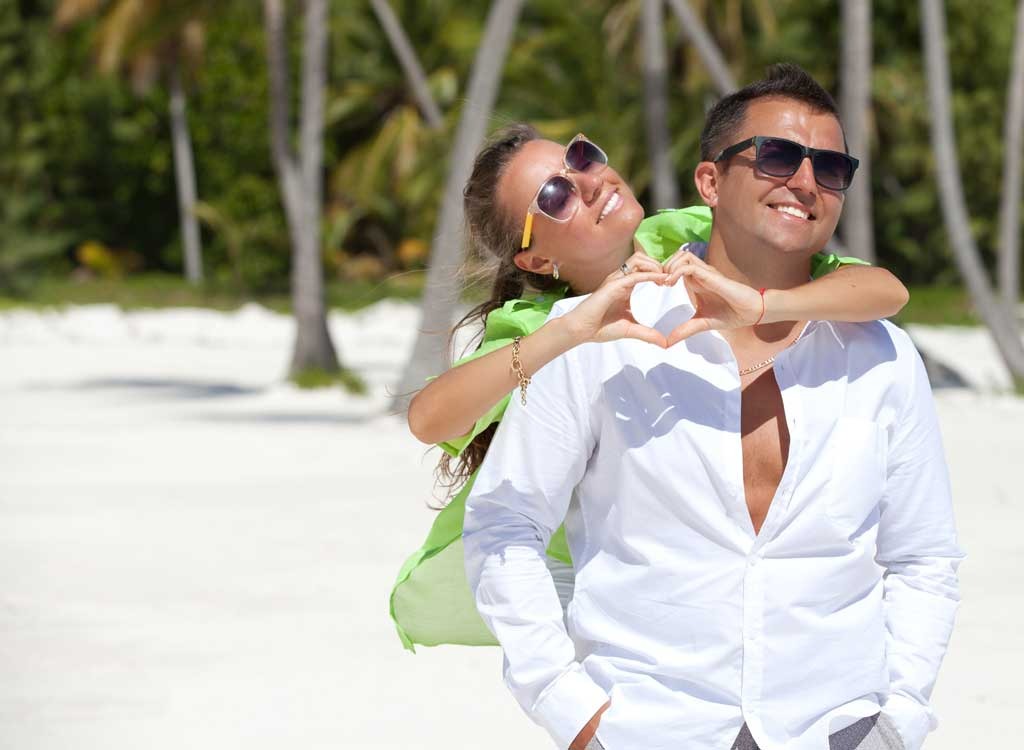 If you or anyone you know suffers from anemia, you understand the role iron plays in energy. Organic acids found in kombucha make iron more available to the body, increasing blood hemoglobin and oxygen flow. In other words, you're more apt to knock out your to-do list or make it that 6 p.m. spin class after a long day at work. Not to mention, the tea contains vitamin C, which increases iron absorption. Find out more about the best iron-rich foods!

Kombucha is an acidic beverage that, over time, breaks down the enamel of your teeth. (Yikes!) However, citrus fruits—which host a plethora of health benefits—cause just as much damage, too. To keep your pearly whites safe, rinse your teeth with water after consumption and sip it through a straw and in moderation.

Sadly, you can't trade your cup of joe for a cup of kombucha tea. With anywhere from 2 to 25 milligrams (GT's kombucha ranges from 8 to 14 mg) as compared to coffee's 95, it's hardly going to get you going. If more energy is your goal (and isn't it for everyone?), nosh on these best foods for energy.

When it comes to clearing arteries, research has proven kombucha's cholesterol-lowering effects, as reported in a recent review. In fact, animal research found that kombucha significantly reduced levels of LDL cholesterol, while simultaneously raising HDL levels.

According to a study from 1995, two of 32 homebrewed batches contained toxic Candida albicans. As Candida yeast spreads, it can penetrate through the walls of your gut and wreck havoc on body tissues and organs, compromising immunity, as well as causing weight gain, joint pain, drowsiness, and gas. It's important to understand that kombucha is environmentally unique and can become contaminated when homebrewed. An overgrowth of candida is reportedly more common than you'd expect, which is why you'll want to check with your doctor—and bookmark these foods that cure candidiasis.

As previously mentioned, kombucha is a probiotic beverage which does more than keep your gut healthy. In fact, gut microbiota plays an essential role in mental health. Therefore, drinking the tea can enhance mood, reduce the risk of depression and anxiety, and even promote mental clarity.

Kombucha may cause metabolic acidosis. 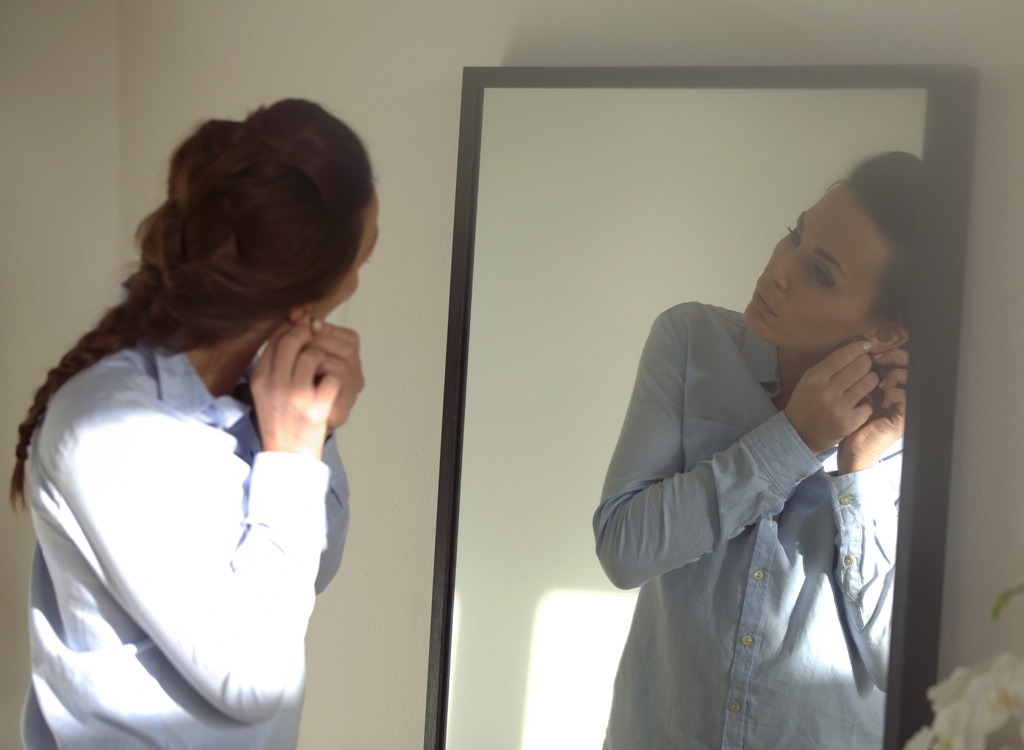 Back in the nineties, the Center for Disease Control issued a report linking kombucha with metabolic acidosis in women. This illness occurs when too much acid builds up in the body and currently affects approximately 52 percent of women; however, it can also occur in men. These findings further support the notion that kombucha should be sipped in moderation.

Kombucha could give you an upset stomach.

As with the ingestion of all acidic foods, it is possible to suffer from digestive issues such as upset stomach, stomach ulcers, and heartburn. However, only a small percentage of people experience these symptoms. Nonetheless, if you have a sensitive stomach, it may be best to steer clear. 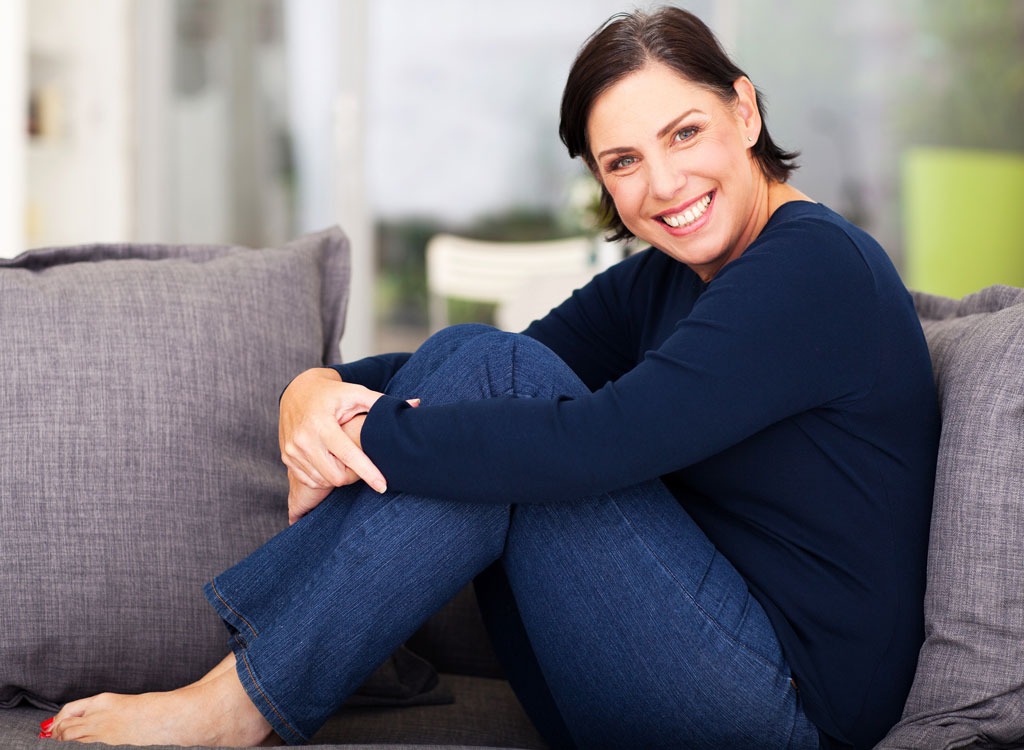 According to a Food Chemistry study, kombucha boasts antioxidant effects that are enhanced during the fermentation process. In other words, the fermented tea was successful in preventing or delaying cancer-causing cell damage. Some studies have also suggested it may have anticarcinogenic effects on tumors and be useful for treating prostate, renal, and lung cancers. On a less serious note—but still on the topic of aging—avoid these foods that make you age faster at all costs. 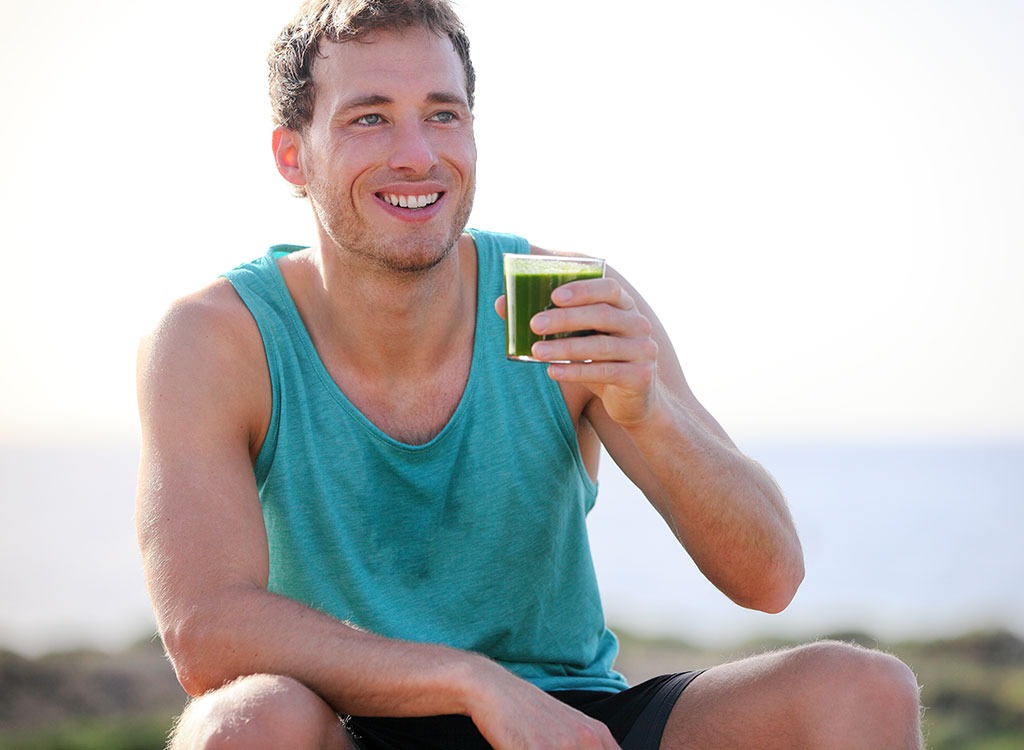 Kombucha contains detoxifying glucuronic acid (GA), according to a Comprehensive Reviews in Food Science and Food Safety review, which combines with toxins in the body and converts them into an excretable material. Other research indicates the tea may prevent the absorption of industrial toxins. For another detox drink to sip on as an alternative, we love apple cider vinegar. Check out these apple cider vinegar detox drinks to give it a try.

While you know exactly what is going into homemade kombucha brews, the ones on grocery store aisles may contain added sugars to boost flavor. As a general guideline, opt for kombucha batches with 5 grams of sugar or less, like Humm's new low-sugar flavors. And as always, if there is an ingredient that you can't pronounce, put it back. 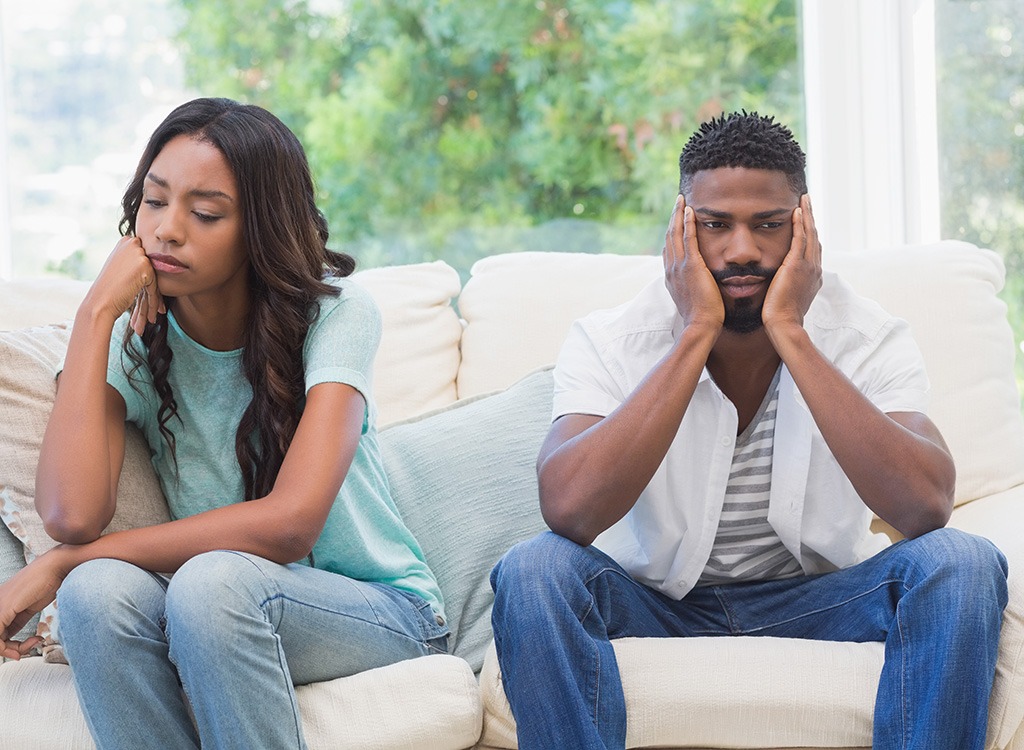 Assuming you're not drinking the kind of added sugar, kombucha has been used to lower blood sugar—dating back to as early as the 1920s. Ironically, there isn't sufficient evidence that it can treat diabetes, but recent studies on diabetic rats have found that the acidic drink to significantly reduce blood sugar levels.