The pouring process is only the start of it!

This St. Patrick's Day, you could gulp down some cheap beer enhanced with a few drops of green dye, but wouldn't you rather enjoy a rich stout with a creamy froth that's been expertly crafted for 260 years? Yep, we're talking about Guinness, the unofficial drink of St. Patrick's Day.

In honor of the great Irish beer, we've gathered 15 fun, crazy, and interesting Guinness beer facts. And if you're looking to learn about more beloved foods, check out these 15 Classic American Desserts That Deserve a Comeback.

If your typical setting for drinking Guinness is a dimly lit Irish bar, you may not have noticed that Guinness is actually a dark ruby red. The rich color comes from roasted malted barley (which is a similar way coffee beans are roasted).

That small ball in your Guinness can beat out the internet for a technology award.

If you're an astute drinker, you may have wondered why there is a small, ping pong-like ball in the bottom of your can of Guinness. No, the manufacturers weren't playing beer pong when they sealed up your can. It's actually a Guinness widget that's working hard to replicate the draught experience in a can.

When a Guinness can is popped open, a small amount of beer and nitrogen, which is trapped in the widget, is forced out to create the famous creamy head that you'd expect if your Guinness was poured for you from a tap. The invention is actually very noteworthy: The widget won the Queen's Award for Technology in 1991… beating out the internet!

In 2017, Guinness confirmed that it changed up its filtration process, doing away with the use of isinglass, a byproduct of fish. Without it, the beer is now officially vegan-friendly. Cheers, vegans!

Looking for more helpful food tips? Sign up for our newsletter to get daily recipes and food news in your inbox!

More than 160,000 pints of Guinness are lost every year in facial hair.

Guinness commissioned a study in 2000, which found that an estimated 162,719 pints of Irish stout go to waste every year via facial hair.

According to scientists, .56 milliliters of Guinness is trapped in a beard or mustache with each sip. And it takes about 10 sips to finish a pint. An estimated 92,370 Guinness consumers every year in the U.K. have facial hair. Figuring they consume an average of 180 pints each a year, the total cost of wasted Guinness annually is about $536,000. So if you want to get the most of your Guinness, it's a good idea to shave.

Three of Guinness' five breweries are in Africa.

It wouldn't shock you to learn that Great Britain is where the most Guinness is consumed, but it might surprise you to know that two of the top five Guinness-consuming countries are Nigeria and Cameroon. That's because Guinness owns five breweries around the world, and they are in Ireland, Malaysia, Nigeria, Ghana, and Cameroon.

As Smithsonian Magazine explains, the reason Guinness is so big in Africa dates back to when the beer began being exported from Ireland to Barbados, Trinidad, and the British Colony of Sierra Leone in the early 1800s. Wherever the British Empire established colonies or stationed soldiers, Guinness shipped their beer. It wasn't long before Guinness developed partnerships with local breweries, who bottled the beer and still sell it to this day.

Pouring a Guinness beer is a six-step artform that involves a one-minute-59.5-second break.

The proper Guinness pouring process begins with a cool, dry glass. You want to hold the glass at a 45-degree angle beneath the tap's spout. Pull the handle forward and let the stout flow, filling it up until you reach .75 inches below the top of the glass. Let it settle for precisely 119.5 seconds. Bring the glass to a 45-degree angle again, but push the handle backward this time until the head is "just proud of the glass." Don't let it overflow, and "never use a spatula to level the head." That's just blasphemy!

An injured cavalry officer credited Guinness for his recovery.

Long before there was Yelp, there was this rave review from a cavalry officer injured at the 1815 Battle of Waterloo named Ethel M. Richardson. In his 1928 book, he wrote: "When I was sufficiently recovered to be permitted to take some nourishment, I felt the most extraordinary desire for a glass of Guinness." The doctor gave him a small glass of the stout, and Richardson wrote that it "contributed more than anything else to the renewal of my strength." No wonder the slogan was "Guinness is good for you" in the 1920s.

The Guinness Book of World Records was inspired by an argument in a pub.

Yes, Guinness, the beer is connected to Guinness, the world records. In 1951, the managing director of Dublin's Guinness brewery, Sir Hugh Beaver, had a pub argument about the fastest game bird in the U.K. The conversation prompted the idea of a reference book about all the "superlatives" debated in pubs. A few years later, the first Guinness Book of World Records was published in 1955.

The original Guinness brewery's lease runs out in the year 10,759.

In 1759, Guinness' founding father, Arthur Guinness, agreed to rent an unused brewery at St. James's Gate, signing a 9,000-year lease for four acres. The annual rent was £45, which is about $60 U.S. dollars.

Unfortunately, the lease was nullified after Guinness bought the property outright and expanded to a 50-acre brewery. But "don't worry, we're not planning on going anywhere," the Guinness website jokes. The original lease is still in the archives at the Guinness Storehouse in Dublin.

Guinness married an heiress named Olivia Whitmore, with whom he had 21 children. Ten of Guinness's offspring survived into adulthood. Guinness worked well into his seventies, supervising the Dublin brewery with the assistance of three of his sons. He died in 1803, but his legend obviously lives on. If you ask for an "Uncle Arthur" in Dublin, you'll get a perfectly poured pint of Guinness.

In the 1760s, Guinness started his business brewing ales, but porter piqued his interest in the 1770s after it was exported from London to Dublin. He decided to give it a try, and the rest, as they say, is history. By 1799, Guinness decided to stop brewing ales and concentrate on porters.

The "Black Velvet" was invented by a mourning bartender. 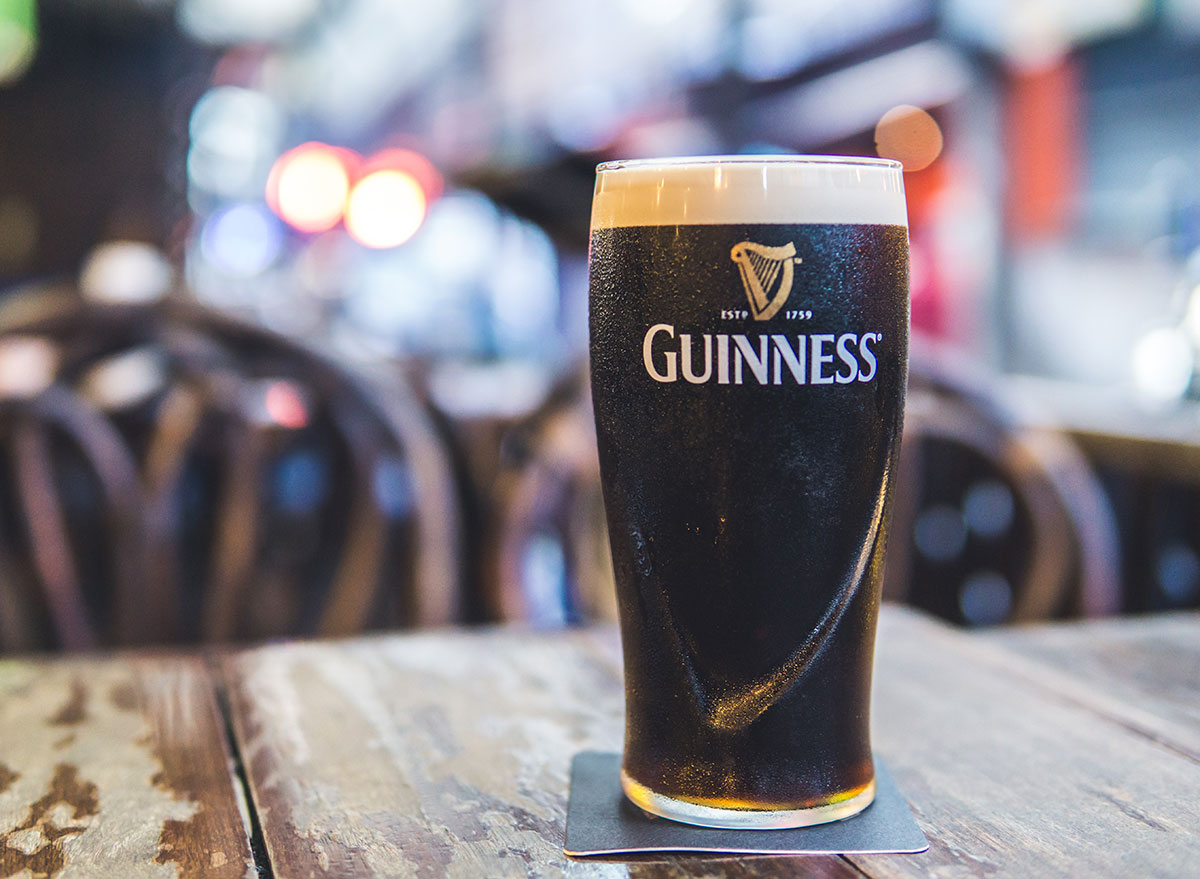 The Guinness-champagne combination known as "Black Velvet" was created in 1861 when London was brought to a standstill due to the death of Albert, the Prince Consort of Queen Victoria. Legend has it a bar steward at Brook's Club at the time came up with the mixture, explaining that even a glass of bubbly should be in mourning and dressed in black.

The Irish government had to alter the trademark of its coat of arms because of Guinness.

Guinness first used the ancient Irish harp symbol in its branding in 1862 when the buff oval bottle label was introduced. Nearly 200 years later, in 1984, Ireland's office of the attorney general recommended trademarking the harp, which is the country's coat of arms.

He wanted to trademark the harp facing in both directions for maximum protection against image theft. But the government feared Guinness could challenge the decision since the company had been using a right-facing harp symbol for at least 50 years before Ireland was even established. Instead, they decided to only register the left-facing harp as the trademark.

Guinness created—and then canceled—its own holiday.

In 2009, Guinness created "Arthur's Day" to celebrate the beer's founding father and to promote the 250th anniversary of the storied stout. The brewing company asked those celebrating to raise a glass at 17:59 (aka 5:59 p.m.), the year the beer was born. The holiday was celebrated for five years, up until 2013 when the company canceled the celebration.

The Guinness Storehouse was the first skyscraper in the British Isles.

The Guinness Storehouse, which was erected in 1904, was the first skyscraper building in the British Isles. The seven-story tourist hot spot is built around a giant pint. If that massive glass was filled, it would contain 14.3 million standard pints of Guinness. Just imagine how long that would take to pour if you were following Guinness's high standards!