17 Foods You Should Never Buy at Wegmans

In many ways, Wegmans is a shopper's paradise. There's a coffee bar to nab a latte, an extensive hot bar that features a burger station, and plenty of delicious fresh-baked goods. But not everything at Wegmans is healthy, or even reasonably priced. While we love plenty of foods from the grocery chain, some products are better left on the shelf.

Here are some of the foods you should never buy at Wegmans. Don't say we didn't warn you.

And the next time you're shopping, steer clear of these 17 Worst Foods to Buy at Target, too. 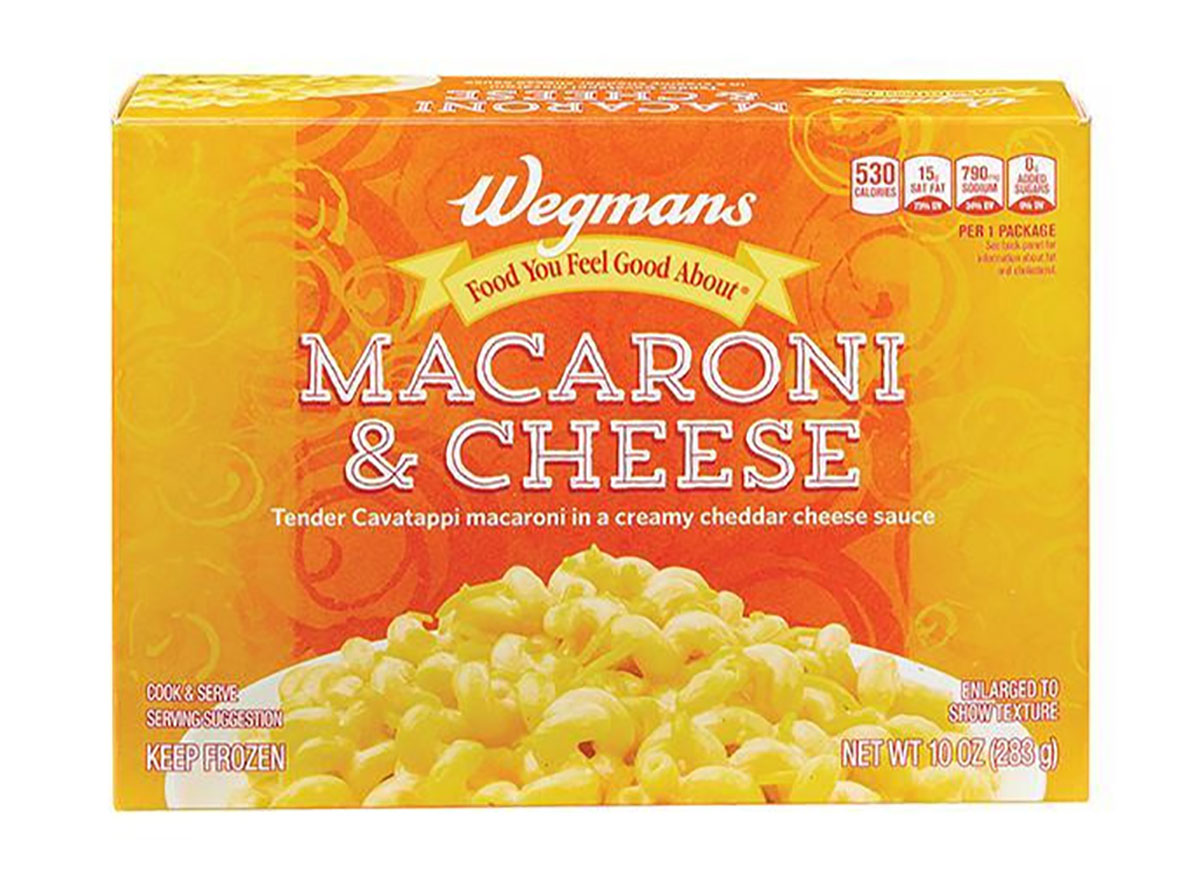 For a healthier alternative, try one of these 18 Amazing Mac-and-Cheese Recipes for Weight Loss.

Headed to the Wegmans hot bar? Don't make the mistake of thinking the vegetable lo mein is a healthy choice. One serving has a whopping 1,910 milligrams of sodium. That's more than the sodium content of a Big Mac!

Yes, it's nice to have a grocery store with an in-house bakery. But many of the fresh desserts from Wegmans are loaded with sugar. Each serving of this frosted brownie pan has 18 grams of added sugar. Yikes!

Instead of buying premade brownies, try one of our 76 Healthy Dessert Recipes. 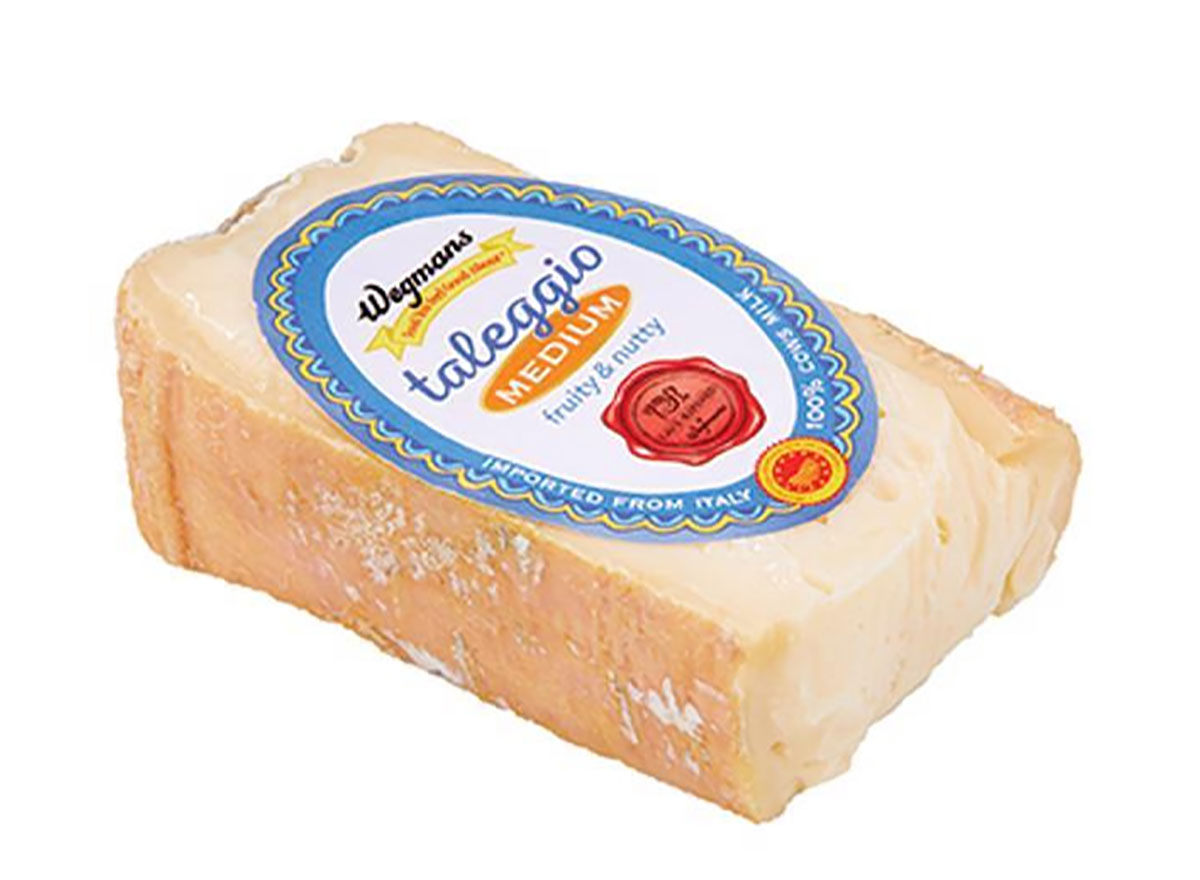 Wegmans is known for its cave-ripened cheese. But not all cheese is created equal! The store's taleggio cheese has 240 milligrams of sodium per serving, which is a lot more than many of the other cheese varieties. (And let's face it: Who's really only eating a one-ounce serving of cheese?) 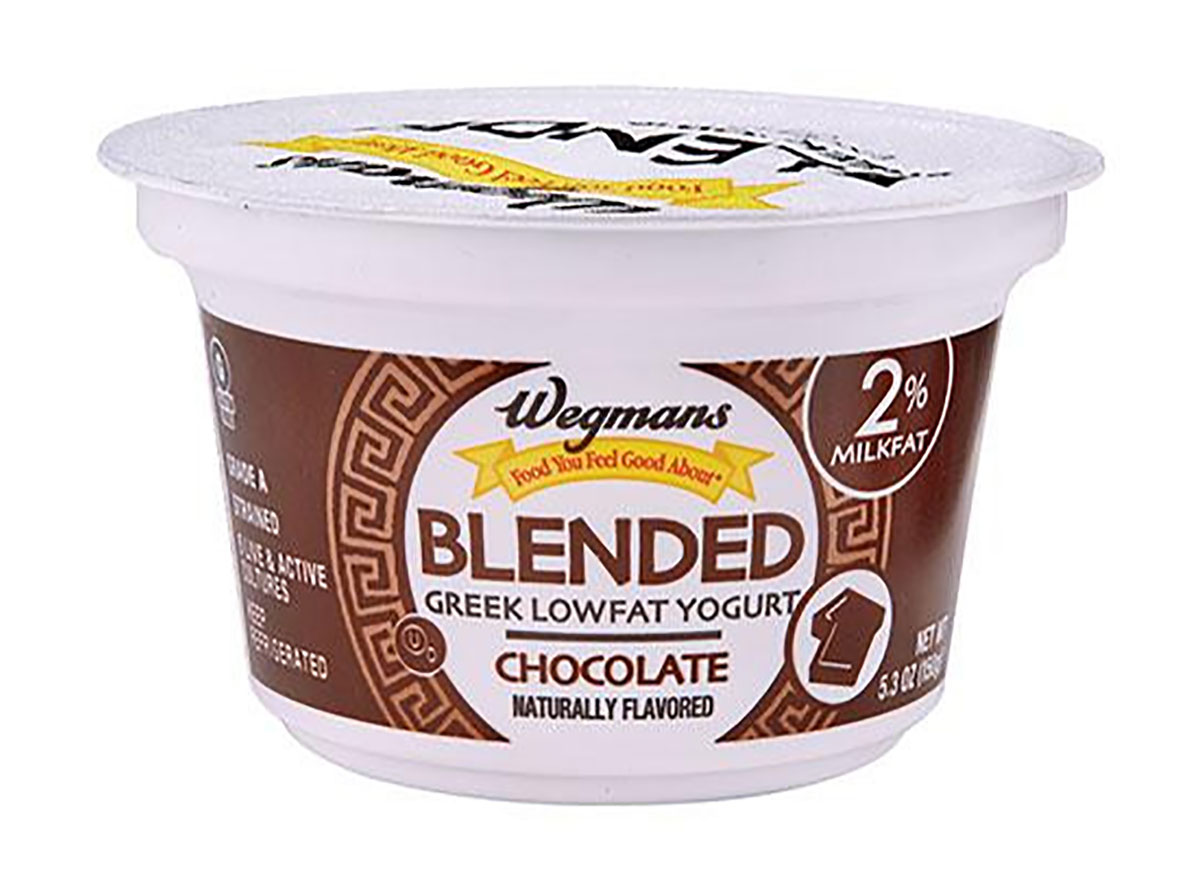 With 14 grams of added sugar, this yogurt is more of a dessert than a healthy snack. And if you top it with granola, you'll have even more added sugar in the mix. Stick to plain yogurt to keep your sugar intake in check. 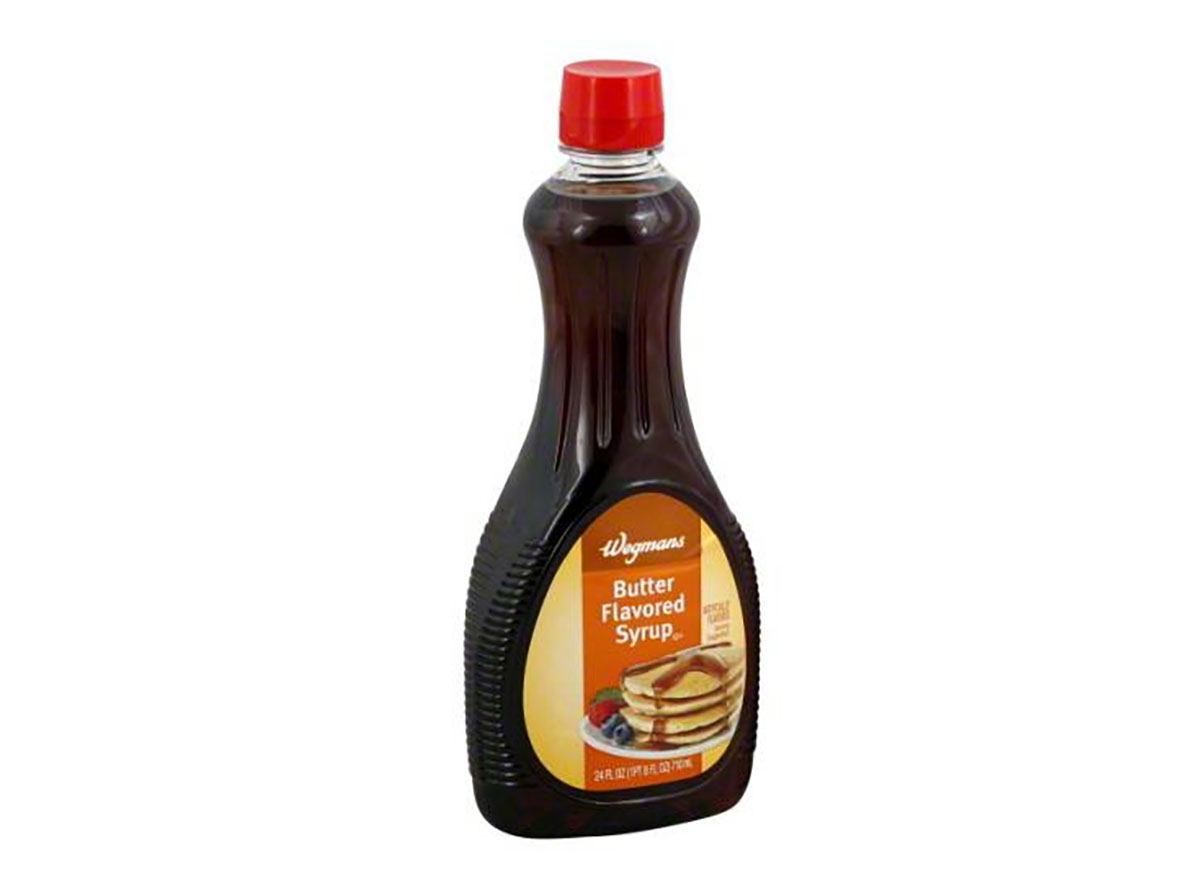 Wegmans' pure maple syrup is more expensive than this butter-flavored option, but it's worth every penny. The first two ingredients on the list for this option are corn syrup and high-fructose corn syrup. 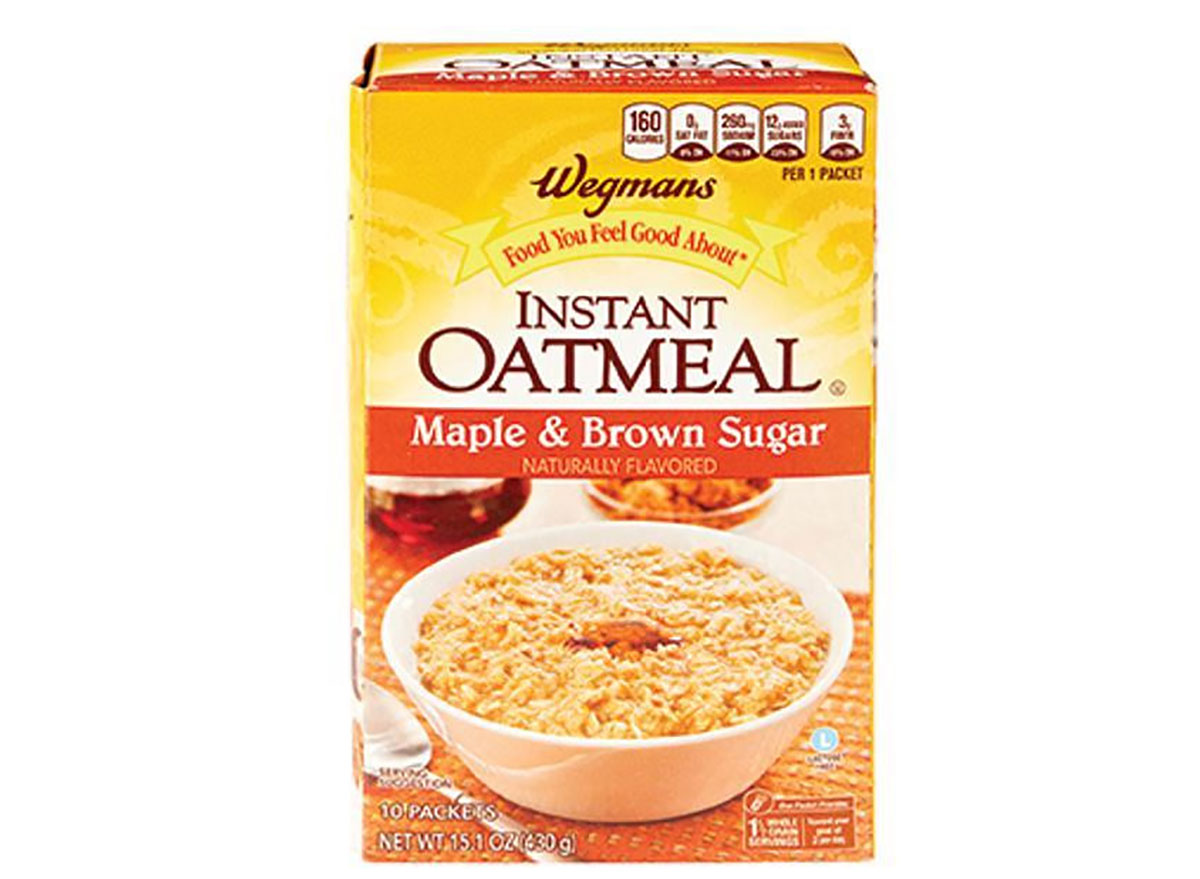 It's no secret that instant oatmeal is often loaded with added sugar if you buy the flavored options. Try buying plain oats and adding a drizzle of fresh maple syrup instead. 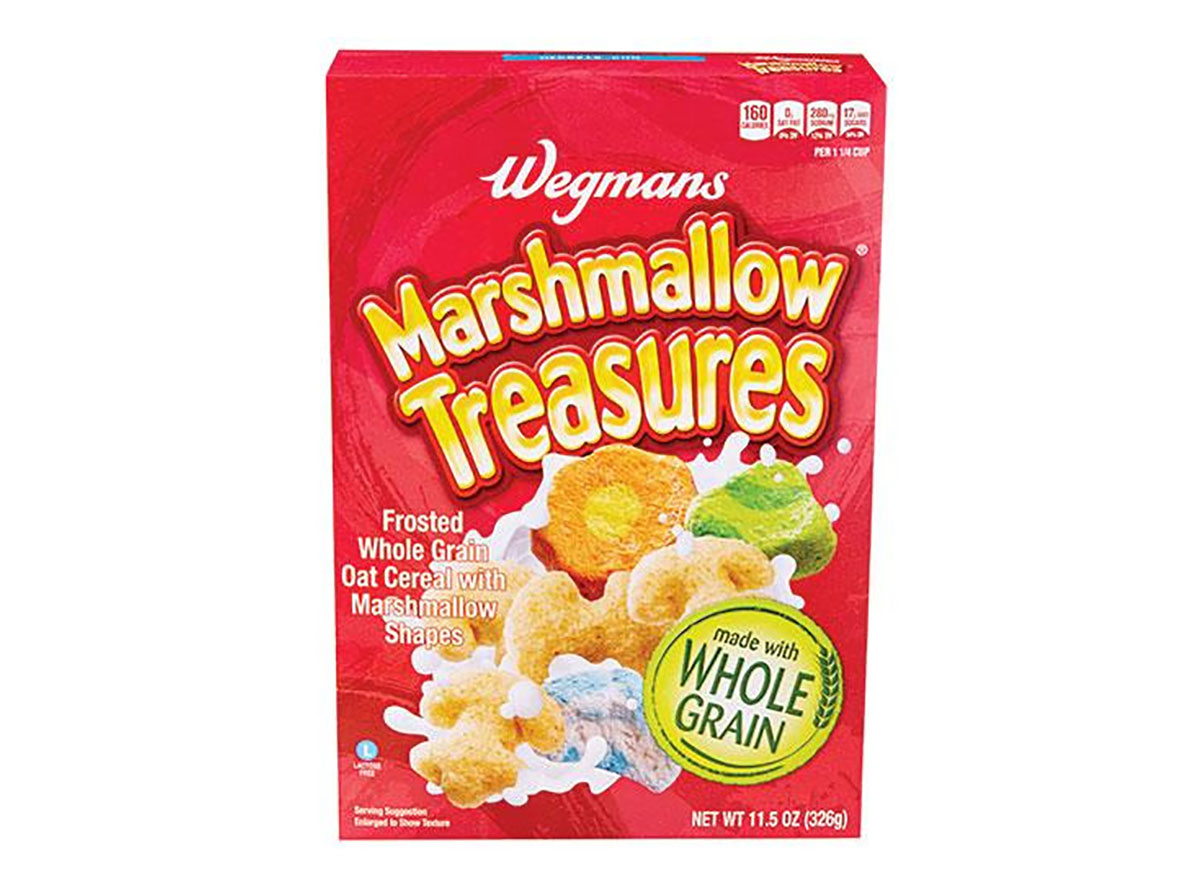 Many children's cereals are loaded with sugar, and Wegmans' take on Lucky Charms is no exception. Each serving of this cereal contains 17 grams of added sugar—not exactly a breakfast of champions. 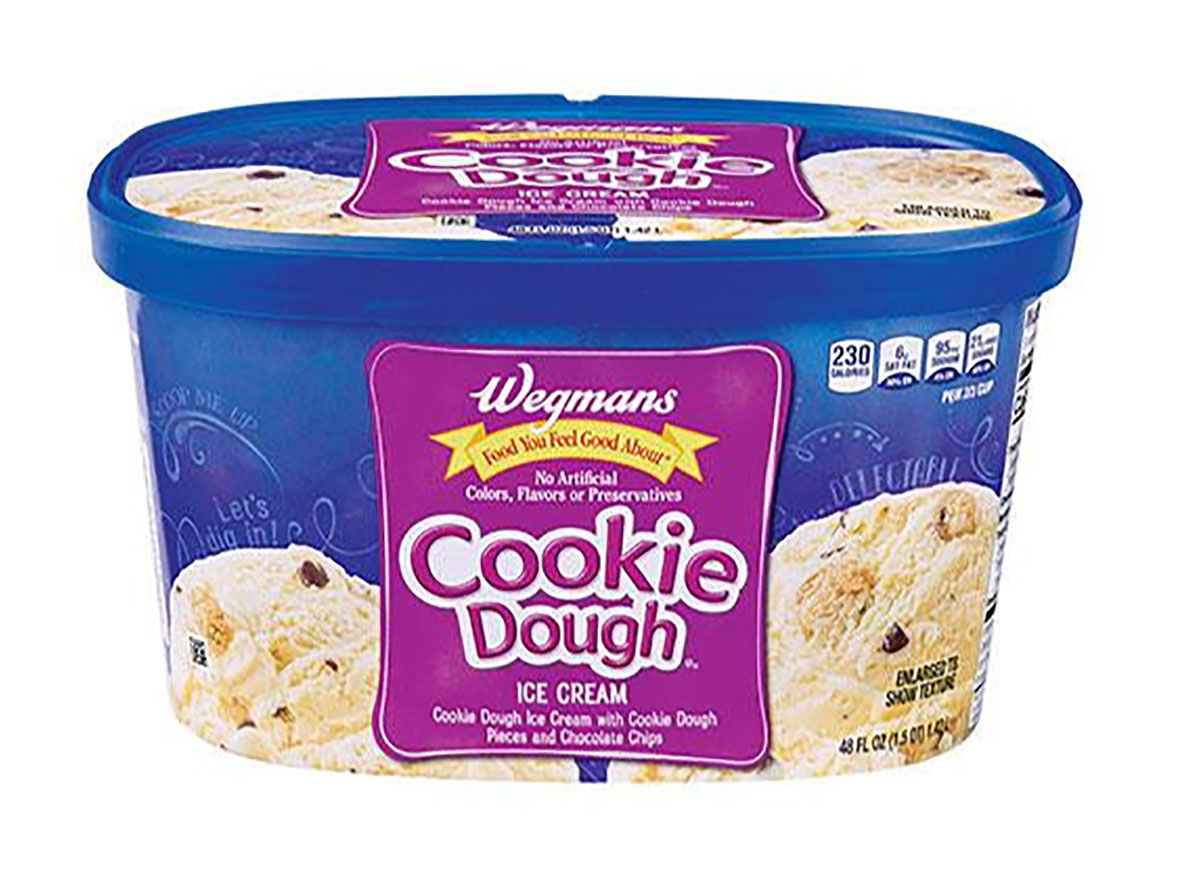 Yes, cookie dough is a classic ice cream flavor. But this variety has more added sugar than Wegmans' other house-brand ice cream offerings, with 21 grams of the stuff in each 2/3 cup serving. 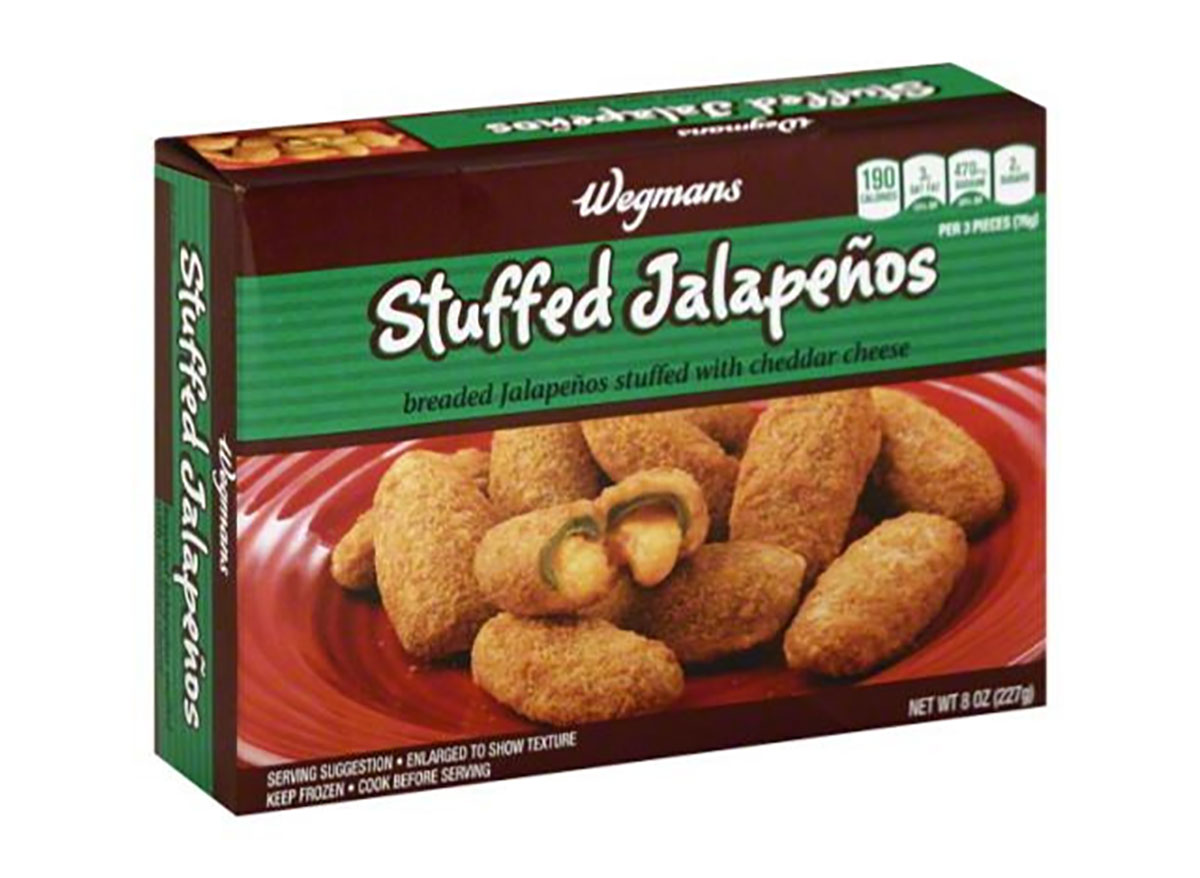 Like so many frozen appetizers, these stuffed jalapeños are a sodium bomb. They contain 470 milligrams of sodium in just three pieces—more than twice the amount you'd find in a small order of Wendy's fries.

For a healthier alternative, try our recipe for Stuffed Jalapeños. 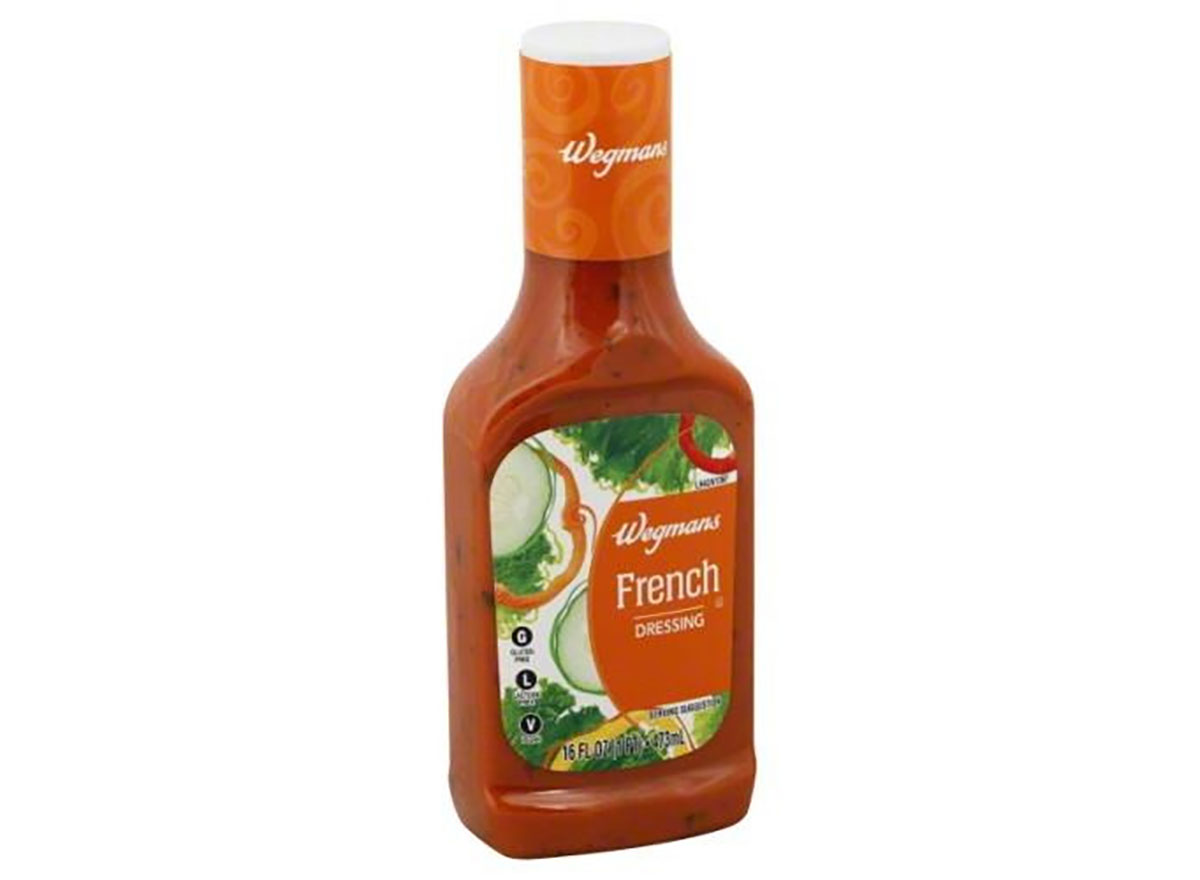 Do you really want to drizzle 290 milligrams of sodium atop your salad? Making homemade dressing, or even just using oil and vinegar, is a simple way to keep those veggies healthy.

Skip the packaged stuff and try one of our 10 Healthy Salad Dressing Recipes to Make. 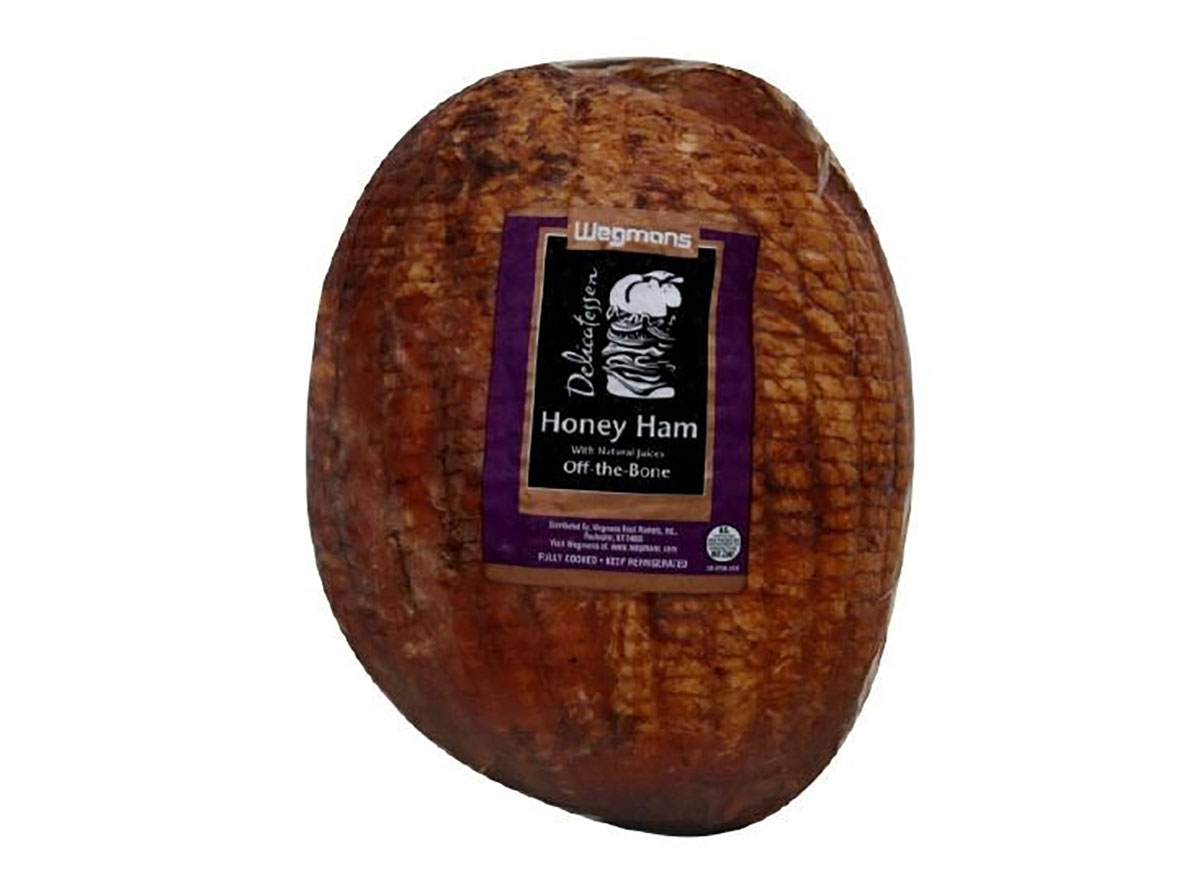 Deli meat has a reputation for being jam-packed with sodium, and this Wegmans offering is no exception. Try swapping ham for the store's oven-roasted turkey for a less salty sandwich. 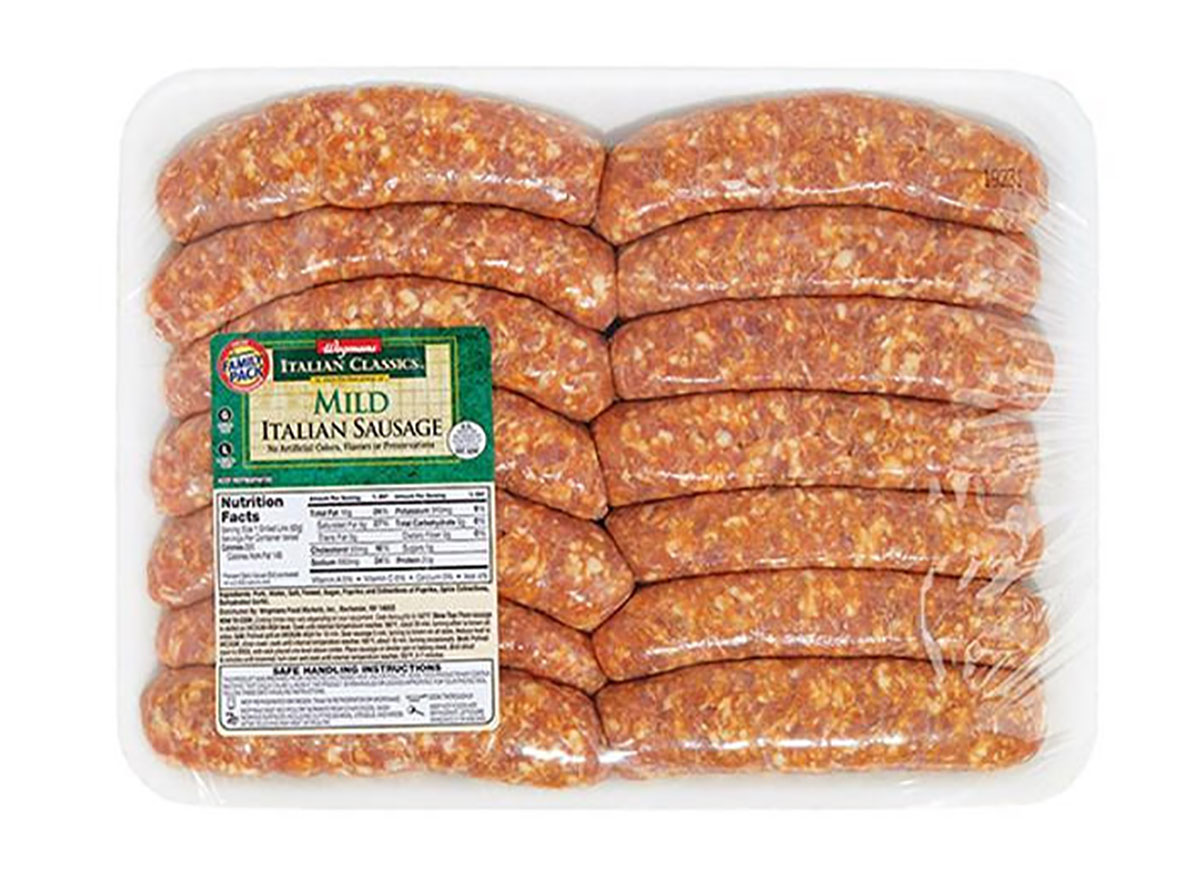 With 590 milligrams of sodium in each sausage link, this is a food you should only enjoy once in a while, if ever. 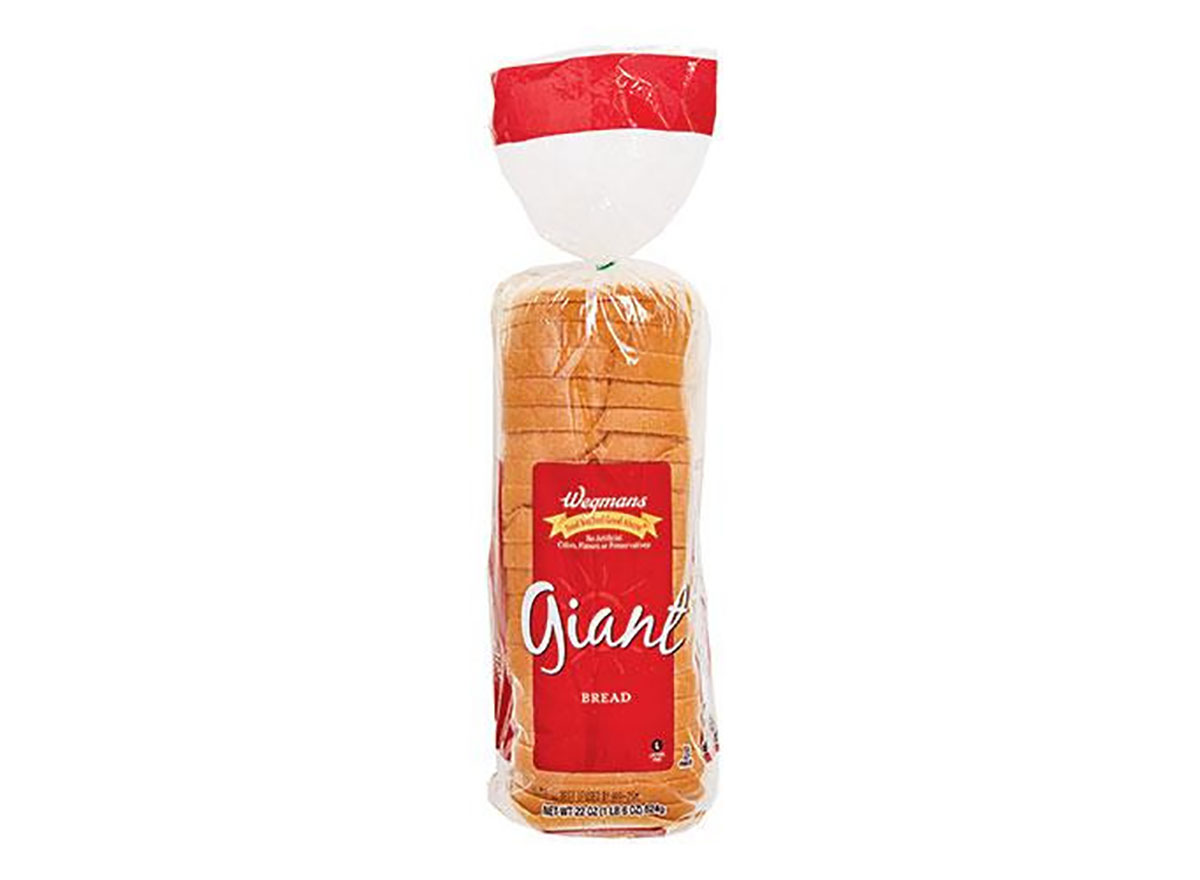 Do you really want to blow 17% of your daily recommended sodium intake on a serving of plain white bread? Yeah, we didn't think so. 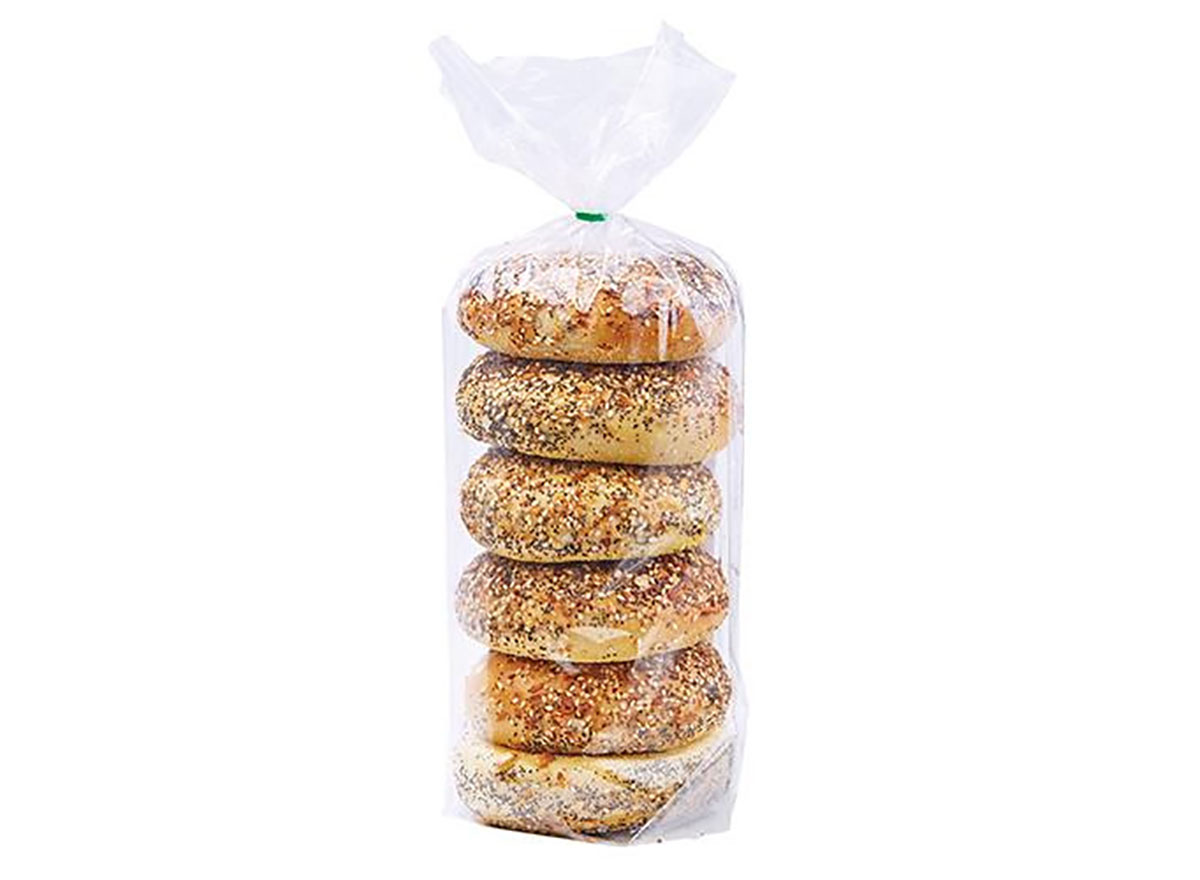 Bagels are not a healthy way to start your day, and these Wegmans bagels are no exception. With 54 grams of carbs in each bagel, you're starting your day with what's basically an empty carb bomb. No, thank you. 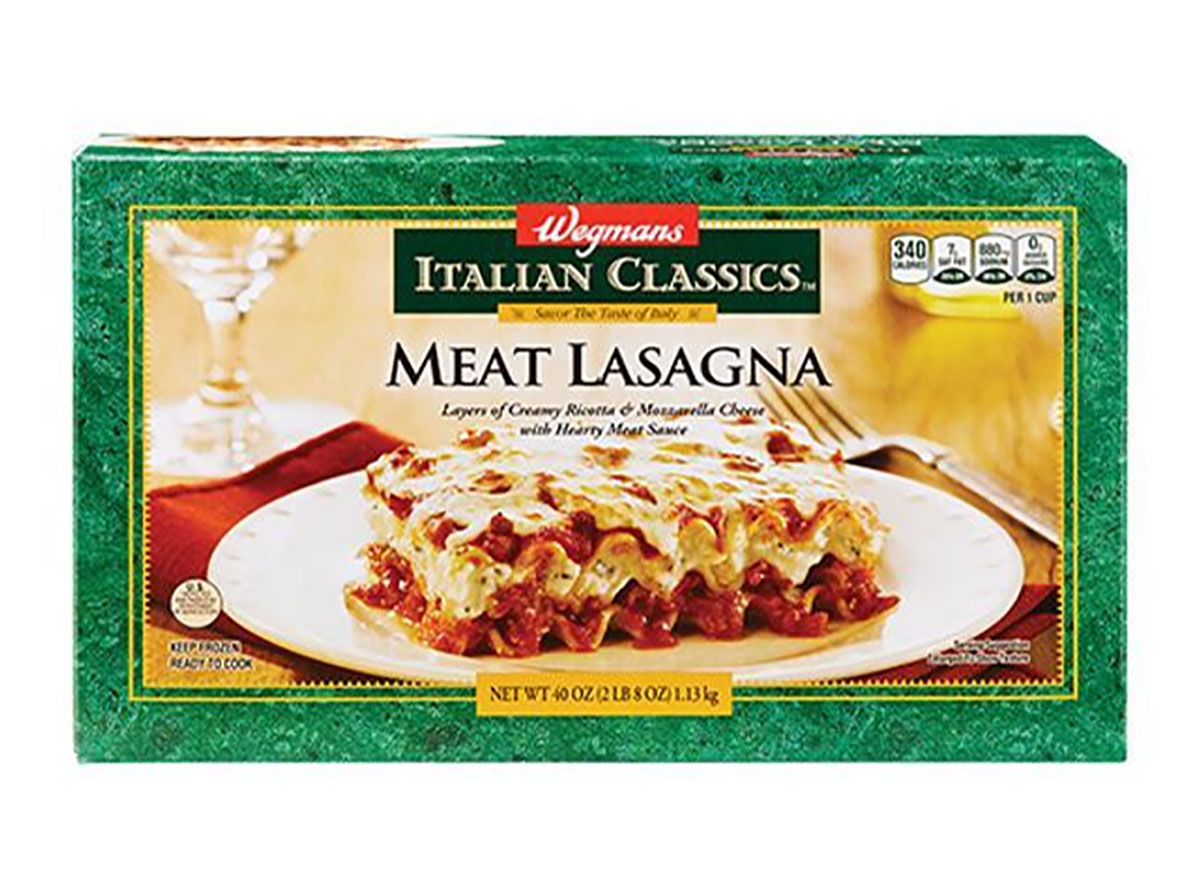 Like so many frozen dinners, this lasagna is absolutely loaded with sodium. As in, it has 880 milligrams of the stuff per serving. Yikes! 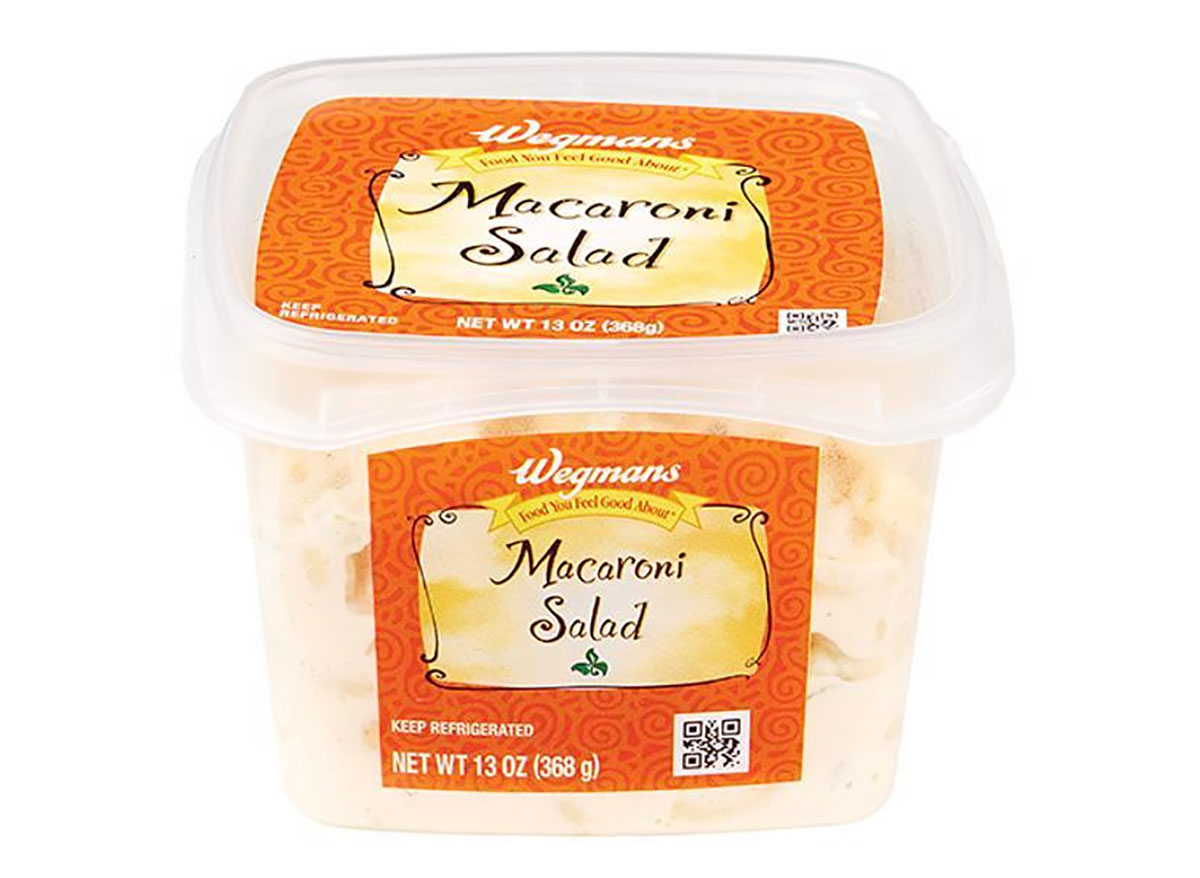 Bring this side dish to your next cookout, and you'll be serving your family a hefty dose of sodium and fat alongside their burgers. Stick to homemade pasta salad—or better yet, regular salad—instead.

Eat This, Not That!
Inspired by The New York Times best-selling book series, Eat This, Not That! is a brand that's comprised of an award-winning team of journalists and board-certified experts, doctors, nutritionists, chefs, personal trainers, and dietitians who work together to bring you accurate, timely, informative, and actionable content on food, nutrition, dieting, weight loss, health, wellness, and more. Read more about Eat This
Filed Under
Groceries // Grocery Shopping // Grocery Stores // Tips