The 22 Best and Worst Products from Entenmann's

Entenmann's store-bought goods have been sweetening up the lives of Americans for over 100 years. Everyone's got a favorite—but is yours an Eat This or a Not That?

Between their donuts, crumb cakes, and cookies, Entenmann's covers nearly every item on your baked goods checklist. Hosting a brunch for your new neighbors? Pick up an Entenmann's twisted danish. Promised you'd bring snacks for your kid's bake sale? Grab a box of cookies. But before you get lost in your childhood memories of sneaking the crumb topping off the coffee cake, we here at ETNT are here to offer you a blunt reality check: Entenmann's products aren't remotely healthy and certainly aren't fresh.

Although the company began with truly fresh-baked goods that were delivered daily in a horse-drawn wagon by William Entenmann himself, the products you see on shelves today are far from that idyllic image. In fact, the holding company of Entenmann's—Bimbo Bakeries—was sued in 2013 for their misleading labelling: while the label indicates that Entenmann's bakery goods are "made fresh daily", they're not, and "the products contain preservatives that belie any claim that they are 'fresh,'" according to the suit. The lawsuit added, "the package has a highly visible sell-by date, which indicates the product is not intended to sit 'fresh' on the shelf for one day."

The suit may have been dismissed, but we have to agree with the plaintiff: You shouldn't be fooled into equating preservative- and additive-laden Entenmann's products with the made-from-scratch baked goods right out of your oven. That being said, there are some Entenmann's products that will do less damage to your waistline than others.

So without further ado, allow us to provide you with affirmation for your favorite indulgences or open your eyes to possibly trying other options. And while you're at it, you should also consider tossing these 50 Unhealthiest Foods On The Planet out of your pantry. 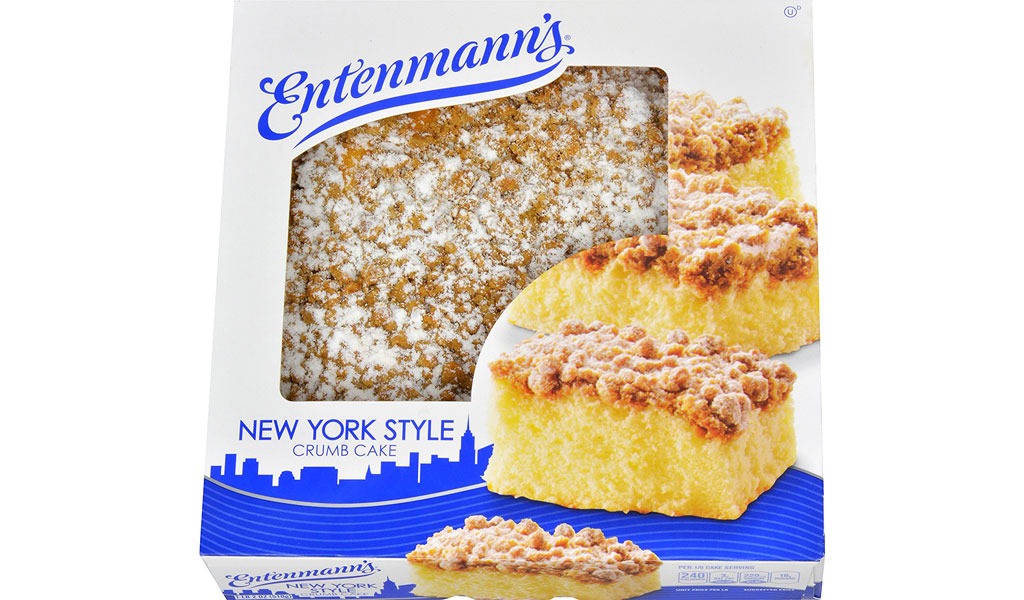 In terms of ingredients, every Entenmann's crumb cake (as well as nearly every product the bakery offers) is a disaster. Made from white flour bleached by chemicals, inflammatory vegetable oils, fatty-liver-inducing high fructose corn syrup, artificial flavors and colors (the list of Awful Ingredients Everyone Still Uses—But Shouldnt goes on), we'd bet this recipe is far from what William Entenmann originally came up with in 1898.

That being said, unless you're pulling out a crumb cake every morning to eat alongside your coffee, you don't have to feel guilty about cutting yourself a piece of this crumb-heavy New York Style Crumb Cake if it's sitting next to our "Not That!" pick. It's lower in calories, fat, and saturated fat than the pick below.

Not That!: Cinnamon Crumb Cake 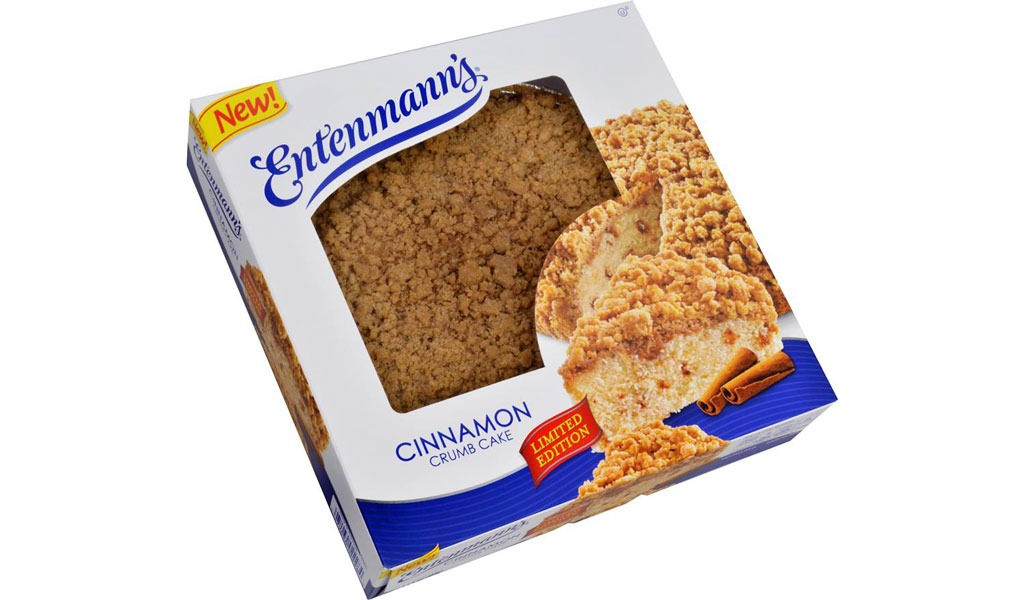 Sorry, adding antioxidant-rich cinnamon isn't going to magically make this Cinnamon Crumb Cake any better for you. As we mentioned before, it's higher where it hurts—calories, fat, and saturated fat—than your previous option but for the same size. Craving the cinnamon? Sprinkle it on yourself! 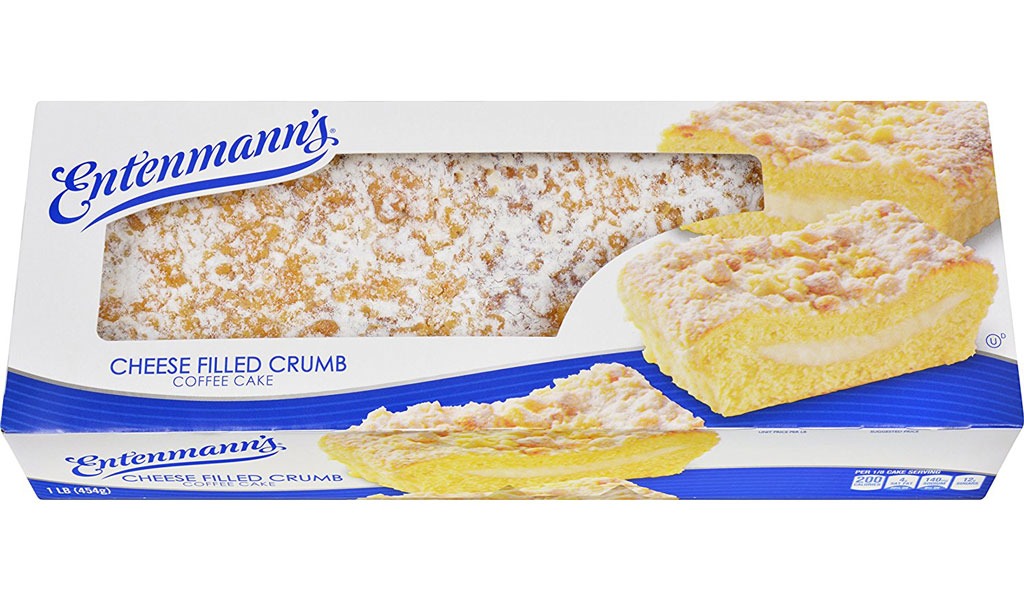 Although the New York-style crumb cake came out top of its class in terms of classics, Entenmann's does several plays on the company's famous coffee cake. In terms of fillings, we'd recommend going with the Cheese-filled coffee cake. Yes, it's a bit higher in calories and fat, but these will actually help dim your sugar cravings, making you feel fuller so you don't overdo it on the sweet side. You can feel comforted knowing these are healthy fats from the addition of nuts and coconut.

Not That: Bavarian Creme Coffee Cake 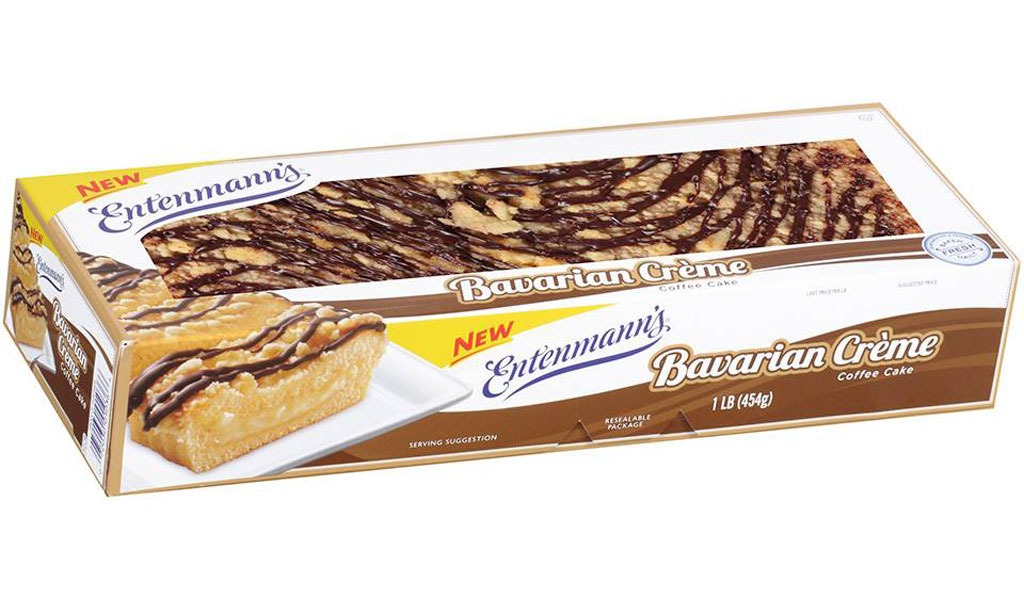 It's higher in sugar and lower in protein than our recommended option because of the gum-thickened Bavarian Creme filling and extra chocolate string icing drizzled on top. 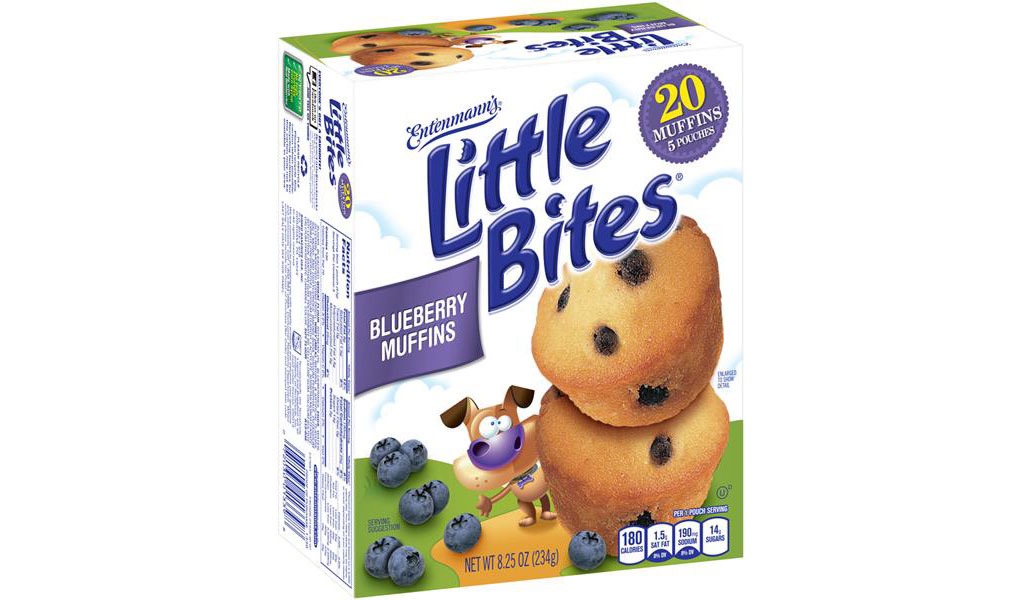 Loyal fans were furious when Entenmann's downsized their Little Bites bags from five treats to three. The bakery finally responded by adding one muffin back into the mix. If you're going to be eating an extra muffin, make sure you grab a bag of the Blueberry Muffins over the Fudge Brownies. These blueberry Little Bites have nearly ten fewer grams of sugar.

Not That!: Little Bites Fudge Brownies 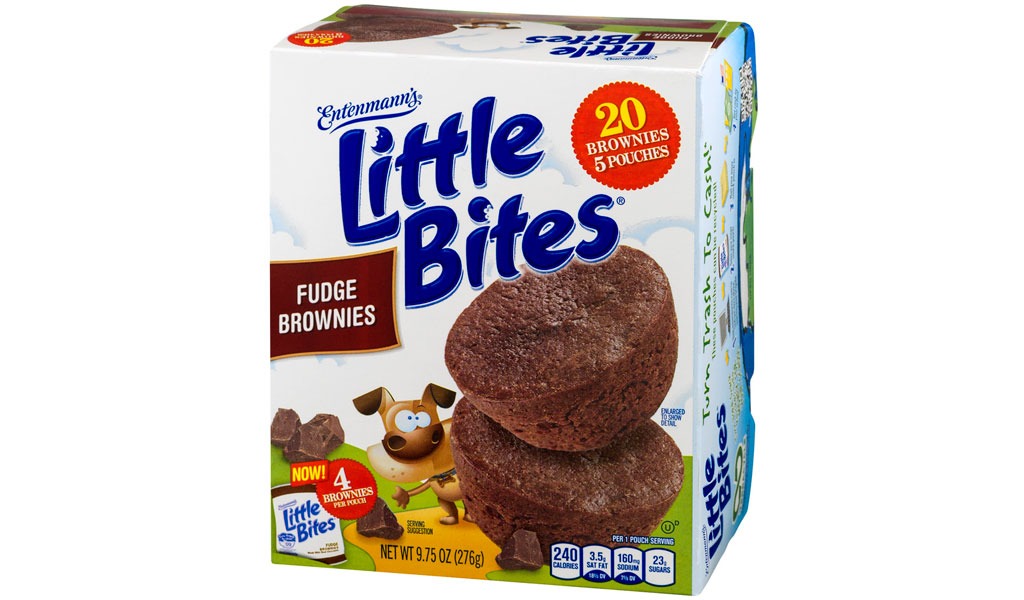 Scarfing down a whole bag of brownie Little Bites will set you or your child back half a day's worth of sugar. 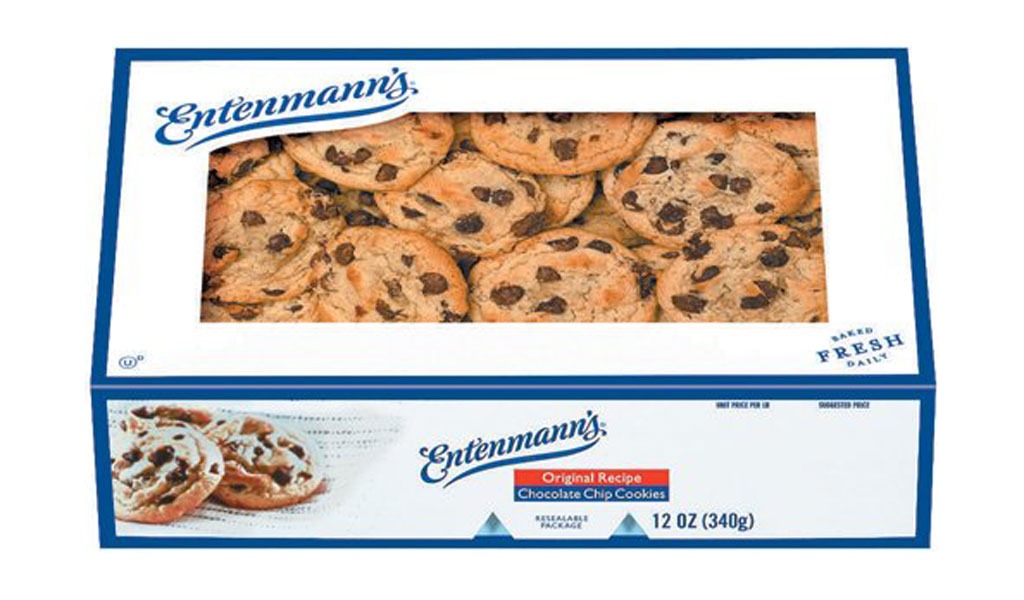 These two-bite cookies are perfect for those who prefer chewy—over crunchy—cookies. This original recipe is what you should look to when grabbing a box off the shelf. 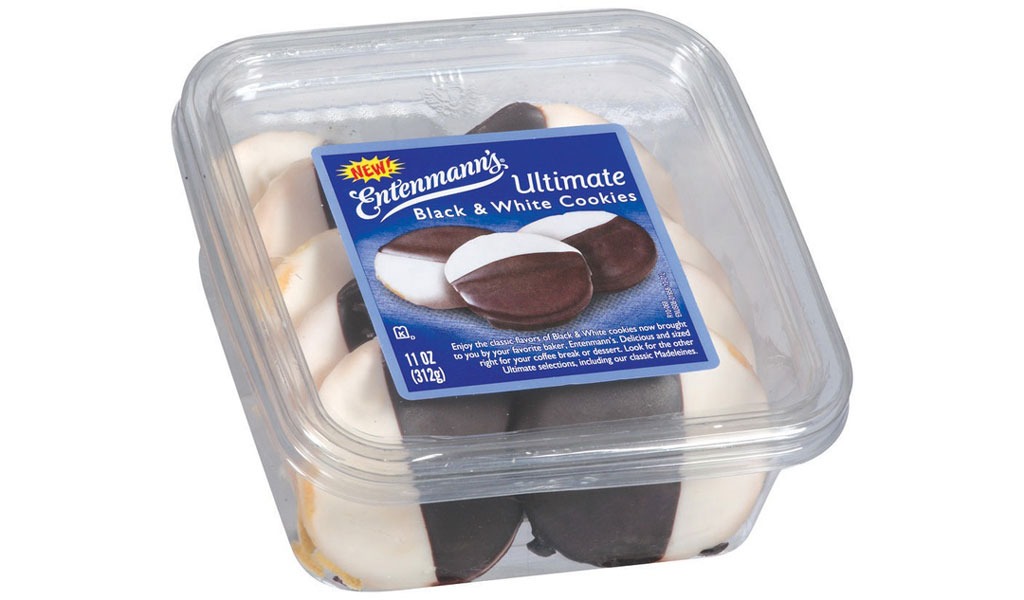 For just about the same nutritionals, you can only eat one Ultimate Black & White cookie to three Chocolate Chip Cookies. Research has shown that one of the main influencers of satiety is volumetrics. Studies have shown that if the nutritional stats of two foods are identical, you're more likely to report feeling fuller after consuming the food you can eat more of. And in this case, it's the chocolate chip cookies. Look for more eating tips to boost your satiety? Here are 26 Ways to Feel Full While Eating Less. 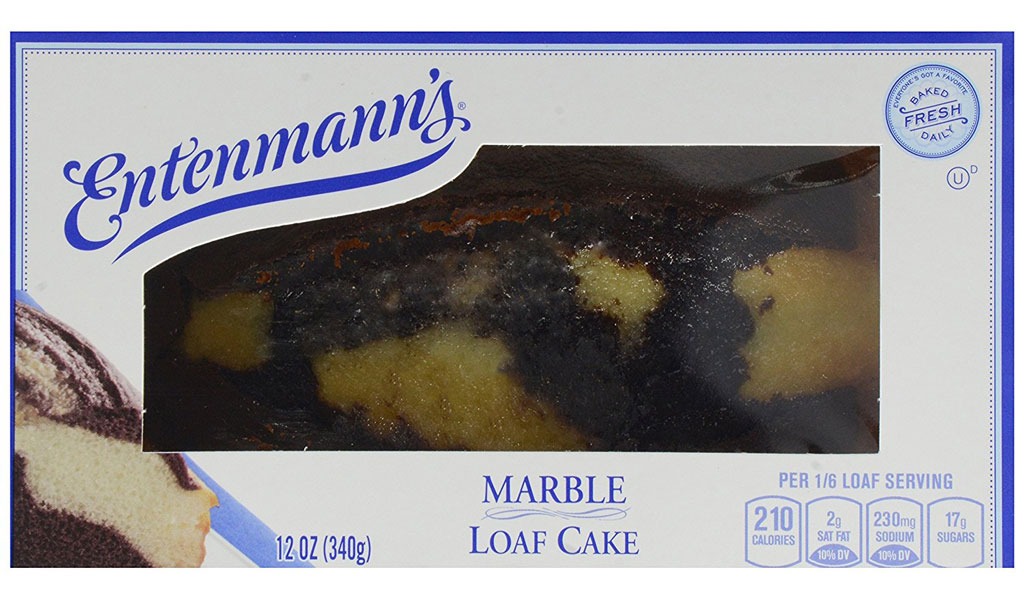 Layering on some fresh strawberries and topping it off with whipped cream: an Entenmann's loaf cake puts the "semi" in semi-homemade desserts. This classic loaf cake is the best of both worlds: chocolate and vanilla.

Not That!: Cinnamon Crunch Loaf Cake 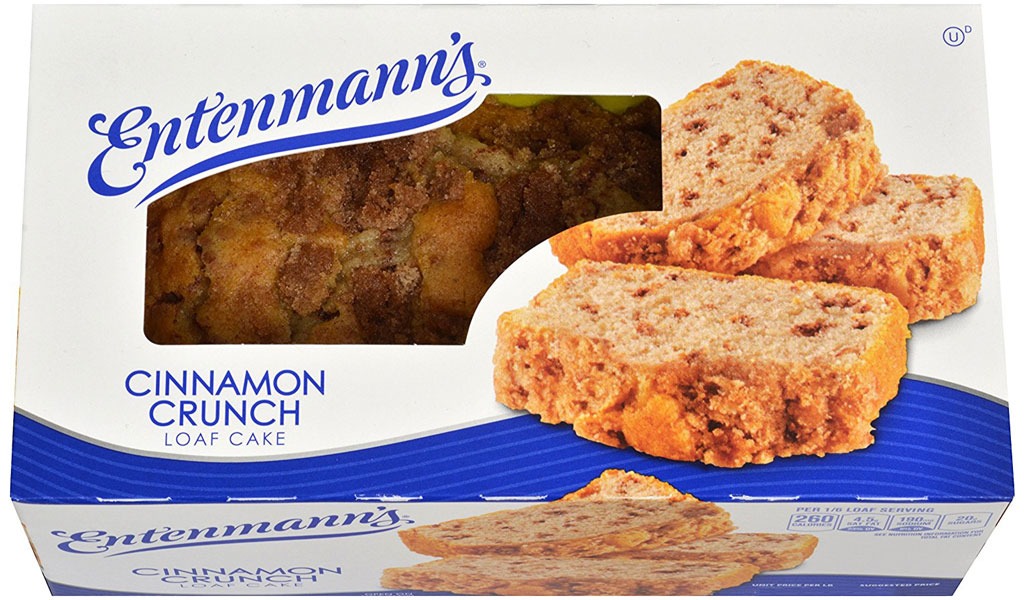 For a smaller portion of the same sized cake, you're consuming nearly 100 more calories, double the fat, and six extra grams of sugar if you grab a slice of the Cinnamon Crunch loaf cake over the Marble. 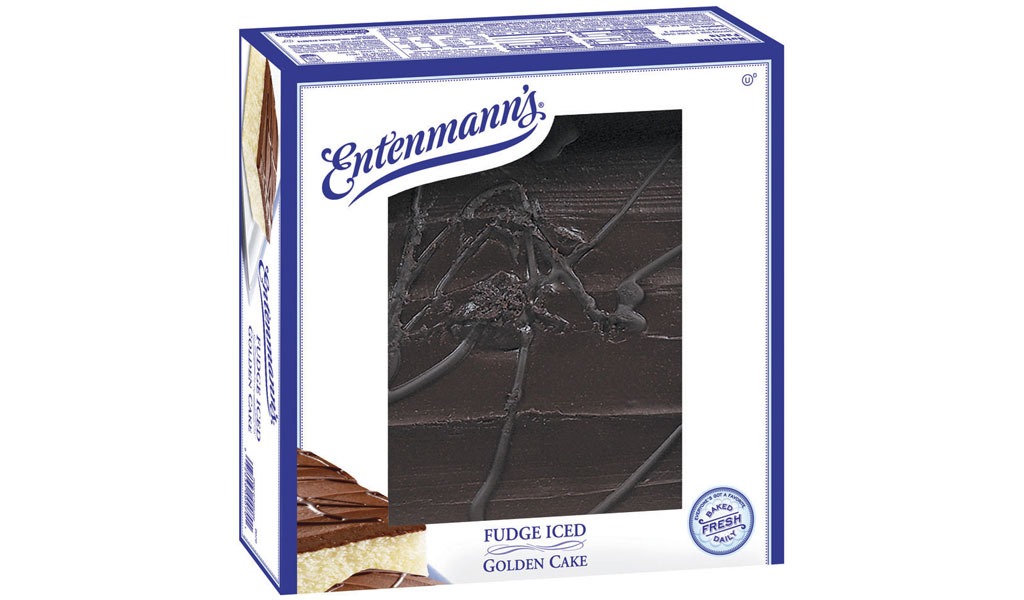 Sure it might be odd that you can peel the entire icing layer off with one swipe, but any doubts disappear with your first bite of buttery cake and rich fudge topping.

Not That!: Louisiana Crunch Cake 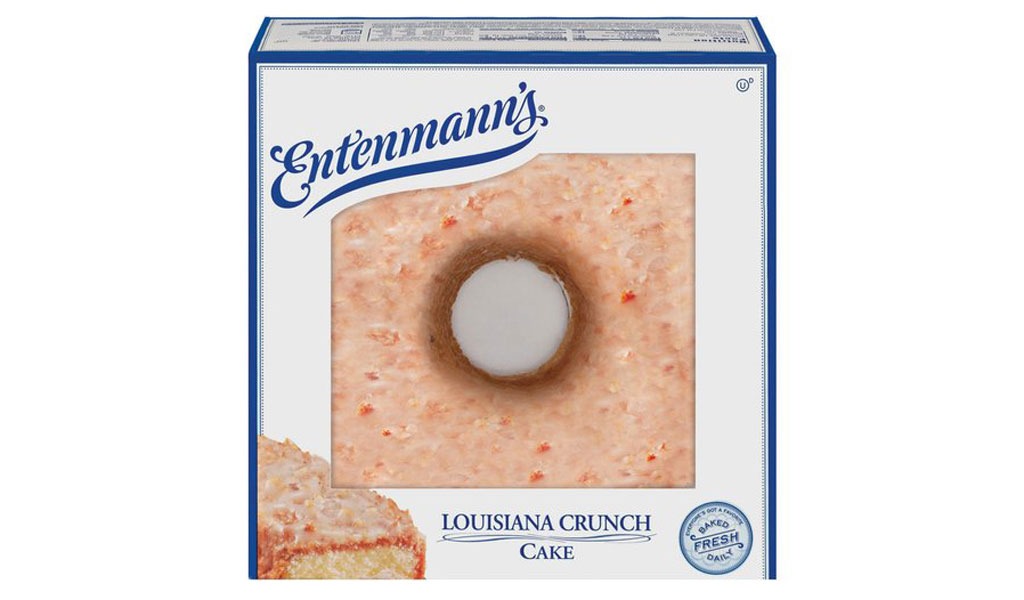 This "Louisiana-inspired" yellow cake topped with a "crunchy, nutty sensation and a decadent coconut glaze" is just a flat-belly disaster. The almond-scented cake boasts the highest calorie, fat, and sugar counts of any product Entenmann's offers. 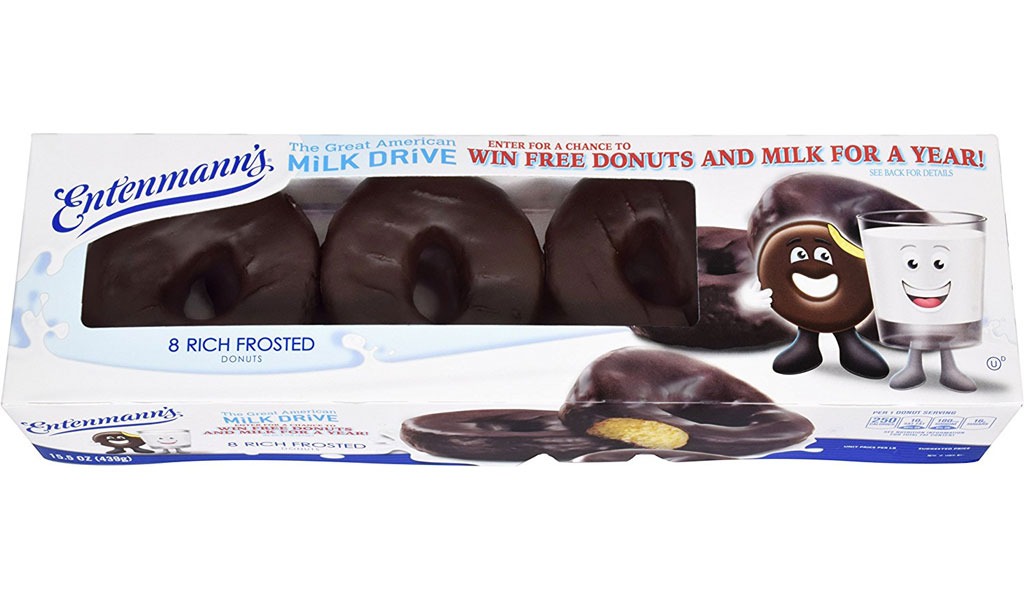 If you're looking to get a chocolatey, waxy coated donut, we'd suggest sticking with the classic rich frosted donut. Just make sure to stick to just one.

Not That!: Frosted Devil's Food Donuts 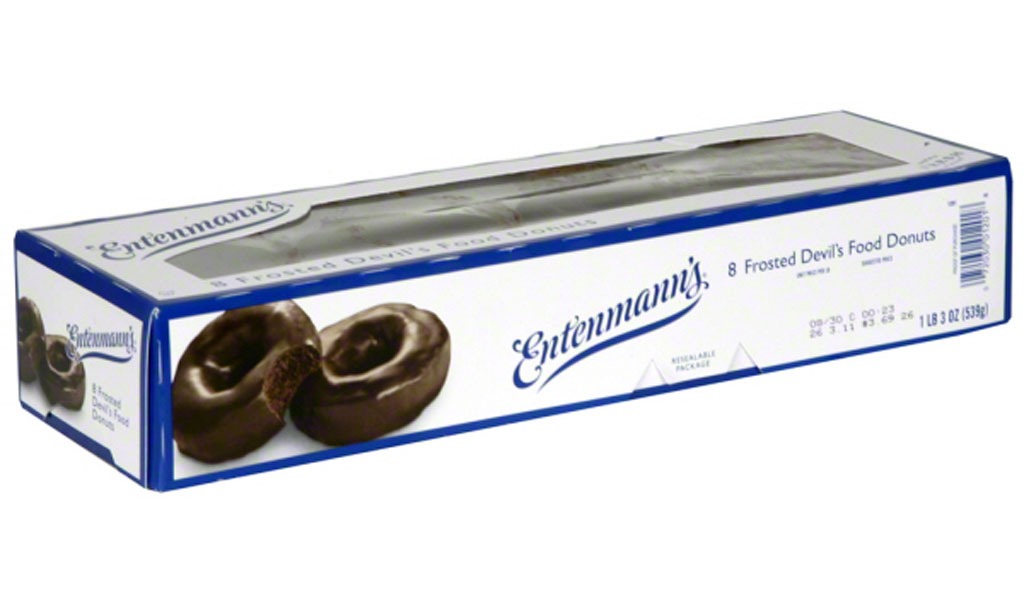 Pick your poison. Grabbing a chocolate-on-chocolate treat like the Frosted Devil's Food will set you back half a day's worth of sugar while going with the Softee frosted version means you'll consume over 60 percent of your day's worth of saturated fats. 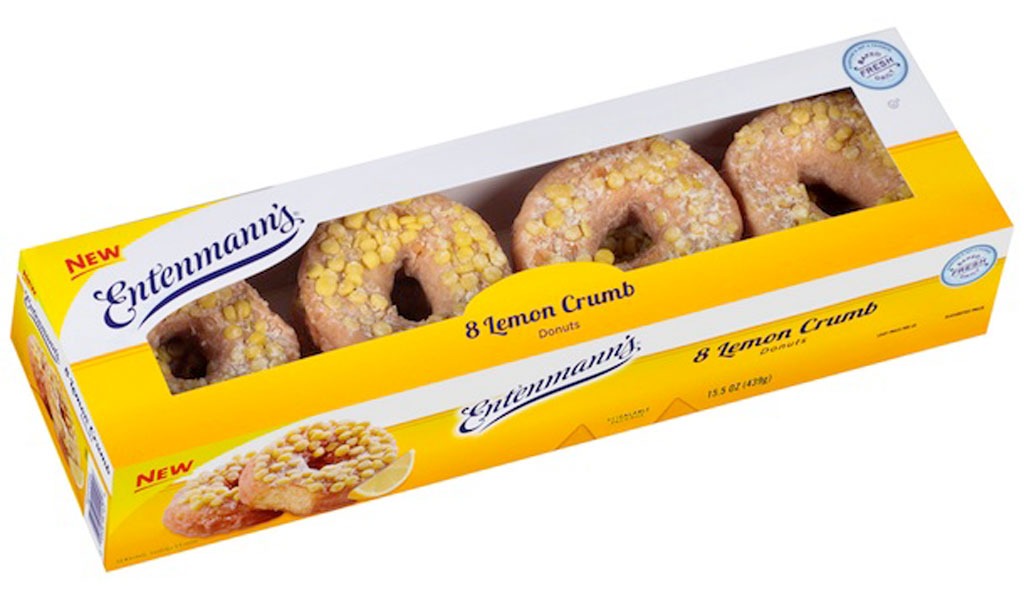 Although the crumb topping looks like someone cut off dozens of erasers off No. 2 pencils and threw them on a donut, we'd much rather see you noshing on the lemon version. Here's a tip: if there's a lemon flavor, you're usually better off with that choice. Why? Manufacturers know we're expecting a certain tartness, so they lay off the added sugar.

Not That!: Crumb Donuts 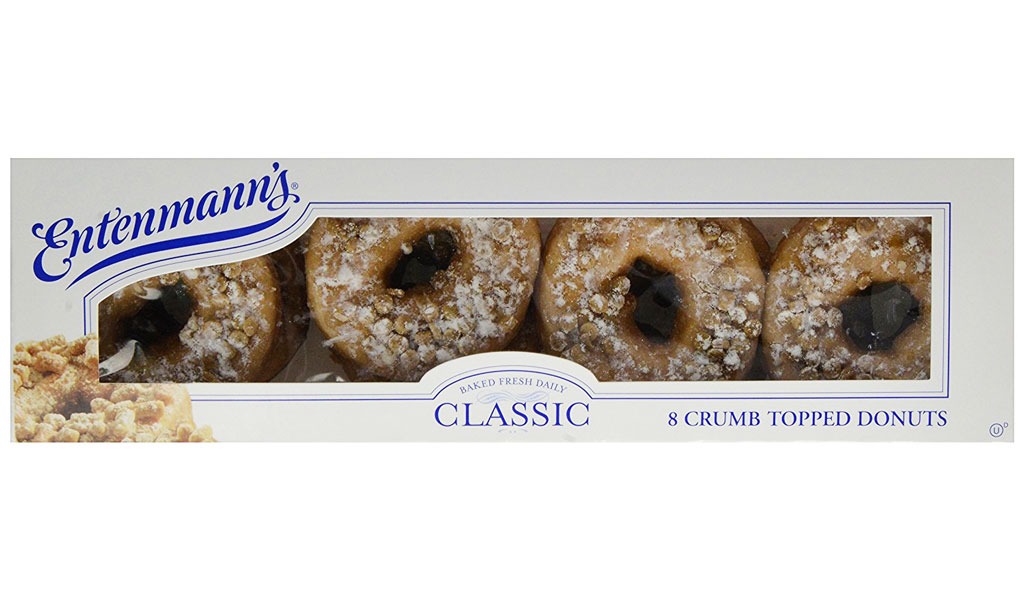 There are marginal nutritional differences between the original crumb donuts and the lemon option, but if you know you like eating more than one, those differences will sure add up. This original flavor is higher in calories, fat, saturated fat, and sugar than our Eat This! pick. 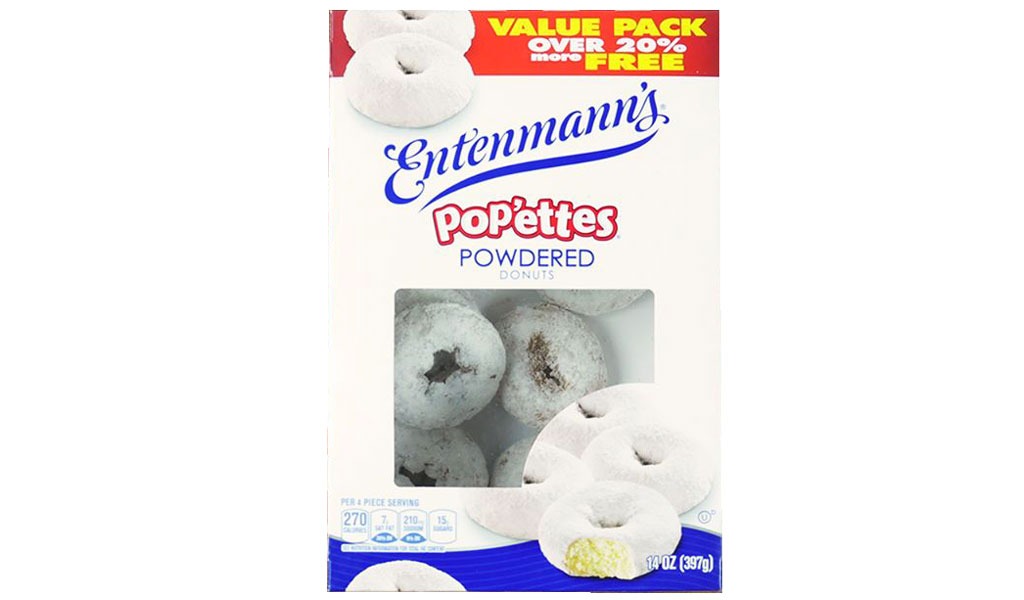 Despite knowing you're about to make a mess, these mini powdered donuts are worth it.

Not That!: Chocolate Frosted Pop'ems 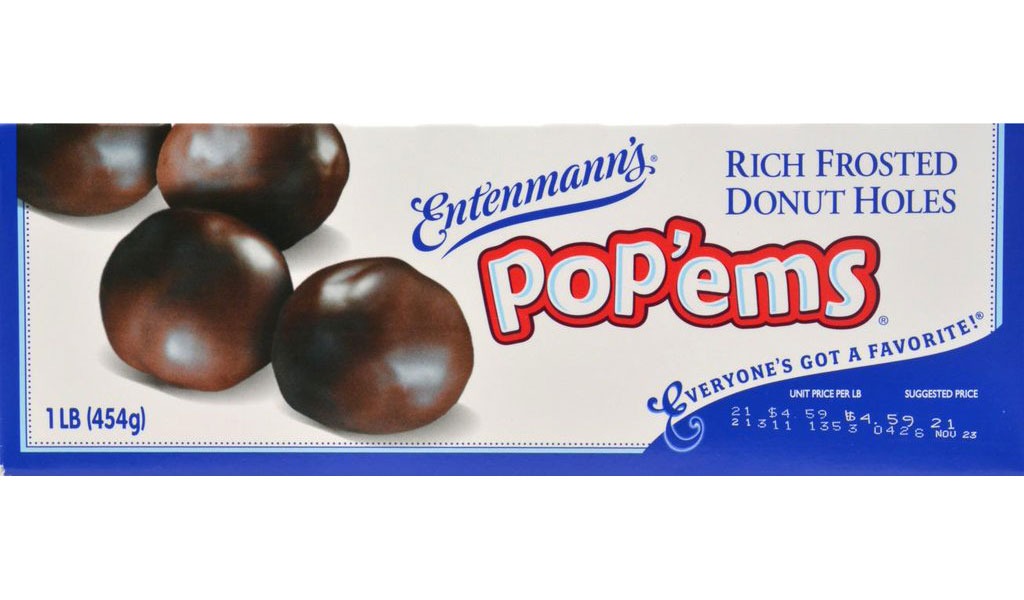 Despite their donut-hole size, these Chocolate Frosted Pop'ems are doubly worse in the fat and saturated fat department compared to their powdered counterparts. Not to mention, they'll also set you back an extra 70 calories. 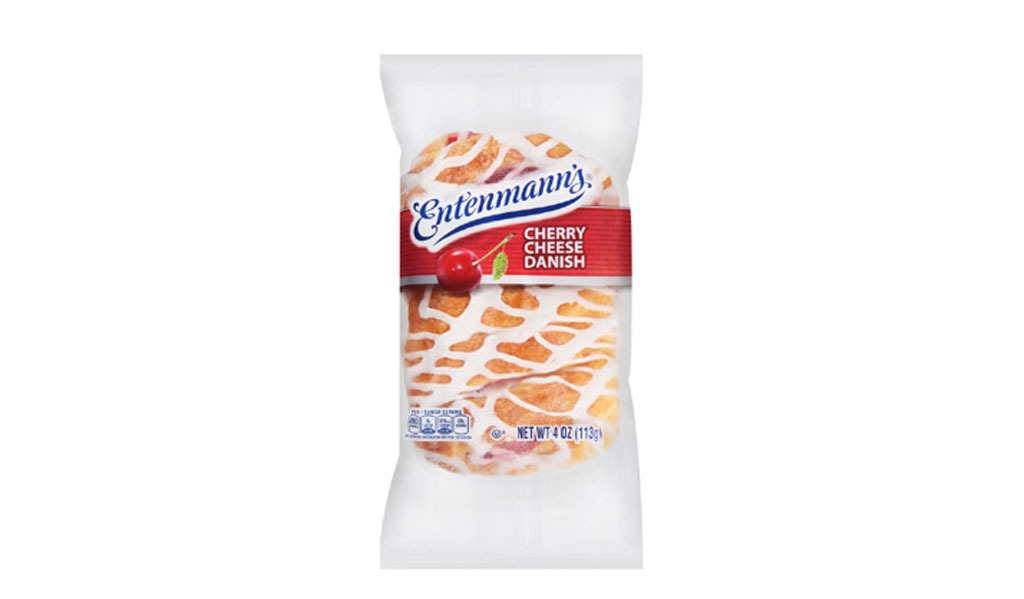 It has nearly the same amount of sugar as our Not That! pick, but we like that the Cherry Cheese Danish has a little extra cheese for significantly less fat and calories. It's like eating a cherry cheesecake for breakfast!

Not That!: Raspberry Danish Twist 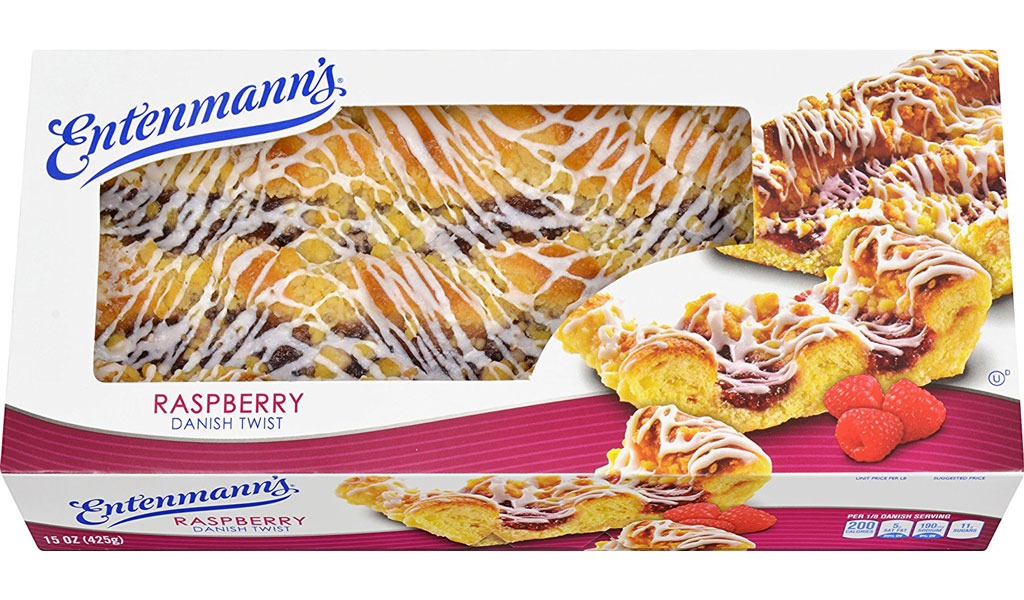 Although there is real raspberry puree used in this recipe, the sweetness and color you're seeing is likely from artificial color and high fructose corn syrup. 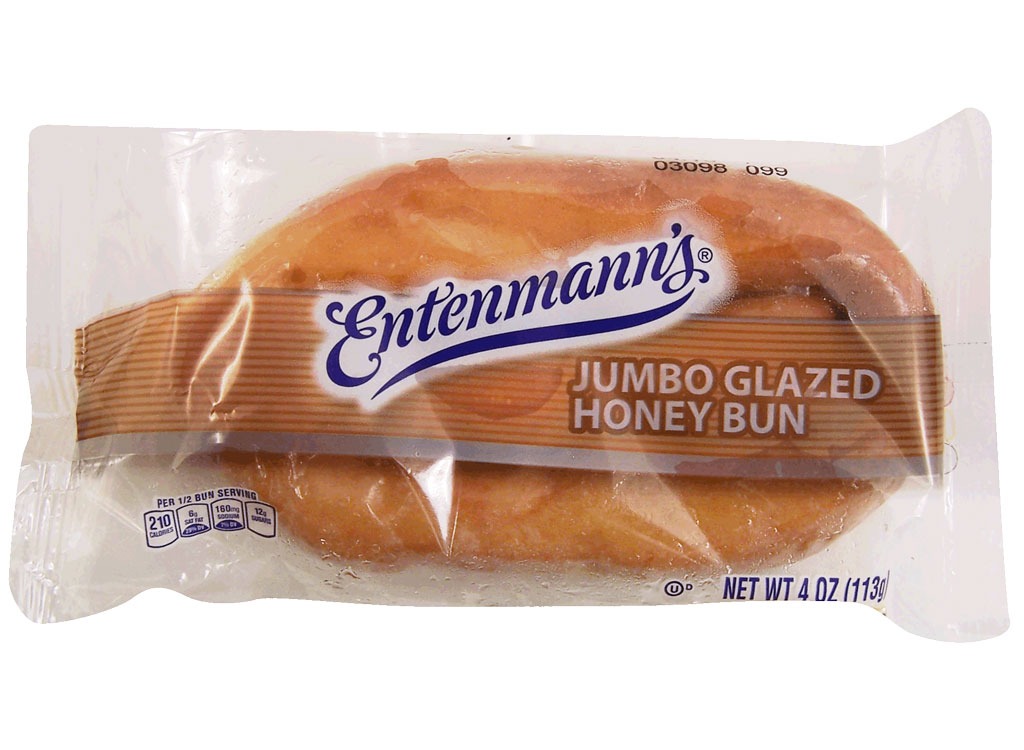 We've doubled the nutritional information you would typically see on a Honey Bun package. Why? Entenmann's only lists the nutritional information for half a bun… even though they call it "single serve." (Sounds like a food with bogus serving sizes if you ask us.) Although we'd recommend the glazed option over the iced, we wouldn't recommend indulging in this sweet regularly—especially since the ingredient list reads like a chemistry lab project: sodium hexametaphosphate, agar, fumaric acid, and ammonium sulfate. 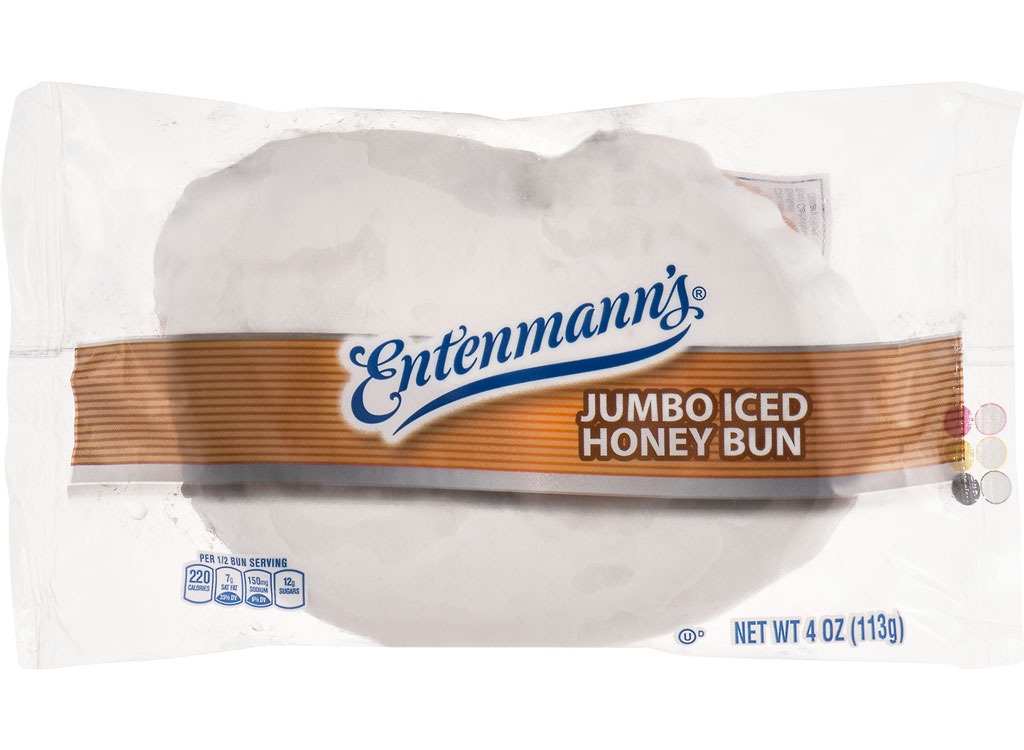 This single Iced Honey Bun rings in with nearly as many calories as a Big Mac from McDonald's. It gets worse. Thanks to having 30 grams of fat, this vending machine classic would earn a place on our list of 20 Shocking Foods With More Fat Than a Big Mac!