Nothing brings up feelings of nostalgia faster than soda packed with fruit flavor.

Nothing brings up feelings of nostalgia faster than soda packed with fruit flavor. Nothing hits quite like the first sip of Welch's grape soda on a hot day or a sip of a bright neon Orange Crush. And while you certainly shouldn't drink soda often, you can have a can every once in a while to relive your childhood.

While I've tried many sodas flavors, I've also seen many come and go (I still miss Tab Energy!). With countless brands coming and going, I looked back at some of the discontinued fruit-flavored drinks you probably won't see on the shelves again. Some varieties were ill-fated, like limited-edition flavors, while others were discontinued due to unpopularity and low sales. Here are some of the most memorable discontinued fruit sodas that are no more. Is your most beloved on the list? (Plus, don't miss, 8 Worst Fast-Food Burgers to Stay Away From Right Now.)

Orbitz, which featured multicolored floating balls of gelatin in a glass bottle–seriously–came in flavors such as Black Currant Berry and Blueberry Melon Strawberry. If you weren't lucky enough to try this odd drink, imagine boba tea mixed with Mountain Dew. It was unique!

This reddish-brown drink debuted in 1995 and was flavored like mixed berries with a dash of spice, and guaraná–a Brazilian berry touted for its ability to reduce fatigue, boost energy, and aid learning and memory. Unfortunately, it didn't catch on and was discontinued in 1999.

Sprite Remix was basically the clear, lemony soda, with different fruity flavors added, like Tropical and Aruba Jam. Like a lot of wild flavors that hit the shelves in the early aughts, these tropical sodas weren't available past 2005.

RELATED: 68 "Healthy" Foods That Are Terrible for You

Dr Pepper Berries & Cream was a unique berry-forward flavor released in April 2006 and then later discontinued in December 2007.

This soda no one really asked for came in two fruity flavors: Black Cherry and French Vanilla, and Strawberries and Cream (and also Caramel Cream) when it was released in 2006. All of these flavors seem like a lot, and we're not surprised they were discontinued. 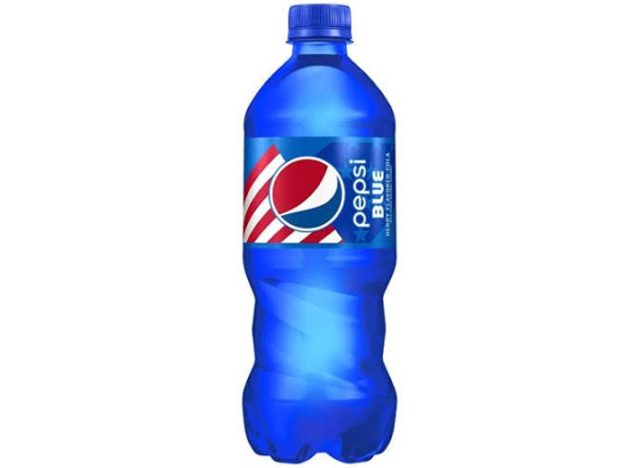 Once again, Pepsi was out there with a wild fruity soda. This one was actually blue-colored and supposedly tasted like mixed berries. Blue is actually considered one of the least appetizing colors, so it's not a shock this drink was only on the shelves for two years.

With a tropic fruit punch flavor, this fan voted for and endorsed Mountain Dew was a limited release and only hit store shelves between 2009 and 2011. Like other fan-favorite drinks, it's inspired petitions for its re-appearance.

While you can find a lot of different flavor varieties from Dr Pepper now, in 2002, Red Fusion became the first new flavor Dr Pepper added in its over 120-year history. The cherry-forward flavor wasn't really embraced by fans of the spicy-sweet soda and was discontinued (of course, there are still some people who want it back).

Created by Pepsi in the mid-70s, this "crisp" apple-flavored soda was meant to be an alternative to lemon-lime sodas. Clearly, the market wasn't interested, and Aspen quickly disappeared.

Calling this a fruit soda might be a stretch, but you're probably not surprised that the soda blended with the flavor of fruit candies–and was brown for some reason–wasn't a big hit.

Coke and lime is a pairing you see all of the time, but this fruit blend didn't click with soda fans. Perhaps the flavor of the lime in soda is probably better if it's freshly squeezed.

RELATED: What Happens to Your Body When You Drink a Coke

This pink energy drink under the Tab brand umbrella was marketed as "fuel to be fabulous" and tasted like sour berries. The only thing it really had in common with regular Tab was the pink can, and it was gone from stores by 2008.

This bright lemon-lime soda was pretty clearly launched as a competitor to Mountain Dew, and the marketing was heavily focused on gaming and extreme sports. It disappeared from shelves in 2002 when RC Cola was acquired by Cadbury Schweppes.

A previous version of this article was published on May 20, 2022.

Tanya Edwards
Tanya Edwards is a seasoned food and health journalist, who has held roles at Yahoo Health as Managing Editor and at Food Network as Programming Director. Read more about Tanya
Filed Under
Drinks // Groceries // Soda