It's gooey nut butter trapped inside a sweet chocolate shell—what's not to love? The calories, if you choose the worst brands.

There may not be a wrong way to eat a Reese's, but there's no denying that some ways are better than others—when it comes the treat's effect on your waistline, at least.

The good news is, it is possible to have your favorite sweet n' salty candy without ever thinking twice about the consequences. You just have to know how which brands to buy, which to avoid, and how many "cups" to eat. That's why our researchers at Eat This, Not That! studied every single popular peanut butter cup on the market and got the scoop on America's favorite candy (more than 366 million are sold each year). Read on, and to gather more juicy details about your favorite unofficial food group, don't miss our special report, The 36 Top Peanut Butters — Ranked!

The Good: They're Packed With Superfoods 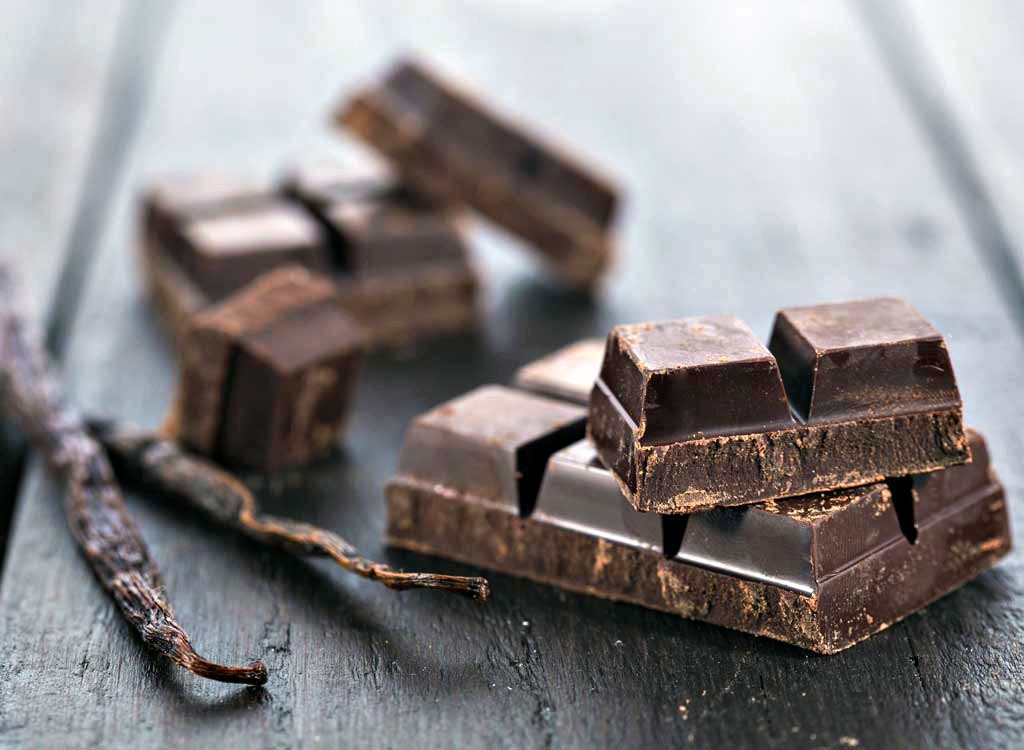 When most people hear the words "peanut butter cup," words and phrases like "delicious" and "bad for you" are typically what comes to mind. We're not most people. In its purest form, we recognize that peanut butter cups are actually just a couple of superfoods that have been smashed together and marketed as a delicious treat. When they're made with dark chocolate and a natural peanut butter (something brands like UNREAL and Justin's are doing), peanut butter cups are far from the worst thing you can eat—so long as you don't eat, like, five at once! These 150 Worst Packaged Foods in America, however, are another story.

The Bad: But They're Also Super Sugary 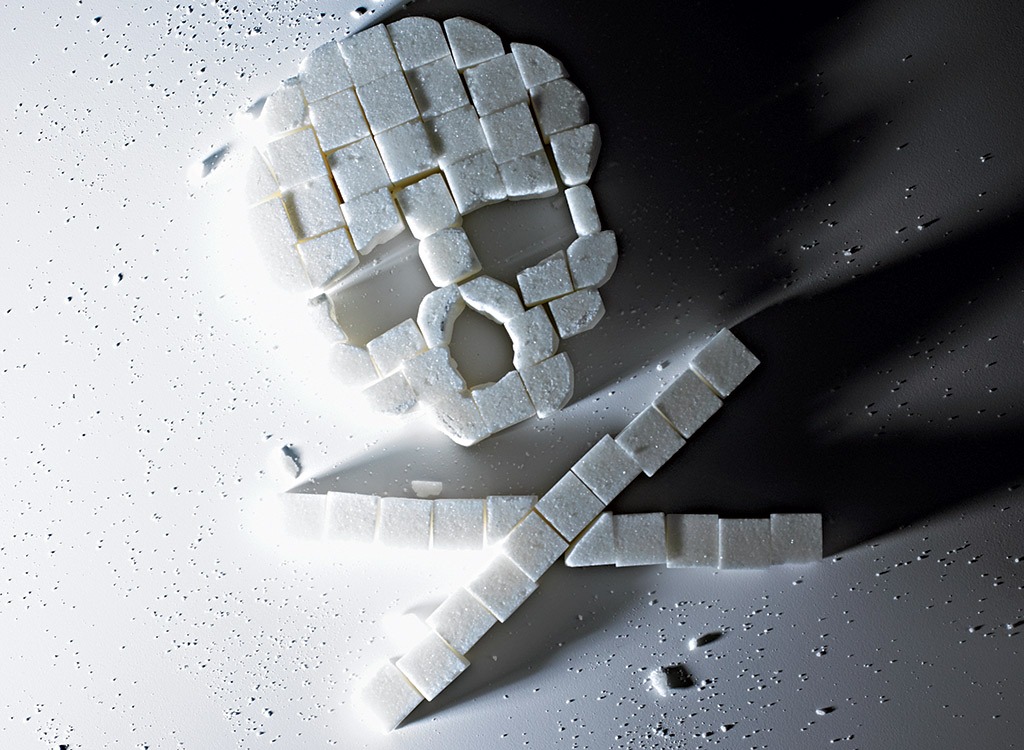 Depending on the brand and the variety you buy, peanut butter cups can be either not-so-bad or really freakin' awful. Just look at the stats: One UNREAL milk chocolate cup has 80 calories and a mere 5 grams of sugar. Justin's carries 105 calories and 8 grams of sugar a pop, and Reece's rendition has 110 calories and 10.5 grams of sugar each. But who eats just one? If you were to polish off a pack of Reese's (which contains two cups) you'd take in 21 grams of the sweet stuff. And don't forget: The American Heart Association to the World Health Organization both recommend consuming no more than 25 grams of added sugar a day for optimal health. Do you really want to waste an entire day's worth of the sweet stuff on one package of chocolate? Of course, you don't. Which brings us to our next point…

RELATED: Eat This, Not That!: Foods with Added Sugar

The Good: They Sell Little Tiny Ones 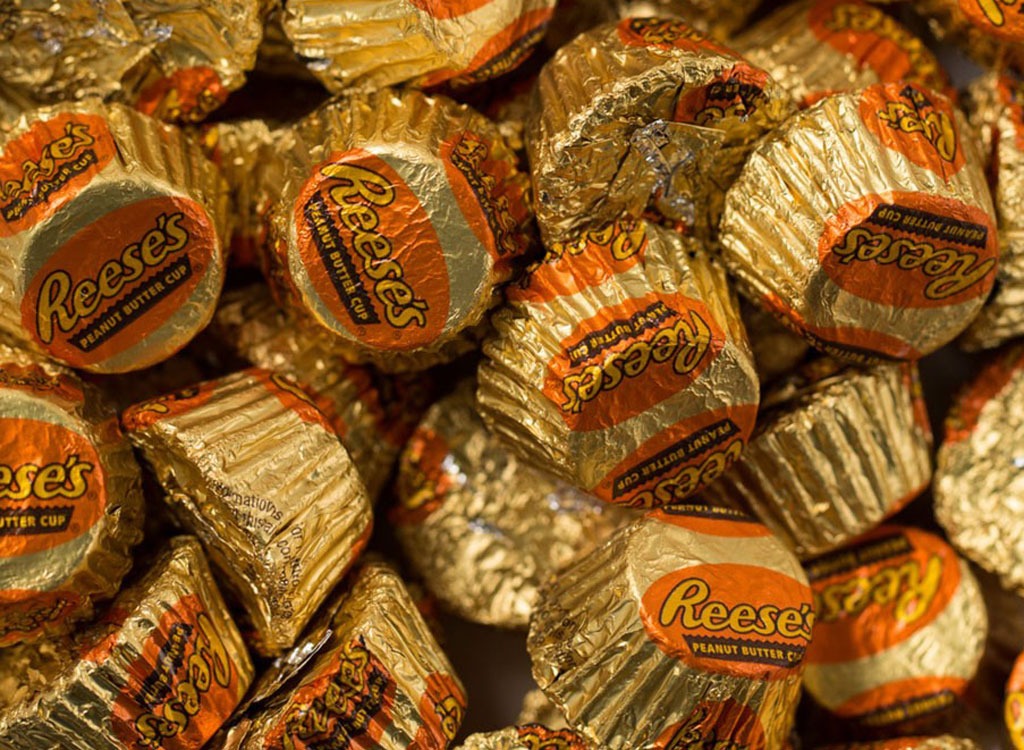 Those after dinner chocolate cravings are hard to ignore, we totally get it. But that doesn't mean you have to unravel your entire day of smart eating—and thanks to the mini version of you fave candy, you don't have to. For about 60 calories and less than 5 grams of sugar per piece, you can enjoy a mini sized Justin's peanut butter cup. Justin's is devoted to sustainable, organic ingredients, and these cups are made with dark chocolate, peanuts, cane sugar and other ingredients you can easily pronounce, making them a smart choice—so long as you actually cut yourself off after one or two. Which, we know, isn't always an easy feat. In a recent ETNT Twitter poll, 56 percent of readers fessed up to eating 4 or more minis in one sitting. Sorry to say, that's not a great habit.

Five of Justin's minis have 24 grams of the sweet stuff and five miniature Reese's Peanut Butter Cups have 23 grams—that's more than you'd find in a glazed donut! If eating just one tiny candy doesn't cut your craving, consider pairing it with some fresh raspberries (one of the lowest sugar and most fiber-filled fruits Mother Nature has to offer) or an additional tablespoon of nut butter for some blood sugar sustaining protein. Cut the little candy in half, and dip each side into a bit of extra creamy goodness!

The Bad: But They Also Sell Massive Ones 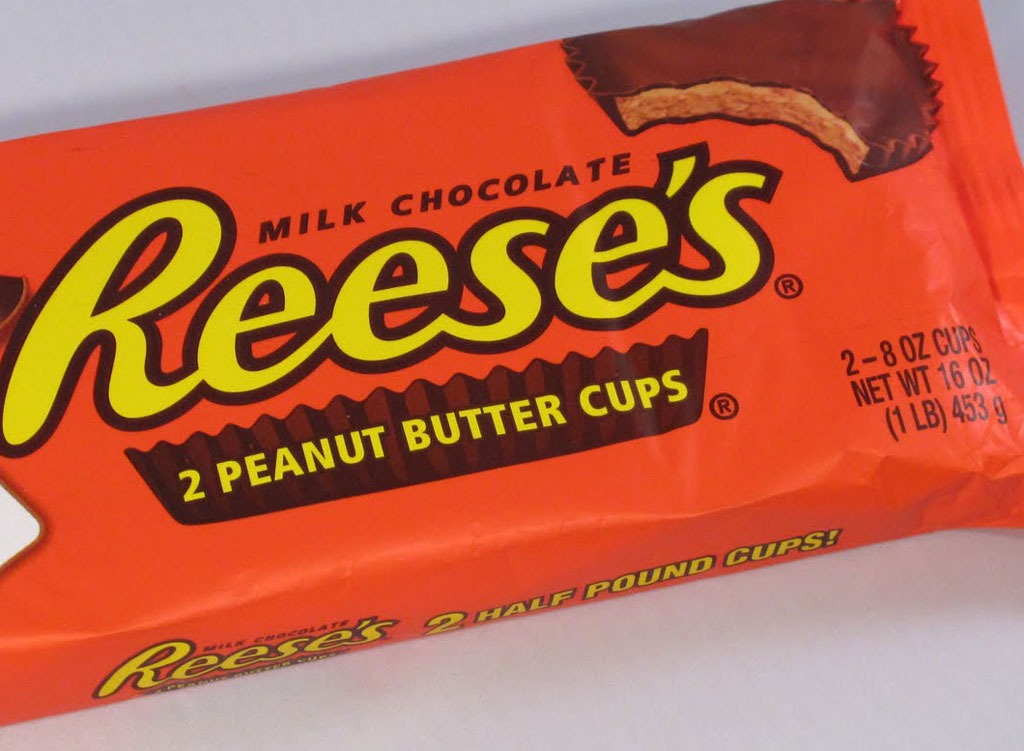 If you happen to have $15 and 2,300 calories to spare, you might have considered buying a package of the World's Largest Reese's Peanut Butter Cups. Our suggestion: don't pull the trigger. They're seriously gigantic! While a typical peanut butter cup is about is about 0.85 ounces, a single giant cup o' chocolate is 8 ounces, which is half a pound! That hefty ball of sweetness carries 240 grams of sugar and more fat than you'd find in four Big Macs! Even if you split it with four friends, you'd still be taking in nearly 600 calories worth of dessert, which is never a good thing whether you're trying to lose 10 pounds or not! Seriously, it should be illegal to even sell a candy this large. Just say no!

The Good: They Make Organic Ones

If Reese's are your go to, you might want to consider switching to a peanut butter cup from an organic brand like Justin's, Newman's Own, Theo, or Unreal—a company on a mission to recreate junk foods with less sugar and more taste. We like their cups because they're made with real-deal dark chocolate, an ingredient proven to lead to weight loss. Thanks to certain flavanols that exist in dark chocolate, eating moderate amounts of dark chocolate has been found to reduce overall body fat and shrink the waist. A study among women with normal weight obesity (skinny fat syndrome) who ate a Mediterranean diet that included two servings of dark chocolate each day showed a significant reduction in waist size than when on a cocoa-free meal plan. Yes, that's right you can eat dessert and lose weight, too—but remember, it's only possible if you keep portions in check! Although it's healthy, chocolate is quite caloric.

The Bad: They Transform Them Into Junk 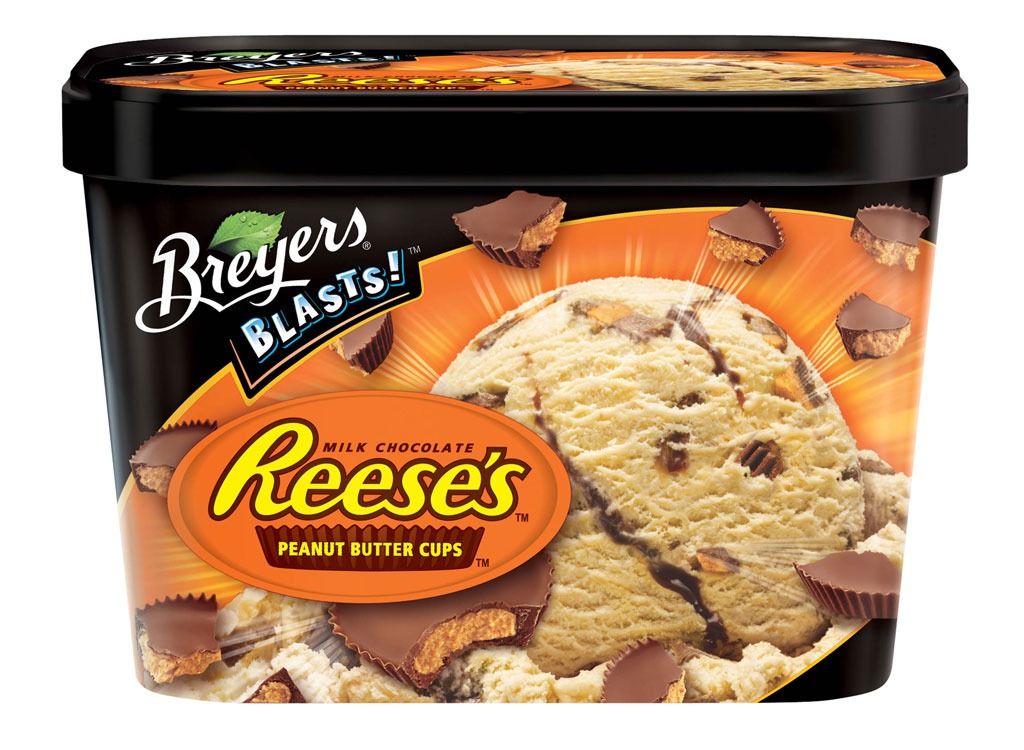 First, there was the Reese's Puffs Cereal, then came the cupcakes and tubs of ice cream mixed with the candy. And then Reese's Oreos and Krispy Kreme's Reese's donuts soon followed. So, basically food manufacturers used the candy to make junk, junk, and more junk! Oh, and let's not forget about the Reese's Peanut Butter Cup burger. Yes, you read that correctly. Last year Canadian fast-food joint The Works, created something they dubbed The Reese's Get Stuf'd Burger. The 8-ounce beef patty was filled with cheese and Reese's PBCs, then topped with onion rings, two strips of bacon…and even more Reese's Peanut Butter Cups.

The Good: You Can Easily Make Your Own 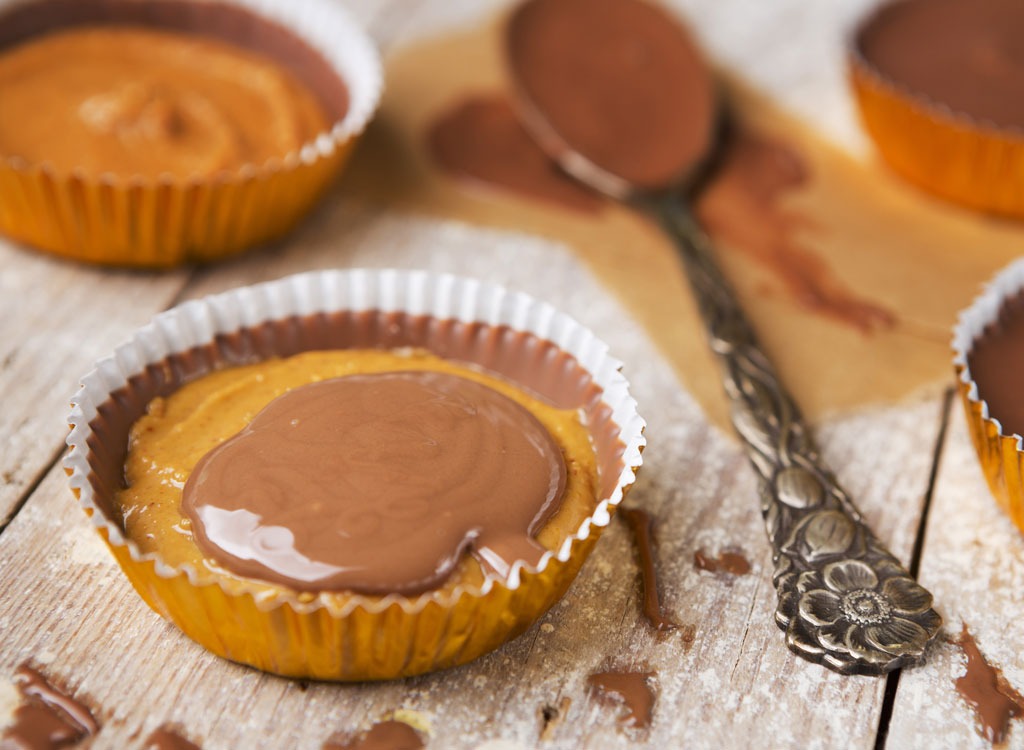 Though we're fans of all the healthier-for-you brands of PB cups on the market, nothing is tastier—or healthier—than making your own batch at home. Not only is the process super simple, you can retain total control over the ingredients and size of each candy. One of our favorite recipes for the treat comes from Fit Foodie Finds, and has less than a gram of sugar a pop! She also has another recipe for protein powder-infused PB cups which you can find here! Happy baking, guys!

The Bad: They'll Break Your Heart

If it's the orange and yellow bag of mini PB cups that makes your heart sing, we've got some bad news. Your favorite candy contains some questionable ingredients, one of which, can put some major stress on your heart and arteries. Yes, that's right, we're talking about hydrogenated vegetable oil (one of these 23 Worst Food Additives in America), a type of dangerous trans fat that's been shown to contribute to heart disease more so than saturated fat. While most health organizations recommend keeping trans fat consumption as low as possible, a loophole in the FDA's labeling requirements allows processors—like Reese's—to add as much as 0.49 gram per serving and still claim zero in their nutrition facts. Sneaky! There's more bad news. The treat also harbors something called TBHQ, a corrosion inhibitor used in biodiesel fuel. You don't really want to be putting that into your body, do you?

The Good: They're Super Versatile 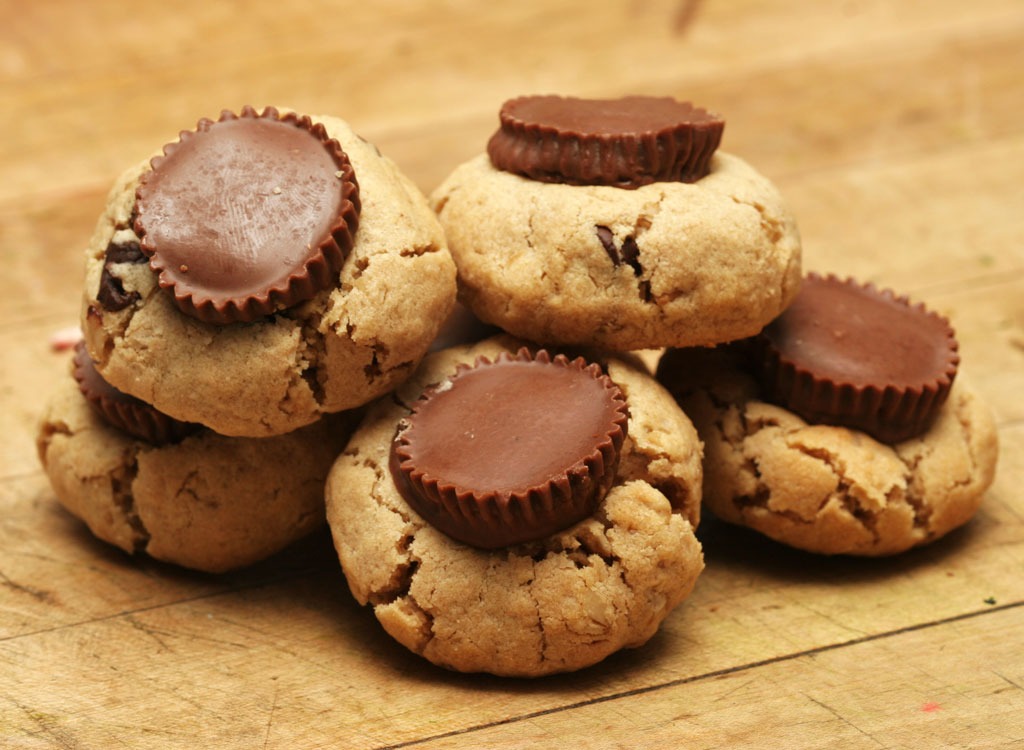 Sure, peanut butter cups are tasty on their own, but there are so many delicious and creative ways to add them to other dishes for a sweet upgrade. Use them to make cookies, bake them into the base of a cupcake, crush a mini one into your morning oatmeal along with some peanut butter and chia seeds, or use them to coat a candy apple. The possibilities are truly endless!

The Bad: They Have Holiday Editions 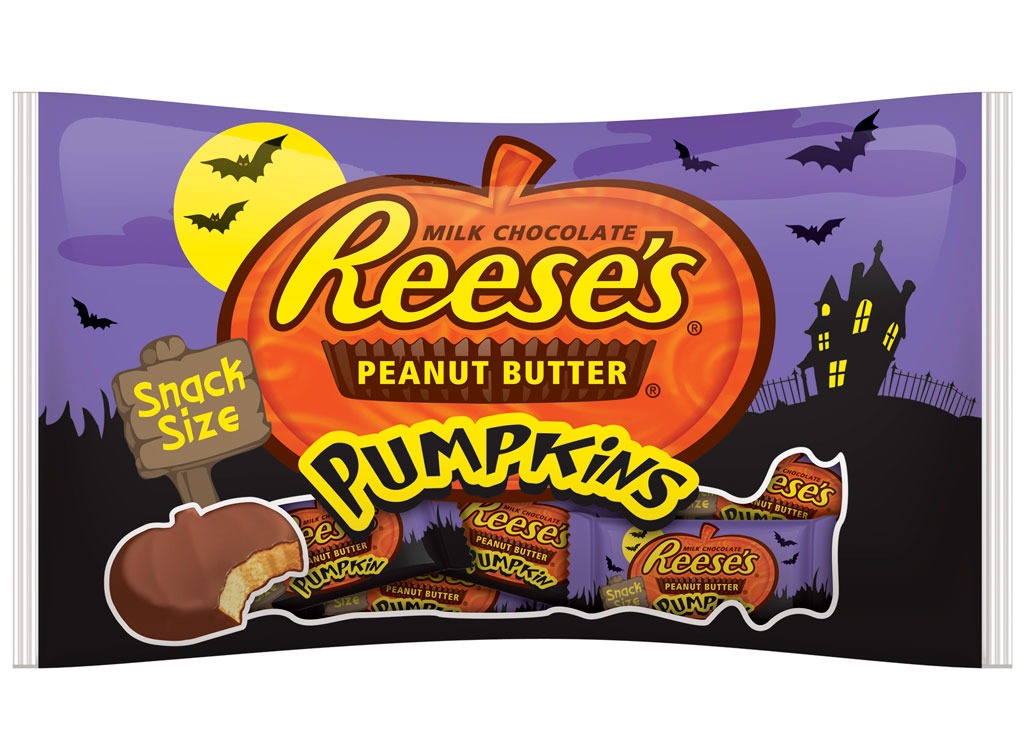 Holiday-themed candies are awesome—especially the ones from Reese's. They are heart-shaped ones for Valentine's Day, egg-shaped ones for Easter, and pumpkin-shaped ones in honor of Halloween. People go nuts for these things. I literally know, like, three people, that will only eat peanut butter cups that are fashioned after their favorite holiday symbols. Is this humorous? Absolutely. But it's also a very bad thing. Any time people are eating junk their body doesn't need just because it's a holiday means that food marketers are winning and improving their bottom line while your waistline and health are taking a backseat.