In case you've been living under a rock, the trendy paleo diet is a way of eating that harkens back to the time when people lived under rocks.

That's a time before agriculture, about 10,000 years ago. Back then, our ancestors hunted, fished and foraged for their food energy. Humans evolved by eating this way, and the idea behind the paleo eating plan is that without dairy, grain products and processed food, we'd feel and look better. Many people swear by it.

The big difference between way back then and now is the easy availability of meat, fish, vegetables, fruits and nuts. Cavemen and -women didn't know when the next wounded kudu would cross their path, or where they'd find the next patch of wild yams. We simply don't have that problem: All of our food — including items considered paleo-compliant — can be conveniently found at the supermarket.

As a result, we can go hog wild when it comes to eating wild hog, and therein lies the rub: When it comes to blasting belly fat, not all items on the paleo diet are created equal. Although eschewing processed foods is always a good idea, we've rounded up the best and worst paleo foods for beating back the bulge. Take heed, and you may end up looking at lean and fit as a Kalahari bushman. For more ways to uncover your abs, check out these 42 Ways to Lose 5 Inches of Belly Fat! 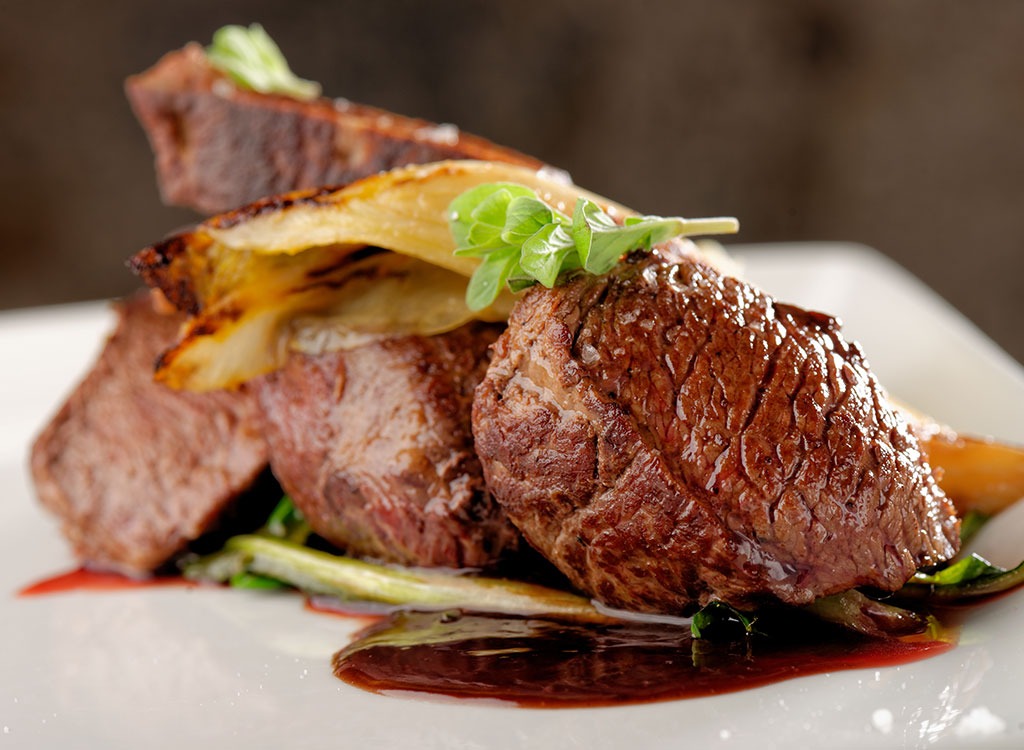 Wild game like deer, elk, caribou and antelope are leaner than farmed animals because they're more active, aren't fed grain and aren't treated with antibiotics or hormones. Game meat also has about one-third fewer calories than lean cuts of beef and pork that you'll find in the supermarket, while game birds — think duck, pheasant and wild turkey — have about half the calories of their farmed cousins. Wild-caught meat also has significantly less saturated and total fat. According to an article published in the Journal of Nutrition, a higher intake of saturated fat accentuates obesity risk.

The brilliant color of strawberries is a giveaway that they're not only bursting with nutrition but an ally in your bid to get hunter-gatherer-worthy abs. The red hue is created by phenolic acid, which helps to regulate blood sugar. And they only have about 7 grams of sugar per cup! Make them a staple of your weight loss smoothies. 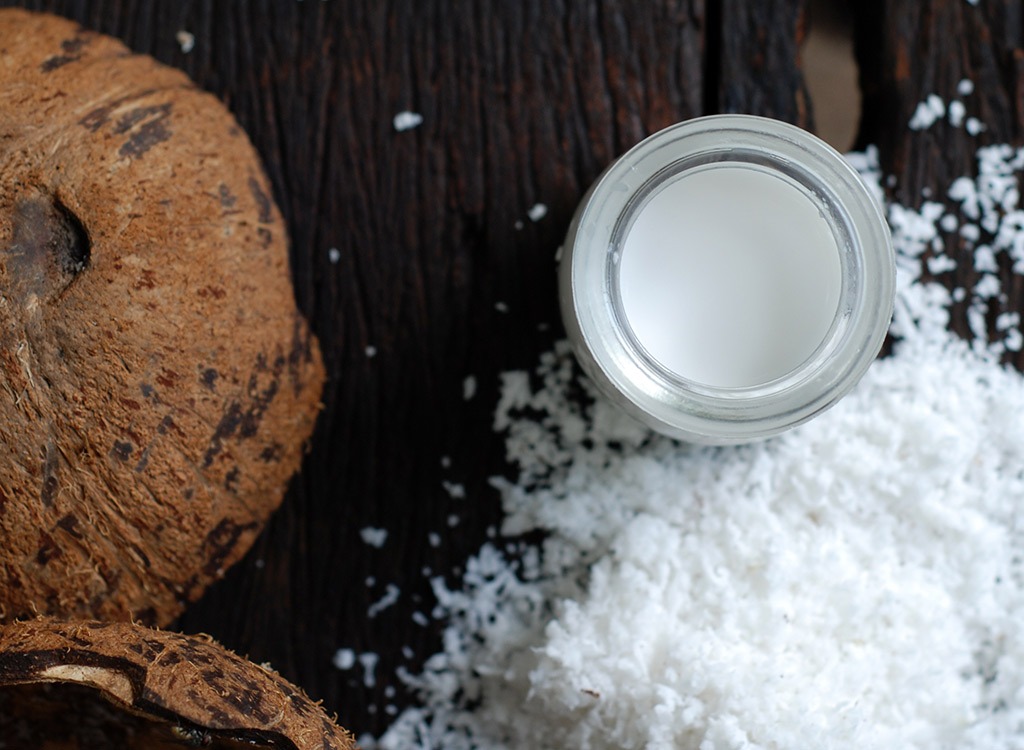 Your body needs fat to heal wounds, keep your metabolism humming and get your brain cells firing. Coconut oil fits the bill and gets a big thumbs up from paleo enthusiasts. Why? It's partly due to the medium-chain saturated fat lauric acid, which converts to energy more easily than other types of fat, ultimately aiding weight loss.

Although it may be tough to source wild turkey, you can buy organic and feel confident that you're still adhering to the paleo lifestyle. A quarter-pound turkey burger patty contains 140 calories, 16 grams of protein and eight grams of fat. Additionally, turkey is rich in DHA omega-3 acids—18 mg per serving—which have been shown to boost brain function, improve your mood and turn off fat genes, preventing fat cells from growing in size. Just make sure you buy white meat only; dark contains too much fat. Turkey is just one of the 29 Best-Ever Proteins for Weight Loss!

According to the United States Department of Agriculture, a 180-gram serving of boiled spinach provides 6.43 mg of the muscle mineral—that's more than a 6 oz hamburger patty! Recent research also suggests compounds in the leaf membranes called thylakoids may serve as a powerful appetite suppressant. A recently published long-term study at Lund University in Sweden found that having a drink containing thylakoids before breakfast could significantly reduce cravings and promote weight loss. On average, the women who took the spinach extract lost 5.5 pounds more than the placebo group over the course of three months. 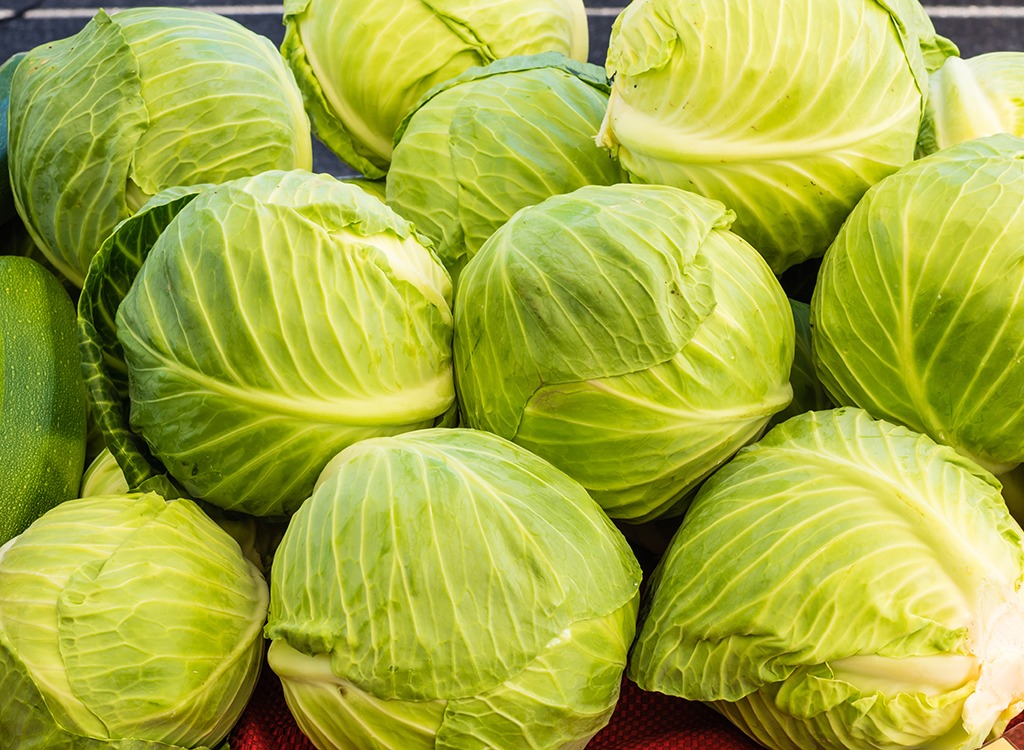 Cabbage is a great source of fiber, and that's great news for you if you like the stuff and want to shed some pounds. A recent study found that people who added more of it to their diets — without changing anything else — lost almost as much weight as people who followed the heart-healthy, low-fat eating plan recommended by the American Heart Association. But that's not all. Cabbage is an amazing diuretic, which means it helps you shift belly bloat from water retention. For more ab-carving foods, check out these 25 Best Foods for a Toned Body!

Thanks to paleo, bacon is more popular than ever (if that's possible), and we recommend going with old school, full-fat pork. Although opting for turkey bacon will save you about 13 calories and a gram of fat per slice, it also adds sodium to your plate, which can lead to high blood pressure and water retention. Plus, pork offers more protein and heart-healthy monounsaturated fatty acids (MUFAS) than its poultry-based counterpart.

Yeah, we know: grass-fed beef is a little pricey. But its higher ratio of good-for-you fats make it well worth the cost: A study in Nutrition Journal found that grass-fed meat — the kind of ungulates our ancestors would have eaten — contains higher levels of omega-3 fatty acids, which are known to reduce the risk of heart disease. And when it comes to your waistline, grass-fed beef is naturally leaner and has fewer calories than conventional meat. Consider this: A 7-ounce conventional strip steak, trimmed of fat, will run you 386 calories and 16 grams of fat. But a 7-ounce grass-fed strip steak is only 234 calories and five grams of fat—you'll save more than 150 calories and your steak will taste better. 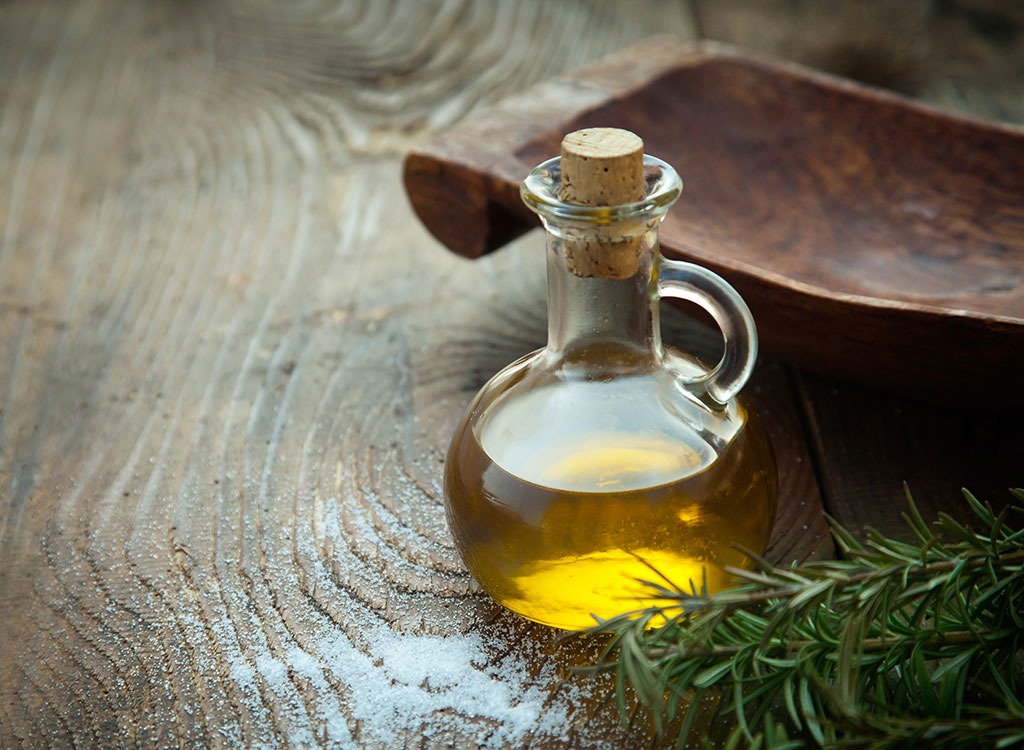 Olive oil is rich in cancer-fighting polyphenols and heart-strengthening monounsaturated fats, and when it comes to looking lean, it's backed by some pretty strong facts. A recent study from Obesity found that an olive-oil-rich diet resulted in higher levels of adiponectin than did a high-carb or high-protein diet. Adiponectin is a hormone responsible for breaking down fats in the body, and the more you have of it, the lower your BMI tends to be.

Certain dietary fats come with red flags. And the absolutely worst match for your apple-shaped figure: saturated fats. While unsaturated fat can help reduce abdominal fat, saturated fat can increase waist size, a study published in the journal Diabetes found. Saturated fats, like the kind you'll find in baked goods and red meat, "turn on" certain genes that increase the storage of fat in the belly, researchers say. Polyunsaturated fats, on the other hand, activate genes that reduce fat storage and improve insulin metabolism. At about 13 grams per one-ounce serving, paleo-friendly walnuts are one of the best dietary sources.

As a fruit, mangos definitely qualify as a paleo food, and to be fair, they have plenty of good qualities. For starters, they're filled with soluble fiber and the vitamins C, A and B6. But even by fruit standards, mangoes are high in sugar—just one contains 31 grams! Opt for a less sugar-laden fruit, like berries or bananas.

It's just fruit plus sunlight, right? What could be so bad about that? Well, the simple fact is that dried fruit is incredibly tasty because it contains way more sugar than raw fruit. One cup of raisins contains more than 434 calories, almost the same amount found in one-and-a-half McDonald's cheeseburgers! Yeah, dried fruit is high in fiber and a fiber rich diet is definitely a good thing when you're gunning for a flat tummy but all that sugar is going to offset a lot of the benefit. Enjoy, but sparingly. Scarfing too much sugar is definitely one of the 30 Bad Habits That Lead to a Fat Belly.

In his book, Eat, Drink, and Be Healthy, Walter C. Willett, chair of the Department of Nutrition at the Harvard School of Public Health, said about this paleo food, "Nutritionists and diet books alike often call potatoes a 'perfect food. But although eating potatoes on a daily basis may be fine for lean people who exercise a lot or who do regular manual labor, [e.g. hunting and gathering], for everyone else potatoes should be an occasional food consumed in modest amounts, not a daily vegetable. The venerable baked potato increases levels of blood sugar and insulin more quickly and to higher levels than an equal amount of calories from pure table sugar."

Unlike flab-fighting strawberries, this red fruit packs a lot of sugar. One entire pomegranate contains about 39 grams—that's four more than a 12 oz can of Coca-Cola! The antioxidant-rich fruit has been shown to benefit the heart and even slow the process of aging, but if blasting belly fat is your goal, too much of this paleo food might put a wrench in your plans.