Find out where fast-food offerings rank nutritionally among America's most popular chains.

It's a concerned parent's nutritional nightmare: You take your youngster to see the latest animated film, and she loves it. She wants to own everything ever created with the characters plastered on it. Your house soon becomes a shrine to these creatures, filled with plastic idols. But inevitably, there's one more toy that she simply MUST have: and it comes inside a fast-food restaurant kids meal. And so you buy one, knowing it's nutritionally a bad move.

To fight back, New York City has just proposed a new "Healthy Happy Meals" bill, one that would force McDonald's, Burger King and other fast-food purveyors to lower the fat, sodium and calorie counts in meals that use toys to lure kids—and their eager-to-please parents—into the drive-thru.

We love this idea. The average fast-food kids' meal now has 600 calories and gets 36 percent of its calories from fat, according to a study at New York University. The city's proposed bill would cut calories by 9 percent and fat by 10 percent—enough to make a healthy difference. But it's not just the local fast food joint that's serving up an unwelcome dose of fat and calories. The editors of Eat This, Not That! magazine took a deep dive into the ball pits at some of our most popular chains, and uncovered the Best and Worst Kids Meals in America. Read on below, and before you order your small ones an unhealthy small Coke, read these 7 Amazing Things That Happen To Your Body When You Give Up Soda!

610 calories, 15 fat (3 g saturated fat), 1,590 mg sodium, 45 g carbs, 17 g protein
Chang's tries to shroud its nutrition numbers by breaking meals into multiple servings. Don't be fooled. The restaurant continues its usual sodium assault on its new kids' menu. There you find a dish whose potential (chicken and rice, what could possibly go wrong?) is outweighed only by the surplus of salt saturating every last greasy grain of rice. 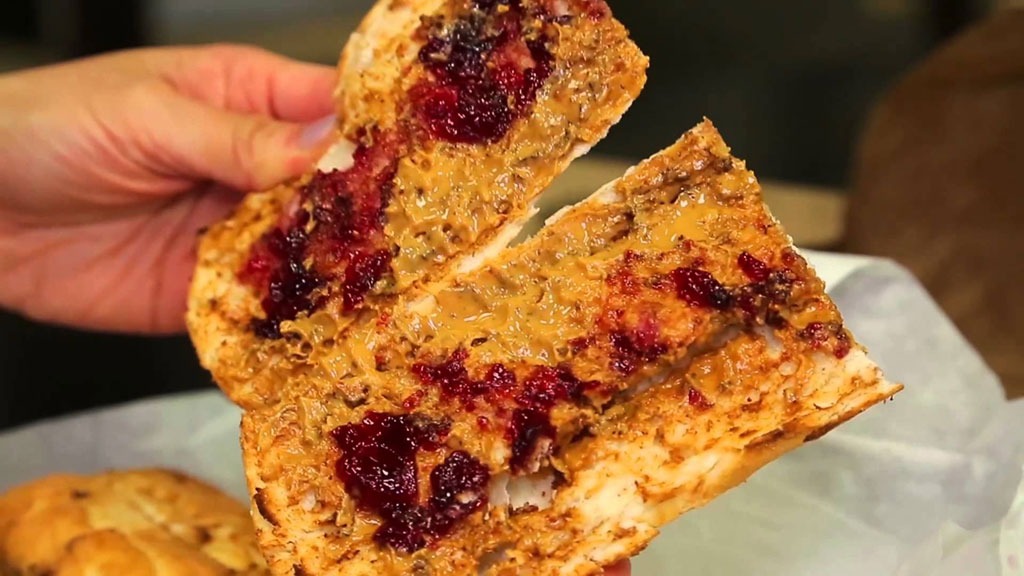 1,340 calories, 51 g fat (10 g saturated fat), 1,390 mg sodium, 199 g carbs
With only three ingredients—bread, peanut butter and jelly—this lunchbox favorite has the least amount of ingredients, but the highest calorie count on Potbelly's menu, not to mention a sugar level that rivals a pot of candy (it's for the sugar equivalent of 11 Krispy Kreme doughnuts!) Since this is nominally for adults, a half-portion for Junior would run you 670 calories—still too many for a sandwich. Instead, trade the P-B-J for a T-K-Y, a lighter take on turkey and cheese. Ask for "thin-cut" for a thinner sub, with ⅓ of the bread removed from the regular size—perfect for kids.

880 calories, 83 g fat (13 g saturated fat), 1,810 mg sodium, 71 g carbs, 3 g fiber, 11 g sugar, 30 g protein
These fingers would be criminally caloric even if they were intended for adults. In fact, to match this three-digit calorie count, a kid would need to eat 18 McDonald's Chicken McNuggets. The road to nutritional safety with Perkins' kids menu is pocked with potholes, so either order the mac and cheese or keep on driving. 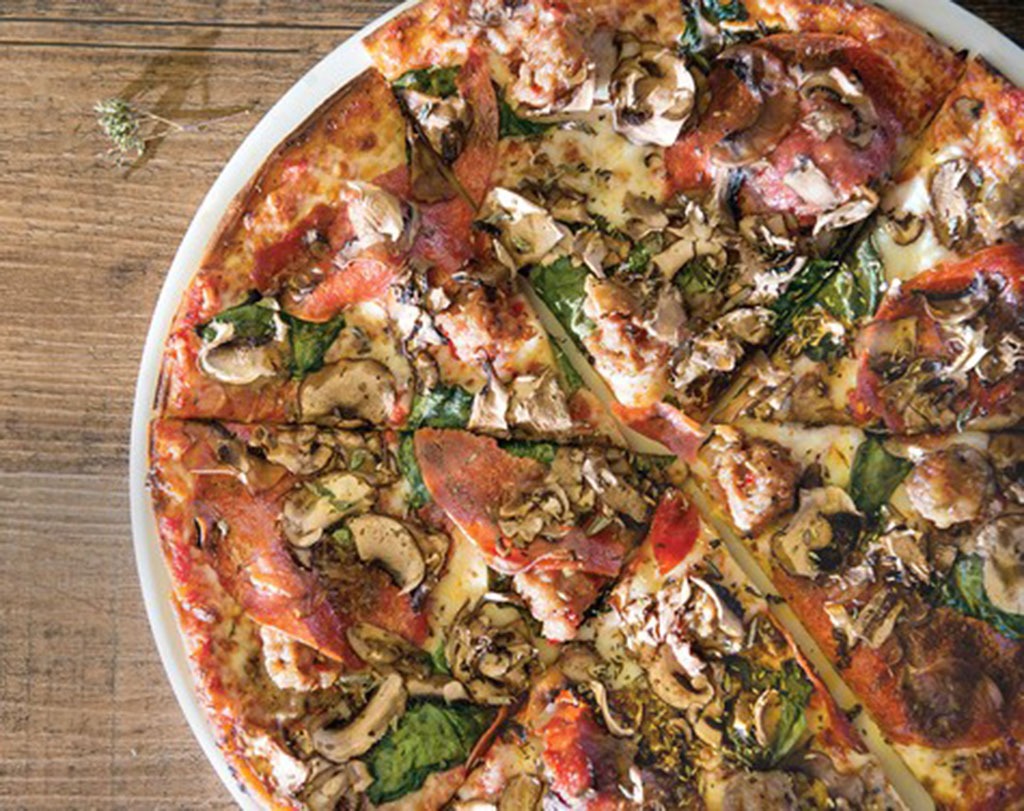 610 calories,19 g fat, 7 g saturated fat, 1,430 mg sodium, 82 g carbs, 4 g sugar, 3 g fiber, 25 g protein
The sad truth is that we could have picked any of the kids' pizzas for this list. Even the cheese pizza has 560 calories, and the other options go up from there. Thank the thick dough and heavy-handed cheese application. The little ones could eat two slices of Original Mushroom Pepperoni Sausage pizza from a six-slice adult pie and save more than 210 calories.

680 calories, 42 g fat (17 g saturated fat, 2 g trans fat), 1,570 mg sodium, 44 g carbs, 2 g fiber, 9 g sugar, 31 g protein
Just another sad example of Restaurant Law 172A, the Mini-Burger Paradox (MBP). The MBP states that the more diminutive the burger, the more potential it possesses for nutritional mayhem (see: Ruby Tuesday, Chili's, et al.). If restaurants stopped with one mini, you'd be fine, but these baby burgers normally come in groups of two or more—so you end up with two buns, two slices of cheese, two sets of condiments. The end result is a total package with more calories, fat, and sodium than you'd find in one normal-size burger. To witness other beefy burgers we have a beef with—including a video of a nine-patty hamburger nearly a foot tall!—click here for The Worst Burgers in America 2015! 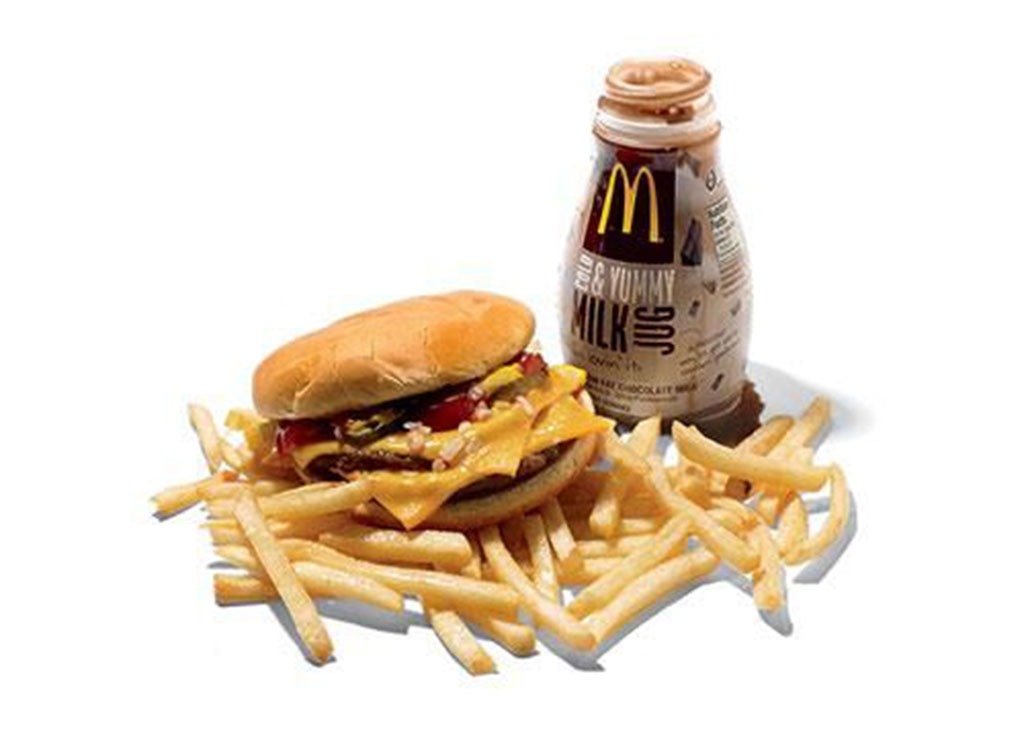 790 calories, 30 g fat (10 g saturated fat, 1 g trans fat), 1,150 mg sodium, 95 g carbs, 5 g fiber, 25 g sugar, 36 g protein
The Golden Arches should be commended for increasing the number of healthy options in recent years. In particular, its Apple Dippers have inspired other large chains to offer alternatives to fried potatoes. Unfortunately, it's still easier to construct a lousy meal at McDonald's than it is a good one. This combo chews through more than a half day's worth of calories, fat, and sodium. And no toy in the bottom of the box can make that better. Instead, order from this sure-fire list of what 7 Diet Experts Eat at McDonald's!

800 calories, 47 g fat (28 g saturated fat, 1.5 g trans fat), 780 mg sodium , 71 g carbs, 5 g sugar, 5 g fiber, 25 g protein
Whereas most kid favorites—chicken fingers, cheeseburgers, even hot dogs—offer some redeeming nutritional value, macaroni and cheese brings nothing but cheese, cream, and refined carbohydrates to the table. CPK appears willing to solve that problem with the inclusion of protein- and fiber-rich edamame in its mac, but instead it stuffs its kiddy bowls to the brim with one of the most calorie-dense pastas we've ever seen. Another good opportunity squandered by the restaurant industry's penchant for excess. 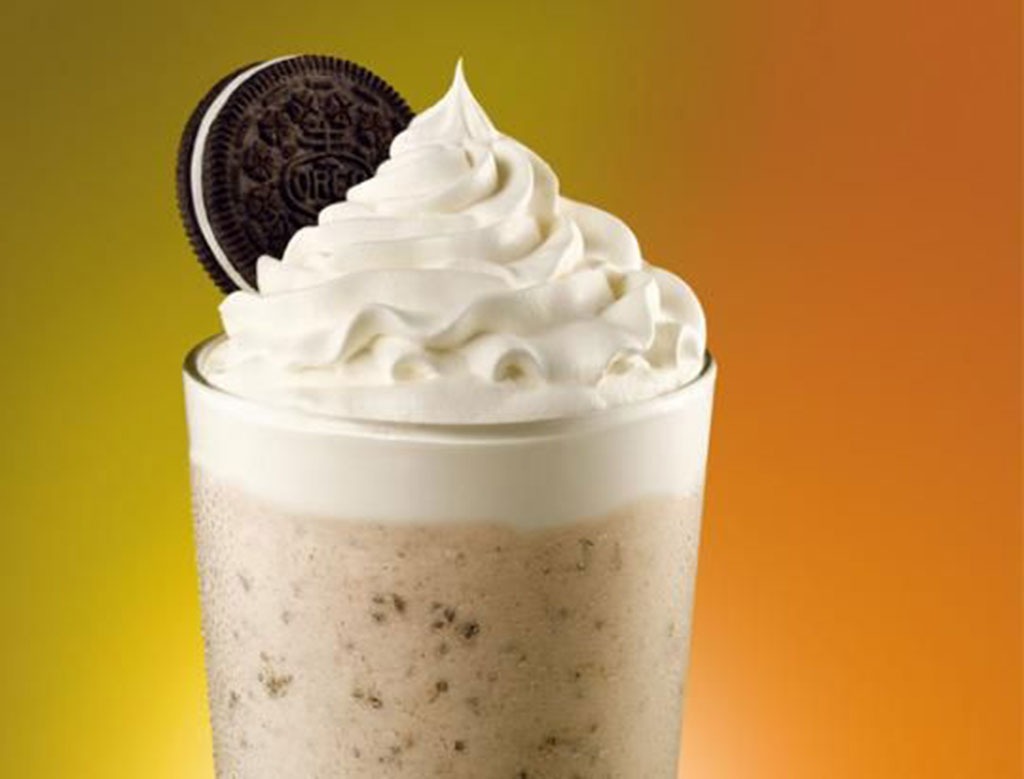 840 calories, 41 g fat (22 g saturated fat), 470 mg sodium, 100 g carbs, 1 g fiber, 74 g sugar, 20 g protein
Nearly all of those 100 grams of carbohydrates are pure sugar. That's an insulin spike that would make diabetes specialists cringe. (Not to mention dentists.) Your child would have to eat 16 Oreos to match this shake's caloric heft. Better off going with chocolate milk—or a scoop of ice cream. Or give them a delicious smoothie using cocoa powder and peanut butter that takes just like a milkshake. Use our Best-Ever Healthy Smoothie Recipe! 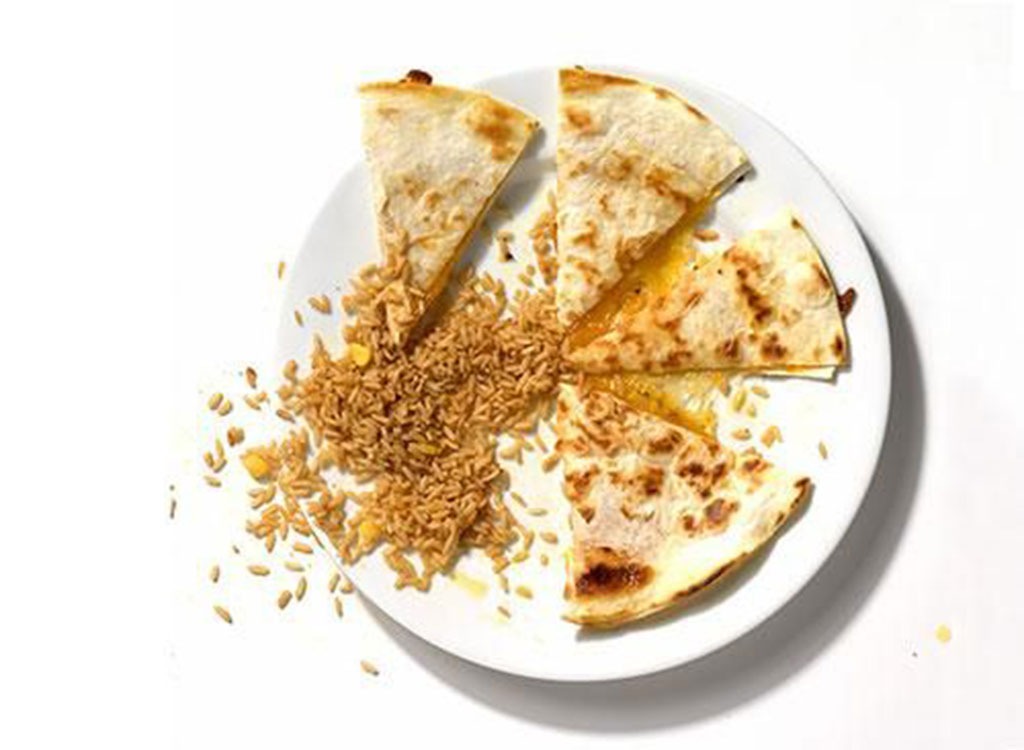 On the Border Kid's Cheese Quesadilla with Mexican Rice

1,170 calories, 73.5 g fat (31 g saturated fat) 1,790 mg sodium, 90 g carbs, 2 g fiber, N/A g sugar, 38 g protein
On the Border's kids' menu mostly offers reasonable Mexican fare, but this cheese quesadilla, along with the nachos, stands out as a disturbing outlier. How the chain veers so far off course with this item, we don't know. Is it overloaded with cheese, or is the chicken poached in butter? Whatever the case, this quesadilla and rice provide more calories than should be in two kids' meals and enough sodium to cure a whole hog.

MELT UP TO 10 POUNDS IN ONE WEEK! WITH OUR BEST-SELLING NEW DIET PLAN, The 7-Day Flat-Belly Tea Cleanse! Test panelists lost up to 4 inches from their waist! Available now for Kindle, iBooks, Nook, Google Play, and Kobo.

Eat This, Not That!
Inspired by The New York Times best-selling book series, Eat This, Not That! is a brand that's comprised of an award-winning team of journalists and board-certified experts, doctors, nutritionists, chefs, personal trainers, and dietitians who work together to bring you accurate, timely, informative, and actionable content on food, nutrition, dieting, weight loss, health, wellness, and more. Read more about Eat This
Filed Under
Foods To Avoid // Kids // Restaurant Chains