9 Diet Tricks We Learned from M&Ms

Americans consume more than 100 million M&Ms every day. And they have done for the past 10 years, according to Mars, Inc. Break out the calorie calculator, and we're talking nearly 500 million calories—per day—from the sugar-coated chocolate morsels alone!

While M&Ms can't be solely to blame for the country's expanding waistline—a few more equations reveal the average person eats one packet every three months or-so—it's clear we have an affinity for the colorful candy that "melts in your mouth, not in your hand." In fact, M&Ms have helped scientists make significant discoveries about diet and behavior that can improve our health and further our weight loss goals. Here's a handful of our favorite tricks for weight loss the classic candy taught us: 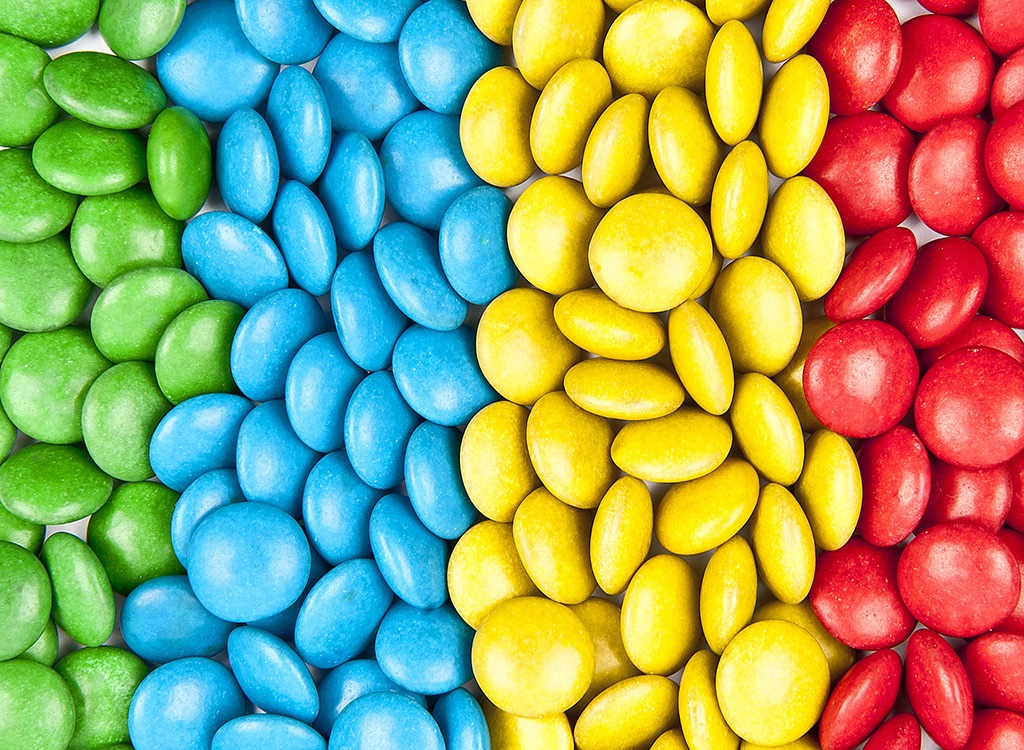 Variety is the spice of life, and one of the reasons it's so hard to stick to a diet, according to researchers at Cornell Food and Brand Lab. Their review in the Journal of Consumer Research suggests contextual cues, such as the variety of a food offering's colors, can lead people to overindulge. In one cited study, moviegoers given M&Ms in 10 colors ate 43 percent more than those offered the same number of M&Ms in seven colors. And a similar study using jellybeans found a combo bowl of six colors let people to eat an average 69 percent more than when the colors were presented in separate bowls. We eat with our eyes first, researchers say, and the more colors we see, the more we tend to eat. Be extra mindful of how variety may be playing tricks on your appetite, especially when facing a generous buffet or holiday spread.
2 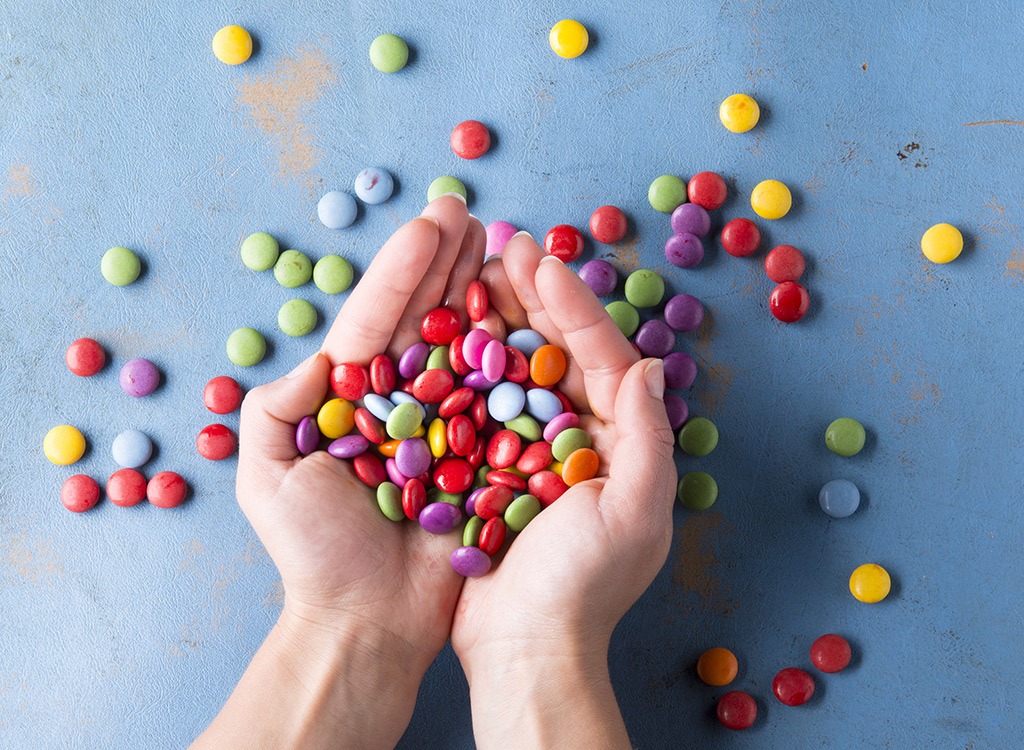 Before grabbing a handful of M&Ms, think about what you're about to do. A recent study suggests fantasizing about eating an entire packet of your favorite candies before you indulge may cause you to eat fewer of them. For the study, researchers asked participants to imagine eating 3 or 30 M&Ms, and then invited them to eat some of the candies as a taste test. Incredibly, those who imagined eating the most M&Ms (30) actually ate the least. Researchers say the findings show—contrary to popular belief—that imagining the entire process of eating a pleasure food actually reduces your appetite for it. So flex your mental muscles, and let that chocolate melt in your mind—not in your mouth.
3 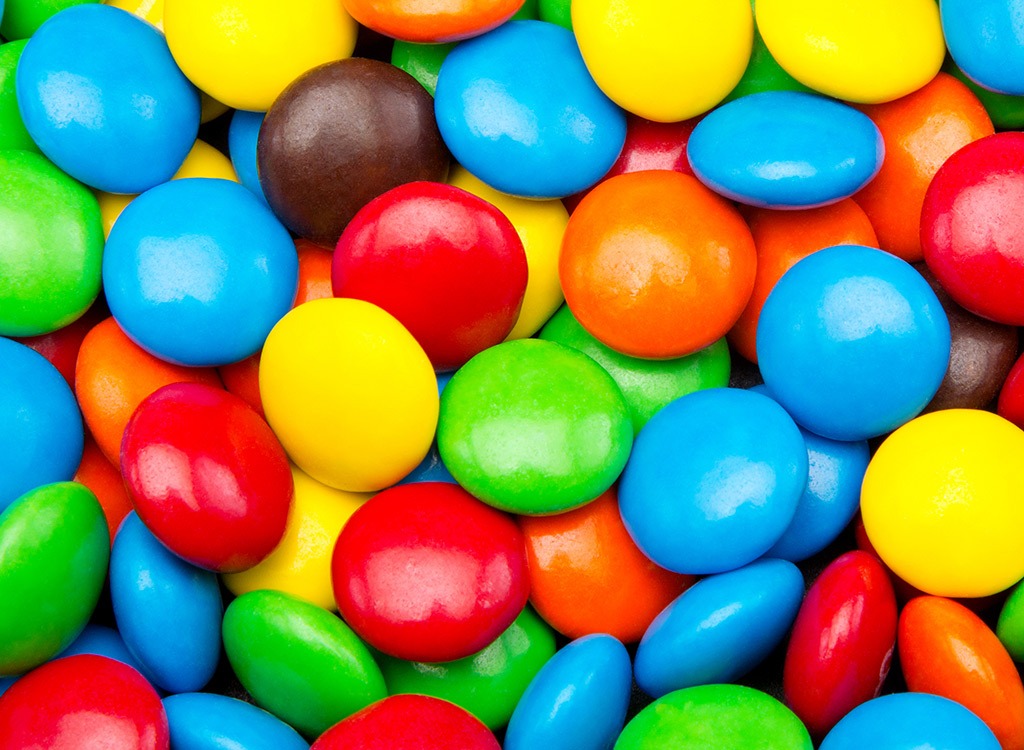 Why is it that even the most steadfast and disciplined of dieters can fall prey to temptation? According to a study in the Journal of Consumer Research, people who distort past memories of their indulgences are more likely to indulge in the future. Researchers presented participants with M&Ms and the option to eat them. After 30 minutes, participants were each presented with a bag of M&Ms. When asked to estimate the caloric content of the M&Ms presented at the start of the study, participants who had chosen to indulge gave a lower calorie estimate than those who had not eaten any. Researchers say people may distort or selectively forget past behavior in order to allow for indulgence in the present. Take steps to journal moments of indulgence and self control; even informally on a post-it or via text message, it's a process that researchers say can help us become more aware of our habits and behavior.
4 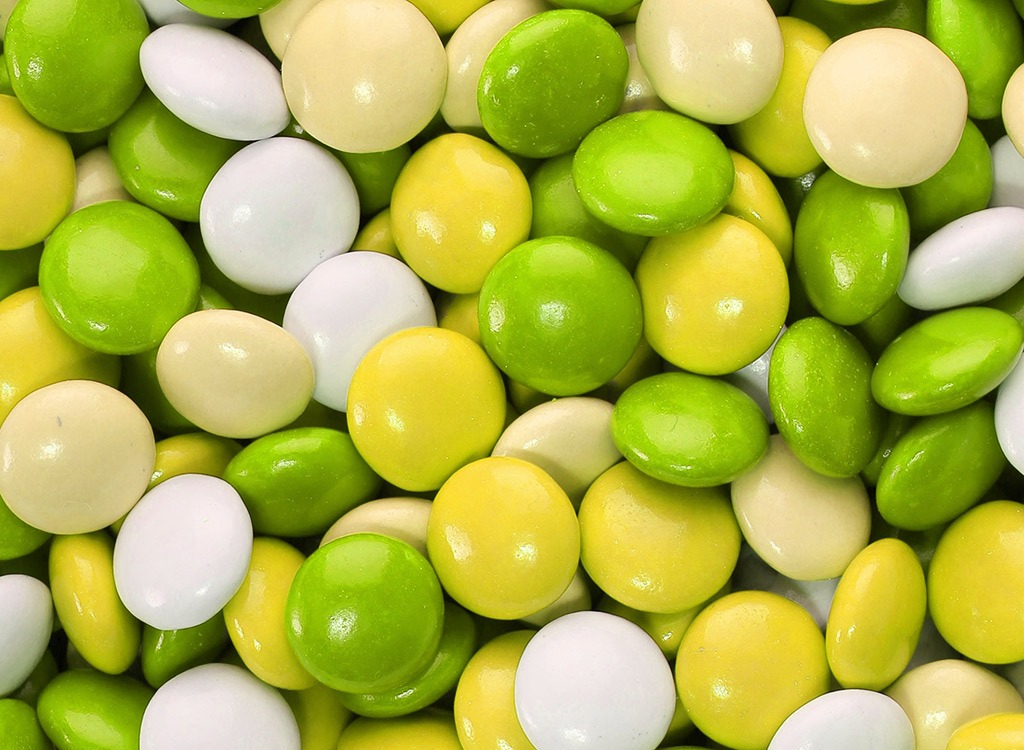 Think what you will about Richard Simmons, at least he's having fun. And, according to researchers, having fun while you exercise has significant dietary consequences. In one study, 46 adults were led on a 2 km walk around, presented as either an "exercise walk" or a "scenic walk." Afterwards, they were given a post-workout snack of M&Ms. Those thinking they had taken an exercise walk ate 206 more calories—124 percent more candies than the perceived scenic walkers. Researchers conclude some exercisers, especially beginners, have a tendency to reward themselves by overeating. Think of your next exercise workout as a fun or well-deserved break, and you'll eat less afterward.
5

We don't make mistakes, just happy little accidents. That's if we're watching Bob Ross while snacking in front of the telly; but put on an action flick, and we could be looking at a major dietary mishap, researchers say. A study published in JAMA Internal Medicine gathered 94 undergraduate students, supplied them with M&Ms and then randomly assigned them to watch 20 minutes of one of three different TV programs: an excerpt from a Hollywood action movie, the same excerpt but with no sound, and an interview program. In both instances, the Hollywood action-movie viewers ate more candy. Those in the full-volume group consumed 65 percent more calories (354.1 vs. 214.6) than viewers who watched the interview. Even viewers who watched the action film on mute ate 46 percent more calories (314.5 vs. 214.6). Researchers say the more distracting a TV show, the less attention people appear to pay to eating, and the more they eat. So turn off the TV, and cue up some slow jams instead. Restaurant studies show mellow music can can reduce calorie intake over the course of a meal by 175 calories!

If you've ever felt physically unable to resist another bite of chocolate … like you were under the influence of some kind of drug, you probably were. In fact, a study in the journal Current Biology shows the urge to overeat deliciously sweet and fatty treats stems from your brain and its production of a natural, opium-like chemical called enkephalin. For the study, researchers gave rats an artificial boost to a brain region called the neostriatum—the same brain area that becomes active when obese people see foods and when drug addicts see drug scenes—and then introduced the animals to M&Ms. Those rats gorged themselves on more than double the M&Ms than they would otherwise; and enkephalin surged when rats began to eat the chocolates. Study authors say the findings could be analogous in humans and help scientists better understand the drive for over consumption and addiction. Chocoholics beware! It's almost impossible to "just have a bite," so keep large bars and bags of the house, and indulge your craving with a single, individual treat instead.

Out of Sight, Out of Mouth 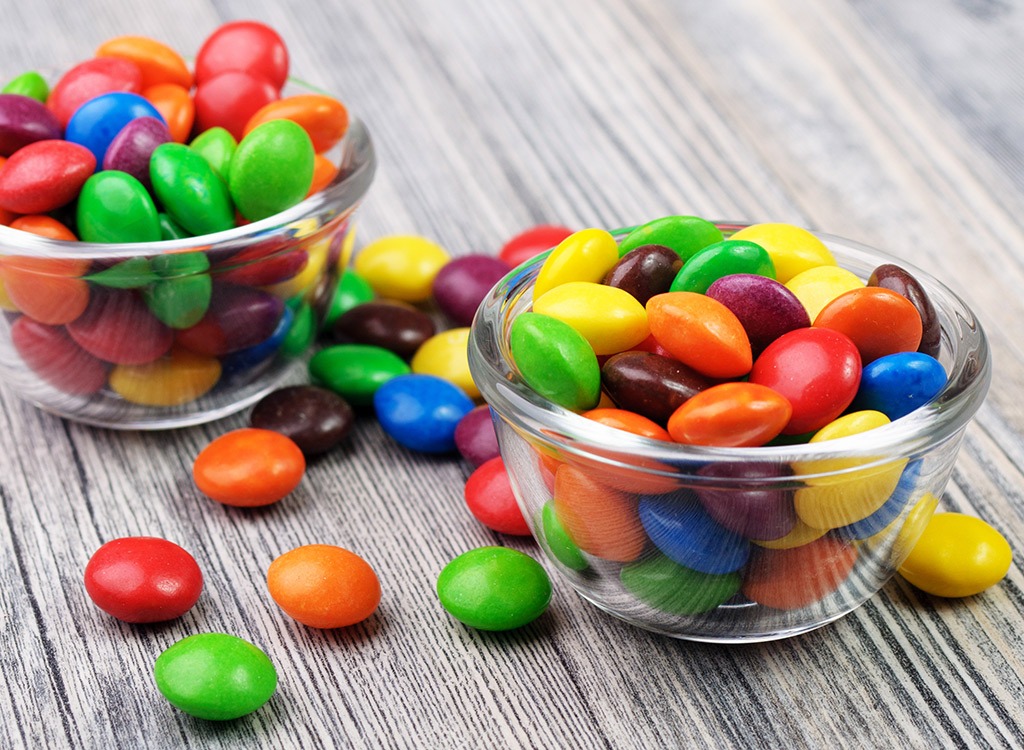 If you see it, you'll eat it. If you don't see it, you'll still eat it—but not so much. That's what a study at Google's New York office, dubbed "Project M&M" found. Office managers discovered that placing the chocolate candies in opaque containers as opposed to glass ones, and giving healthier snacks like nuts and figs more prominent shelf space, curbed M&M intake by 3.1 million calories in just seven weeks. A similar study published in the Journal of Marketing found that people ate 58 percent more M&Ms when they were presented in transparent packages than in opaque ones. So Google your pantry! Hide your vices in opaque jars and tins at the back of the shelf, and move healthier snacks front and center.
8 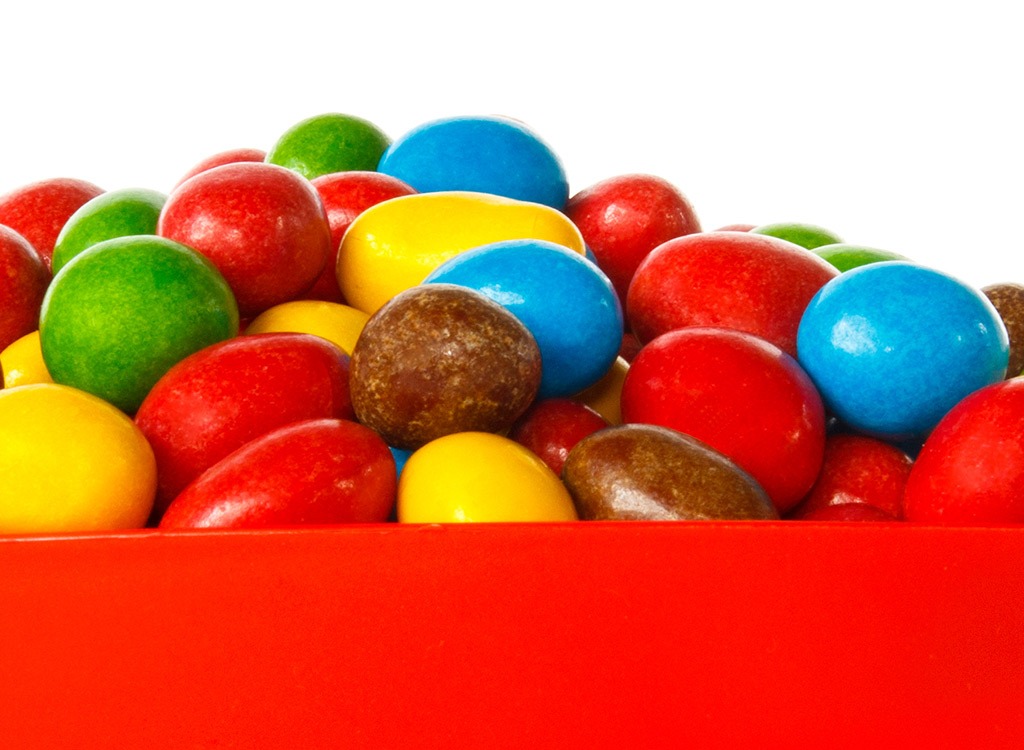 Everyone has that one friend who seems to defy all metabolic laws and maintain a thin figure while eating whatever they want. News to further annoy you: A study in the Journal of Consumer Research that examined how other peoples' weight and food choices influence how much we eat, found dining in the company of thinner friends can actually make you fatter. Researchers had college students watch a movie and snack on M&Ms with either a skinny or overweight companion. With a thin "confederate," college students ate almost twice as many M&Ms than when snacking with heavier company. If you are serious about your weight loss goals, be wary of the influence your friends—thick or thin—have on your food choices, and consider activities that don't involve food or drink.
9

Portion-controlled snack packs sound good in theory, but a recent study in the Journal of Consumer Research suggests tiny food packages like the popularly marketed "100 calorie packs," may actually cause dieters to consume more than they would otherwise. For the study, researchers put 200 calories of regular-sized M&Ms into one large plastic bag and 200 calories of mini-M&Ms into four mini packs. Even though the amount of calories was the same, study participants (and described "restrained eaters") perceived the small packages to be more diet-friendly, and ended up eating multiple packets, and more calories overall, than those given a regular-sized package. Portion control is a necessary skill for any dieter, but beware the health halo: there's nothing virtuous, or controlled, about eating your way through a box of 100-calorie packs.