You can absolutely have too much of a good thing, especially when it comes to weight loss.

Sure, you've completely revamped your diet in an attempt to be healthier this year, swapping out white bread for wheat and chips for carrot sticks. If anyone were to peek into your fridge or pantry you'd be happy to show off your healthy stock.

However, buying the right things is only half of the battle. The real challenge is knowing how much to put on your plate. Too much healthy fat is still too much fat and excess calories are still excess calories–and, yes, they're still going to widen your waist.

Before you run to your kitchen in a panic, there's no reason to dump these foods from your diet completely. However, if you want to hit those weight loss or fitness goals this year, it would serve you well to keep a measuring cup or spoon on deck.

The list of health benefits of beans is long, but don't be so quick to load up: Although they do offer a significant amount of nutrients–and plant-based protein–they're considered a high-calorie food. "Beans are very easy to take a large portion of, and they're fairly calorie dense. They're definitely something I think people can unknowingly get many more calories from than they're expecting," says Isabel Smith, MS, RD, CDN, registered dietitian and founder of Isabel Smith Nutrition. Especially if beans are an add-on to your meal, stick to no more than half-cup serving, which will contribute around 100 calories to your dish.

Keeping the box of Wheaties within arms distance at breakfast is common. The problem with blindly pouring yourself a bowl of cereal is that you can't really tell how much you're eating. Bowls are all different sizes and most aren't as small as a single portion of cereal should be. "It's completely unrealistic for people to carry around measuring cups and spoons, but it's always a good idea when at home to measure out portions of things like beans, grains, nuts, cereals and breads in your own dishware and visually see what it looks like," says Smith. Avoid high-sugar cereals, and stick to dishing up the serving size on the box before putting the box back in the pantry. That way if you're actually hungry you will get up and pour yourself another serving rather than mindlessly grabbing the box out of habit or just because it's there. 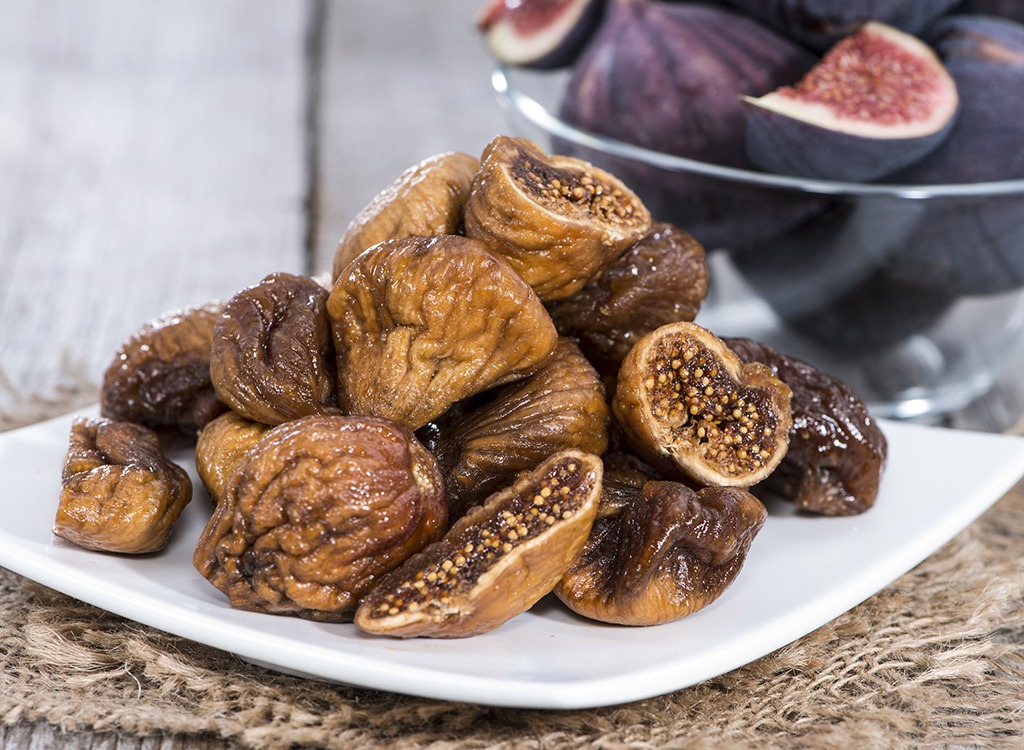 There's a reason dried fruit is so tasty—it's full of sugar! Yes, it's natural sugar (make sure you're not buying the kind with added sugar), but your body can't tell the difference. It's a lot easier to overdo dried fruit than it is regular fruit simply due to the smaller size. A few dried cranberries in your salad won't do much harm, but are you really counting each one that you toss in? "I find that salad bars are typically places that we can end up piling on sweet dried fruit and other higher calorie items. I tell people to choose 2-3 items they want (nuts, cranberries, croutons) and have one tablespoon of each. Make the rest of your salad colorful vegetables, along with some protein," says Smith. One tablespoon of unsweetened dried cranberries is about 25 calories, which is enough to bump up the flavor but not the size of your jeans.
4

Red wine has been touted as the "healthy" alcoholic drink thanks to its resveratrol content—a heart-healthy nutrient. However, while it may be the better pick when pinned up against sugary mixed drinks or belly-bloating beers, it doesn't give you permission to down an entire bottle in one sitting. "The average pour is much more than the recommended serving size of 5 oz. There's considerable sugar and calories in a very large pour of wine," says Smith. A glass of red wine at dinner is fine, just watch your heavy hand if you're watching your weight.

Gluten-free does not equal calorie-free! Gluten-free products often get the reputation of being healthier than their wheat-containing counterparts, however, that's not necessarily true. Gluten-free pasta contains just as many calories per serving as regular pasta and some varieties undergo more processing, which strips them of their fiber content. "You should measure gluten-free pasta the same way you do regular pasta—that's about two ounces or a quarter-cup—and look for gluten-free pasta with at least 2-3 grams of fiber per serving to help boost feelings of satiety. In some cases, regular pasta may be better than some of the more processed gluten-free choices that have virtually no protein or fiber." says Smith. Smith recommends Ancient Harvest Black Bean and Quinoa Blend, which has seven grams of fiber and 12 grams of protein per serving. Other healthy favorites include: Lundberg Brown Rice Pasta and Explore Asian Black Bean pasta.

If you don't have any kind of lactose intolerance, cheese can be a healthy part of your diet—the real stuff, that is. Even though you ditched processed cheese and picked up a fancy five-year Gouda from the cheese shop downtown, you've still got to be strict with portions. "A cheese serving should be equal to about four small cubes, each equal to the size of a dice. Cheese can be an easy food to pack on the extra calories, saturated fat and even sodium," says Smith. Rather than posting up next to the cheese platter at your next party, put a few cubes on your plate and move on. And hey, if you keep your cheese quota in check during the appetizer round, you'll have more wiggle room to spring for dessert later.

White sugar and artificial sweeteners are, no doubt, ill suited to healthy eating and weight-loss regimens—but you know that already. As a result, honey and other natural sweeteners like agave or maple syrup have become pantry staples because these sweets actually have some health benefits. "Yes, honey is healthful, boasts antibacterial properties and can soothe a sore throat, but the amount of honey you consume should be moderated. Stick with about one tablespoon per serving that offers about 60 calories," says Smith. No need to go completely a-wall on your honey jar, just cap it at one small spoonful and call it a day.