It's things everyone does, but now, you know it's time to stop these habits if you want to prevent packing on the pounds.

A long, long time ago, a completely wrong-headed idea started being passed around America's dinner tables: Eating fat makes you fat. Well, it's time to erase that from your mind as it's simply wrong. Eating fat won't make you gain weight, any more than eating money will make you rich. Consuming foods that are high in calories can lead you to pack on the pounds, and most "low-fat" or "fat-free" foods actually have just as many calories as their full-fat versions, because of added sugar and chemicals.

And there's no debate on this one: Since we made "cut down on fat" our favorite food craze roughly 30 years ago, the U.S. obesity rate has doubled. Among children, it has tripled.

But it's just one of many bad habits that can be causing weight gain that starting now, you will turn into a "slim-down" habit. All you need is a pinch of resolve and a few new routines. Here are the 15 daily habits that are causing you to gain weight you can replace right now. And be sure you're stocking up on The 7 Healthiest Foods to Eat Right Now, too.

It sounds crazy, but stop buying foods marketed as low-fat or fat-free. Typically, they save you only a few calories and, in doing so, they replace harmless fats with low-performing carbohydrates that digest quickly—causing a sugar rush and, immediately afterward, rebound hunger. Researchers from the University of Alabama at Birmingham found that meals that limited carbohydrates to 43 percent were more filling and had a milder effect on blood sugar than meals with 55 percent carbohydrates. That means you'll store less body fat and be less likely to eat more later.

Working Out Every Day

Being committed to your workout routine is great, but if you're not giving your body any time to rest and recover. This could lead to an injury, which then ends up halting your progress altogether, according to fitness and nutrition expert Jay Cardiello. He suggests taking one or two days off per week.

Sleeping Too Little Or Too Much

According to Wake Forest researchers, dieters who sleep five hours or less put on 2½ times more belly fat, while those who sleep more than eight hours pack on only slightly less than that. Shoot for an average of six to seven hours of sleep per night—the optimal amount for weight control.

Breadsticks, biscuits, and chips and salsa may be complimentary at some restaurants, but that doesn't mean you won't pay for them. Every time you eat one of Olive Garden's free breadsticks or Red Lobster's Cheddar Bay Biscuits, you're adding an additional 150 calories to your meal. Eat three over the course of dinner and that's 450 calories. That's also roughly the number of calories you can expect for every basket of tortilla chips you get at your local Mexican restaurant. What's worse, none of these calories comes paired with any redeeming nutritional value. Consider them junk food on steroids.

The average American guzzles nearly a full gallon of soda every week. Why is that so bad? Because a 2005 study found that drinking one to two sodas per day increases your chances of being overweight or obese by nearly 33 percent. And diet soda is no better. When researchers in San Antonio tracked a group of elderly subjects for nearly a decade, they found that compared to nondrinkers, those who drank two or more diet sodas a day watched their waistlines increase five times faster. The researchers theorize that the artificial sweeteners trigger appetite cues, causing you to unconsciously eat more at subsequent meals.

In a 2011 national survey from the Calorie Control Council, 17 percent of Americans admitted to skipping meals to lose weight. The problem is, skipping meals actually increases your odds of obesity, especially when it comes to breakfast. A study from the American Journal of Epidemiology found that people who cut out the morning meal were 4.5 times more likely to be obese. Why? Skipping meals slows your metabolism and boosts your hunger. That puts your body in prime fat-storage mode and increases your odds of overeating at the next meal.

If your body has one major flaw, this is it: It takes 20 minutes for your stomach to tell your brain that it's had enough. A study in the Journal of the American Dietetic Association found that slow eaters took in 66 fewer calories per meal, but compared to their fast-eating peers, they felt like they had eaten more. What's 66 calories, you ask? If you can do that at every meal, you'll lose more than 20 pounds a year! Looking for more helpful tips? Well, your ultimate restaurant and supermarket survival guide is here!

Watching Too Much TV

A University of Vermont study found that overweight participants who reduced their TV time by just 50 percent burned an additional 119 calories a day on average. That's an automatic 12-pound annual loss! Maximize those results by multitasking while you watch—even light household tasks will further bump up your caloric burn. Plus, if your hands are occupied with dishes or laundry, you'll be less likely to mindlessly snack—the other main occupational hazard associated with tube time.

A study in the Journal of Public Policy & Marketing shows that compared to ordering a la carte, you pick up a hundred or more extra calories by opting for the "combo" or "value meal." Why? Because when you order items bundled together, you're likely to buy more food than you want. You're better off ordering your food piecemeal. That way you won't be influenced by pricing schemes designed to hustle a few more cents out of your pocket.

Eating Portions That Are Too Big

Even if what you're making is overall healthy, you still want to make sure you're practicing portion control and not end up overeating. So what should you keep in mind? Half of your plate should be filled with veggies and the other half should have a serving of lean protein, a fist-sized serving of grains, and a bit of fat.

Not Having the Right Snacks Around

Snack cravings hit everyone, so you want to be prepared. Not having the right kind of snacks on hand can lead to binging on all the wrong things. So you'll want to stock up on healthy snacks such as almonds, fruit, and low-sugar protein bars so you're not tempted to go for the chips or candy that are most likely lingering close by.

Keeping the Kitchen Open All Night 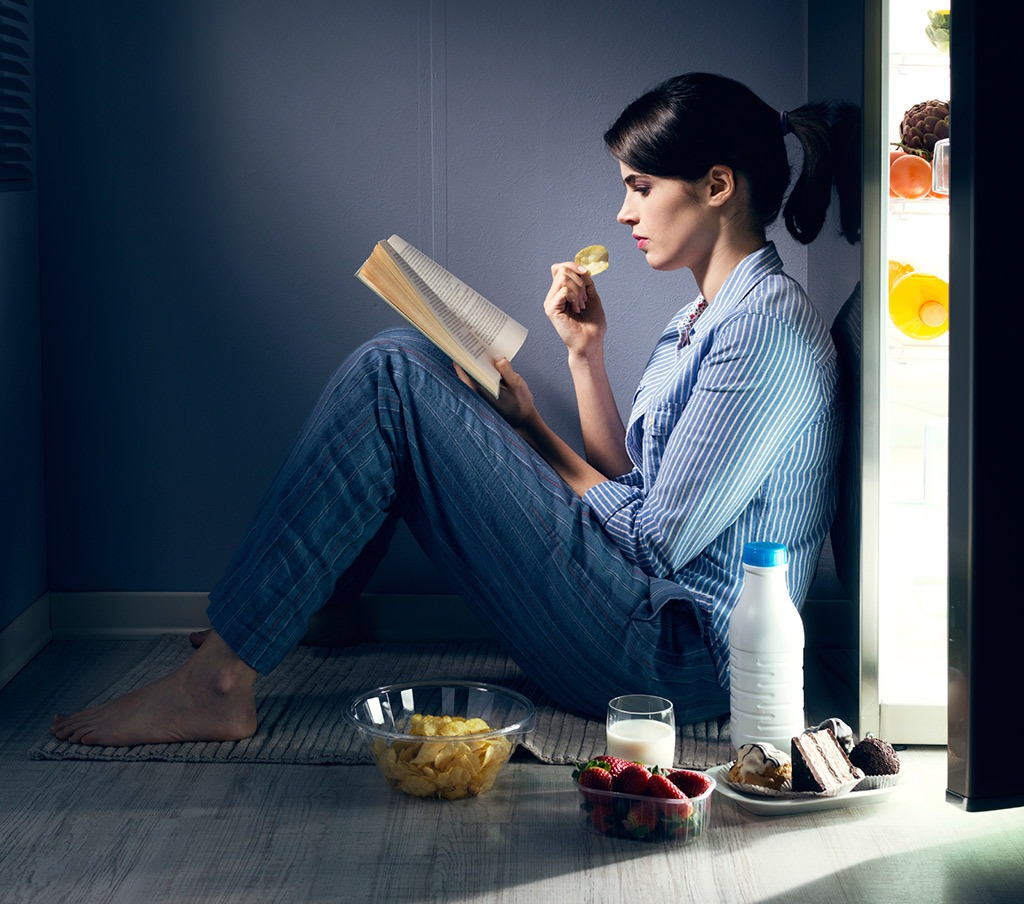 Once dinner is served, it's time to close up the kitchen for the night. Sorry, but no midnight snacks here! A study in the journal Cell Metabolism found that mice who were only had access to food for eight hours during the day compared to the mice who were able to eat whenever they wanted were leaner, and both groups of mice ate the same amount of calories. So closing your kitchen and going into a nighttime fast could help you lose more weight.

It's no secret that many of us sit a lot throughout the day, especially for those whose job requires them to work on a computer. And after you're done working, you might head to the couch to watch some TV, which means more sitting. The less you're moving, the more likely you are to pack on the pounds. So what can you do instead? Get moving, even if it's just something minor. A study in the Clinical Journal of the American Society of Nephrology found that a two-minute walk every hour can actually help offset the effects of too much sitting.

Sleeping With the Light On

Sleep with a light on? This nightly habit could be causing weight gain. A study published in the American Journal of Epidemiology found that the subjects who slept in the darkest rooms were 21% less likely to be obese than those sleeping in the rooms with the most light.

Using Your Phone In Bed

Yes, that means your phone is a problem too! The blue light from your phone messes with melatonin, the sleep-rhythm-regulating hormone that lets your brain know it's time for you to go to sleep. You're going to have a harder time falling asleep and getting an adequate amount of quality sleep every night is essential when it comes to staying on course and not gaining weight.

Eat This, Not That!
Inspired by The New York Times best-selling book series, Eat This, Not That! is a brand that's comprised of an award-winning team of journalists and board-certified experts, doctors, nutritionists, chefs, personal trainers, and dietitians who work together to bring you accurate, timely, informative, and actionable content on food, nutrition, dieting, weight loss, health, wellness, and more. Read more about Eat This
Filed Under
Weight Gain // Weight Loss Tips